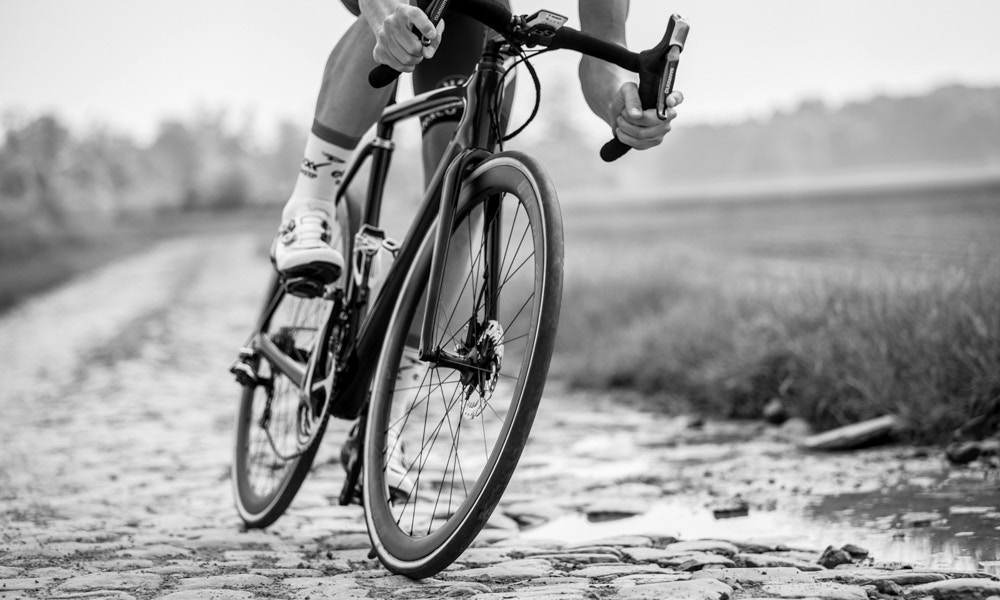 It shares its name with arguably the hardest, roughest race on the WorldTour calendar, so it's only fitting that the Specialized Roubaix should come up with the technology to be at one with the race. The latest iteration of the endurance classic race machine is lighter, smoother and faster than anything Specialized have produced before, and we've got a first look for you.

In order to understand what it takes to make a comfortable bike that doesn't sacrifice speed, Specialized developed the 2017 Roubaix with McLaren Applied Technologies, yes, that McLaren. The two company's collaborated to understand what “smooth” actually meant by analysing how riders and road surfaces interact and the impact road vibrations have on speed.

As well as overhauling the Roubaix, the women's specific Ruby endurance bike also gets an update. Specialized say the new Roubaix and Ruby feature "proprietary technologies that will redefine comfort, speed, and handling".

We've broken down the top ten things you need to know about Specialized latest releases that are set to shake-up (or smooth over?) the endurance road bike category.

1. It has suspension, not Zertz The new Roubaix and Ruby have a front end suspension system that allows for an amazing 20mm of travel. If you're not familiar with the term, 'travel' is commonly used in the mountain bike world and refers to movement at the front or rear of the bike. 20mm of travel or movement provides exceptional shock absorption capabilities that has rarely been seen on road bikes. Movement is fully active allowing it to work whenever you hit a bump in the road or common across a rough surface, in other words it's always working.

The new technology is called 'Future Shock' and is present on all models up from the 'Elite'. The system works via a cartridge that sits inside the steerer tube with a spring that responds to vibration and impact. Even more impressive is the ability to customise the tension in the spring to 'firm', 'medium' or 'soft' to best suit your preferences or the terrain. Each bike will come with three interchangeable springs for you to decide on and swap as your see fit. An added benefit of the 'Future Shock' front suspension system is improved traction according to Specialized. The improved vertical compliance allows the bike to move when it hits small bumps instead of displacing the tyre from the road. Keeping more rubber on the road equates to more traction. Specialized claim a 5.1% increased vertical compliance over the Roubaix SL4 which should result in a significant improvement on road feel. All of this comes while Specialized have removed its long-standing 'Zertz' elastomer shock-absorbing technology from these new models.

2. No suspension at back, but there’s two key points of flex. Specialized priortised suspension in the front of the bike but further aiding comfort are two technologies at the rear of the bike. These technologies aren't suspension based but allow two points of flex to improve comfort. It carries over the current ‘CG-R’ (CobbleGobbler) seastpost, which has a unique design at its head to absorb impacts. Secondly, the new ‘Drop Clamp’ sees the seatpost clamp moved to where the seat stay contacts the seat tube (65mm lower). Effectively this allows the seatpost to flex in a long arc than if it were clamped at a traditional, higher point. Specialized have gone all in with regards to disc brakes. The 2017 line-up only features disc brakes (cheaper SL4 excluded), with full carbon fork and rear mounts which is a significant step in the evolution of the road bike. No rim brake version of the Roubaix will be offered in 2017 which has enabled engineers to play with the fork and rear triangle. As a result, tyres up to 32mm wide will be accepted which will further smooth out road vibration.

Interestingly, a benefit of the allowance for larger tyres is a lower bottom bracket height. The lower position essentially lowers the centre of gravity of the bike forming a more stable base and improving handling. Utilising 'Future Shock', the 'CG-R seatpost' and 'Drop Clamp' allowed the engineers at Specialized some freedom with frame design, lay up and weight. As well as trying to create a 'smooth' bike, they set about trying to create the lightest frame they've ever made, and they succeeded.

The frame and fork is noticeably sleeker than the previous Roubaix. This is attributed to a combination of the lack of Zertz inserts and suspension systems at the fork and seat stays which negates the need for any other compliance measures throughout the bike. As a result the new Roubaix more closely mirrors the look of the Tarmac and sheds considerable weight to previous Roubaix's.

The new Roubaix S-Works frame comes in at 900g and a non-S-Works Roubaix frame weighs 1,050g compared to the 966g Tarmac frame. That means the Roubaix is now the lightest road bike frame Specialized offer, pretty impressive for a comfort first endurance bike. There is a slight asterix next to these numbers and that is the CG-R seatpost and new Future Shock suspension system adds to the total weight, so a complete Tarmac build will still come out lighter than a complete Roubaix with the same compoments. The S-Works Roubaix with SRAM eTap Disc is claimed to weigh 7.2kg. It's worth knowing as good as this new technology is, you'll have to spend some cash to get it. The 2017 range still features the previous Zertz vibration system for entry level models (SL4) with the new design and technology only available from 'Elite' models and up.

And while we're talking price, here are the AU prices for the entire range. The integration in bikes seems to know no bounds, Specialized continues to develop its integrated storage system in order to do away with saddle bags or bulging jersey pockets. The 'SWAT' system as it's known is a small storage system that attaches to the downtube via braze-on to store tools and accessories you'd normally tuck away in your saddle bag. The new system is only available for 'Pro' and 'S-Works' models. It's a feature already successfully adopted in the American brand's mountain bikes. A quick scan over the new Roubaix and Ruby reveal the distinct handlebars we first saw on the Venge Vias are apparent. A quick background catch up on the Venge Vias, Specialized claim the new Venge frame along with Roval CLX 64 wheels, S-Works Turbo tyres, S-Works shoes, Evade helmet and skinsuit would save five minutes over a 40km course. The unique 'Aerofly' handlebar is an integral part of that with its negative 17 degree stem which is said to optimise the aero profile, while a positive 25mm rise on the handlebars provides some respite from the aggressive position.

The handlebars on the Roubaix feature the same riser arrangement with a 15mm rise, 125mm drop and 75mm reach. The new Roubaix has had plenty of updates to its geometry from the SL4 Roubaix in a bid to make it faster while the new suspension system takes care of the comfort. Almost every key measure is different despite the stack and reach staying similar. For a 56cm frame the new stack is 7mm greater than the SL4, while the reach is 2mm less. Minor variances but some other key changes highlight the new found performance focus of the Roubaix.

The wheelbase of the new Roubaix is 993mm vs the SL4's 1011mm, a significant decrease which along with the steeper headtube angle, shorter headtube length and lower bottom bracket should sharpen up the handling. The headtube is 1 degree steeper, headtube is 40mm shorter, and the bottom bracket is 45mm lower.

The size-specific design that features on the Tarmac range now makes its way to the Roubaix and Ruby. Traditionally a 56cm frame would be used by manufacturers to develop a stiff, compliant and lightweight frame. Once those targets were hit, the 56cm frame was either 'shrunk' or 'grown' to create other sizes, not accounting for changing geometry, tube lengths and differing ride experience. As the size of the frame shrunk, it would typically get stiffer because of the smaller triangles and tubes, conversely bigger frames would become more flexible, inherently changing how the bike was intended to ride and feel.

To remedy this Specialized developed the 'Rider-First Engineered' approach which took a look at each individual frame size to assess ride characteristics and engineer each bike to feel as it was intended. Up until now the technology hasn't featured on the Roubaix and Ruby, but the 2017 line-up changes all of that. A rider on a 58cm frameset should get the same ride experience as a rider on a 50cm. The Ruby has been designed with the same technological advancements as the Roubaix but is specifically tailored for women with adjustments to key touch points and even frame design. The frame, components, saddle, cranks and handlebars have all been adapted to better fit female riders, improving ride quality and road feel. Not content with two new bikes, Specialized have also released a new set of wheels. The latest wheels from Roval are said to be one of the lightest carbon clincher wheels they have ever made. The CLX 32 wheels stick with the modern trend for wide width to accommodate wider tyres and provide better comfort. The inner rim width is a generous 22mm, and a disc version will appear on the new Roubaix and Ruby suggesting it is tough enough for the cobbled classics. The rim is optimised for disc brakes, making them lighter and the additional width improves aerodynamics too. Despite being shallower, they're said to be aerodynamically faster than the previous CLX 40. While we’re excited to learn more, details are scarce for these currently. 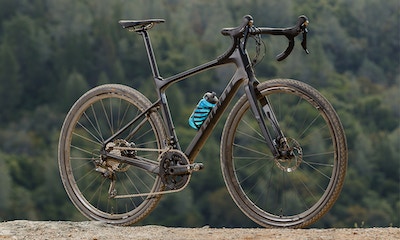