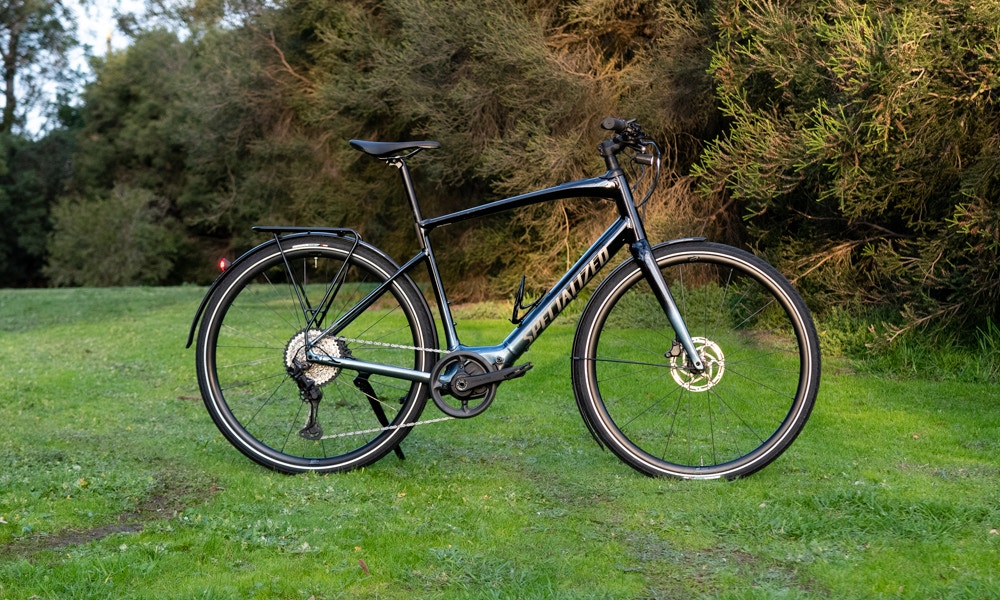 Almost a year after debuting the SL1.1 drive system in the sublime Turbo Creo SL, trickle-down economics has seen both the motor and battery system make it’s way to the urban commuting scene. With thanks to Specialized Australia, we were able to get our hands on a Turbo Vado SL 5.0 EQ before the launch a month or so ago and put it through its paces.

So without further ado, join us as we take you through our thoughts on the all-new Specialized Turbo Vado SL 5.0 EQ e-bike.

Who’s it For?: The savvy commuter looking for a refined super commuter e-bike with all the bells and whistles.

What We Liked: An integrated lighting package that worked, sleek aesthetic, the light weight, excellent range, and linear power delivery.

What We Didn’t: Drive unit isn’t the quietest, personal disagreement with the stock saddle choice, and the fact we had to give it back. 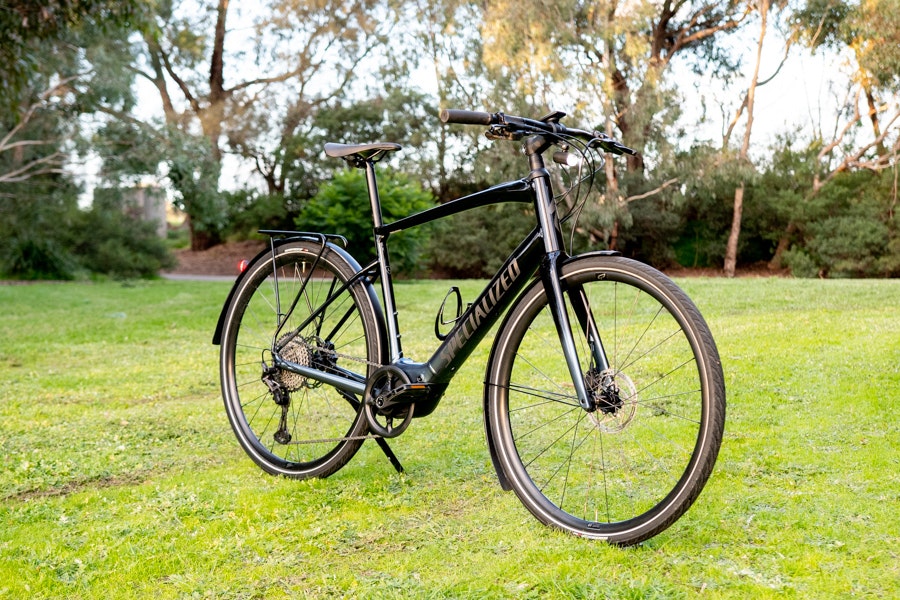 At the heart of every bike is its frame, and in the case of the Vado SL, it’s heart comes in the form of an E5 aluminium frame. It’s the same grade of aluminium found on the American outfits Allez road bike and entry-level Diverge gravel and Stumpjumper mountain bikes to name a few, so not only is it light, but it’s also rugged.

With the Turbo Vado SL, it’s clear that the design team behind the bike have made an effort to cleave unnecessary weight out of the frame, evident by the dropped, pencil-thin rear seat stays and carbon front fork. The bike as a whole is much sleeker and more slight aesthetically than the regular Turbo Vado, with the silhouette of the bike more akin to a flat bar road bike than that of a rugged hybrid. 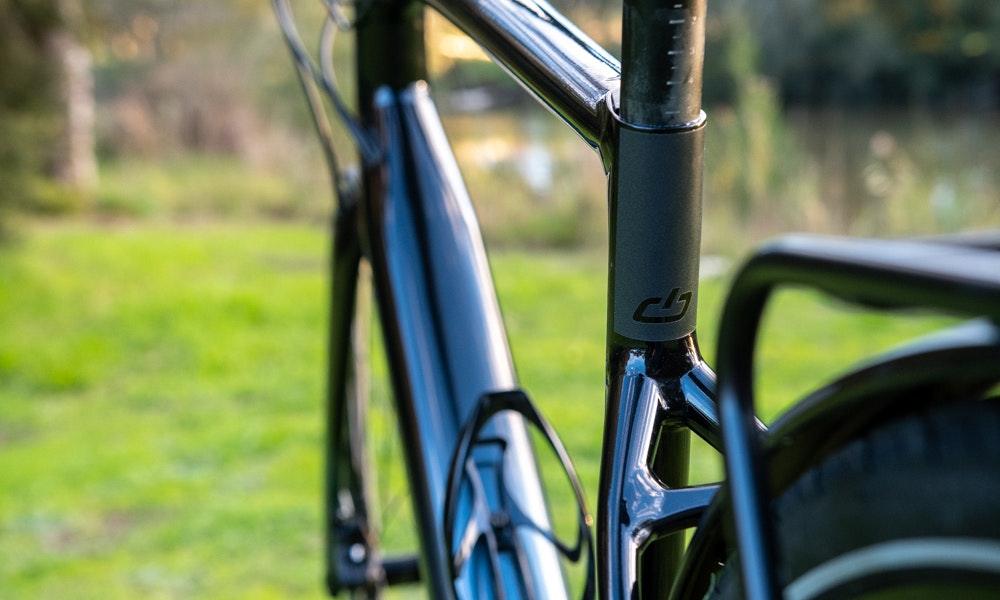 The result is an e-bike that tips the scales at less than 15kg (Size S). Our size large tester weighed in at an impressive 16kg flat, that’s with pedals and all of the features that come as standard on the EQ models fitted to the bike, more on that later.

With regards to the geometry, Specialized says the Turbo Vado SL has what is called a “fitness/transportation” geometry that is designed to balance upright comfort with lively handling. With a 415mm long reach and a 660mm stack height on our test bike, the geometry leans more towards a fitness bike, rather than a sedate commuter. That’s not to say the fit is super aggressive by any means; it’s just better suited to those wanting a more spirited riding experience. 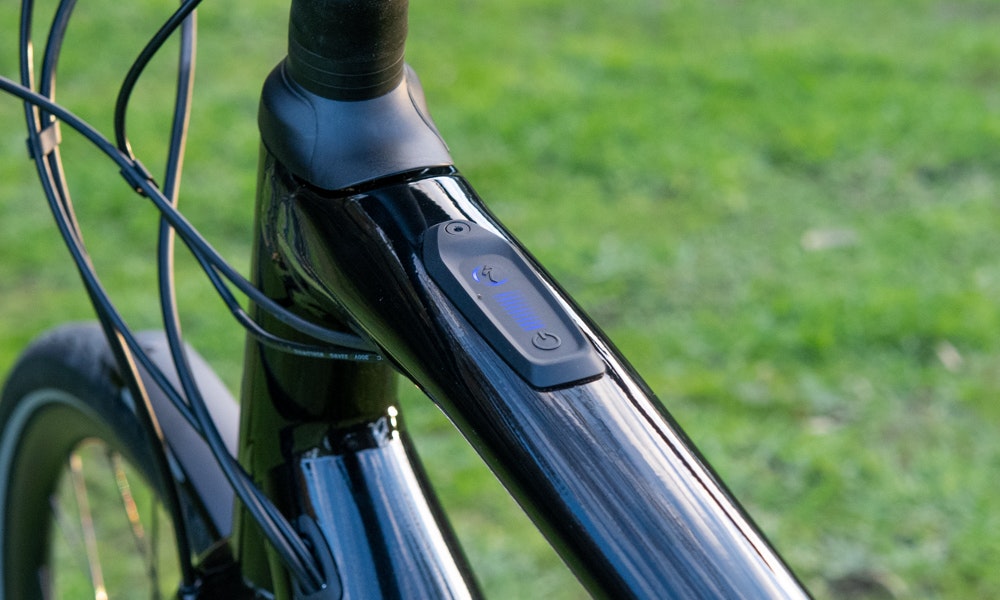 As is the case with all Specialized E-Bikes, the drive unit and battery system fitted to the Vado SL is an in house affair and comes in the form of the SL1.1 drive system. The 1.1 has a peak output of 240watts and 35Nm of torque, which given the lighter weight of the bike as a whole is plenty powerful enough to propel riders up just about any pinch you’ll encounter.

The drive unit is backed by a fully integrated 320Wh downtube battery and is compatible with an optional range extender. Specialized claim that while the battery is smaller (and thus more lightweight), the frugal demands of the system as a whole make for a total range of 130km per charge. Specialized claim that from empty the included charger will replenish the battery in three hours, we found this to be spot on during our time with the Vado SL.

Equipped with All You Need 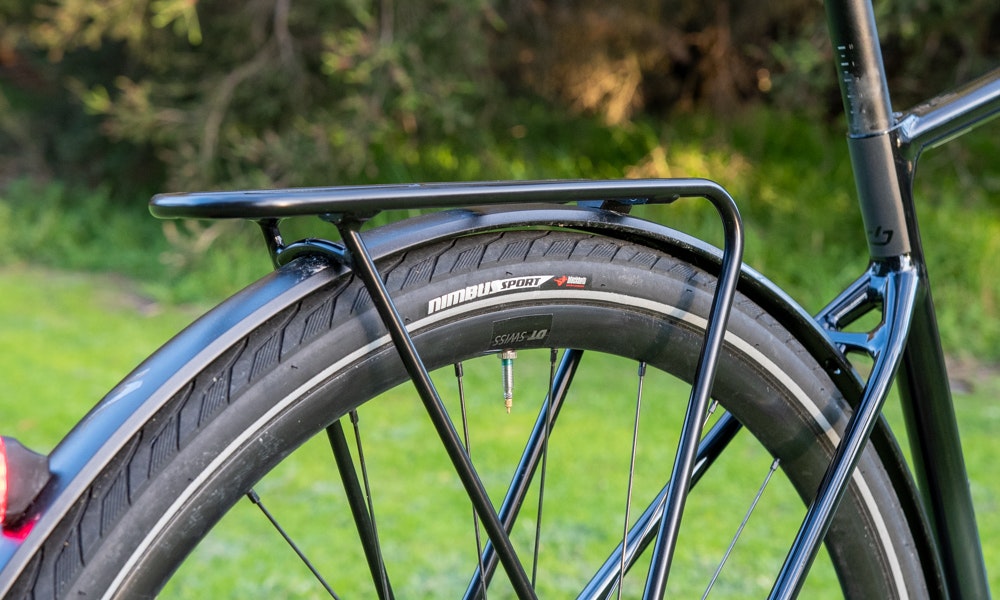 While the Turbo Vado SL is available sans accessories globally, in Australia, we receive the EQ version of the bike. EQ simply stands for equipped and means that riders score integrated lighting front and rear, fenders front and rear, a RackTime rear rack with 20kg of load-carrying capacity, an integrated turbo connect display trip computer and a kickstand as standard.

It’s worth noting that while other super commuters include similar accessories as standard, the added extras on this steed are of excellent quality. Refined, rugged and designed to last as long as the bike will rather than just being slapped on as an afterthought, this truly is a ride that needs nothing more than a rider perched on its saddle. 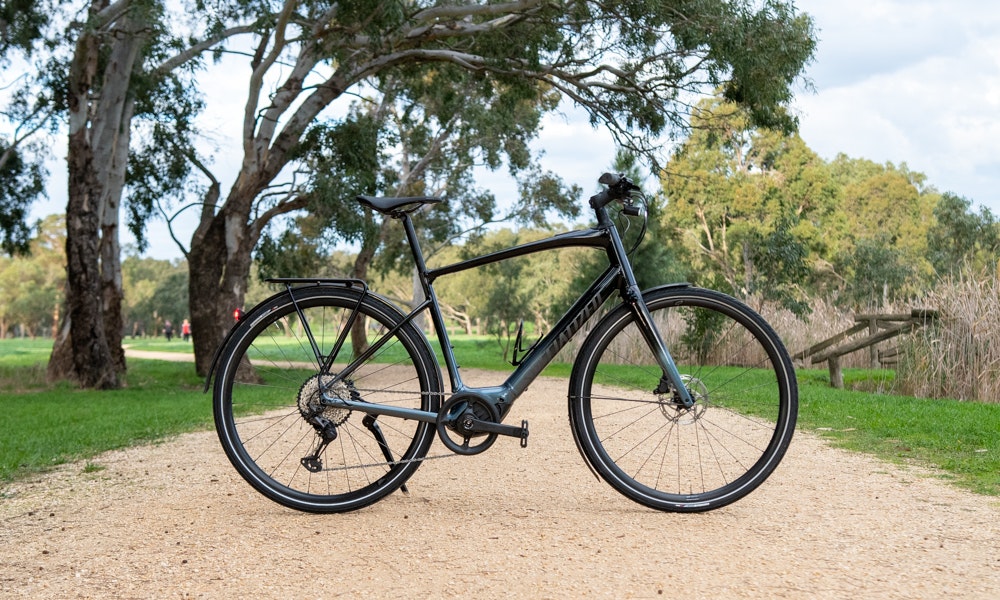 Having been fortunate enough to test more than a few e-bikes over the last few years, when specialized reached out and offered the Vado SL for review, we were eager to throw a leg over and see what the “next big thing” in the e-bike market i. After all, it makes perfect sense, make the e-bike light enough not to need a big heavy battery and powerful drive unit to shift the girth, and the result should be a bike that doesn’t feel like an e-bike until you need it right? I’m happy to report that this is absolutely the case.

The lighter weight of the frame makes for an e-bike that feels no different to any other hybrid, or flat bar commuter we’ve tested before, except for the fact that you have an efficient motor at the bottom bracket to give you that extra nudge up any hills you encounter on your daily commute. 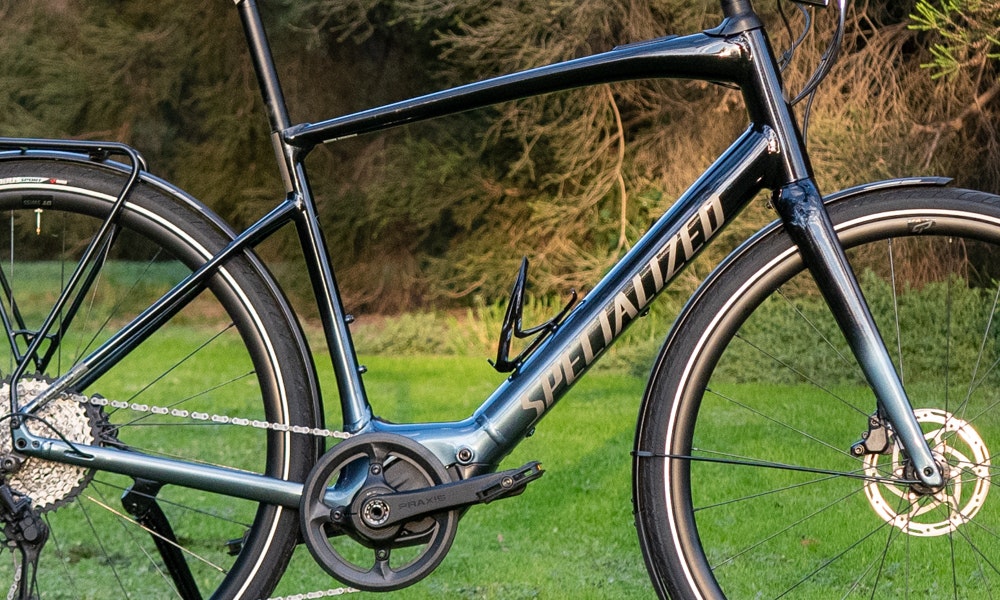 Over the test period, the bike impressed with it’s versatile and adaptable geometry, it’s equally at home on spirited fitness rides, as it is cruising down to the shops on the milk and bread run. Low-speed manoeuvrability, helped by the generously wide 660mm flat bar and 71.5º headtube angle, was better than just about any e-bike we’ve tested in the past. At the same time, the stability at speeds approaching 60-70kph on some punchy descents was seriously impressive. The only gripe I had from a fitting point of view was the stock saddle didn’t agree with my personal preference wider firmer perches. But then again, saddle preference is as unique as musical taste to this is hardly a primary concern for the masses. 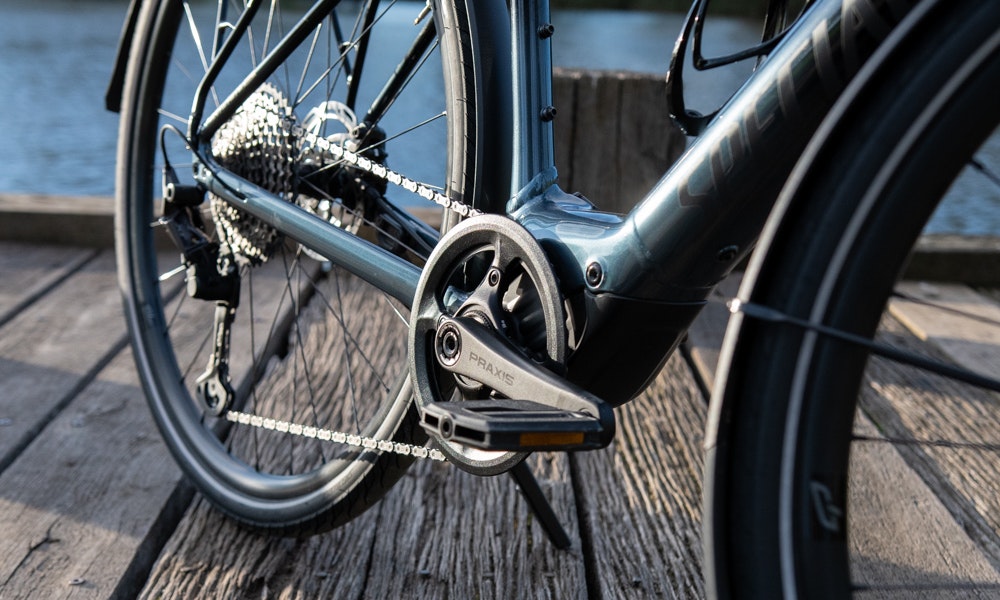 The analogue features of the bike came courtesy of Shimano in the form of its XT/SLX 12-speed groupset and hydraulic disc brakes. In typical Shimano fashion, they were faultless throughout the test period while the powerful stoppers had more than enough bite to bring the Vado SL to a halt. The FutureShock 1.5 suspension system in the headtube made traversing the urban landscape a breeze. It’s constant 20mm of travel absorbing sudden impacts from tree roots, potholes and the like with ease. The DT-Swiss wheelset rolled effortlessly, while the 38mm Nimbus Sport Reflect II tyres soaked up a generous amount of road buzz.

The drive unit is the star of the show here. The SL1.1 motor, while not the quietest e-bike motor on the market, feels much more willing than it’s rather sedate specifications would suggest. The power is linear in its delivery and provides enough output to suit just about any terrain you’re likely to encounter on a bike such as this. The range offered by the integrated battery system was consistent with the manufacturers’ claims, we averaged 110km to a charge throughout the testing period. 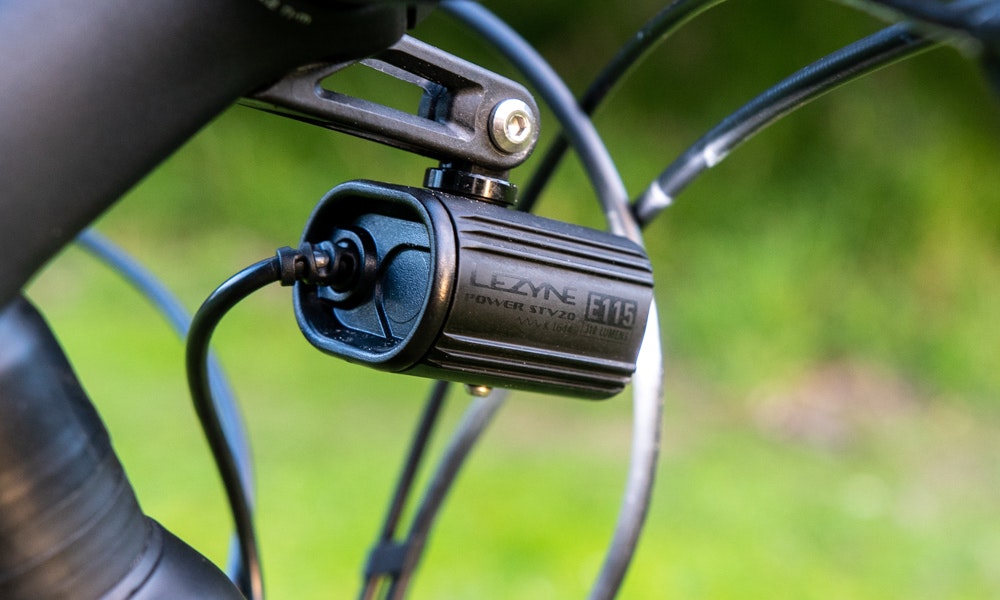 Moving to the rest of the build kit and there’s little to report other than it’s all of a quality you’d expect of the price tag. One thing that is worth highlighting is the integrated lighting system. Having ridden a handful of bikes with integrated lighting systems in the past, the Lezyne lighting system fitted to the Turbo Vado SL was exceptional, offering both be seen and see by visibility regardless of the time of day riding the bike. 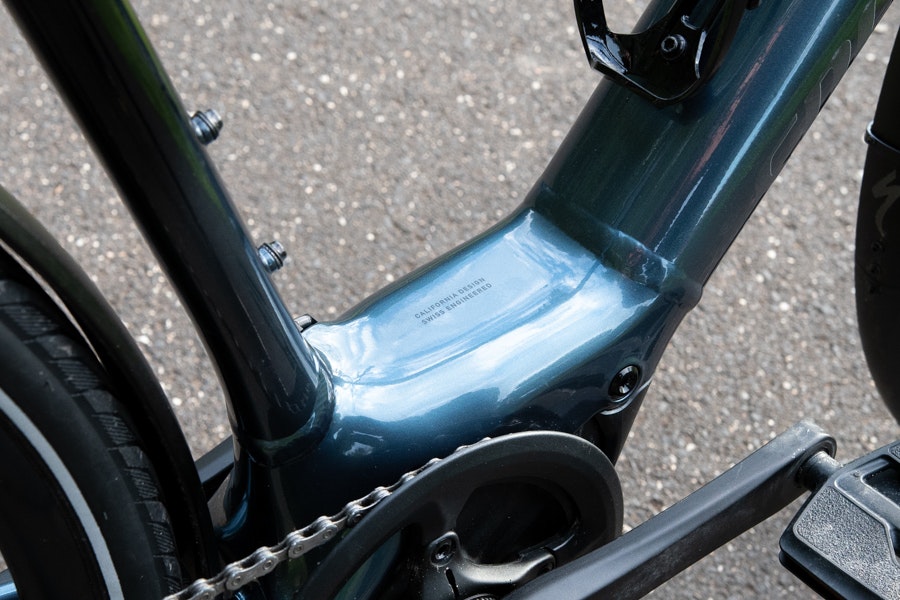 While the Turbo Vado SL with its RRP of AU$7,000 is undoubtedly by no means the most affordable e-bike on the market, second-hand cars can cost less; it does provide us with a solid picture of where the market is heading. As the first full-fat commuter e-bike to sink to an impressive 15kg weight figure, with hardly any compromise, the extra cost, in my opinion, is absolutely justified. While members of the team at Specialized AU had said the Turbo Vado SL is not a ride that is intended to replace a car, given its range and versatility, there’s no reason why it couldn’t.

So if you’re in the market for an assisted steed “so light, you’ll forget it’s electric”, and don’t mind investing in a bike that rides as well as its price tag would suggest, the Turbo Vado SL 5.0 EQ shouldn’t just be on your list of considerations, it should top it.

Thanks to Specialized for providing the product necessary for this review. Our main tester measures in at 186cms and rode a Size Large.

Browse the wide range of E-Bikes for sale from leading brands and retailers across the country right here, at BikeExchange.