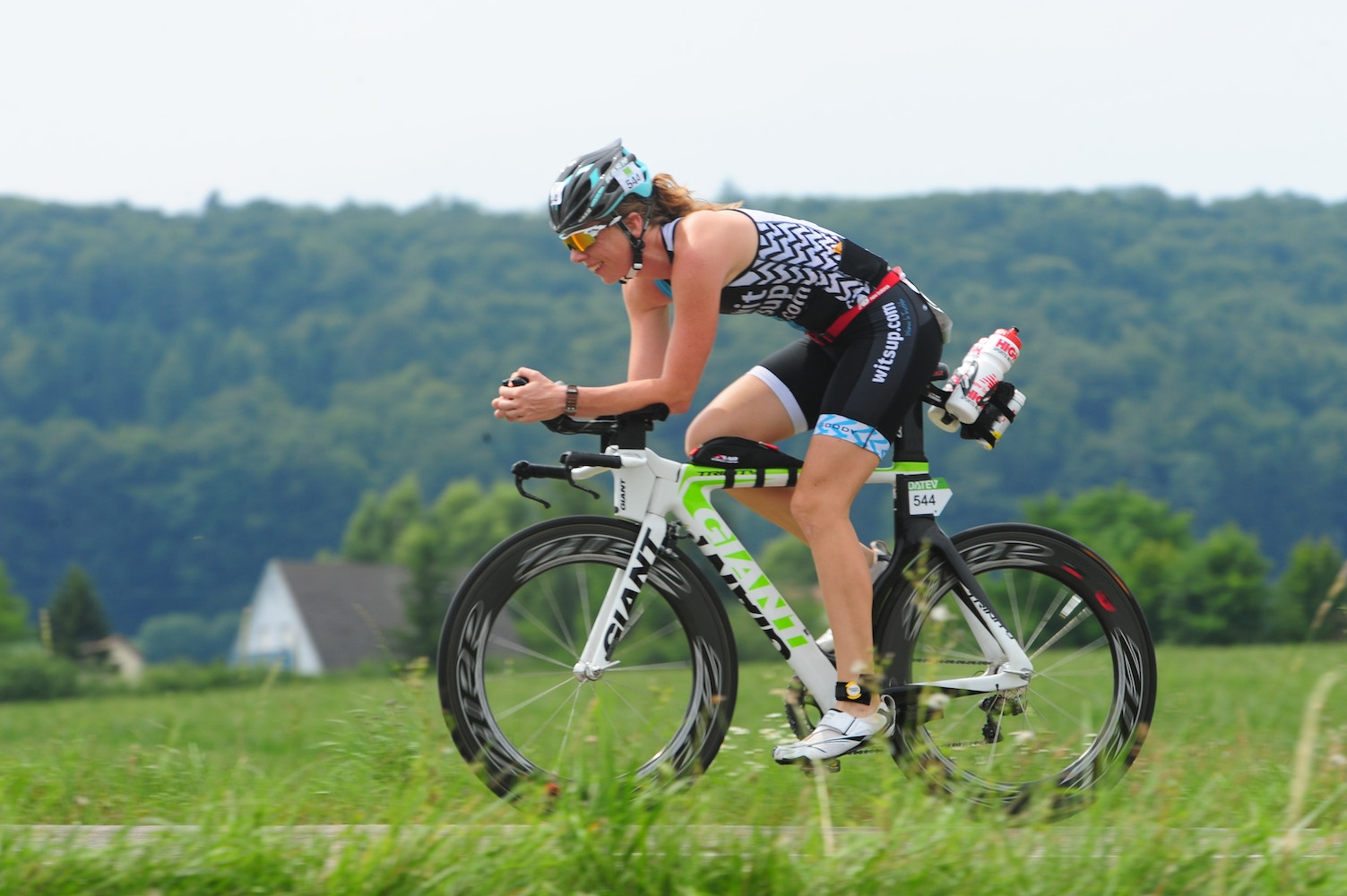 For someone who wanted to grow up and represent Australia in softball, Stef Hanson makes for a mighty fine website founder, sports magazine editor and age-grouper triathlete.

The Tassie girl shot out of her home state as soon as she could to come to Melbourne, where she was going to work to represent Australia in softball.

When life doesn’t go to plan

On her second game on the mainland, Stef did her back – three disc bulges and a vertebrae cyst, to be precise. Within six months her softball and relationship with her boyfriend were both in tatters, she’d found a job at a bar and some temp work in an office.

There was no way she was going back to Tassie just yet.

It wasn’t a golden moment in the Life of Stef. Depression is not a word she throws around carelessly, but in retrospect she was randomly breaking down in tears, she’d gone from being supremely active to not able to move much at all, and she was entirely out of control of her body and her future. Not ideal if you’re a control freak.

It was time to find out more about the human body. Something hadn’t gone right, it might happen again, what did Stef need to know to minimise the chances of that happening? She started a gym course in strengthening and conditioning, and it was here she discovered she could be paid to teach people to be active and healthy. It blew her mind. Up until then she thought a life in sport meant becoming a PE teacher – there weren’t too many opportunities in the world of sport in Tasmania and personal training hadn’t hit the Tassie shores with the gusto it had in Melbourne and other Australian states. A new direction took shape – Stef was on her way to becoming a Personal Trainer. In tandem she was undergoing a lot of physio for her own rehabilitation which included some swimming and riding, however, despite her determination, for two years her back continued to relapse.

One particular pain-wrenching afternoon when her physio’s elbow was firmly pressed into her gluteus maximus, Stef’s physio told her about the Noosa Triathlon – a sport that sounded just crazy enough for Stef.

She registered for her first in 2007 in Noosa, crossed the line 12th and felt like she’d made the best discovery ever. She was addicted. Someone suggested she try out for the World Championships, which she thought sounded completely insane, so she did. She qualified, which had her feeling like she was at the pointy end of the country’s athletic elite (back then she didn’t realise all she had to do was pretty much turn up to six races in Aus and qualify). Her back was still relapsing but off to Vancouver she went. She raced, but the plane trip exacerbated her injury and set her right back. Still – despite the pain and lack of flexibility and the extreme cold conditions, it was the best time of her life (she never partied so hard at a wrap party. Until of course the next one…) and just hooked her even further into the sport. In the lead up to the Worlds, a very proud friend of Stef’s approached a triathlon magazine to support her trip to Vancouver. Clearly at that point neither Stef nor her friend had any clue about the ka-ching factor, or lack thereof, in triathlon. However, the editor of the magazine suggested a short profile piece on Stef’s story instead. They liked what she produced, and once they discovered she was a Personal Trainer they suggested an ongoing contribution, about strength and conditioning for triathletes. The writing bug was born. Soon race reports, interviews and feature articles followed.

Back to sport, and things went to the next level in 2009 when Stef raced her first Ironman in Busselton, West Australia. She’d done a season of halves prior and placed third as an age-grouper in Shepparton (she also excitedly notes here that her time that scored her a third in the 2008 Shepparton would be so far from the mark these days – a tribute to the increased numbers of participation for women in triathlon, and the improved depth of fields).

A sensational cyclist, she went way too hard on the bike (something she is still guilty of today and struggles to learn how to pace) and cooked herself in time for the marathon. She didn’t wear enough sunscreen and began to fry as well. Pins and needles started to form in her hands, and she developed blurred vision and dizziness. She began slurring her words when responding to concerned questions from friends and random spectators on the sidelines. She stopped sweating.

She was cooking herself.

Onlookers started calling for First Aid, but Stef resisted. A very close friend and Ironman supporter on the day, too scared to pull her off the course and away from her dream goal, began walking with her. They walked for 15km. By this point she began to talk again and he began to develop Achilles pain from walking such a distance in thongs. She made it to the end. So did he, just. She was even more hooked.

But that was five ironmans, 10 half Ironmans, 10 Olympic tris and something like 30 sprint events ago, and a lot has happened since. As she did in her softball days, Stef launched herself into the world of tri in as many different ways as she could.

Ambassadorships with the likes of Giant and Oakley – tick.

Becoming a tri commentator for tris around the country, including the Weetbix Kids events – tick.

But surely there was more she could do?

At full throttle in PT world and writing on the side for a tri magazine, Stef began to get annoyed.

Tri didn’t enjoy a major media profile like other sports around the world, despite it being one of the fastest growing on the globe. More frustrating, the women involved in tri hardly got any kudos. Commentators touched briefly on how women were racing before returning to the main event – what was happening with the men. Mainstream media coverage was poor to say the least – there was a deficit both in terms of volume and quality of coverage. And at a grassroots level through her work Stef encountered hesitation from women on a regular basis:

An idea started to form in her head in 2012. What if she got a bunch of celebrity females together, with no prior experience in triathlon, and worked with them so they could race a sprint by the end of the year? Their journey would show others how achievable and fantastic tris could be. What if she took that a step further, and created a dedicated website for women in triathlon? A community hub of expert contributions and advice, race reports fully focussed on females, network links, great stories; an online positive tri community and culture for women.

Women in Triathlon, or WITSUP, was born.

Fast-forward and WITSUP is a veritable business as well as a thriving community. Women around Australia and the world have flocked to the site, hungry to not only hear, learn and share, but to also support a passion that unites them all. Some of the biggest names in the pro community didn’t hesitate to jump on board – Bek Keat, Belinda Granger, Emma Jackson and Elly Franks are all official Ambassadors. Olympic Gold Medallist, Emma Snowsill recently came on board as a contributor as well. In its infancy the site launched the hugely popular WITSUP scholarship (of which Kacey Willoughby and Hannah Whiteside are the first and second recipients – applications will soon open for a third), dedicated to assisting grassroots female triathletes achieve their goals by way of product and financial support, as well as access to leading professional experts.

Sports brands also identified the shift Stef was advocating, and they too began to lend their support. WITSUP has become a dominant player in the world of women’s triathlon.

But why stop there?

Get the latest cycling news here!

In 2013 Stef, an active hater of English throughout school, was approached by Australian Triathlete Magazine to become its editor. Once she picked herself off the floor, the idea grew more and more appeal. She was already religious about the sport – commentating meant she could talk about any tri topic under water, she knew so many of the athletes – elite to awesome age-grouper to just-love-getting-out-there-and-having-a-go level, she knew the faces behind the brands; she knew the sport – inside and out. It was an insane thought, but it kind of made a lot of sense.

As her English teacher was keeling over from the news, Stef hit the ground of publishing at break-neck speed. The first to admit she had no idea how to edit a magazine, Stef learned fast. Years of living tri meant she had an innate sense of what her readers – existing and new – wanted, and where the stories were to be found. It has been surprisingly easy for her to draw a line in the sand between her magazine and WITSUP commitments. She basically just uses every spare moment of life. It’s not uncommon for Stef to be on the windtrainer doing intervals, the easy minutes used to punch out a quick work email here or follow up an enquiry there. There’s no line between work, rest and play; they’re all pretty much the same thing.

Asked about a favourite pinch-me-I’m-dreaming moment, and Stef prefaces her answer by saying she’s always been a Fan Girl. But there was this one time, when she had her email accounts for both the magazine and WITSUP opened on her laptop. Suddenly, in came an email from Three time Ironman World Champion male Craig Alexander and at almost the same time, another email entirely unrelated from four time Ironman World Champion Chrissie Wellington.

Let’s not forget her actual wedding day which incorporated a triathlon for guests who wanted to take part the morning of the wedding – organised by Stef. Plus the triathlon themed wedding day, including aid stations from ceremony to reception. As we write this, Stef’s over in Europe enjoying a delayed honeymoon (she couldn’t leave Australia during the tri-season) after having raced Challenge Roth. Apparently she’s actually got some down time over there as well… Who knows what she’ll come back concocting after a bit of time on her hands.