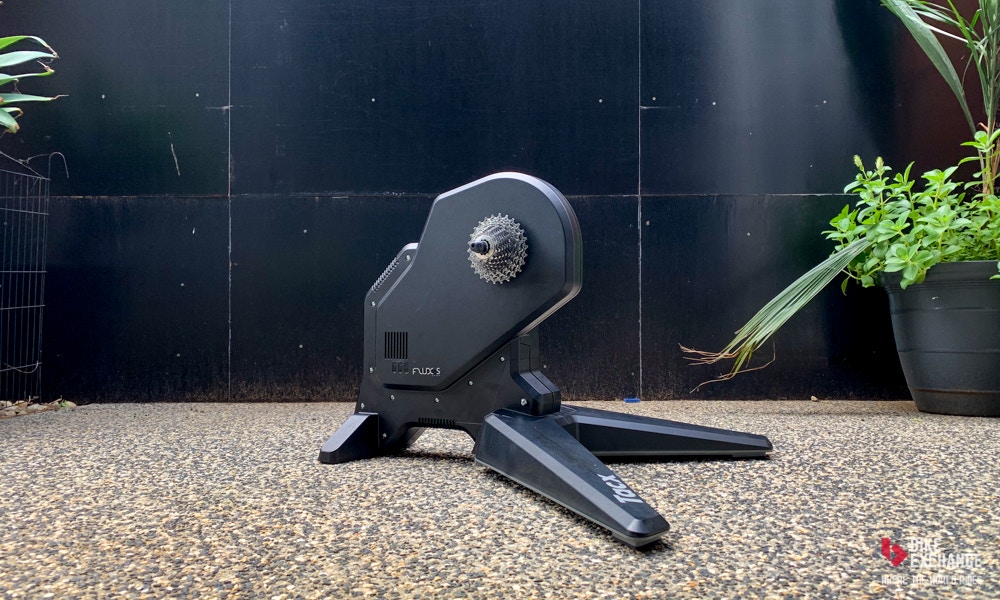 Initially released back in 2016, The Flux series of smart trainers are positioned as the entry-level direct-drive options from Dutch company Tacx. After a series of mild updates in its first 18-months of life, Tacx pulled the curtains back on a second iteration of the Flux in late 2018, expanding the product line out to two models, the Flux S and the Flux 2. Boasting a host of refinements from the initial offering, with thanks to Australian Tacx distributor Sheppard Cycles, we set about putting the updated unit through its paces.

Over the last three months, several team members at BikeExchange have put the unit through its paces, and have been pleasantly surprised with what’s on offer. So without further ado, read on for our thoughts about the entry-level Flux S direct-drive smart trainers from Tacx.

What We Didn’t: The lack of a carry handle, wheel block or a thru-axle skewer, the unit instability during sprints and the somewhat shallow simulated gradient limit of 10%.

Under the Hood Specifications 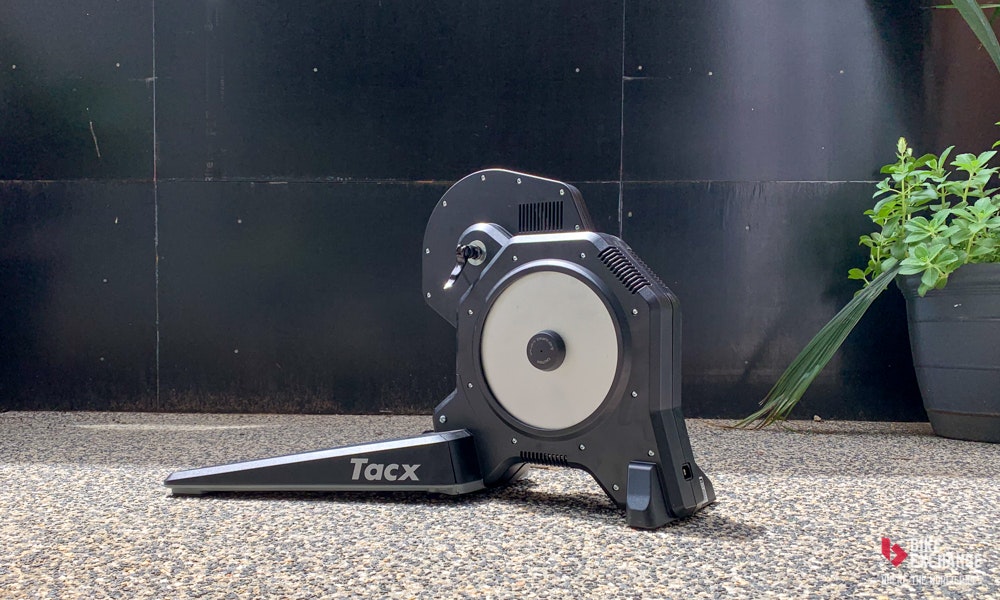 Despite its entry-level price point, the Flux S boasts an impressive amount of features within its sleek frame. Maximum power stands at an impressive 1,500 watts, while the unit is capable of replicated simulated gradients up to 10%. The trainer makes use of a 7kg flywheel to replicate a road like feel indoors, while a revised retention unit is said to aid in the units ability to read and hold higher outputs with greater accuracy than the first generation units.

The trainer is housed in a sleek black frame that has a relatively small footprint, although it must be noted that the extended, offset legs are not retractable, taking up a little more room than its competition when fully set up. The slightly tweaked design also facilitates the use of long cage derailleurs, meaning that riders are now able to run larger rear cassettes that are sure to make tackling those virtual mountains a little easier.

Finally, the stated accuracy of the units internal power meter is a claimed +/-3%. The Flux S is available through authorised Tacx dealers around the country and carries a retail price of AU$999. 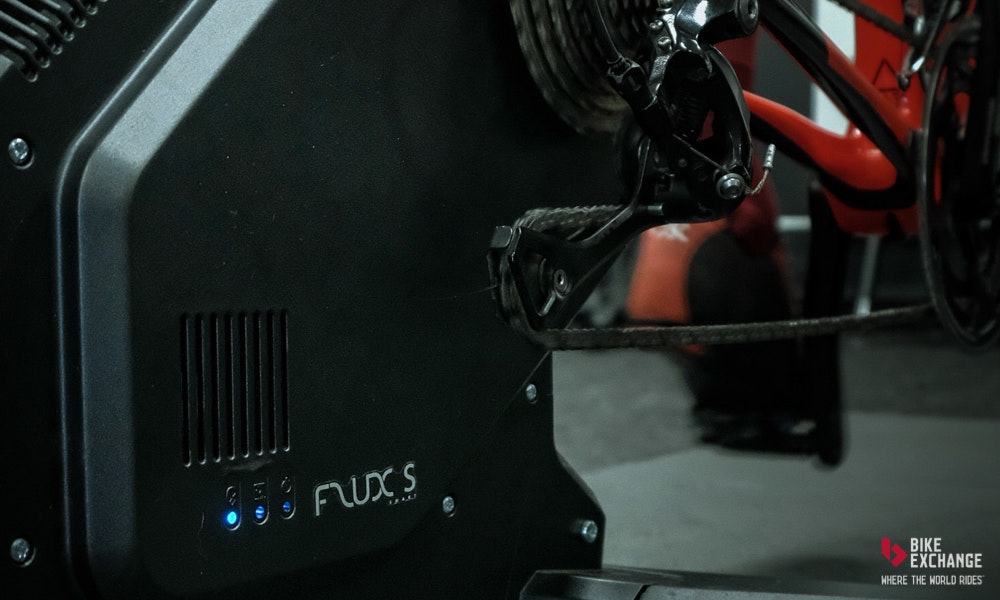 Being a smart trainer, the Flux S carries many connection protocols that place it bang up to date with its competition. This includes connection via Bluetooth Smart, ANT+, and third party trainer control. In the latest firmware update, Tacx also rolled out FTMS (Fitness Machine Support) allowing the trainer to be controlled more accurately by Bluetooth Smart protocols.

This means that the trainer is compatible with a vast majority of third-party fitness software, such as Zwift, Trainer Road and The Sufferfest. The built-in cadence sensors also allow the unit to broadcast cadence metrics to your favourite training apps too, which is a nice touch often lacking at the entry-level. 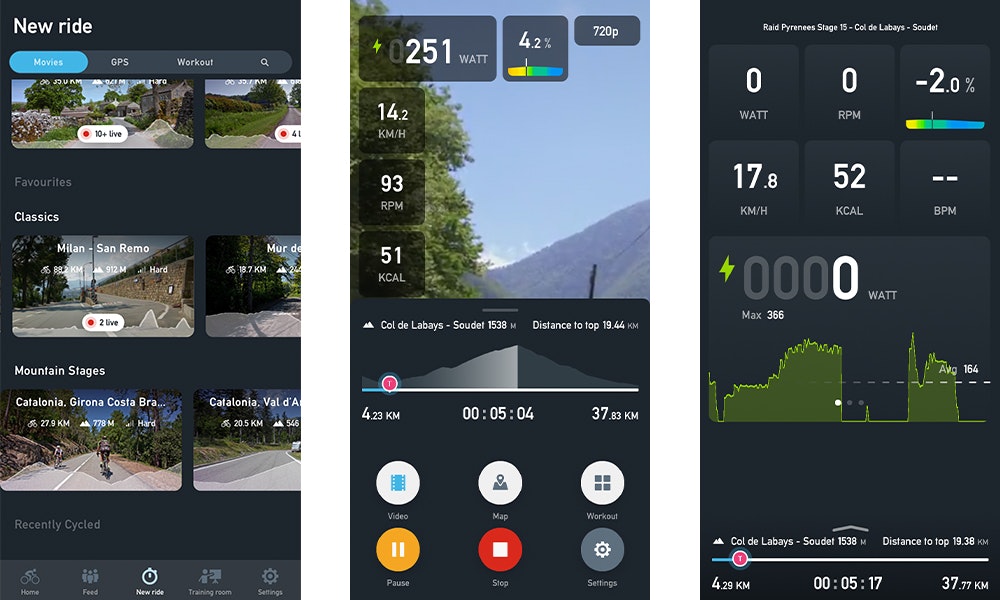 The training aspect of the software has an online element too, allowing riders to compete against others in a virtual setting. While the population of a given route may be significantly lower than other big-name third-party software providers, there still appeared to be a good number of riders utilising the proprietary software during the test period.

The Tacx training software has both pre-loaded training plans and workouts within its ecosystem. Much of the training plans come courtesy of Tacx sponsored WorldTour teams such as Bora-Hansgrohe, Astana and Lotto-Soudal. 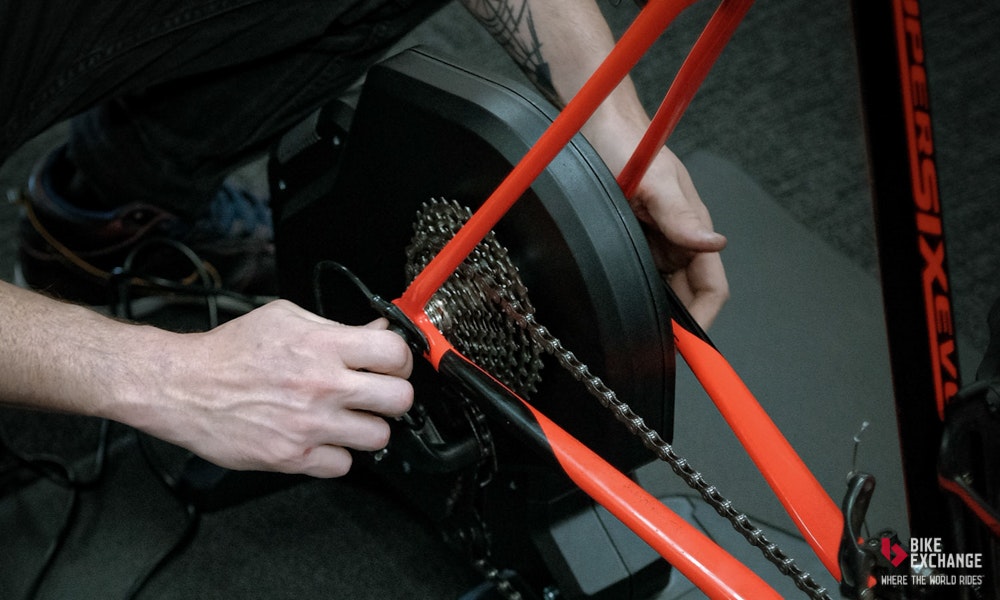 We’ve been hands-on with the Flux S for a little over 3 months now, with the unit tested by several members within the BikeExchange team. We’ve used to the unit to maintain fitness, and build fitness into an event and race in the virtual world, so throughout a few thousand virtual kilometres, we’ve certainly put this unit through its paces.

Upon arrival, the initial set-up was a breeze. Modern direct-drive smart trainers are hitting their straps when it comes to set-up out of the box. In the case of the Flux S, all that was required was fitting a cassette (not included) and attaching the two bolts that hold on the offset supporting feet, that’s it. Plug the unit in using the included power supply, and you’re ready to ride in under five minutes.

Also included in the box is a quick-release lever, a power supply cable and a user manual. Somewhat disappointingly, a thru-axle adaptor isn‘t included with the unit, meaning that those with a disc-brake equipped bike will have to source their own. Yes, the cost is negligible, but it’s an inconvenience nonetheless. 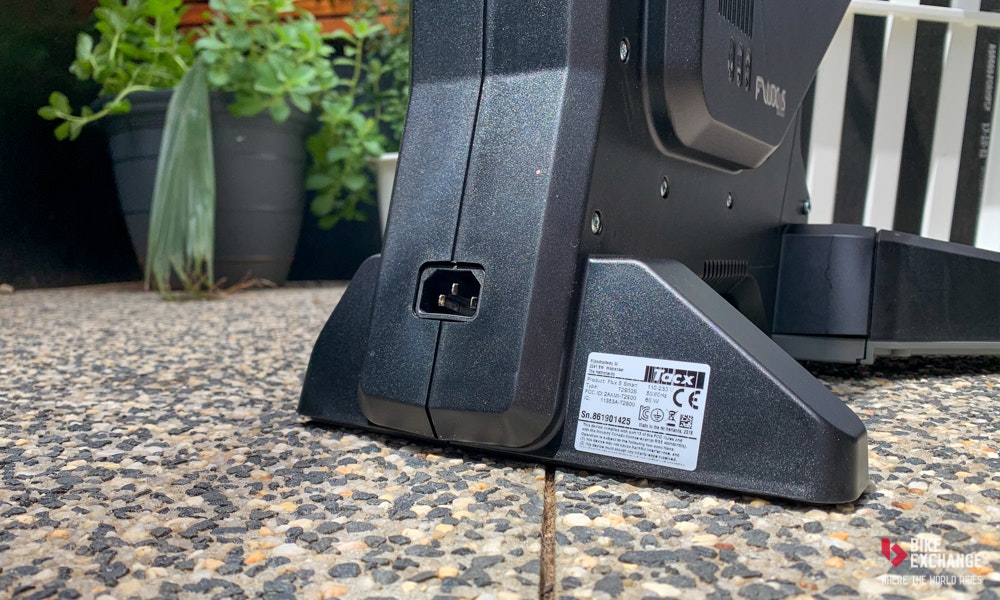 The hard plastic surfaces impressed with their quality, are easily cleaned and felt a step above other entry-level direct drive trainers we’ve used in the past. However, the lack of a carrying handle combined with the 21kg heft of the trainer does make the unit somewhat awkward to move around. Moving to the base of the unit, while the extended leg does add some much-needed stability to the Flux S, the legs themselves are fixed in place. This means that those looking for a unit that packs up neatly when not in use will have to make a compromise in the space department.

Connecting the trainer to our devices was a largely fuss-free experience. The unit connects via both Bluetooth Smart and Ant+ protocols, however, as is the case with most smart trainers, we were unable to connect the Flux S to two devices concurrently, so a bike computer and an iPad running Zwift for instance. 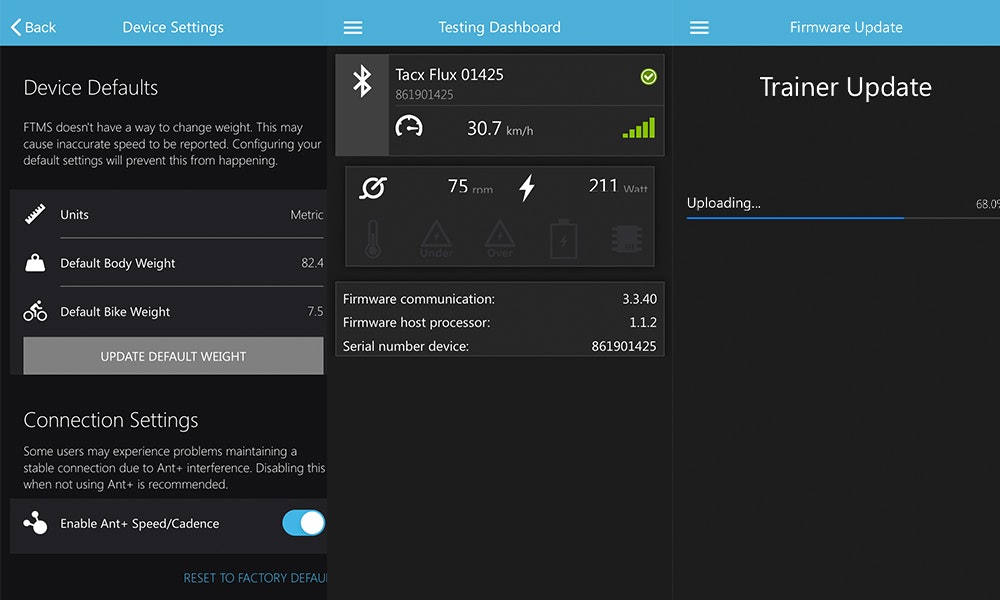 When it comes to riding feel, the sizeable 7kg flywheel housed inside the unit makes for an experience that’s very much like the real thing, riding outdoors. Keeping on top of the gear, or attacking off the front in a virtual race was handled with ease. The 10% incline simulation made the unit adept at handling much of the rolling terrain in the virtual world. However, the ceiling is noticeable when tackling steeper virtual slopes compared to similarly priced trainers such as the Elite Direto.

While the staggered feet create a stable platform for most riding situations, both testers experienced instability when riding hard out of the saddle. Something to be wary of if you’re a rider that naturally moves about on the bike while putting the power down. 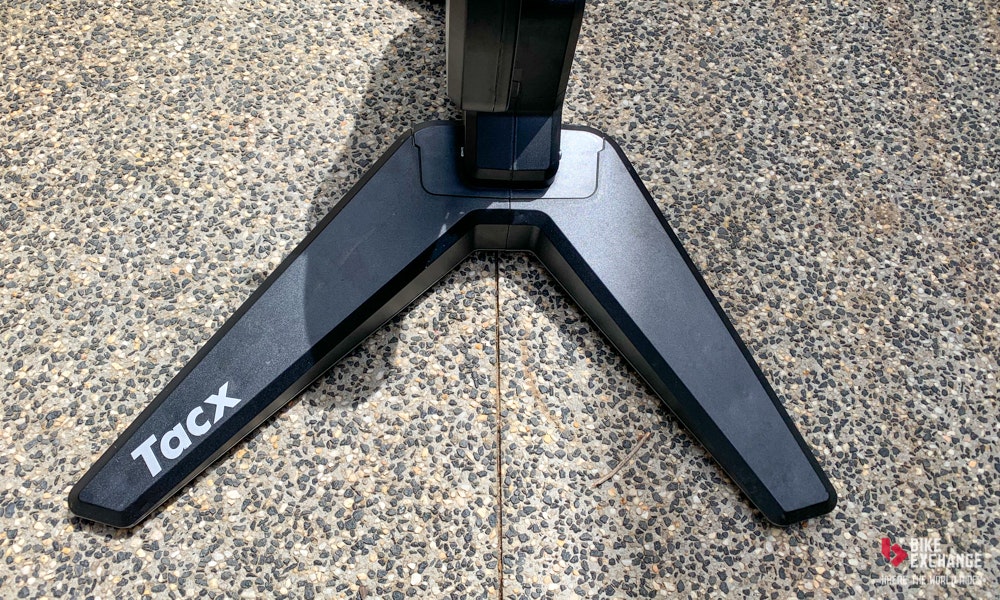 The Flux S also includes an inbuilt cadence sensor which is a nice advantage over some of its competitors, however, for accuracy’s sake we’d recommend using an on-bike cadence sensor. While the sensor in the Flux S was fine, we found the cadence metrics slow to update on our training software.

With a maximum power of 1500 watts, the Flux S handled big power hits with ease. When in simulation mode, the power accuracy was within acceptable parameters when compared to my Favero Assioma power meter pedals, and overall, we had no issues with most of the metrics outputted by the unit. Flick the trainer over to erg mode, and the trainer responded to changes in power in an impressively short amount of time. Sound levels also impressed, with the Flux S one of the quietest units we’ve tested, perfect for those with sleeping pets, kids, or partners. 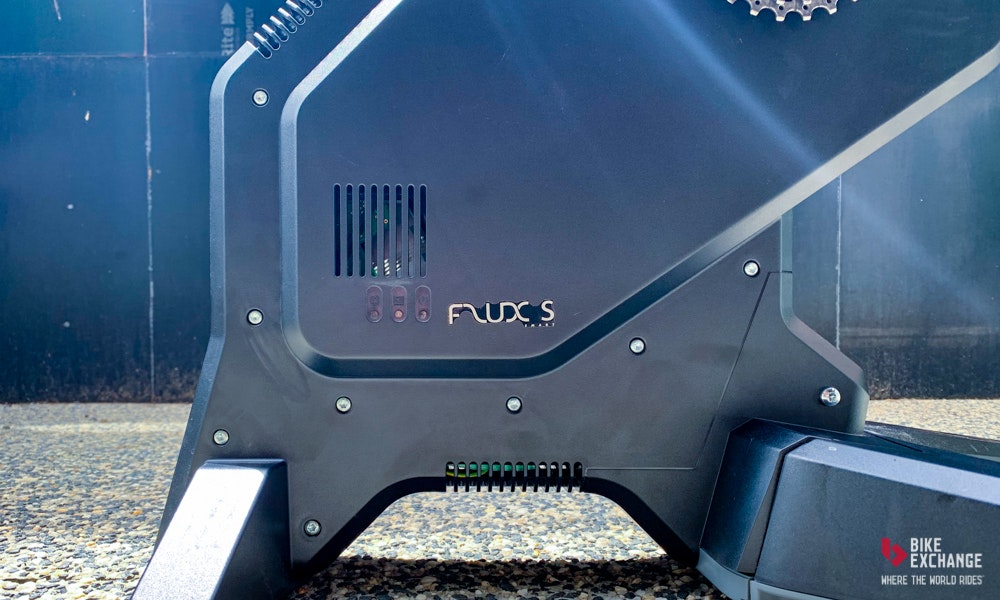 While smart trainers have been on the market for several years now, no longer are the high-priced items, with the segment benefitting greatly from trickle-down economics. There’s a myriad of entry-level direct drive options to choose from these days, and with the Flux S, Tacx presents buyers with an extremely viable option.

The Flux 2, priced at AU$1,199 boasts more impressive stats in terms of maximum power output and a higher simulated incline of 16%, however, we don’t feel the additional $200 in RRP is a worthwhile spend. After all, with the Flux S, the road feel is excellent, set-up out of the box is seamless, and there’s more than enough power and connectivity smarts on hand to handle the needs of most riders. So if you’re looking to step up to a direct drive trainer, you’ll be hard-pressed to find a better value offering.

Thanks to Sheppard Cycles for providing the product for this review.

Looking to join the virtual peloton or looking for more information on smart trainers? Check out our Ultimate Indoor Trainer Guide for all you need to know.