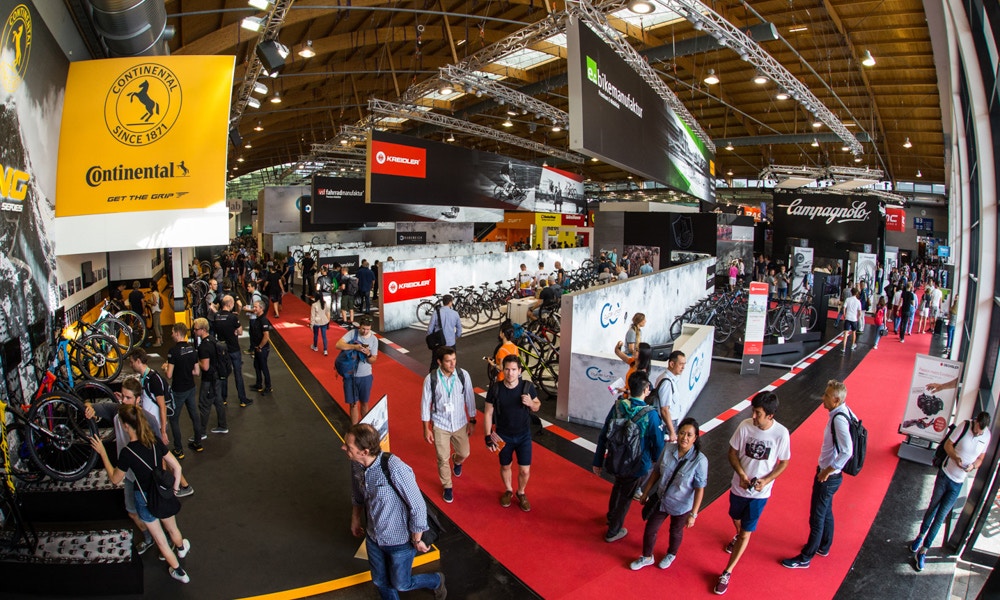 Over a three-day showcase of the latest and greatest in cycling, Eurobike 2017 unveiled a colossal amount of impressive new product. A meeting point for the world's most prominent bicycle manufacturers and smaller niche brands alike, Eurobike delivered on all fronts when it came to everything bike.

For 2018, consumers can look forward to being spoilt for choice when it comes to a new pair of kicks or a fresh helmet - with a huge selection of elegant designs and eccentric colourways on offer. Also catching our attention was the vast array of neat tools and flashy cockpit components, as well as an ever developing haul of emerging bike tech courtesy of industry leaders Wahoo and Garmin.

From disc-brake race wheels to bikepacking bling - we have rounded up our pick of the best Eurobike 2017 had to offer...it might be time to update that need/want list! 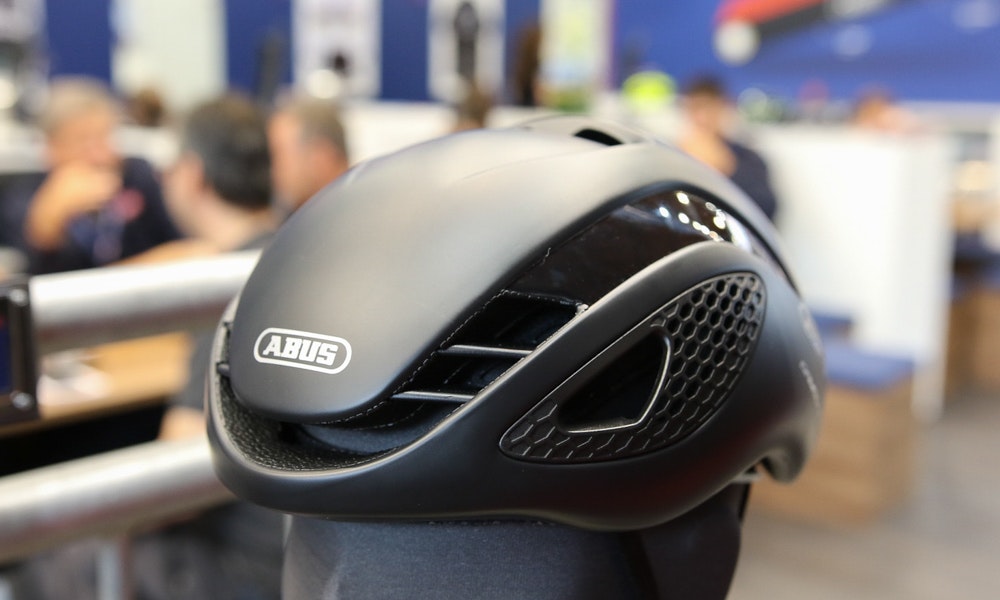 Certainly best known as a lock company, Abus has also been offering helmets for some time now, too. As used by Movistar, the Gamechanger is Abus’ new wind tunnel-tested aero lid. The helmet features clever ports and channeling to store sunglasses at the rear of the helmet, while the front is left open to let air in. The helmet has been designed to be more breathable when in a more upright riding position, and then closed to the wind when the rider’s head is down. It’s claimed to weigh 260g in a medium size. 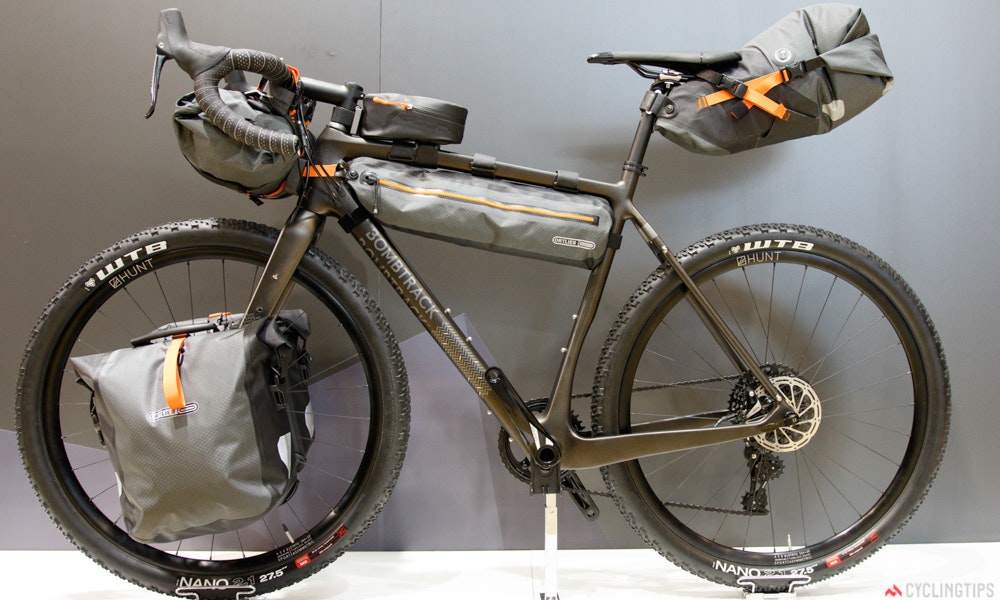 Ortlieb has a new BikePacking range for 2018. The German-made collection is waterproof and builds on the existing range with items such as a small handlebar pack, toptube frame pack, cockpit pack and medium-size seatpack. The latter claims to be perfect for where rear tyre clearance is an issue and boasts 11 litres of storage space. 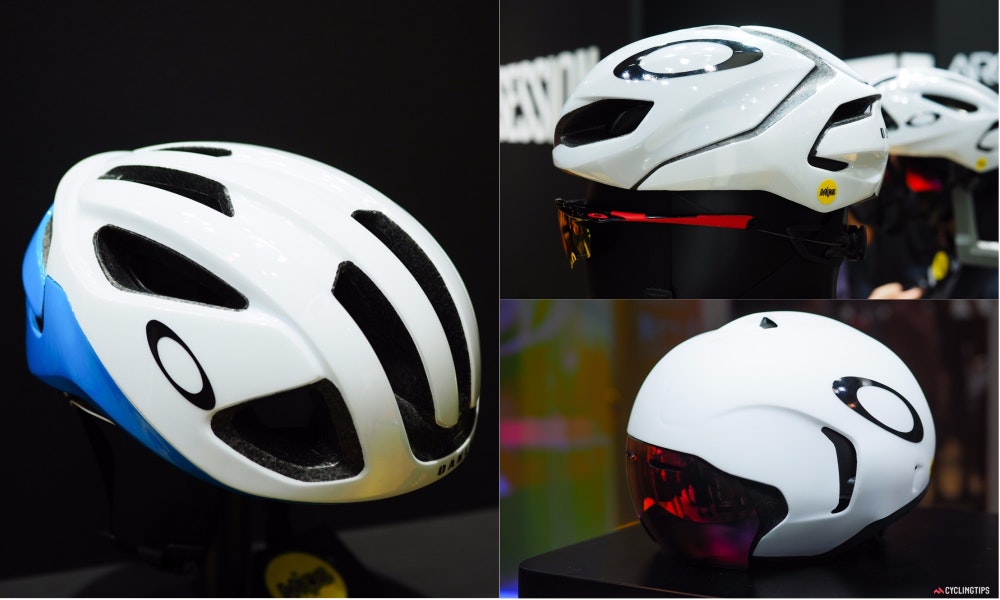 Oakley was one of the big surprises of this year’s Eurobike show, further establishing itself in the cycling scene with the release of a trio of new road helmets - the Aro3, Aro5 and Aro7.

The Oakley Aro3 is the lightest and best ventilated of the new range, intended for long days of climbing in hot conditions. Retail price will be US$180 when it becomes available early next year.

The new Oakley Aro5 aero road helmet has a trim profile, a distinctly pointed nose, and rather large intake vents up front and is expected to be priced from US$250.

The Aro7 is aimed at triathletes and time trial racers. The very short form factor mimics similar helmets like the Kask Bambino, supposedly offering better aerodynamics at a wider range of head positions than more traditionally ShimShaped helmets with longer tails. The Aro7 is expected to be priced around US $500 and includes two Oakley shields, one with the outstanding Prizm Road tint, and a second clear one for overcast days. The Aro7 also comes equipped with a magnetic buckle to assist with quick transitions in triathlon. 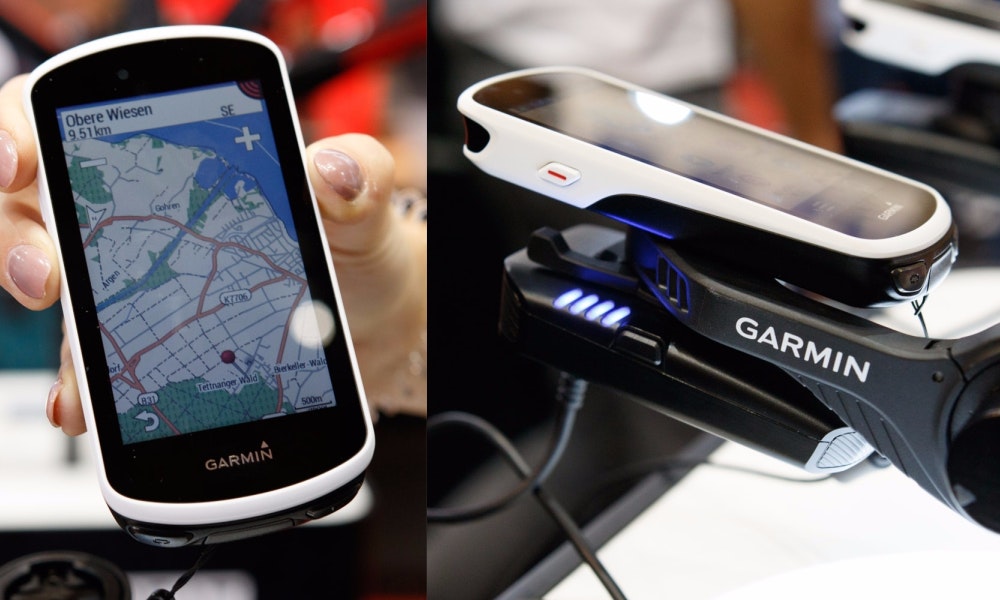 Garmin has new Edge unit to replace the 1000, the 1030 adds improved mapping functionality and greater training options. It also uses a new low-profile mount which offers a new ‘Charge Power Pack’ to more than double the unit’s 20 hour run time. The battery pack clips to the bottom of the mount, directly connecting to the device without a cable. The battery pack is sold separately and can also be used to power other USB devices (cable needed). 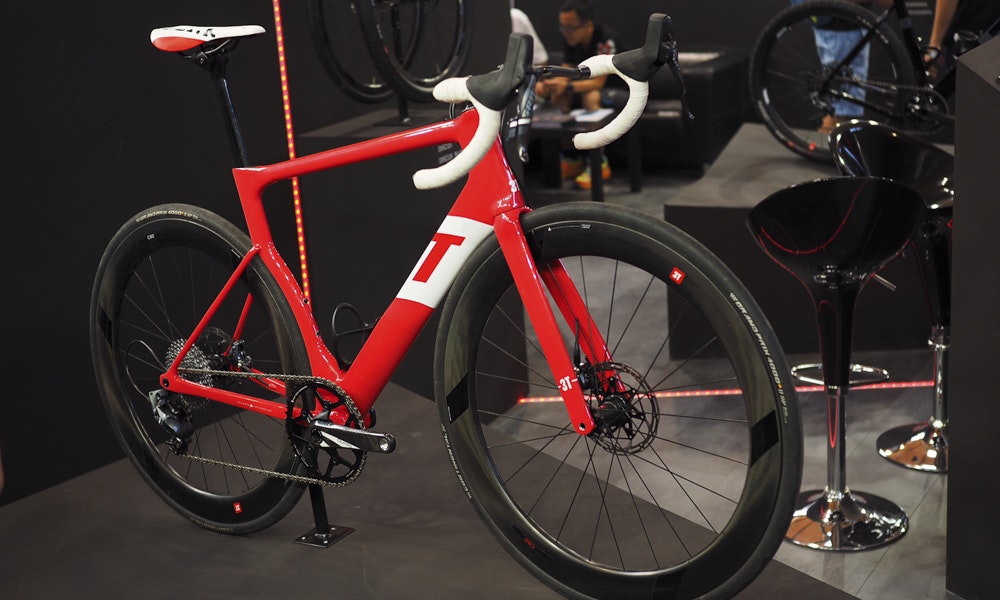 The 3T Strada is undoubtedly one of the most progressive road bikes currently on the market. The aero carbon frame is built specifically around 28mm-wide tires, disc brakes, and a single-chainring drivetrain. There is no provision for a front derailleur. 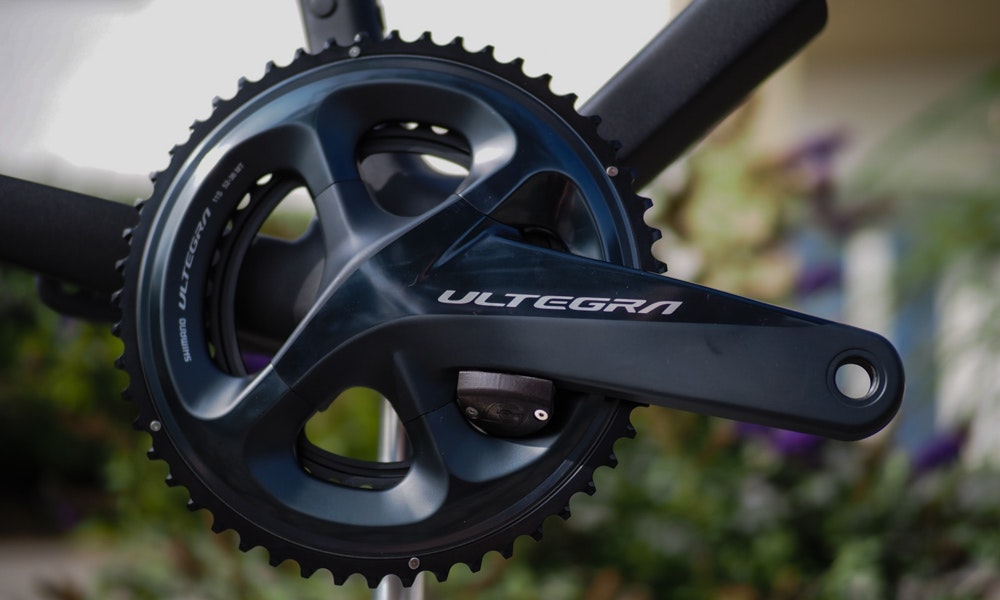 Stages Cycling will offer the new LR dual-sided power meter on Shimano’s new Dura-Ace R9100 and Ultegra R8000 cranksets to start, with more models possibly to follow. As with the original Stages Cycling power meter, the driveside unit on the new LR dual-sided meter is powered by a coin-cell battery that is easily replaceable at home. Power information is sent from the driveside pod to the non-driveside one, which then sends it all to a compatible head unit via the ANT+ wireless protocol. 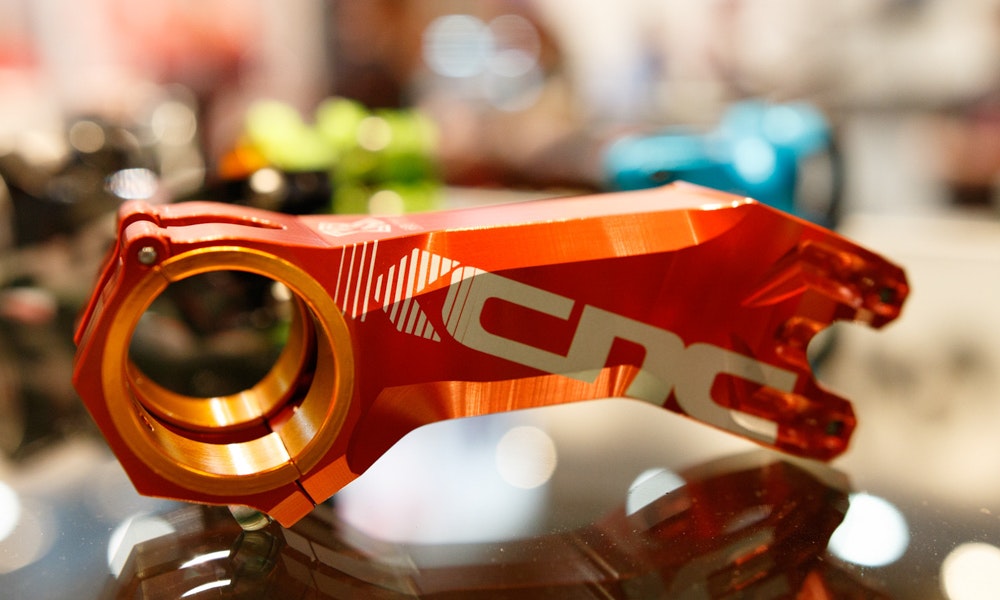 Pure bling: Looking for a CNC-machined stem that will get you low? KCNC’s drop stems are available with either -17° or -25° drops, in lengths ranging from 60mm to 120mm. The stems feature a 35mm handlebar clamp diameter with 31.8mm shims included and are available in a myriad of colours. 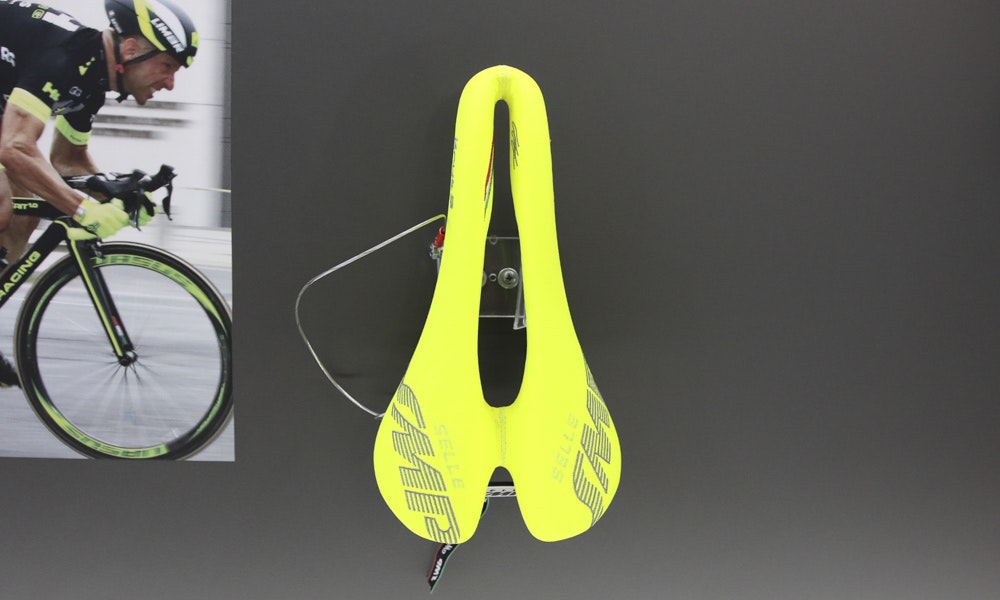 Crit Pigs rejoice - SMP have produced a new saddle called the Criterium. The shorter design is built for fast and short races (hello Australian Crit season!) where riders find themselves in extremely aggressive riding positions. The saddle features a low friction side panelling. Like all SMP saddles, it offers a really long rail for wide position adjustment. The Criterium is expected to be available from the middle of November. 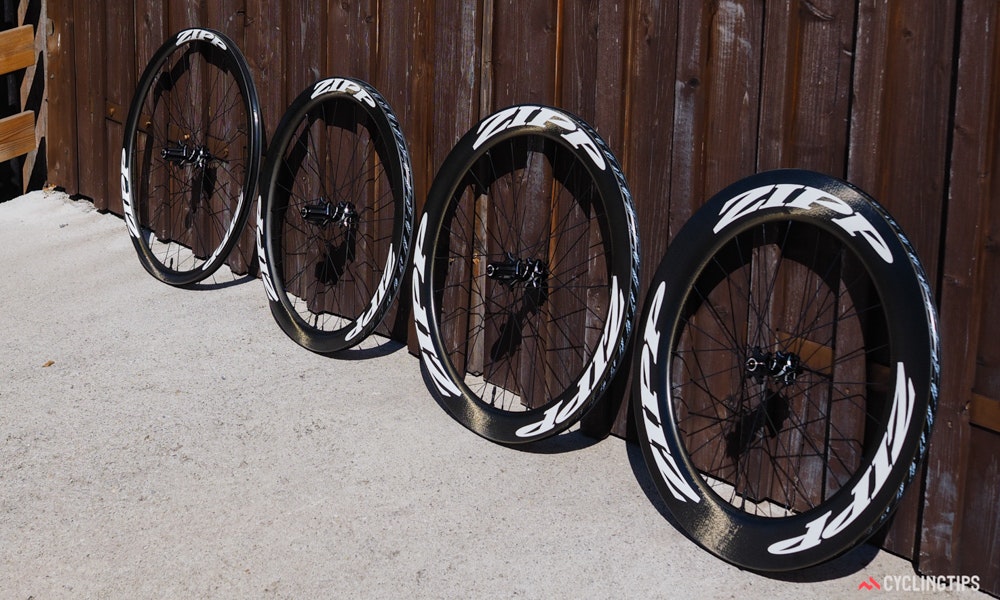 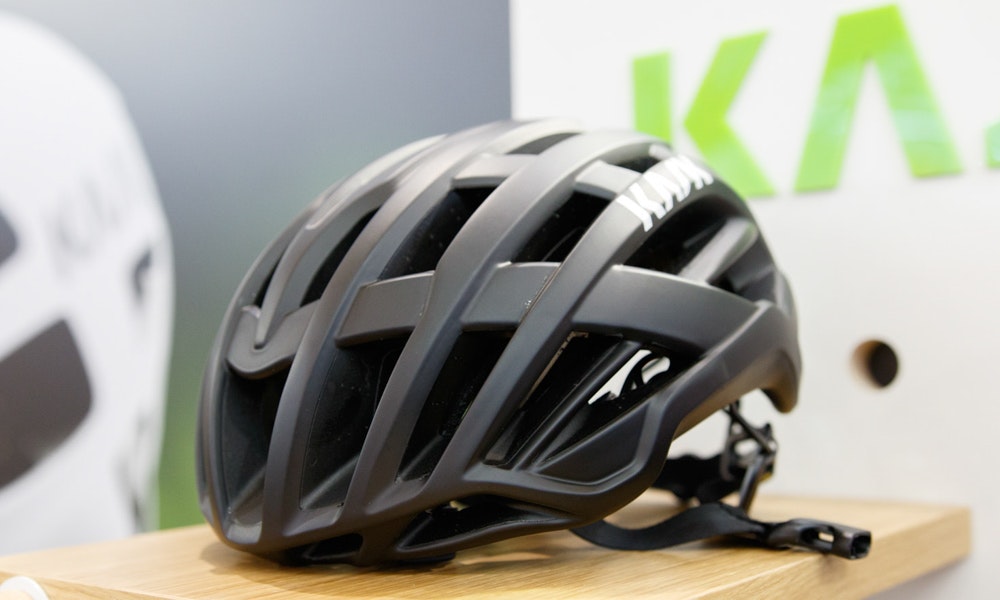 As worn by Chris Froome at this year’s Tour de France, Kask boasts a new helmet that is its lightest and most ventilated to date. The Valegro is claimed to weigh just 180g and features 37 vents to see you through the Aussie summer. It’s expected to be available from December. 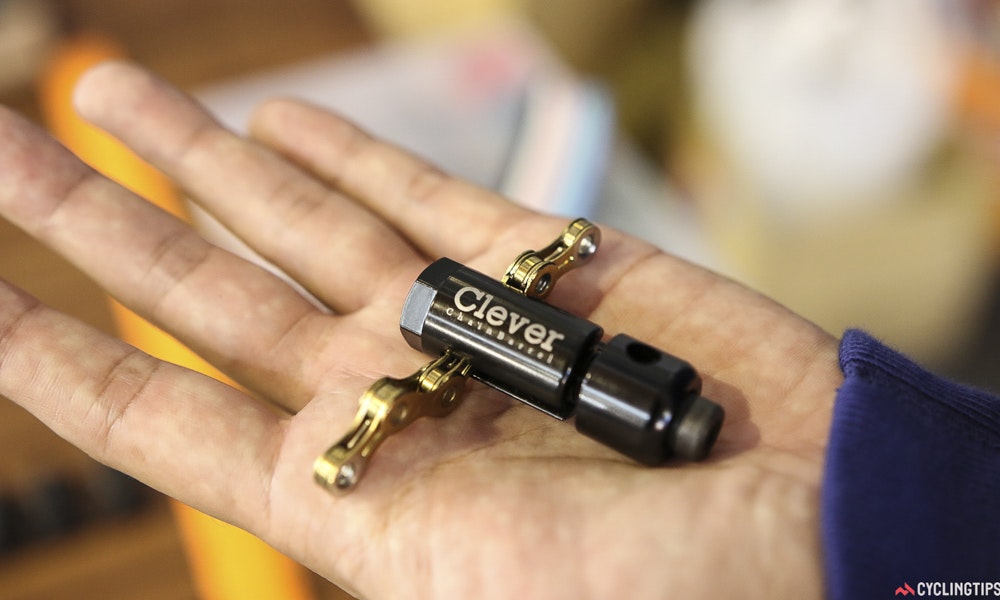 This is one of the cooler chain tools we’ve seen. The tool works with the Original Tool or a 15mm wrench to make a crazily compact chain breaker. The chain breaker captures the chain, meaning no wrongly set pins or broken tool pins. It will work with all multi-speed chains. 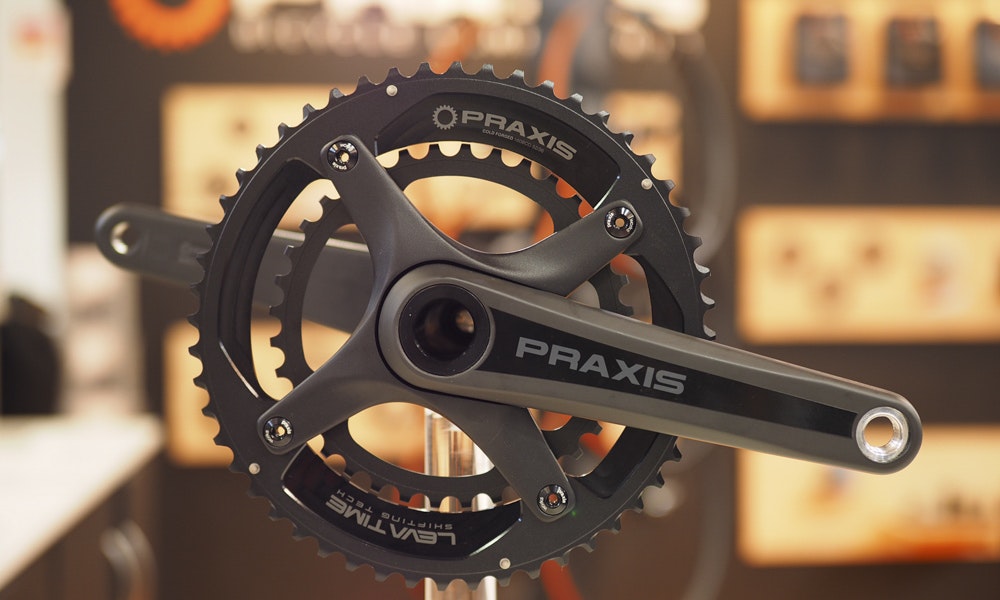 Praxis has announced a new top-end road crankset called the Zayante Carbon, built with carbon fiber arms, a proprietary “X” forged aluminum spider, and the company’s proven M30 30mm-diameter oversized aluminum spindle design. Claimed weight is just 610g (52/36T, 172.5mm, without bottom bracket), putting it not only just slightly lighter than Shimano Dura-Ace R9100, but also substantially less expensive at just US$325. Praxis expects them to be available before the end of 2017. 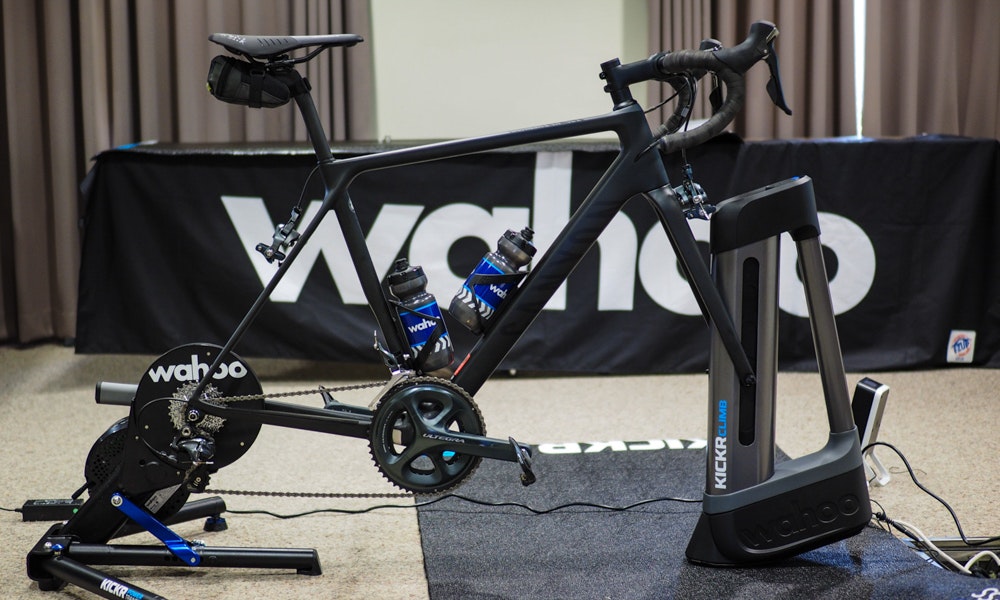 The new Wahoo Fitness KICKR Climb pairs with the KICKR smart trainer, and automatically adjusts the bike’s pitch to simulate climbing and descending when using virtual training simulators like Zwift. Wahoo Fitness says the new KICKR Climb will simulate up to a +20° uphill grade and a -10° downhill grade, all via a powerful motor that smoothly moves the front end up and down. The Wahoo Fitness KICKR Climb is best utilised when wirelessly paired with a compatible KICKR or KICKR Snap smart trainer, as that enables the automatic grade adjustment when riding simulators like Zwift. However, there’s also a manual control, which also increases or decreases the amount of resistance at the drive unit as necessary. 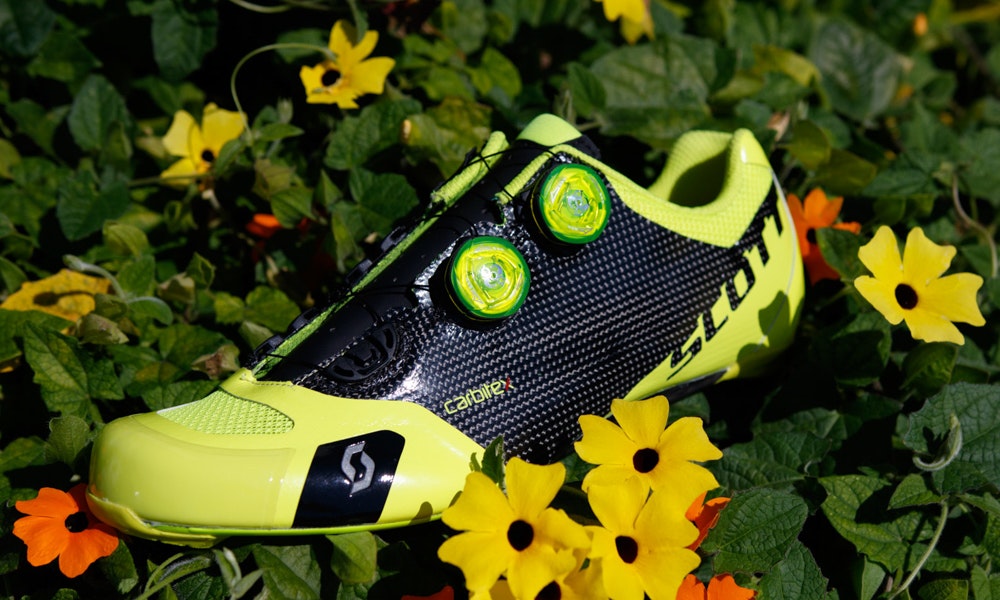 In addition to a range of new disc road bikes, Scott has also updated its range of clothing and shoes. Headlining the shoe range is the new RC SL. Scott is using a carbon fibre material from a company named Carbitex, while the upper material claims to be snug fitting, stretch-resistant, and super light. Shoes are claimed at 245g apiece (EU42.5). 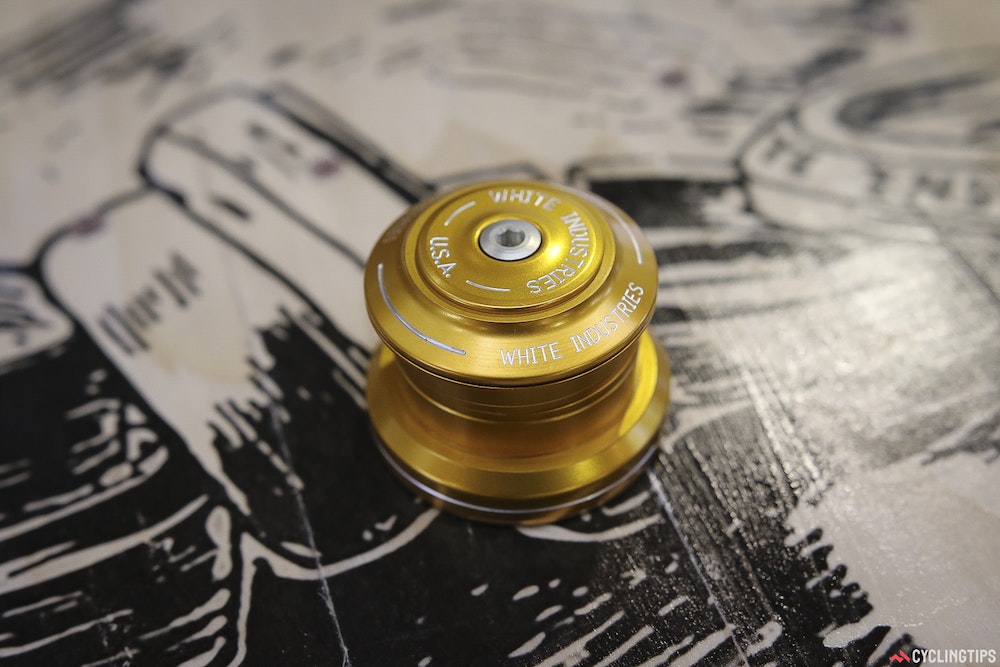 White Industries headsets were first revealed at NAHBS earlier in the year. The headset features precise tolerances for tool-free servicing and neat anodised colour options. These US made headsets will be available for sale October 1st. 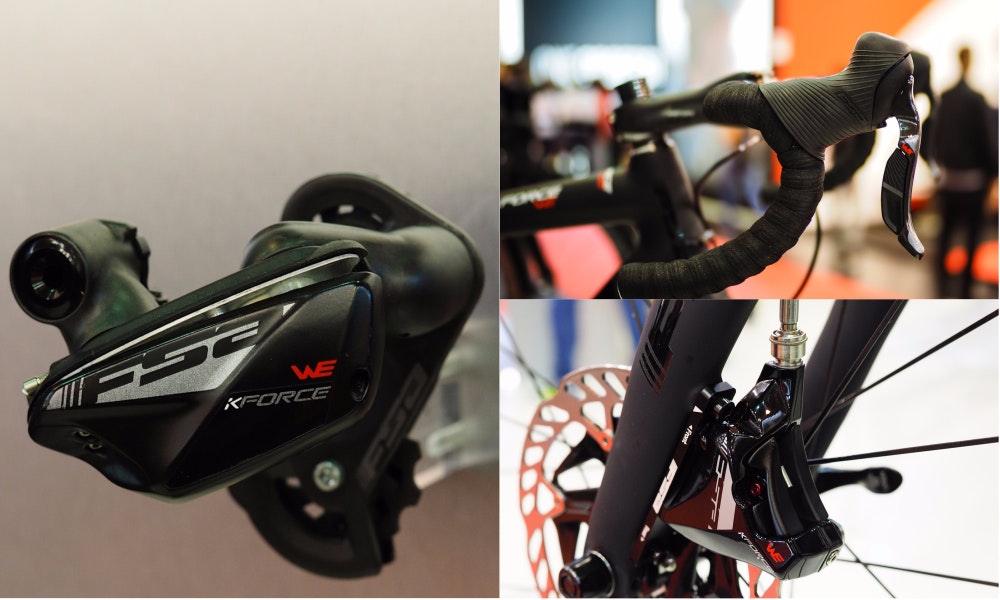 FSA is still in the process of rolling out its long-overdue WE electronic groupset, and the standard rim-brake version will supposedly finally be available come October. In the meantime, though, FSA has also developed a version for use with hydraulic disc brakes, which is aimed to arrive in shops in the second quarter of 2018. 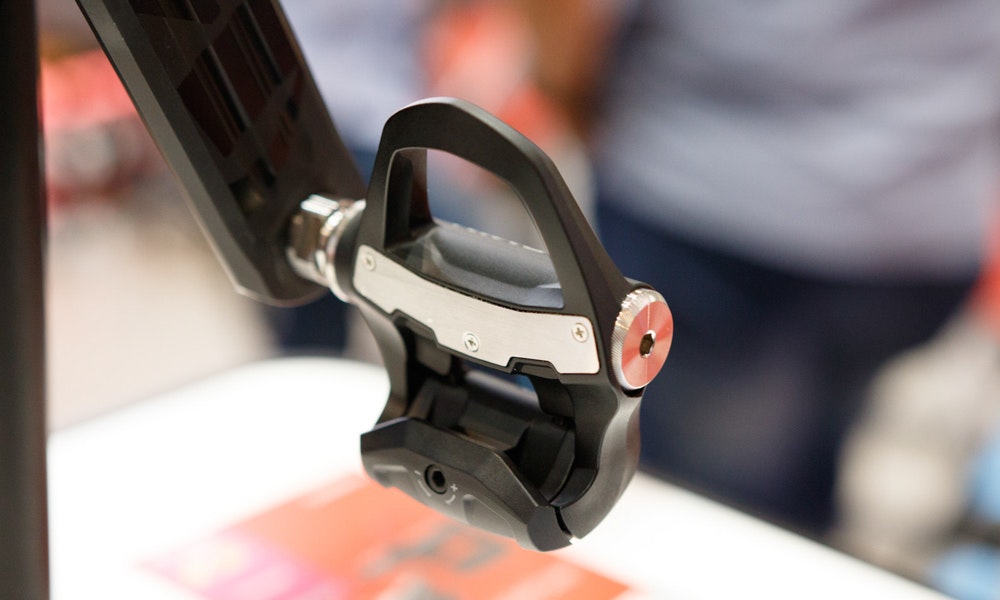 The Garmin Vector powermeter sees an upgrade for 2018. Improvements have been made all round with the key change being the removal of the external pod and integrating inside of the pedal body. The new Vector 3/3S pedals state to offer a competitive weight (316g for the pair) and simple exchange between multiple bikes. 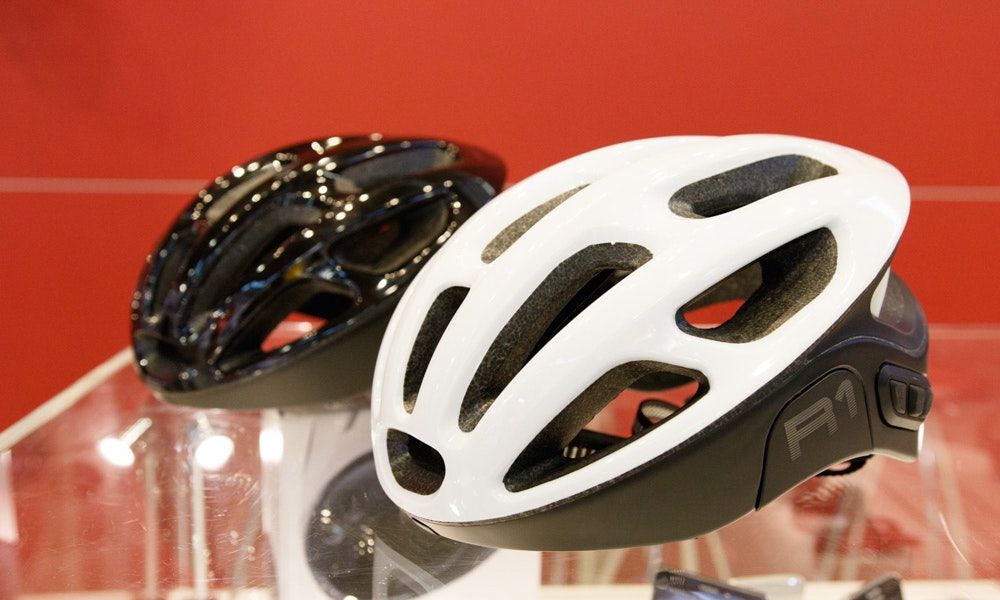 Best known for its motorcycle communication products, Sena is making waves in cycling. The helmets offer Bluetooth connectivity with integrated speakers and microphone, with one model featuring an integrated HD camera. In addition to two more utility-focused options, the company is working on a ‘racing’ helmet designed to be lighter and more breathable than the other versions. Expected to be called the R1, it features buttons on the side of the helmet and claims to have 900m working range to communicate with others using the same helmet technology. This model is two months away with no confirmation on weight or price. 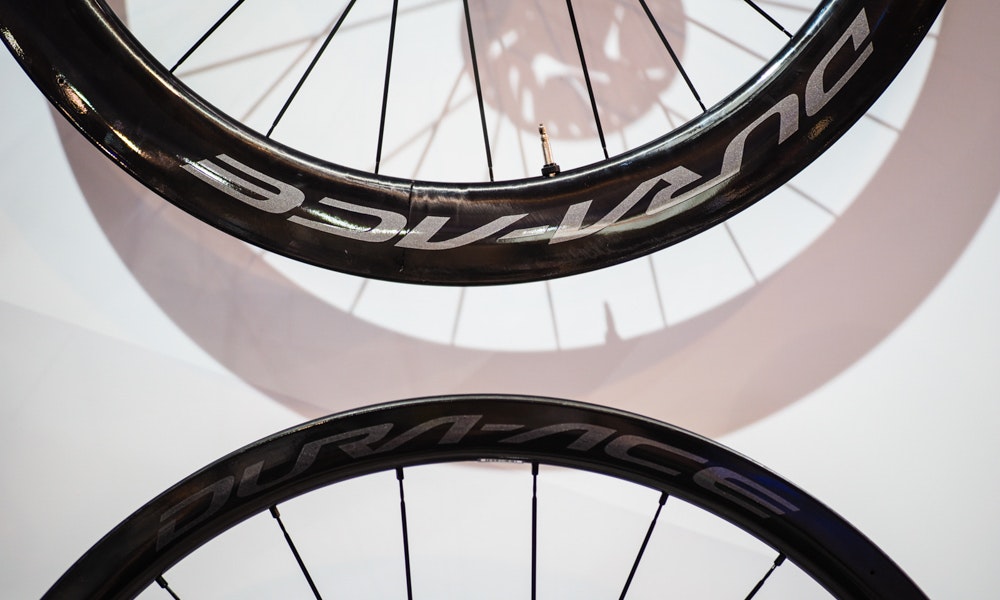 Shimano with its ever-reliable wheels has released Dura-Ace-level wheelsets for use with disc brakes, in both tubular and clincher varieties. Shimano has long shied away from full carbon clinchers, but with disc brakes, there’s no fear of overheating the rims on a long downhill. 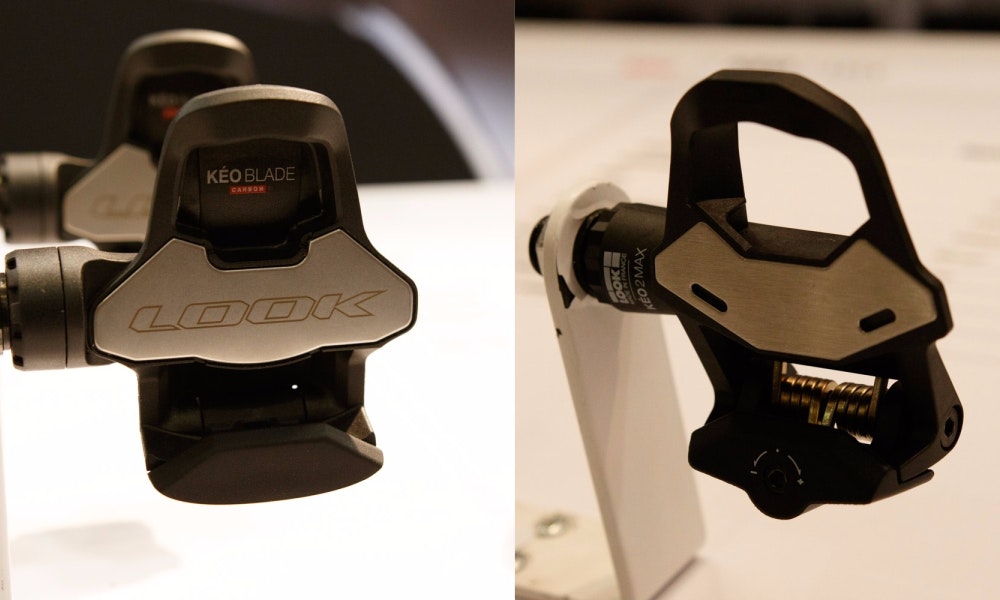 Look has updated 2 of its most popular pedals, the KEO 2 Max and the Keo Blade. The new Keo 2 Max features a wider contact surface area, improved sealing and tension adjustment between 8-12nm. The updated Look Keo Blade pedals will now ship with both 12 and 16 tension blades and feature a wider contact surface area with a lower stack height. The Titanium spindled version is claimed to weigh just 95g per pedal, and the Cro-mo version at 110g. Expect them to be available from November.

All images courtesy of CyclingTips.

For more information, check out CyclingTips' live tech coverage from day 1, day 2, day 3 and their round up of the best bits from Eurobike 2017