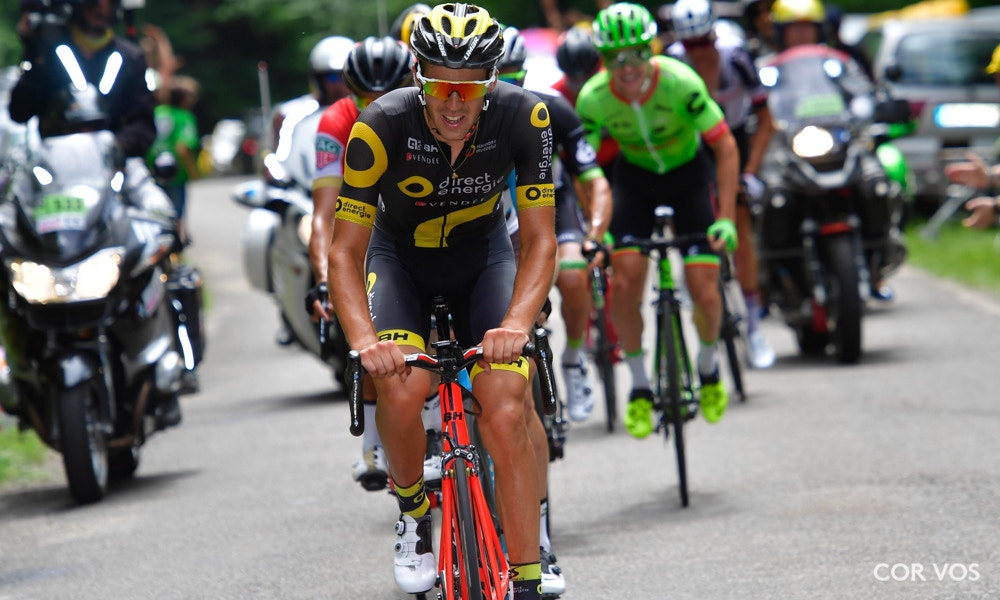 “It’s incredible, it’s absolutely amazing,” Calmejane said. “I didn’t expect this on my first Tour, I didn’t think the Tour would smile down on me this soon in my career, it’s wonderful. I’m a bit of a practical joker in the team and I told everyone earlier this morning that I was going to win this stage, but it was really a joke, so the fact that I have come here and won is unbelievable.”

Despite a detrimental quadricep cramp with four kilometers to go, Calmejane crossed the line 37 seconds ahead of second place Gesink. Guillaume Martin of Wanty Groupe-Gobert took third, narrowly holding off the Sky-led peloton charging behind.

It was an explosive day, one for the attackers, on the first high mountain stage of the 2017 Tour de France.

Before the day’s heavy climbing began, the peloton approached the day’s single intermediate sprint still intact at kilometer 45. The sprinters were still present, with the exception of Arnaud Démare, who had detached on the first small ascent 10 kilometers prior to the sprint. Despite a full lead out by Quick-Step Floors, green jersey Marcel Kittel was edged out by André Greipel (Lotto-Soudal) as well as Michael Matthews (Sunweb).

After the intermediate sprint in Montrond, the main selection was made. A group of 46 riders rolled clear and built their margin on the flats prior to the first categorized climb of the day – the Col de la Joux. Sixteen riders went clear from the group of 46 on the first climb. 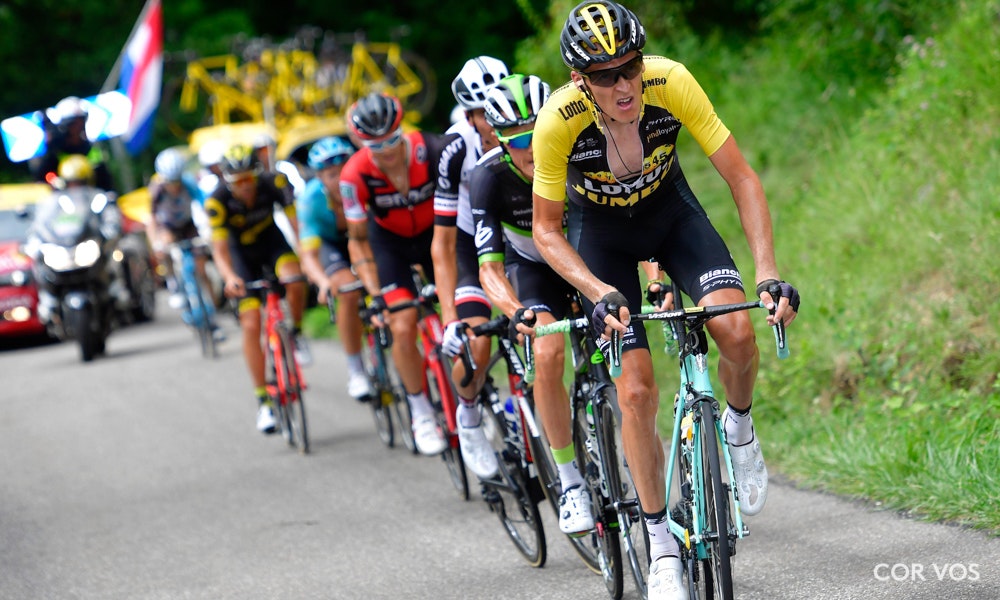 Robert Gesink (Lotto NL-Jumbo) led the remnants of the day’s breakaway on the final climb, before it split to pieces.

Over the summit of the Col de la Joux, Barguil and Pauwels rolled clear from the breakaway of 16. Barguil took the full KOM points atop la Joux.

The lead group of 46 reconvened and began to reshuffle on the descent off the Col de la Joux and into the second climb of the day, the Côte de Viry.

Greg Van Avermaet (BMC), Pauwels, Bakelants and Barguil finally rolled clear and instigated the final move on the descent off the Côte de Viry. They were joined by Nicholas Roche (BMC), Robert Gesink (Lotto NL-Jumbo), Simon Clarke (Cannondale-Drapac), and Calmejane on the lead in to the category one Côte de la Combe de Laisia- Les Molunes – the final ascent of the day.

“The plan was to try and get Greg Van Avermaet in the breakaway hoping that it would be less of a climbers’ group and he could play his card in the finish,” Roche said. “The race went bananas and there was a group of 45 riders so we had to have numbers there as we didn’t want to get caught like we did in the Dauphine. We learned there that it is easier to have riders drop back than try and bridge across. So we tried to ride aggressively and keep the race going.” Back in the peloton, on the descent off the Côte de Viry, Chris Froome and teammate Geraint Thomas overshot a corner despite Sky’s organization at the front. Thomas took a tumble but the yellow jersey of Froome was able to keep it upright. The pace of the field slowed as they made their way back to their designated spot within their enclave at the front.

“I’d just got up to the front and the boys went in [to the corner] a bit hot. I just looked back and obviously I was a second late to start braking and – off the road. It’s kind of like ‘Do you go down into the woods, or hit the hay bale?’ So I hit the hay bale and just flipped over the bars. Luckily I was straight back up and it was fine.”

Ninety seconds up the road, there was immediately aggression within the breakaway at the base of the 12 kilometer Côte de la Combe de Laisia-Les Molunes.

Barguil was the first to accelerate, and his pace detached Van Avermaet and Clarke. Bakelants was the next to go after a counter-move by Pauwels.

With eight kilometers to the summit, Roche attacked the remaining five in the breakaway. Pauwels accelerated and began to claw his way up to Roche as Barguil, after 100 kilometers out front, finally cracked.

With six kilometers to the summit, there were four riders remaining. Calmejane sensed an ease in the pace, rose out of the saddle, and accelerated. With a grimace, he immediately distanced himself from the remaining three. Gesink, in true form, slowly pulled away from Pauwels and Roche, and the chase was on.

“I went really deep,” Roche said. “Once I was up in that group there was two possibilities; one, I really wanted to make it to the top in case Richie was isolated from the chasing group and two; in the case that we arrive, I would give it a go. I really gave it everything.” Calmejane, taking KOM points over the summit of the Côte de la Combe de Laisia- Les Molunes, still had 12 kilometers of rolling terrain to the finish at Station des Rousses. Thirty seconds was his margin over Gesink, and he looked strong and steady until he faltered with a quadricep cramp at six kilometers out.

Calmejane was able to overcome the pain, however, and continued on ahead of Gesink for the win. Thrilled despite the physical suffering, he took his first Tour de France stage by 37 seconds as he fell off his bike upon crossing the line, legs disabled with cramps.

“It’s more than a dream, to win up here on my own, it’s just wonderful,” Calmejane said. “I had a few problems on the last climb. It was a shorter day today, an amazing stage and very difficult. There was a lot of attacking going on and at the end I had to be strong, I suddenly found myself missing some energy.”

Gesink could only acknowledge that the best rider had won.

“It was crazy from the inside … it was really hard to catch the right group, and that cost a lot of power and energy,” the Dutchman said. “In the end it was a strong group, and I tried to play my own game and yeah, I exploded a little bit trying to bridge towards the first and second … I’m proud of what I did, I did what I could and I have to be satisfied with the result. There are more chances coming up so we’ll see.”