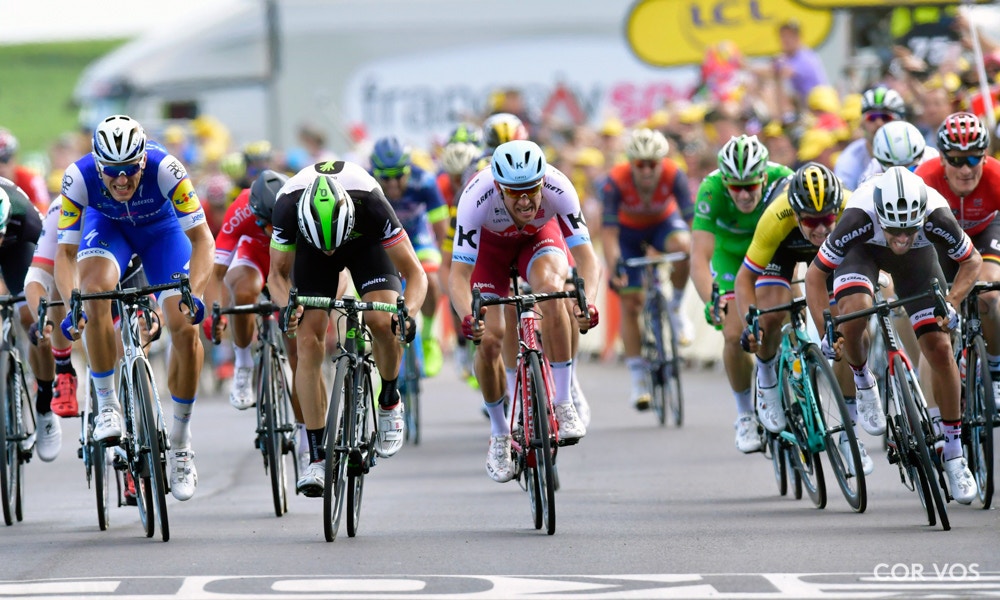 It was another day for the sprinters Friday on Stage 7 of the Tour de France, with Marcel Kittel (Quick-Step Floors) taking the win by an almost negligible margin over Edvald Boasson Hagen (Dimension Data). Michael Matthews of Sunweb was third on the day into Nuits-Saint-Georges.

“I really had no clue if I would have won it or not,” Kittel said. “On the finish line I thought this is going to be close. [On the bike throw] I tried to make myself three metres longer. At 150 metres to go, I was on Boasson Hagen’s wheel, we came around that [righthand] corner, and I thought it was 200 metres more, when it was much less. Then I knew I had to pray the door was open on the right side so I could pass him, and it was just enough.”

Maxime Bouet of Fortuneo-Oscaro was the first aggressor of the day from the moment Christian Prudhomme’s neutral flag dropped. Following him was Manuele Mori (UAE Emirates), Yohann Gène (Direct Energie) and Dylan van Baarle (Cannondale-Drapac). Their margin rose to just under two minutes by kilometer three, but they’d be kept on a short leash by the teams behind.

As with Thursday, Julien Vermote of Quick-Step Floors took the front of the field behind and asserted himself as the primary determiner of the time margin.

The four men would have their work cut out for them. Despite a flat profile, the wind was blowing strongly on the roads through vineyards on the 213km route from Troyes to Nuits-Saint-Georges.

The only intermediate sprint of the day came at 108 kilometers in Chanceaux. The breakaway was the first to reach it, with Bouet jumping early, attempting to claim maximum points. Mori jumped with Bouet, however, and overcame him right at the line.

In the field 1:40 behind, the battle for the green jersey continued. Six riders distanced themselves from the peloton to contest for the remaining sprint points. Sonny Colbrelli (Bahrain-Merida) triumphed, taking 11 points, with Alexander Kristoff (Katusha-Alpecin) taking 10. André Greipel was third across the line for nine points. Despite not contesting today’s intermediate sprint, Kittel took the lead in the green jersey points competition, ahead of Frenchman Arnaud Démare (FDJ).

The only climb of a day, the category four Côte d’Urcy, came at 148 kilometers. Maxime Bouet took the point from the breakaway. 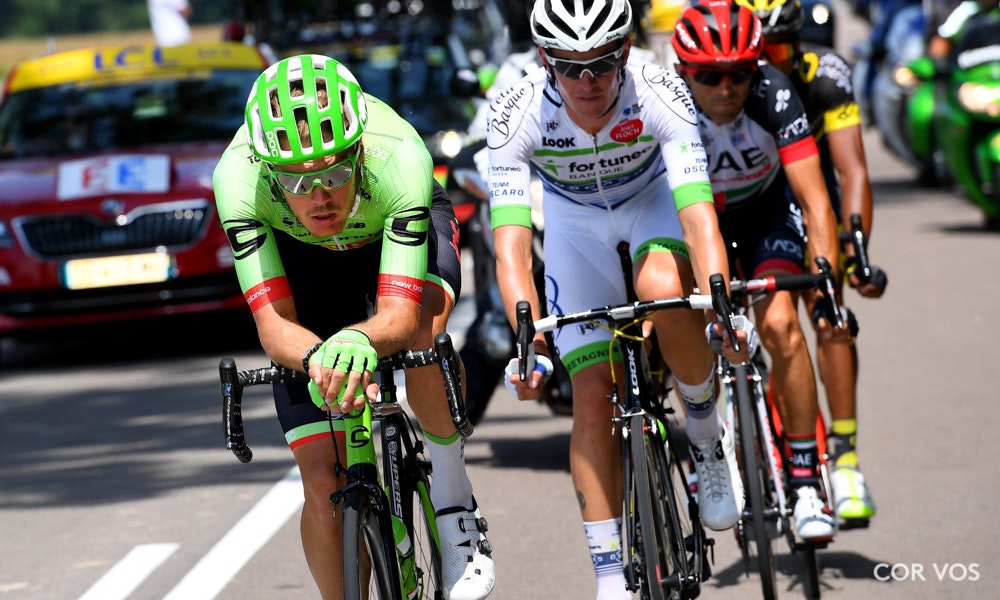 With 42 kilometers remaining, the fight for position commenced back in the field. A technical entry into the town of Gilly-lès-Cîteaux was directly followed by an exposed section of road with a hard crosswind. Sky imposed themselves at the front of the field and accelerated, stringing out the field on the narrow roads.

After the acceleration in the peloton, the breakaway’s margin decreased to under a minute. Team vehicles were removed from the gap and it looked to be an early conclusion for the men out front. 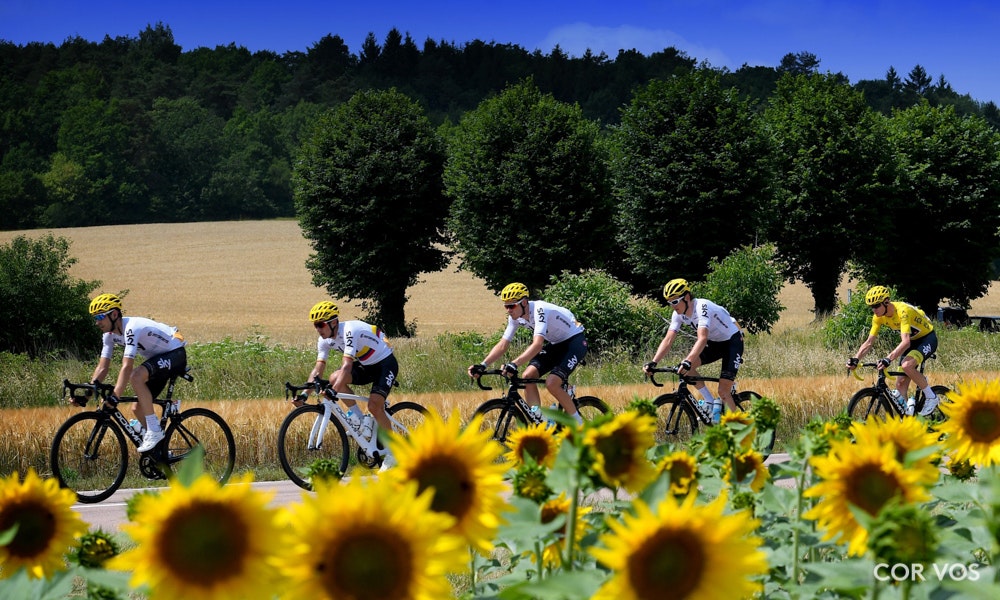 Philippe Gilbert led the men of Quick-Step Floors to the front with 12 kilometers remaining. Kristoff’s Katusha-Alpecin teammates lined up directly behind the blue train, with Tony Martin at the helm. At the front, Gilbert grimaced as the peloton behind began to slowly stretch out with the increased tempo. After final attempts by Bouet and Mori, the breakaway was finally reeled in at six kilometers to go.

Orica-Scott took control with four kilometers remaining– the tailwind plus the savagely fast pace inching the speed of the peloton over 75 kph. It looked to be a hectic finale yet again with Frenchmen Démare and Bouhanni bumping hard inside three kilometers.

It looked to be a battle between Boasson Hagen and Matthews, but again, Kittel’s final kick of speed inside the last 50 meters brought him the win. Neither Boasson Hagen nor Kittel celebrated at the line, as the win was undetermined until closer examination of the high-speed camera.

“The team did so well today. They took me all the way to the line with a perfect leadout,” Boasson Hagen said. “It’s a pity I couldn’t finish it off. However, I’m happy with this second place even though I would have liked to take the win. I’m not a pure sprinter, so to be able to be up there on these flat stages gives me a lot of confidence for the remaining part of the Tour.”

After only one victory at the 2016 Tour de France and none during his difficult 2015 season, Marcel Kittel looks to be back on the form and confidence that allowed him to win four stages each at the 2013 and 2014 events. Kittel’s twelfth stage win today equals compatriot Erik Zabel’s record.

“It’s an incredible success to have 12 stage wins at the Tour de France,” Kittel said. “I’m in great shape. I’m super happy the team has supported me so well. We had a good lead out, we really believed in this chance, in this victory. Being back in the Tour de France, after my successes in 2013 and 2014, already with three stage wins, it’s incredible. I’m so happy. I enjoy every minute of it.”