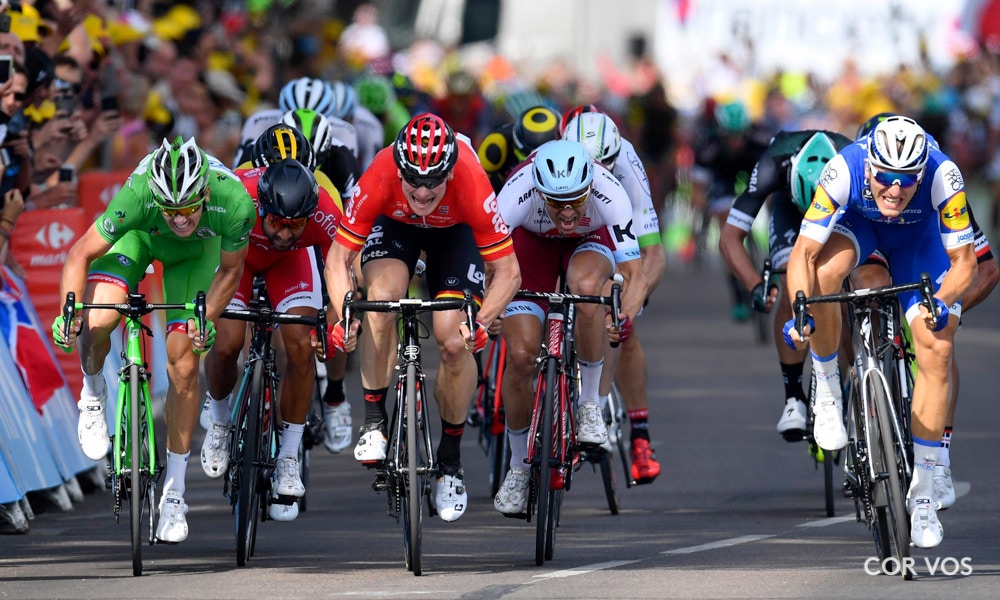 The big German sprinter came from behind to best Frenchman Arnaud Démare (FDJ) and compatriot André Greipel (Lotto-Soudal) who took second and third, respectively. Kittel didn’t make his final move until 75 meters out, the headwind final making a sprint from behind advantageous.

“In the sprint, I tried to follow Arnaud Démare, but then I found an opening and could start my sprint one second ahead of the rest, which gave me the chance to pass them on the left side,” Kittel said. “You know, despite two of the main sprinters being out of the race, it still was very hectic and tense today. A victory doesn’t come easy and I don’t take anything for granted, so to win again gives me a special feeling.”

After an intense summit finish on yesterday’s Stage 5 to La Planche des Belles Filles, the peloton rolled out slowly from Vesoul for Stage 6.

The day seemed to function as a rest day for many of the GC riders and their teams going into this weekend’s mountain stages. It was going to be a day for the sprinters, with two Category 4 climbs on tap along with a perfectly flat run into the town of Troyes.

It would be a more open race in the the absence of Peter Sagan (Bora-Hansgrohe) and Mark Cavendish (Dimension Data), another chance for the sprinters who missed out on the chaotic finish in Vittel.

Perrig Quemeneur (Direct Energie) was the first aggressor after the neutral flag dropped. Frederik Backaert (Wanty-Groupe Gobert) and Vegard Stake Laengen (UAE Emirates) were in tow, and the trio quickly distanced themselves from the field. Their gap rose to over four minutes by kilometer 30, as behind, the main field took lunch and conversation.

The sprinters’ teams wouldn’t have a day completely in the absence of work, however, with Nacer Bouhanni’s Cofidis squad and Kittel’s Quick-Step Floors teammates taking control of the chase. FDJ and Lotto-Soudal – working for sprinters Démare and Greipel — also took part in the chase. 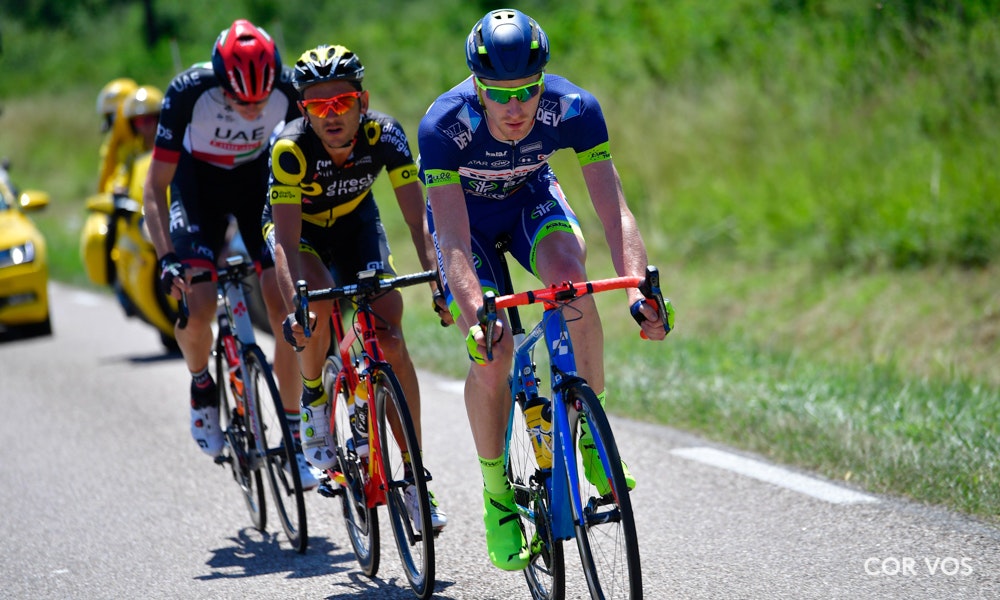 There was one intermediate sprint at 135 kilometers into the stage, taken by Backaert within the breakaway. Behind in the field, it was a battle of the sprinters and the 13 points for fourth across the line were taken by Démare – bolstering his lead in the green jersey points competition. Michael Matthews (Sunweb) and Greipel took 11 and 10 points, respectively.

With 20 kilometers remaining, the gap was under one minute. The pace in the peloton picked up, and a crosswind began to force diligent positioning for the riders in tow.

At eight kilometers out, the gap was under 30 seconds and the catch was inevitable. Quemeneur, Backaert, and Stake Laengen were finally caught at under three kilometers to the finish as world time-trial champion Tony Martin and his Katusha-Alpecin teammates arrived at the front and took a turn of speed for teammate Kristoff.

Quick-Step Floors moved up as a unit with Kittel at the back of their blue train and dropped him off into the last kilometer in perfect positioning. Edvald Boasson Hagen (Dimension Data) started his sprint from 500 meters out and functioned as a lead out for the men behind him. It looked to be Greipel’s race at 100 meters out, but Kittel, from behind, sling-shotted out of the draft and overtook Greipel and Dèmare for the win.

Kittel took the win, but Dèmare retains the green jersey, leading the competition with 170 points to Kittel’s 143.

“The green jersey is in my focus, but what is most important is to get points in stage victories, that is what counts,” Kittel said. “For the rest, I will try in the intermediate sprints, and then we will see.”

Démare could only acknowledge that he’d been beaten by the better sprinter on the day.

“I believed in my chances when I was starting to overtake Greipel,” he said. “And then I saw a blue wing fly past me on the left. From where I was trying to go on the right, it was really on the edge. I was not 100% in my sprint, more focusing on my line. I have no regrets. I keep scoring points for the green jersey and that’s reassuring. There is a big battle with Kittel. He has two wins but in the intermediate sprint, I played it well. The Tour is very long and we cannot say it’s in the bag. Tomorrow, we’re at it again.”

There was no change in the general classification, meaning Chris Froome (Team Sky) retains the maillot jaune. Adam Yates (Orica-Scott) stays in the white jersey of best young rider, and Fabio Aru (Astana) will spend another day in the polka-dot jersey as King of the Mountains.

“As far as the Tour de France goes, it was as relaxed as it gets for us GC guys,” Froome said. “You just try to stay out of the wind, stay in the wheels and save as much energy as you can for the days coming up.”

Asked if Team Sky intends on defending the yellow jersey all the way to Paris, Froome said not necessarily — depending on which riders slip up the road.

“I wouldn’t mind giving the jersey up to a breakaway of guys with 15 or 20 minutes who don’t worry us too much about the GC,” he said. “I wouldn’t be too happy to give it up to any one of my rivals.”