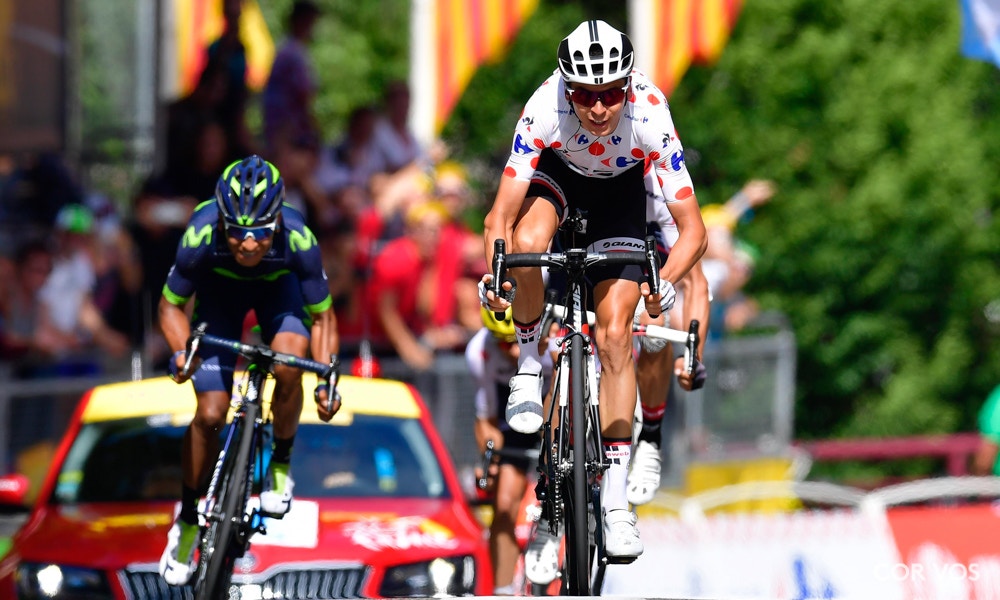 Frenchman Warren Barguil (Sunweb) was victorious on Stage 13 of the Tour de France on Friday, out-sprinting Nairo Quintana (Movistar) and Alberto Contador (Trek-Segafredo) on a technical finale out of a breakaway group of four riders that also included Team Sky’s Mikel Landa.

Barguil, clad in the polka-dot jersey as King of the Mountains, crossed the line first amid raucous crowds on Bastille Day, the first French stage win at the Tour on their national holiday since 2005.

The win came as vindication for Barguil, who was denied victory on Stage 9 after a photo finish determined Rigoberto Uran (Cannondale-Drapac) had narrowly beaten him.

“It’s exceptional to win on Bastille Day, I’m super happy.” Barguil said, ecstatic after his win. “I saw that Contador was attacking, and I got onto his wheel. I took the outside of last corner, and I was the quickest of the four riders. I’m super happy. To beat Alberto Contador is an exceptional feeling, he’s always been one of my idols, so to beat him is amazing.”

The finish in Foix came at the conclusion of a short but difficult day — only 100 kilometers, but with three Category 1 climbs. The finish came after the descent off the final climb of the Mur de Péguère, and a 10km flat run-in. The final kilometer delivered multiple corners, requiring the winner of the day be not only strong, but technically astute.

Landa moved up a position on the general classification for his efforts on Stage 13, now just 1:09 behind Aru, while Quintana moved into eighth overall, 2:07 down. Aru retains yellow, with six seconds over Froome.

Dane Jakob Fuglsang (Astana), winner of the Criterium du Dauphine in June and a critical domestique for Aru, was forced to abandon after a Stage 11 crash resulted in a fractured wrist and elbow.

“It was a spectacular day, it was a great day, I’m just smiling, I’m so happy,” said Aru after the finish in Foix. “I just tried to stay calm, without stress. It’s bad news that Fuglsang abandoned. We saw the crash two days ago. It’s a big loss for us. We’ll recover tonight and try to look after this jersey tomorrow.”

The 13th stage of the 2017 Tour de France was designed to instigate chaos. The stage from Saint-Girons to Foix included three Category 1 climbs over only 100 kilometers. The course designers got their wish, as from the gun, aggressiveness pervaded despite tired legs from Thursday’s difficult stage.

The combativeness demonstrated seemed to emulate that of a one-day classic, with numerous attacks all the way into the final kilometers of the race.

Drawing inspiration on their national holiday, the French were the first aggressors. Barguil, ultimately the stage winner, was the first rider to go. French veteran Thomas Voeckler (Direct Energie) followed. The peloton, not yet content to let something roll, brought the duo back.

Countering the initial move was yet another standby of French cycling, Sylvain Chavanel (Direct Energie), drawing out Alessandro De Marchi (BMC Racing) and Philippe Gilbert (Quick-Step Floors). The trio began to ascend the first climb of the day, the 6km Col de Latrape.

Discontent with his partners, De Marchi attacked with three kilometers to the summit of Latrape. Chavanel and Gilbert, fatigued from their effort on the first climb of the day, drifted back to the already-fractured peloton.

Yet again, Barguil accelerated and left the peloton, aiming to bridge to the two out front, who were holding onto a narrow gap. Following him was Alberto Contador (Trek-Segafredo) and Mikel Landa (Team Sky). De Marchi crested the Col de Latrape with 15 seconds over the three chasers, taking 10 KOM points in the process. Barguil, leading the pursuing trio, received eight KOM points, solidifying his lead in the competition.

“I woke up this morning with very bad feelings. But I had a good talk and a good look at the different climbs with [sport director Steven de Jongh] on the way to the start and I said I’d attack in the first climb if possible,” Contador said. “I’m hoping to keep getting better and better with all the injuries I have. For the moment, this Tour de France pushes me to my limits. I prepared for the race very well. I even set a new record in my training climbs before coming to the Tour but I had a very bad crash in the first mountain stage. But I still want to fight till the end and repay Trek-Segafredo for the confidence they have in me.”

The four leaders began the descent off the Col de Latrape, De Marchi holding a narrow margin. The Italian was caught by the three behind heading into the next climb of the day, the 10km Col d’Agnes.

Contador was the first aggressor, followed by Landa. De Marchi and Barguil were distanced from Landa and Contador, but Barguil had alternative plans.

“I think Contador was a nice wheel to follow. He is a very good rider in those kind of stages and I followed him,” Landa said. “I thought about the stage win but I knew it was difficult.”

Behind, in the 21-rider main field, Cannondale-Drapac domestique Alberto Bettiol led the chase along with Diego Ulissi (UAE Team Emirates)

Sky’s plans seemed to adapt as up front, Landa began working with Contador. Less than three minutes down in GC, sitting seventh, Landa could function as an alternative GC contender to their perennial leader, Chris Froome. After visibly receiving the go-ahead over race radio, Landa took the front on the Col d’Agnes. 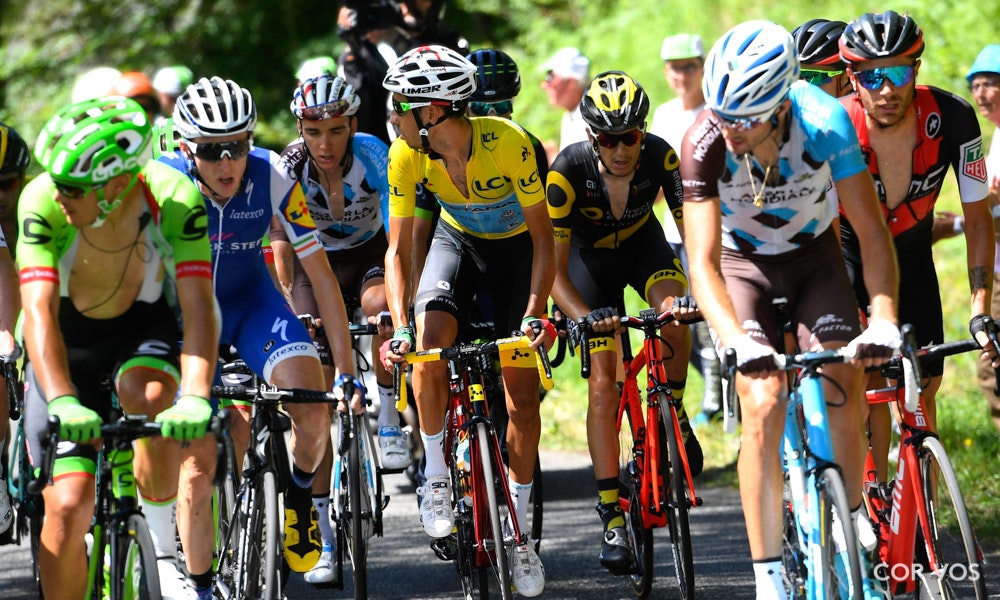 There was a lot of looking around within the GC group on Stage 13 from Saint-Girons to Foix.

Behind, 30 seconds back, rode the chase group of Barguil, Quintana, and Kwiatkowski. Vuillermoz and Betancur had been distanced. Barguil, doing the majority of the chasing, was visibly motivated to make the catch.

The trio brought back another 20 seconds on the descent. Onto the lower slopes of the final climb of the day, the Mur de Péguère, the leaders were visible and within reach. It would take the entire ascent, however, for the chasing three to gain contact.

Behind, it appeared as if Froome was in difficulty. He drifted to the back of the now seven-rider yellow jersey group on the 18% slopes of the Mur de Péguère. The formidable group ahead of him also contained GC leader Fabio Aru (Astana), in addition to Dan Martin (Quick-Step Floors), Rigoberto Uran (Cannondale-Drapac), Romain Bardet (Ag2r La Mondiale), white jersey Simon Yates (Orica-Scott), and Louis Meintjes (UAE Team Emirates).

Ahead, Barguil and Quintana finally joined Contador and Landa, only 500 meters from the summit of the Mur de Péguère. Barguil led over the summit, receiving full KOM points.

In the chase group 2:30 behind, Froome was resurgent, attacking near the summit. Aru didn’t hesitate in the slightest, immediately attaching himself to the wheel of the defending champion. Uran vigilantly covered Froome as well, but the seven immediately came back together on the descent.

After numerous attacks on the descent by Martin and Uran, none of which stuck, the seven proceeded into the final flat 10 kilometers leading into the finish in Foix.

Again, with nothing to lose, Martin attacked. This one looked as if it would last. The white jersey of Simon Yates followed, and the two converged with five kilometers to the line.

Two minutes up the road, the leading four entered the final kilometer. Landa led — on his wheel, Barguil, Quintana, and Contador.

Contador was the first to jump, sprinting from fourth wheel at about 500 meters from the line. Barguil followed, immediately attaching himself to the Spaniard’s wheel.

Around the final right-hander, Barguil jumped Contador to his outside, leaning hard into the corner. Barguil’s momentum through the corner allowed him a gap upon its exit, and rising from the saddle, he held it to the line.

This time, there would be no photo finish inquiry needed.

“I’ve been looking for success for a long time,” Barguil said. “I’ve been close on several occasions so to win on Bastille Day and being the first Breton stage winner for a long time [1993] makes me super happy because I feel like I have the double nationality [French and Breton]. Beating Alberto Contador who I mimicked when I won races as a young rider in Brittany means a lot to me. I’ve been criticized on social media for losing time on purpose but I came to the Tour de France with the only goal to finish it.

“Two months ago I was on a bed at hospital and when I resumed racing at the Dauphiné, I got dropped on the first day along with the sprinters. Being fresh helps me perform at the Tour now. I’m close to my top form but I had to spend some time at the back of peloton to be able to enjoy those moments in the mountains. Now I wish Romain Bardet to win the Tour de France. I’d like to be part of the spectacle in the Alps and help him out if it happens. It would be a great satisfaction for us to have a French winner of the Tour de France.” 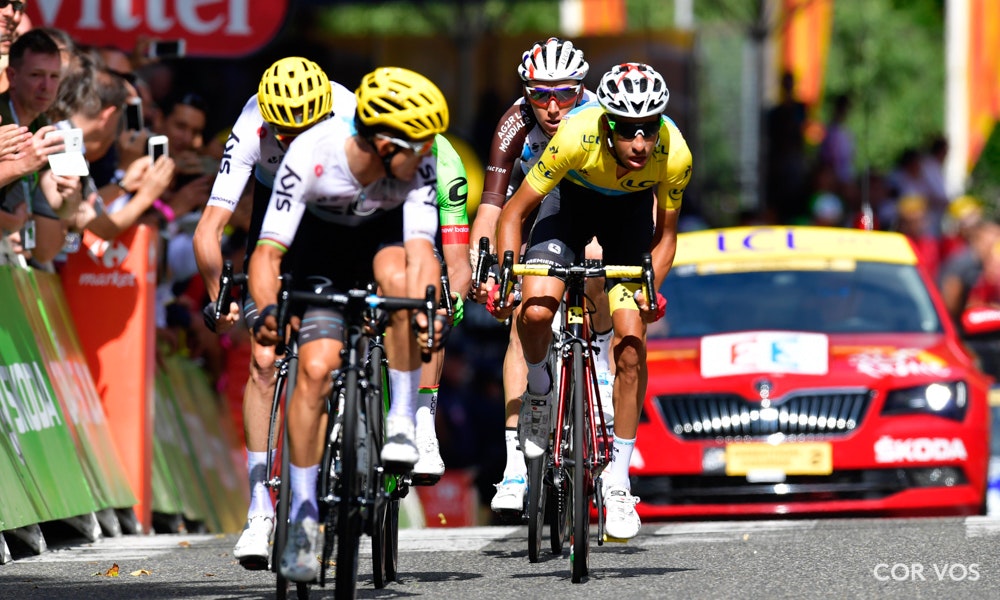 Meanwhile Aru was thrilled after his first day defending the maillot jaune of the Tour de France.

“I was expecting attacks from everyone,” Aru said. “So I focused on following those who were the closest to me on GC. I know [former teammate] Mikel Landa very well. He’s strong but he had more room because he was three minutes adrift. Now that he’s back up, I won’t give him so much freedom again. Had I tried to follow everyone, I could have gone in a state of crisis because it was a hard and fast race. I’m satisfied with the outcome.” 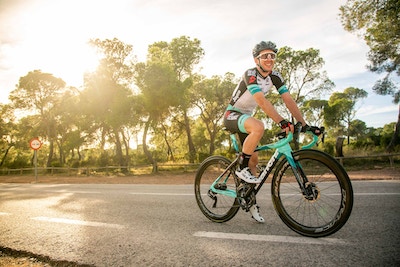