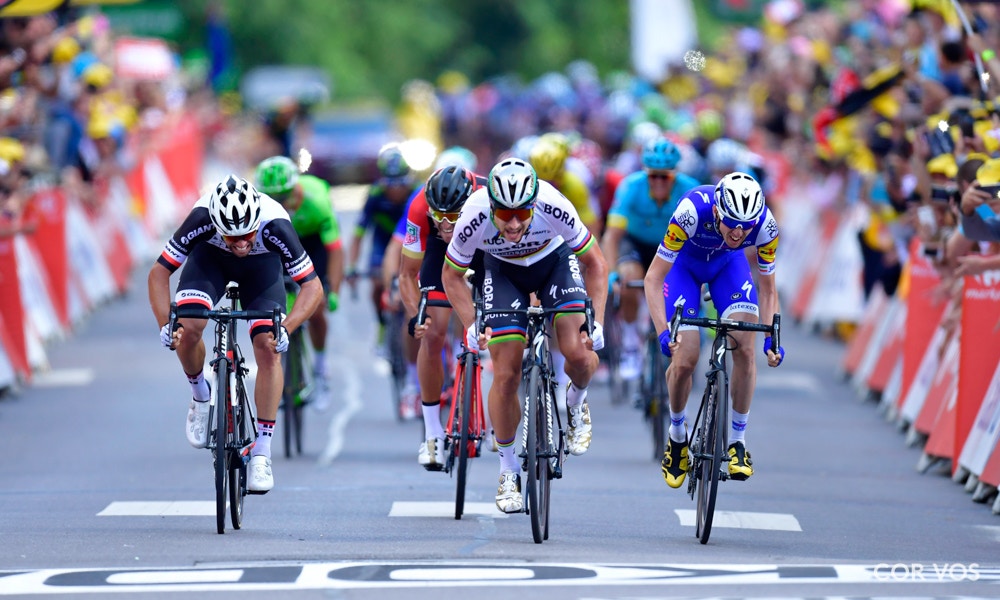 Even with a cleat pulled from the pedal in the final 300 metres, world champion Peter Sagan was able to hold off Michael Matthews and Dan Martin to win Stage 3 of the Tour de France.

The Bora-Hansgrohe rider won the 212km stage that began in Belgium, traveled through Luxembourg, and finished in France, atop the 1.6km Cat. 3 climb, the Côte des Religieuses at Longwy.

It was Sagan’s eighth Tour stage win, and one of his most memorable, as his strength and agility made up for a pedal slip that might’ve ended many riders’ hopes.

After Richie Porte attacked inside the final kilometer, Sagan reeled in the BMC Racing leader and rode at the front. He looked positioned to hold off the bunch, but as he wound up his sprint, his foot slipped from his pedal. Sagan’s mistake gave hope for Matthews (Sunweb) to take the victory, but the world champion was able to return to speed and hold off the Australian.

Asked if he had felt pressure to win on a stage that seemed tailormade for his abilities, Sagan just smiled. “What is pressure? I don’t know what it is.”

Race leader Geraint Thomas (Team Sky) finished eighth, just ahead of defending champion and teammate Chris Froome, meaning there was no change in race leadership, though Froome moved into second overall, 12 seconds behind his teammate.

“First I have to say thanks to all of my team, they did an amazing job all day riding on the front,” Sagan said. “It was not easy, first with the headwind, and then it was very technical at the end, and there was a lot of stress in peloton.

“In the end, it was a pretty hard climb. BMC did a good job for Richie, and then he attacked in the last 800 metres and got a gap. I said, ‘Okay, I will go,’ but I caught him early, at 400 metres to go, and that seemed too far away. At that moment, I thought, ‘Oh no, I went too early again.’ Then I started my sprint and pulled my foot out of the pedal, and I thought, ‘Another mistake, what is happening today?’ But I went ahead. Michael Matthews almost beat me, so I am very happy for this victory.”

Sunny skies greeted the peloton for the 212.5km route from Verviers to Longwy, which was contested in three different countries: Belgium, Luxembourg, and France.

After 10km, Nils Politt (Katusha-Alpecin), Adam Hansen (Lotto-Soudal) and Romain Hardy (Fortuneo-Oscaro) opened a 20 second lead over Romain Sicard (Direct Energie), Frederik Backaert (Wanty) and Nate Brown (Cannondale). Before long, it was a six-man breakaway that would spend the day together, off the front.

After 82.5km of racing and one Cat.4 climb, won by Brown, the gap hovered at just under two minutes.

After the Cat. 4 Côte de Wiltz, won by Politt ahead of Backaert, Politt and Brown rode away from the rest of the breakaway. With each rider haven taken max points on the first two Cat. 4 climbs, it looked to be a two-man battle to the top of the next climb, the Cat. 3 Côte d’Eschdorf, which quickly followed the Côte de Wiltz. However Brown attacked and went clear, taking the lead in the KOM competition with two categorized climbs remaining.

With 92km to go, the gap from Brown to the yellow jersey was over 3:40; he held a 50-second lead over Politt, but sat up over the top of the Côte d’Eschdorf and waited. However with Politt also sitting up to wait for the rest of the breakaway, it was a six-man move once again with 90km to go, and the gap up to four minutes.

The gap came down quickly, and with 60km to go, just one minute separated the leaders from the main bunch.

Shortly after, a crash in the bunch saw several riders down, including Alexis Vuillermoz and Oliver Naesen (Ag2r La Mondiale), and Dario Cataldo (Astana).

With 57km to go, the three bridging riders made contact with the six at the front, making a nine-man group with two from Lotto-Soudal, two from Fortuneo-Oscaro, and two from Direct Energie.

However as De Gendt and Hansen took pulls at the front, Sicard struggled to hold the wheel. Behind, riders from Bora-Hansgrohe and Quick-Step Floors drove the chase.

With 47km to go, Politt jumped on a slight ride in the road, Calmejane, De Gendt, and Périchon jumped clear, with Hardy bridging across to make four at the front, including two wearing the white jerseys of Fortuneo-Oscaro.

As the pace picked up and riders like Politt, Brown, and Hansen were swept up by the bunch, last year’s second-place finisher Romain Bardet (Ag2r) had a mechanical issue that required a bike change, losing 30 seconds to the bunch. Teammates Cyril Gautier, Axel Domont and Ben Gastauer dropped back to help Bardet return to the peloton. 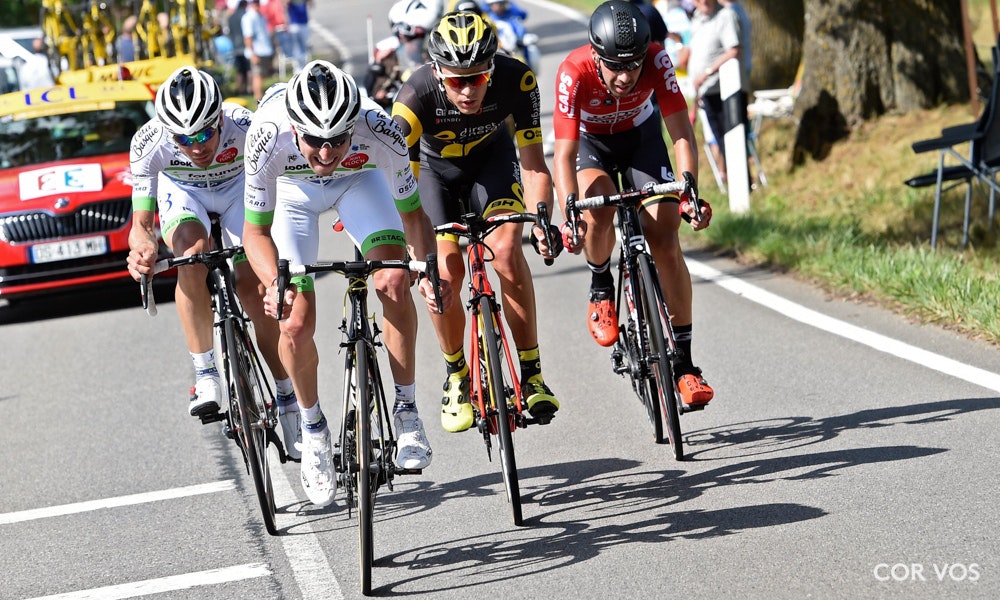 First Hardy and then De Gendt dropped from the four-man lead group, and with 21km to go, Calmejane rode clear of Périchon as the gap to the yellow jersey came down to 50 seconds.

At 10km Calmejane was caught, and the battle for the stage win was reset.

BMC’s Alessandro De Marchi came to the front to help, with Porte moving up. Alberto Contador (Trek-Segafredo) sat third wheel, while Sagan was not in great position, four or five wheels back and momentarily boxed win.

Porte attacked with about 900 metres to go, and opened a gap.

“I was put in a fantastic position there in the final,” Porte said. “I felt good but with 500 meters to go, I knew it was a bit too far out. All of the guys chipped in today and they were really strong. It’s good for the confidence to have a bit of a crack.”

After Sagan closed the gap, he went to the front. As he opened up his sprint, his right foot disengaged from the cleat. Sagan calmly found the pedal and clipped back in, continuing his sprint to the line.

“I wanted to go a little bit earlier and surprise Peter a bit and take his wheel,”Van Avermaet said. “But then he lost his pedal and he restarted his sprint again with me next to him and in the wind. This killed me a little bit I think.”

“I’m here for helping Romain Bardet. That’s my priority,” Latour said. “I saw that Stefan Küng couldn’t hold our pace but I didn’t think he’d lose 20 seconds so I didn’t expect to take the white jersey. It doesn’t change anything for me. I’m at the Tour for learning alongside Romain. He had a mechanical today. He changed his bike and some guys brought him back. I discover how nervous the Tour is. The crowd adds some stress. It’s not a race like any other.” 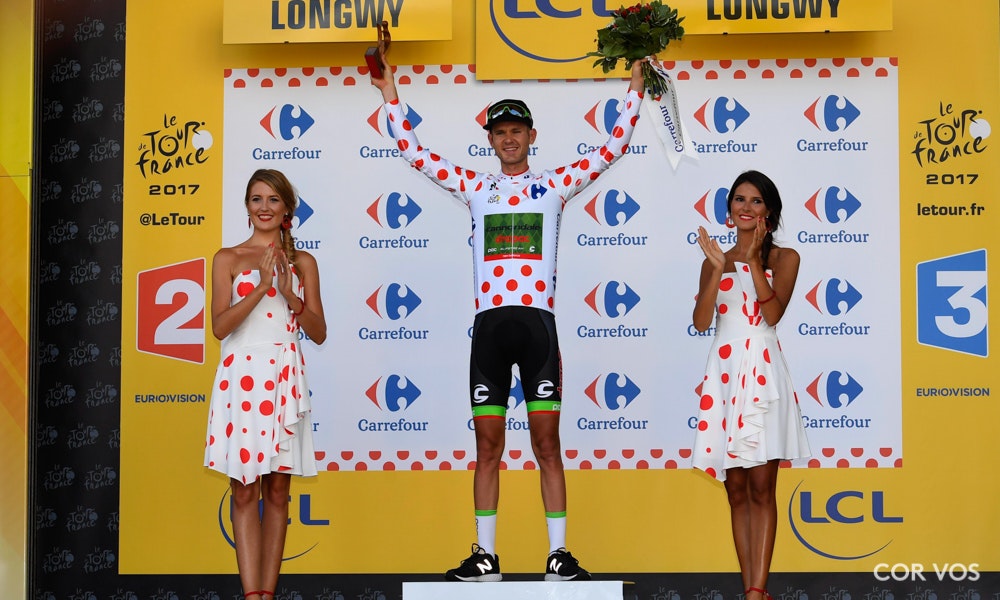 American Nathan Brown (Cannondale-Drapac) earned the KOM jersey on Stage 3 of the 2017 Tour de France, from Verviers to Longwy.