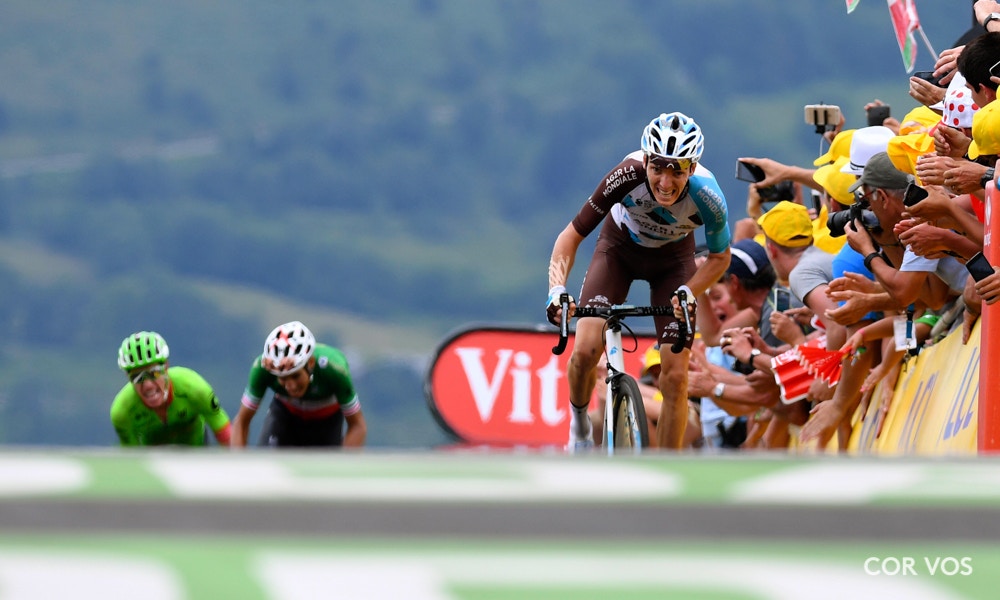 Frenchman Romain Bardet (Ag2r La Mondiale) took an emphatic Tour de France stage victory Thursday atop the steep Category 2 climb to Peyragudes, accelerating away from a select group of GC contenders in the last 100 meters on a 16% grade.

“It’s my third Tour de France stage win in three years,” Bardet said. “I took my chance. I did a recon of the last part, so I knew it, and I went full gas. I’m happy to be able to finish like that. I controlled my attacks all day until final 200 metres.”

Aru took a four-second time bonus at the line, as race leader Chris Froome (Team Sky) was distanced going into the finish, finishing 22 seconds behind Bardet and 20 seconds behind Uran and Aru, relinquishing his GC lead to the Italian champion — the first time he’d lost the yellow jersey on a climb since he first wore a maillot jaune in 2013. In 2015, Froome relinquished the yellow jersey to Tony Martin for three days during the first week, but he had never before relinquished the race lead to a GC contender, and never in the mountains.

“It was a very, very hard finish,” Froome said. “I didn’t have the legs in the finale, but there is still a long way to go. I just want to say congrats to Romain Bardet for winning a great stage and to Fabio Aru for taking the jersey. I had a bad moment there at the end. No excuses. I just didn’t have the legs in the finale. It’s close. It’s going to be a great fight now all the way to Paris.”

Aru now leads Froome by six seconds on the general classification, with Bardet in third at 25 seconds.

“It was a very difficult day, it was rainy, so it was a little bit difficult early,” Aru said. “Team Sky was setting a hard tempo all day. I was concentrating on my general classification, but I threw it all out there at the end. Congratulations to Romain Bardet for beating me at the end, but I’m very happy to be wearing this yellow jersey.” 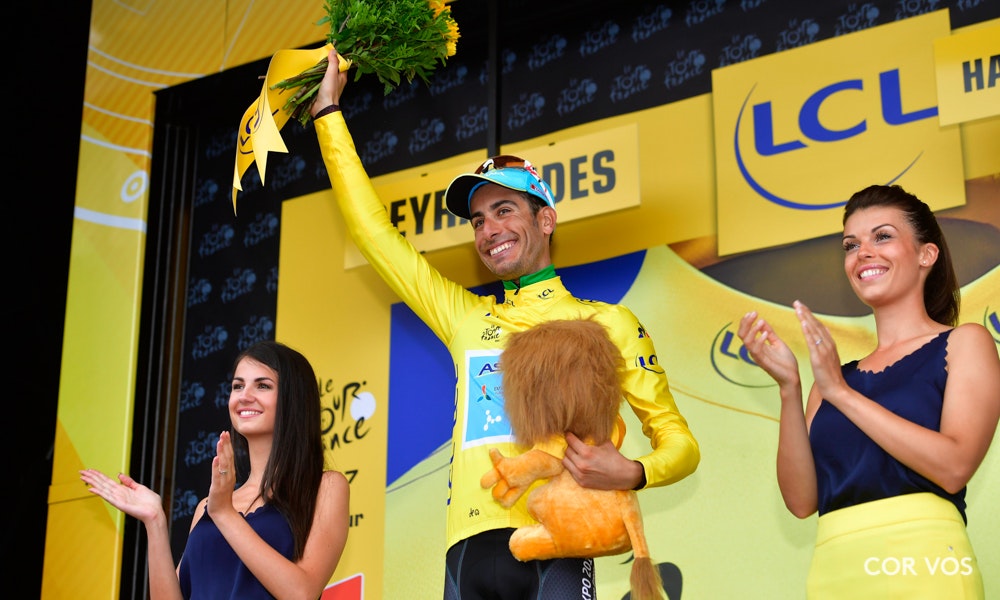 Uran was handed a 20-second penalty for taking a water bottle from a Cannondale employee inside the final 10km, moving him from 35 seconds back of Aru to 55 seconds, though he maintains his fourth-place position on the general classification. Kiwi George Bennett (LottoNL-Jumbo), who finished just behind Froome on the stage, was also handed a 20-second penalty, and sits ninth on GC, at 4:24. Video of Bardet also taking a bottle from a spectator inside the final kilometres apparently did not reach the race jury, as he was not penalized.

Among the biggest losers of the day were Grand Tour champions Alberto Contador and Nairo Quintana. Quintana (Movistar) was unable to hold the pace with 12km remaining, while Contador (Trek-Segafredo) lost contact at the top of Peyresourde with 5km to go; they both finished over two minutes down. Quintana now sits eighth overall, 4:01 back, while Contador is 11th, 7:14 behind Aru.

As always, a spot in breakaway was a sought-after position on Stage 12.

Green jersey Marcel Kittel (Quick-Step Floors) was also in the mix with Michael Matthews (Sunweb) — two sprinters in the move targeting the intermediate sprint 100 kilometers in at Loures-Barousse.

Matthews narrowly overcame Marcel Kittel at the intermediate sprint, receiving 20 points for his efforts. Kittel acquired 17 for second, and continues to hold a comfortable lead in the green jersey competition.

After making sure he scored points at the intermediate, Kittel’s job for the day was finished, and he drifted back to the peloton after cresting the second climb of the day, the Col des Ares, with the breakaway.

THE RACE RESETS ON THE PORT DE BALÈS

The breakaway proceeded to the base of the only HC category climb of the day, the Port de Balès, at 185 kilometers into the day. With just over 40km remaining, the gap to the peloton, led by Team Sky, was four minutes.

De Gendt was the first instigator of pace, accelerating at the front of the break 5km from the top of the Port de Balès. His move drew out Cummings, who caught and passed the Belgian, going solo 3km from the top. The British champion hit the bottom of the Category 1 Col de Peyresourde with a two-minute lead over the yellow-jersey group.

“This is a completely different kind of racing than last year,” De Gendt said. “Then, a break had already survived a few times by the third weekend. Now Sky sets a very high pace and doesn’t give enough advantage for breakaways to get to the finish. I felt good and the same went for Cummings. Four minutes advantages with still a few climbs on the course is just too small of a gap.” 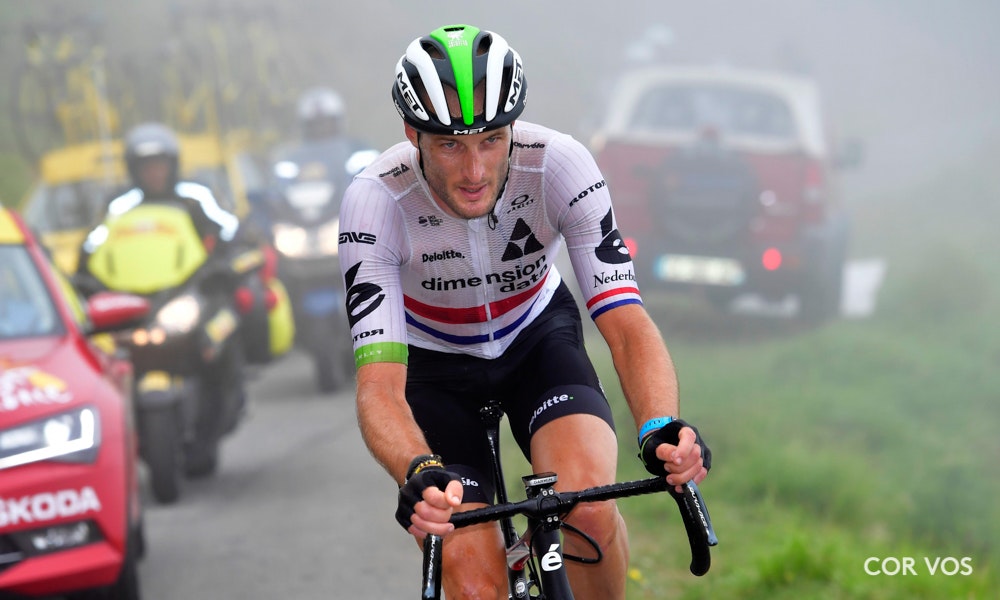 Steve Cummings (Dimension Data) went clear of the breakaway, but was caught with 8km to go.

As the peloton hit the bottom of the descent off the Port de Balès, Sky’s Mikel Nieve overshot a corner and went off into the grass, threading the needle between two parked caravans. Froome and Aru followed, and while none of them crashed, all three riders were forced to come to a stop, losing contact with the GC group. A truce was called among the main GC contenders, and Froome and Aru quickly rode back to the favorites on the lower slopes of the Peyresourde. 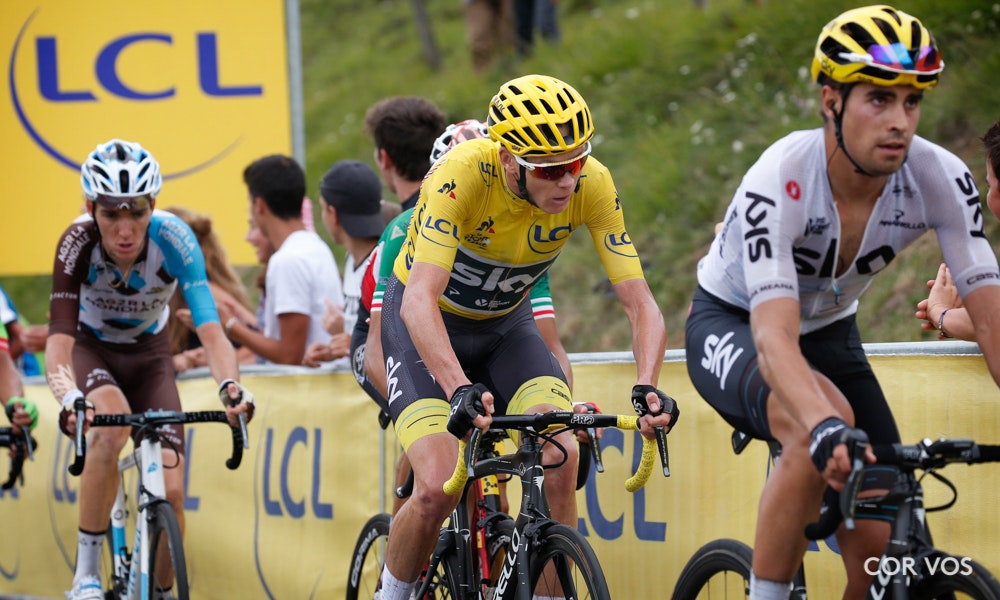 Chris Froome (Team Sky) was paced by teammate Mikel Landa in the closing kilometers, but lost contact as the gradient got steeper.

Landa took over duties in the final kilometres, pushing a pace so difficult attacking appeared impossible. Bennett was first to give it an effort, only to be reeled back quickly. Into the final kilometre Aru attacked, putting Froome into difficulty. Bardet caught and passed Aru, with Iran in tow. Landa left Froome behind, presumably to steal away bonus time at the line, but the Spaniard could only manage fourth on the stage behind the Bardet, Uran, and Aru in that order.

“It’s a stage that I know well,” Bardet said. “I had reconnoitered it entirely in May. It was still gravel then. I was the first to be able to ride it when it was paved. The local people there told me that that would bring me good luck. Standing on the podium, I had to think of that again. It was a nice way to conclude the story. Today’s victory is a collective victory for the team. We are a great team, ready to fight for the yellow jersey. In the overall, four riders are very close together still. I hope to finish strong, though I have no plan for a rerun of today. We’ll take each stage day by day, but why not try again when we are in the mountains?”

Froome finished 20 seconds back of Aru, ceding the yellow jersey.

“I want to thank my team, who supported me and kept me in front the whole day,” Aru said. “The last climb was very fast and steep. I attacked with more or less 350 meters to go and gave my all. I congratulate Romain Bardet with a nice victory. But for me it is a great trophy to get this yellow jersey. Unfortunately, yesterday Dario Cataldo was forced to quit the race after the crash. Also, Jakob Fuglsang had a terrible day today, he rode with an injury. So, I want to dedicate this yellow jersey to them and also to the entire team, who stayed close to me in these days.”