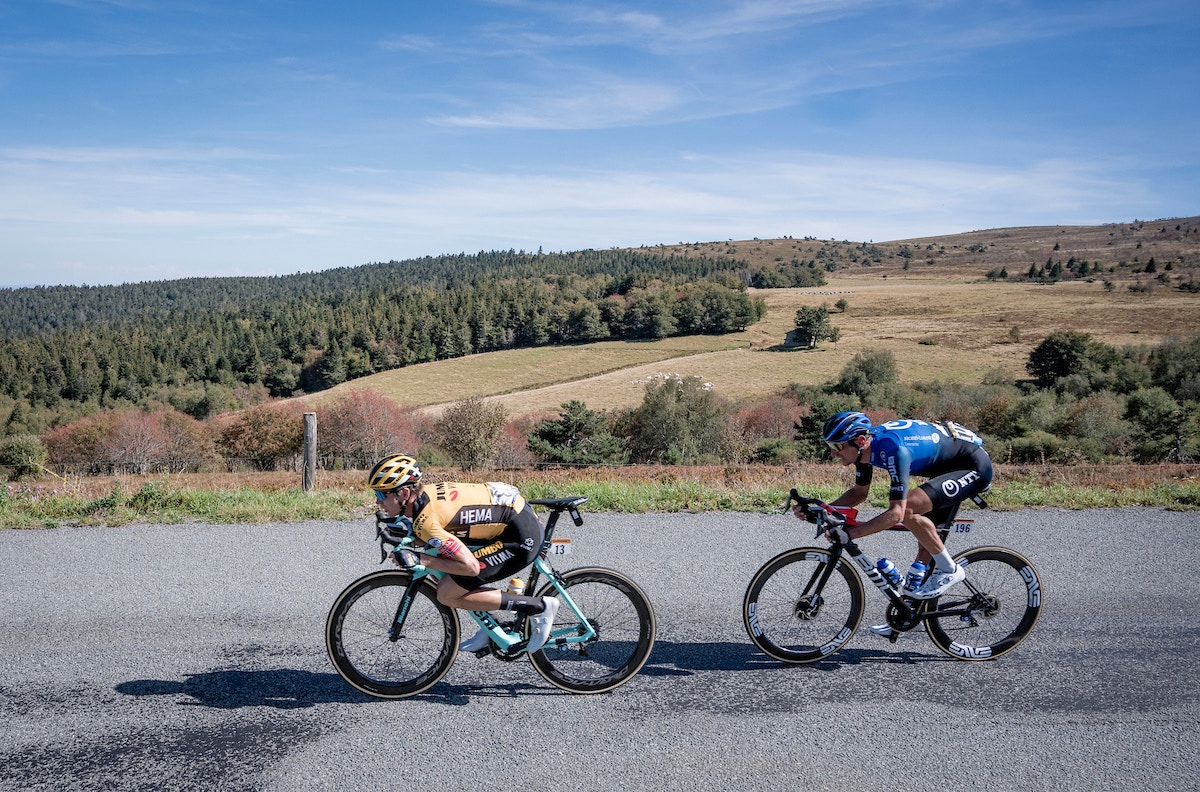 Søren Kragh Andersen attacked in the final kilometres of stage 14 of the Tour de France to take the second stage win of the race for Team Sunweb.

The German team attacked repeatedly before through the final kilometres with a handful of its riders before the 26-year-old Dane punched clear on the flat run into the line in Lyon to take his first Tour de France victory. 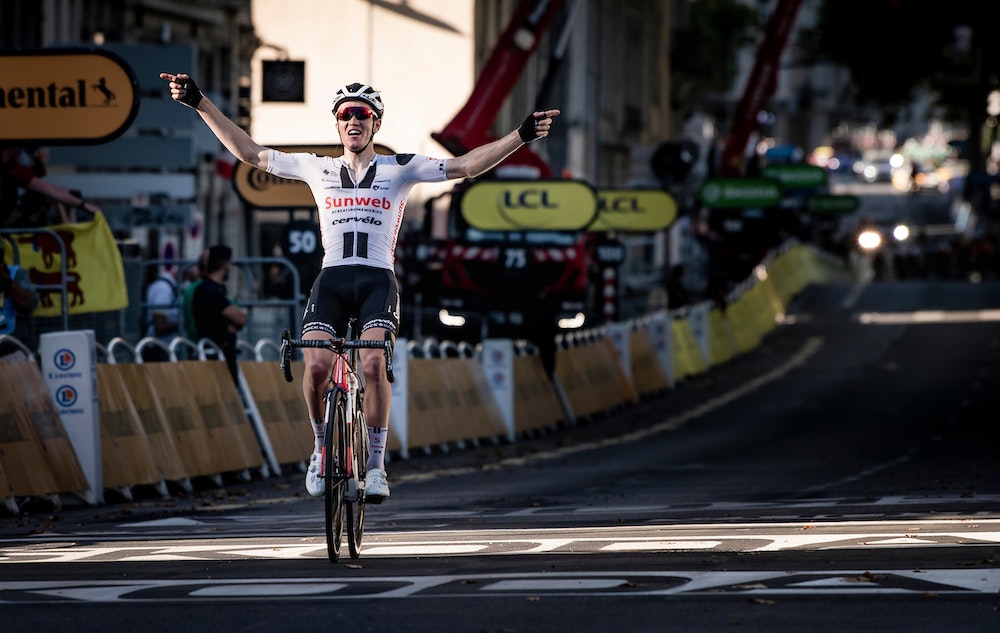 Primož Roglič (Jumbo-Visma) finished safely in the bunch behind to retain his GC lead.

“I have no words,” Kragh Andersen after the stage. “I’ve dreamed about this but it’s always hard to say ‘I’m good enough’ before you’ve done it. I’m amazed and full of emotions.”

“I had really good legs the whole day,” he continued. “Of course you never know how good the other guys are … It took a long time during the Tour to get confidence in myself. But I knew that if I suffer, they all suffer … and then I just went for it.”

Kragh Andersen had launched his move inside the final three kilometres through the busy streets of Lyon as his Sunweb teammates stifled the chase behind. He soon forged a sizeable gap, finishing 15 seconds ahead of the chase group, with Luka Mezgec (Mitchelton-Scott) and Simone Consonni (Cofidis) taking second and third respectively.

Bora-Hansgrohe had controlled the majority of the race, driving a fierce pace to distance Peter Sagan‘s green jersey rivals and to set up the Slovak star for the tricky sprint finish. However, their efforts went unrewarded, with Sagan finishing fourth.

Kragh Andersen’s win comes just two days after his teammate Marc Hirschi won in Sarran on stage 12. Sunweb came into the Tour as underdogs hunting stages but has animated the race day after day with breakaway efforts and podium finishes.

“It gives the whole group motivation and we believe in ourselves,” Kragh Andersen said of Hirschi’s victory. “When you see this young guy doing these amazing things I also get inspired and I believe a little bit more in myself.

How the Stage Unfolded 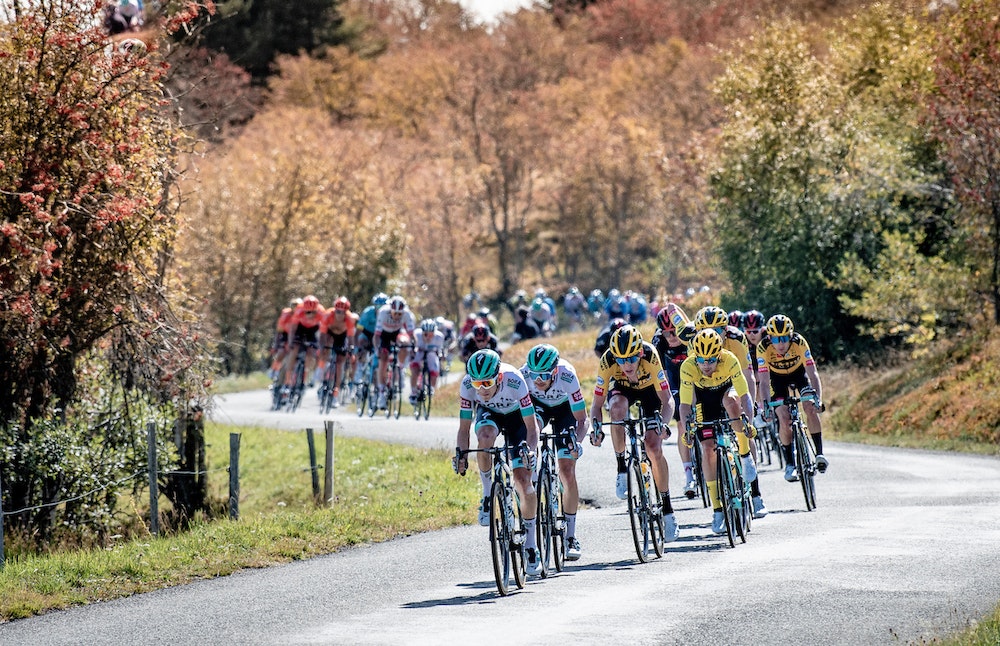 The German squad drilled the pace over the long climb of the Col du Béal early in the race to distance all the pure sprinters, most notably Sagan’s green jersey rival Sam Bennett (Deceuninck-Quick-Step).

Deceuninck-Quick-Step rallied around Bennett as he was distanced and looked to pace him back to the lead group. However, with CCC-Team joining Bora-Hansgrohe’s in piling on the pressure at the front, Deceuninck-Quick-Step called it quits with 80 kilometres to go and drifted back into the gruppetto with their sprinter.

The race stayed calm through to the final 20 kilometres, at which point the now-reduced peloton entered the cluttered suburbs of Lyon, with road furniture and high curbs littering the streets. Looking to keep their leaders safe, Jumbo-Visma and then Ineos Grenadiers led the bunch into the first of the two short final climbs of the day.

Sunweb set the attacks rolling with Tiesj Benoot accelerating clear on the lower slopes of the Cote de la Duchere on 10 kilometres to go, with Kragh Andersen and Valentin Madouas (Groupama-FDJ) following.

Benoot held a slim advantage over the summit of the short hill before being caught by the bunch at the bottom of the descent as Bora-Hansgrohe and Jumbo-Visma led the chase.

With Sagan safe in the bunch, Bora-Hansgrohe launched Lennard Kämna on the attack on the Cote de la Croix-Rousse, with Thomas de Gendt (Lotto-Soudal) and Julian Alaphilippe (Deceuninck-Quick-Step) chasing him down.

The action all came back together in the flat final four kilometres. Hirschi punched clear to be chased down by Sagan as Sunweb played its next card.

The front group sat up momentarily, waiting for the next attack, before Kragh Andersen made his winning move up the right-hand side, leaving his Sunweb teammates to disrupt the chase behind as he rode to his first Tour de France stage win.

The GC riders all finished together in the group behind the Dane with no time differences as the yellow jersey contenders looked to cool their jets before the tough summit finish atop the Grand Colombier on Sunday.