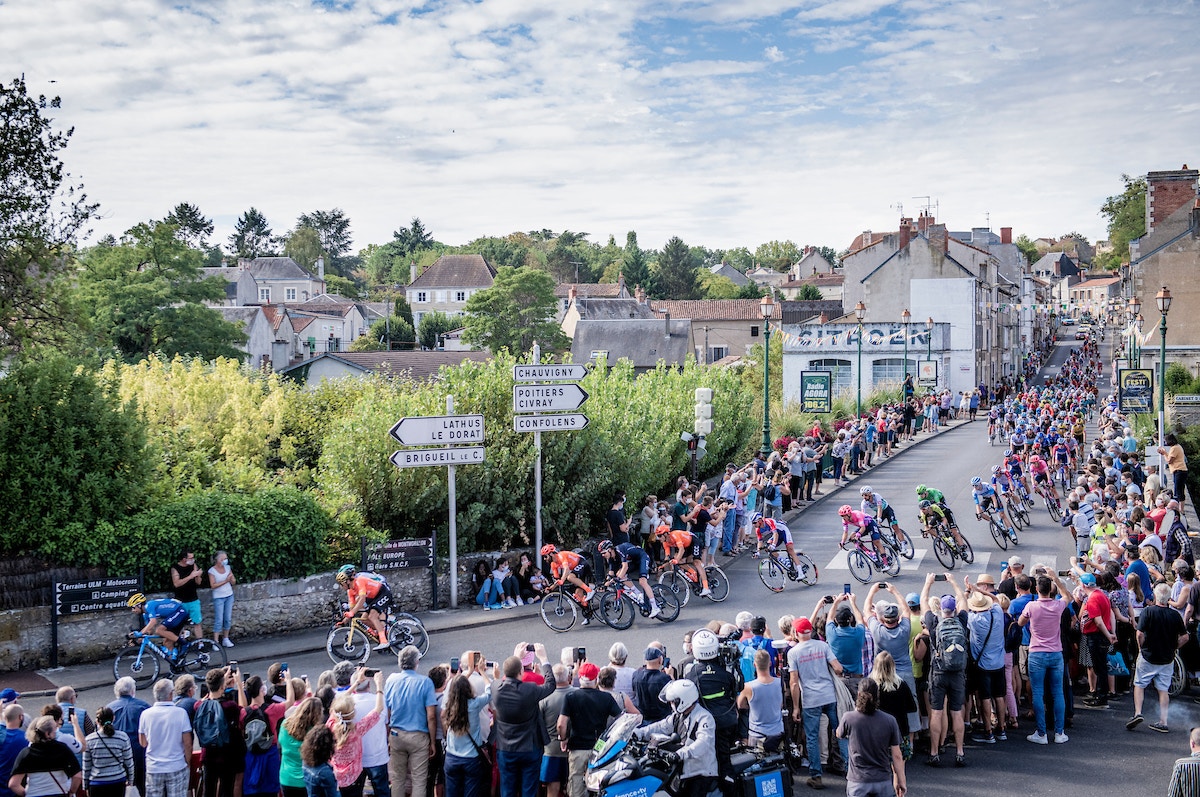 Marc Hirschi (Team Sunweb) took a solo win on stage 12 of the 2020 Tour de France — the longest stage of this year’s Tour — launching a 28-kilometre attack on the penultimate climb and distancing himself on a technical descent.

“It’s unbelievable. I was two times really close, and today I never believed that I could make it. I was really doubtful. I went full-gas the last 200 meters and it is just so super nice. I can’t describe it. It’s hard to find words,” said the 22-year-old winner riding in his first Tour. “I was always doubting. They were close and I had a picture in my mind from the last two stages. The last 3k was the last time I believed it. It’s my first pro victory and it’s at the Tour. It’s like a dream. It’s incredible.” 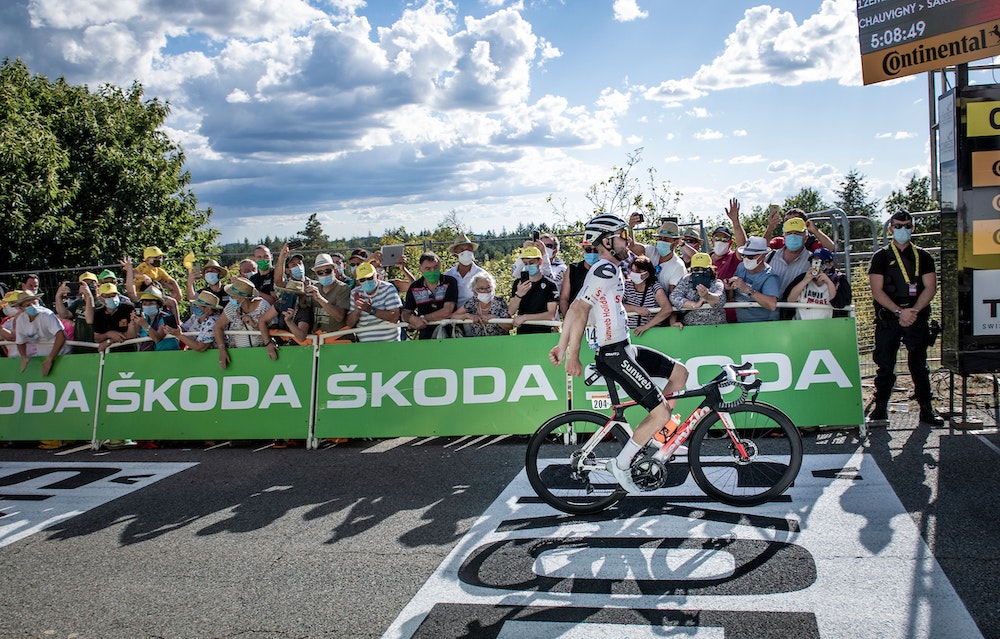 The former under-23 world champion from Switzerland used his supreme descending and time-trialling skills to stay away from repeated attacks from Marc Soler (Movistar) and Julian Alaphilippe (Deceuninck-Quick-Step).

Hirschi nearly won stage 2 of this year’s tour but was overtaken by Alaphilippe in the final few meters of the stage.

He was again so close to a victory the following week but was beaten to the line by the Slovenian pair of Tadej Pogačar (UAE Team Emirates) and Primož Roglič (Jumbo-Visma) in the final kilometres of stage 9.

Hirschi added, “It’s my first pro victory. I will never believe that I could win a stage here so just to start here was like a dream. Now I’m here and I have a victory and two podiums, so it’s like a dream.” 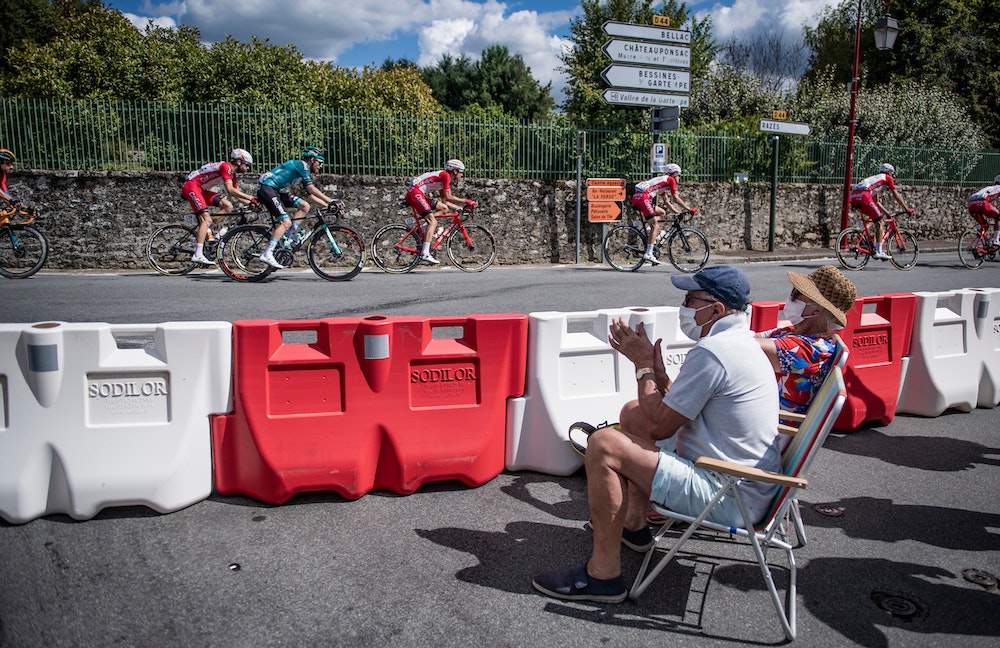 For nearly the first 160km of the 218km of the stage, Bora-Hansgrohe exerted control on the stage, driving a fast pace in an effort to shed Sam Bennett (Deceuninck-Quick-Step) and set up Peter Sagan to take a few green-jersey points.

A six-man break which included Luis León Sánchez (Astana), Imanol Erviti (Movistar), Nils Politt (Israeel Start-Up Nation), Max Walscheid (NTT Pro Cycling), Mathieu Burgaudeau (Total Direct Energie), and Kasper Asgreen (Deceuninck-QuickStep) was brought back by Bora-Hansgrohe, but this proved to be the start of the fireworks for the stage win.A

A group with Soren Kragh Anderson (Sunweb), Teisj Benoot (Sunweb), and Marc Soler (Movistar) were finally able to slip off the front after several attempts.

Max Schachmann (Bora-Hansgrohe) riding with a broken collarbone sustained before the start of the tour, Hirschi, and Bob Jungles (Deceuninck-Quick-Step) bridged up from the yellow jersey group, and for a brief few kilometres, a group of six were away.

Just before the penultimate climb, the peloton raced through the home town of Frenchman Raymond Poulidor, who finished on the Tour overall podium eight times during his career. Poulidor was an inspiration for two of his grandsons, David and Mathieu van der Poel, both of whom now race for Alpecin Fenix.

But attacking on the penultimate climb, Hirschi got a gap of 20 seconds, which expanded into 48 seconds by the top of the climb.

This proved to be the decisive move for the young Swiss.

In the yellow jersey group, Peter Sagan briefly dropped off the back, where he struggled until the top of this climb, but ultimately rejoined this group.

Descending from this climb through technical and partially-shaded roads, Hirschi continued to pad his lead, several times appearing to skid through turns, but maintaining enough control to stay upright. 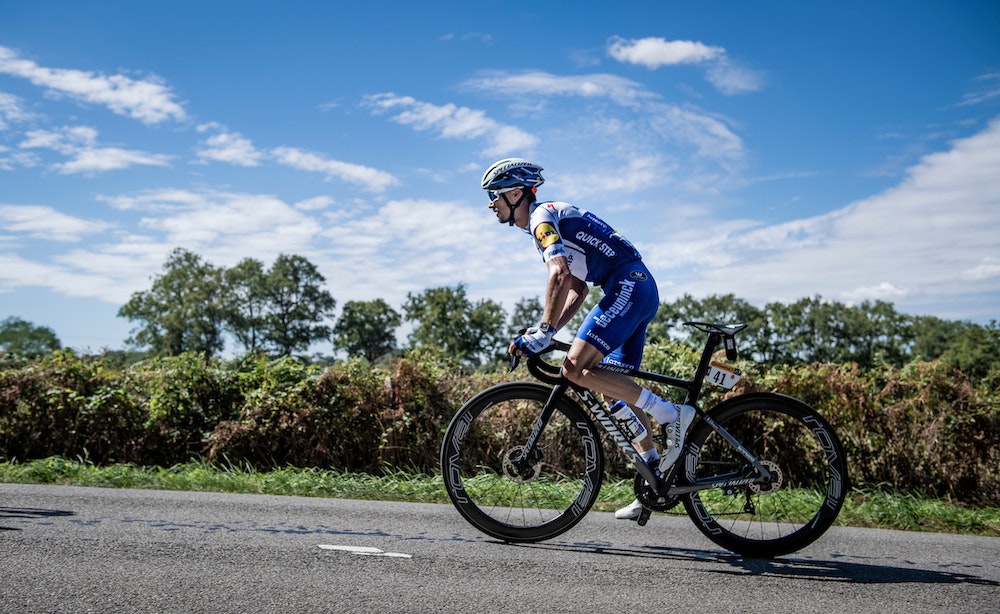 Not satisfied with the chase, Alaphilippe launched attack after attack, getting to within 19 seconds of the stage winner, but ultimately appeared to suffer a mechanical in the final 3km, and he was not able to lead the chase from the yellow jersey bunch to the group chasing Hirschi.

The Frenchman who previously lead the GC in the first week settled back to lead the large chase group that included the yellow, green, and white jerseys, ultimately finishing in 11th place.

Pierre Rolland (B&B Hotels) managed to hold a 10-second advantage on this group through the finish and finished 42 seconds back of the stage winner.

Primož Roglič, wearing the leader’s yellow jersey, told reporters, “I think it’s a hard stage in front of us, it’s a nice challenge, for sure we can expect some fight in the end, for us, everything stays the same, focusing on ourselves and do our job, in the end, a lot of things can happen.”

Roglič continued, “Today we expected the break to go away earlier and it would be easier, it was good racing for the whole day, at the end on the climbs, our guys were strong and it was controlled, happy to be staying in yellow, happy with the team.” 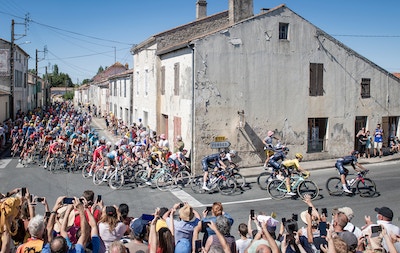