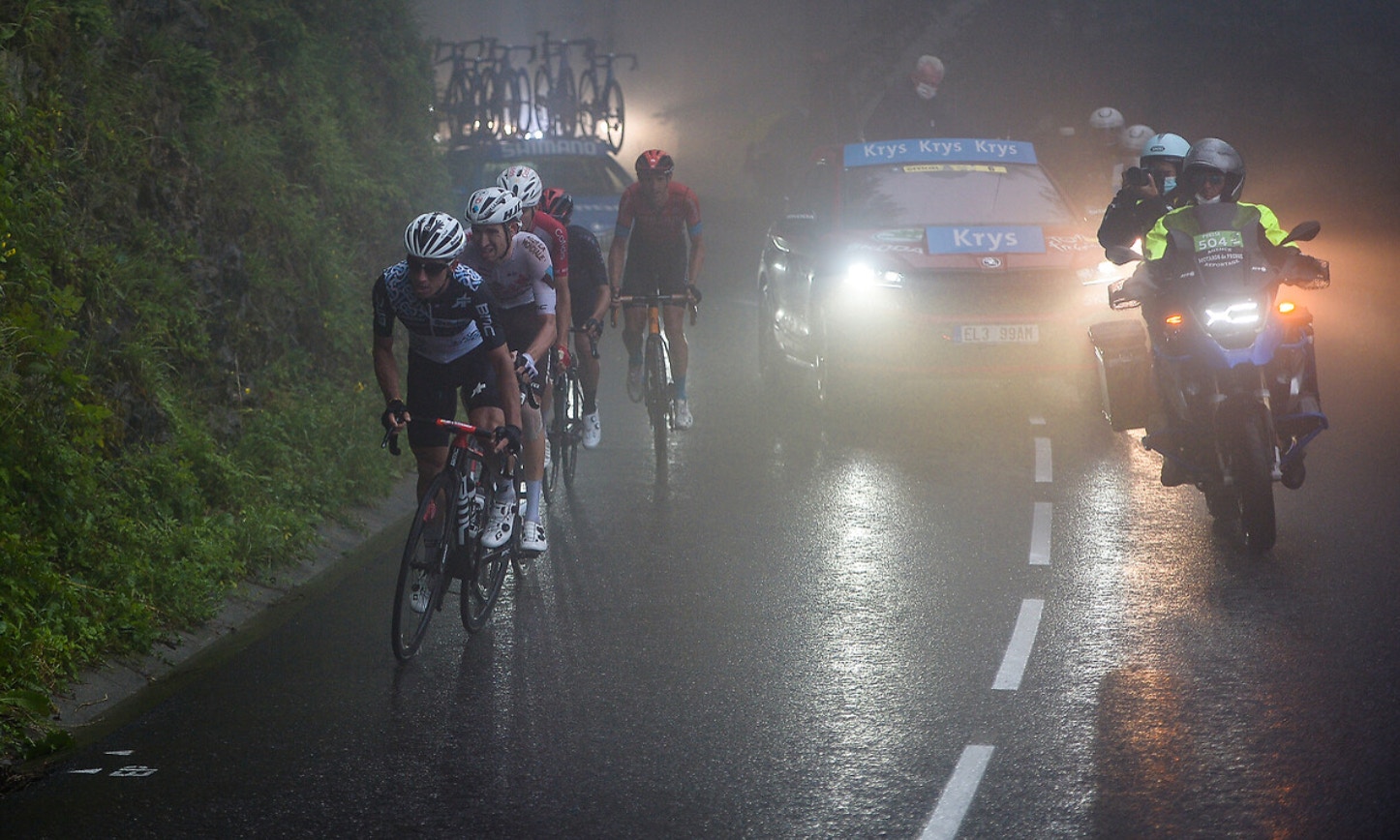 Tadej Pogačar (UAE Emirates) stomped on his opposition in the Alps on Saturday.

The defending Tour de France champion accelerated twice to drop all the GC favourites and then shake Richard Carapaz (Ineos Grenadiers) from his wheel on 30km to go. Pogačar went on to mop up the scattered remnants of the peloton and catch all the breakaway riders bar Dylan Teuns (Bahrain Victorious), who scored a sizzling stage win.

Teuns had countered an attack from the breakaway by Michael Woods (Israel Start Up Nation) before catching the Canadian and holding off a chase by Woods, Pogačar and Ion Izagirre (Astana-Premier Tech) to land his second Tour stage victory.

“It’s super amazing. I had a difficult year this year, aiming for goals but never came close. Finally, now I can celebrate,” Teuns said.

“This was an honour to my grandad who died just before the Tour. That’s why I pointed to the sky,” he continued tears in his eyes. “We had the funeral a few days before the Tour so it was quite emotional this last 10km.” 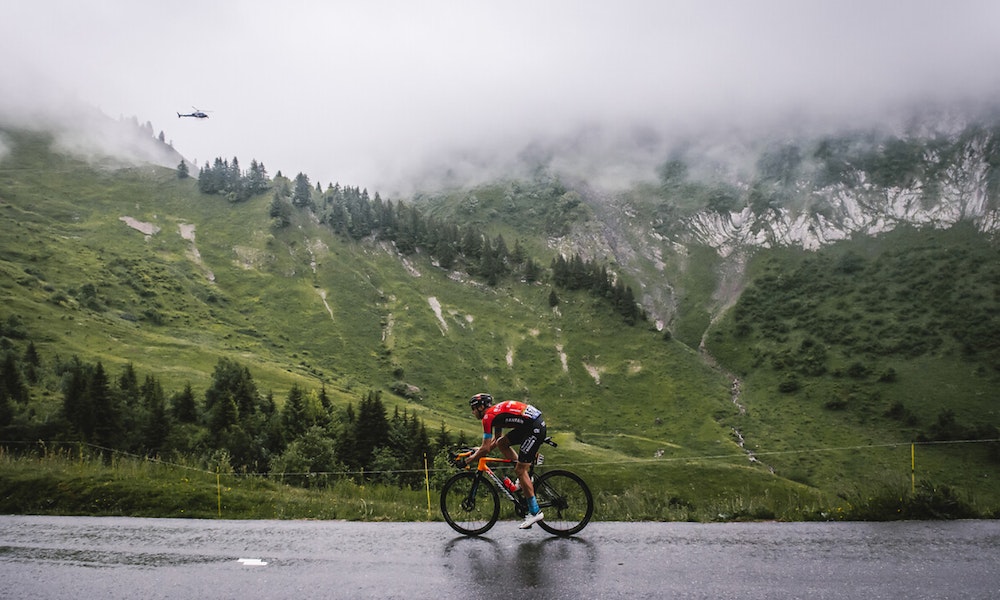 Izagirre finished second on the stage with Woods third. Pogačar finished in fourth and takes a 1:48 GC lead into Sunday’s second stage of this Alpine weekender.

Mathieu van der Poel hung tough through to the penultimate climb of the multi-mountain test before losing the wheels and relinquishing his yellow jersey. Geraint Thomas and Primož Roglic also lost their hopes at a GC bid. Both of the injured former-favorites were dropped early in the stage and lost bucketloads of time.

Pogačar had attacked out of the GC group at 30km to go to leave closest rival Richard Carapaz for dead.

The defending champ ploughed through the remnants of the 20-strong breakaway of the stage, chewing into a gap of well over four minutes. Pogačar was able to catch all the break but never caught a flying Teuns on the descent into Le Grand-Bornand, instead opting to descend the rain-soaked roads in safety rather than push for his second stage win of the race.

Geraint Thomas was one of the first casualties of a red-hot start to the race. The Welshman lost contact in the opening kilometres of the uphill start and joined the grupetto with a number of sprinters and UAE Emirates riders.

Primož Roglič was next to go, losing ground on an uncategorized bump after 30km of racing. After losing handfuls of time Friday, Roglič crumbled back to the last group on the road to join his former GC rival Thomas, 10 minutes back off the pace. After starting the race as top contenders for yellow, Thomas and Roglič’s Tours are definitively done. 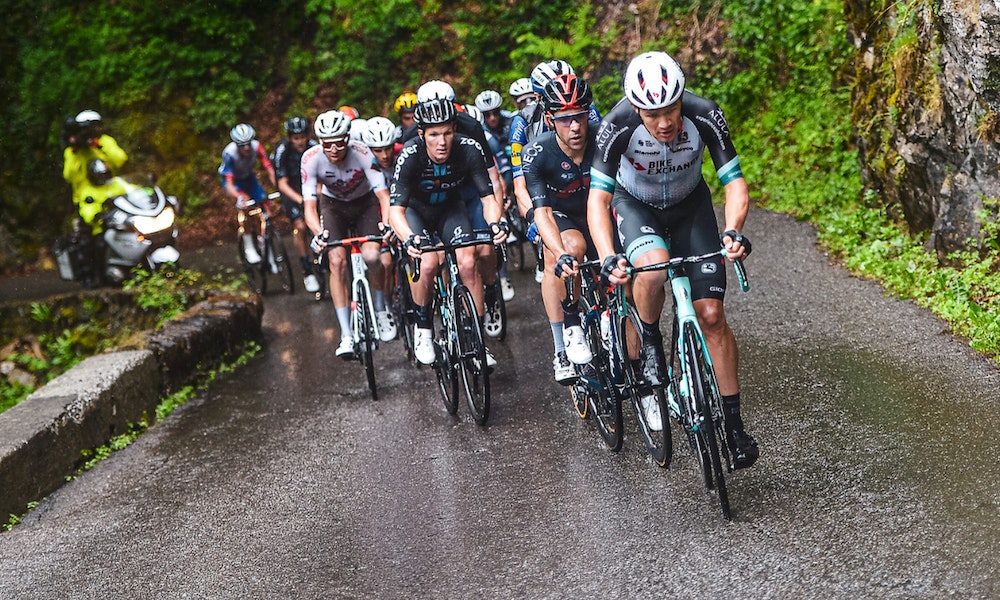 After some 40km of frantic attacks, counter-attacks and splits in the bunch, Wout Poels hit out off the front on the Copponex climb. The Dutchman rode alone out front for around 10km before a large group including Sepp Kuss, Dylan Teuns, Michael Woods, Simon Yates, Jonathan Castroviejo and Nairo Quintana bridged across to form a 20-strong lead group.

The peloton of favourites only settled after around 80km of frenetic racing in which Wout van Aert was repeatedly on the offense.

Despite being low on numbers after losing two riders early in the stage, UAE Emirates was forced to chase as Ineos sat on with the excuse of having a teammate in the escape. After the team’s weakness on Friday’s stage, Davide Formolo put the hammer down on the Romme for UAE Emirates to set up Pogačar for the rocketship attack that dropped Carapaz and caught all of the break.

Woods and Teuns hit out

Soren Kragh Andersen had hit out from the break at around 40km to go as he hunted after the GC lead.

Woods chased him down and motored past the Dane before flying straight past him to cross the summit of the Romme climb solo. Teuns managed to bridge across to Woods on the top of the Colombiere climb before dropping the ISN captain and descending toward the finish line alone.

The Belgian looked at risk of being caught by the flying Pogačar, but the Slovenian eased off the gas slightly on the long wet descent to leave Teuns to win another memorable stage of this year’s Tour. 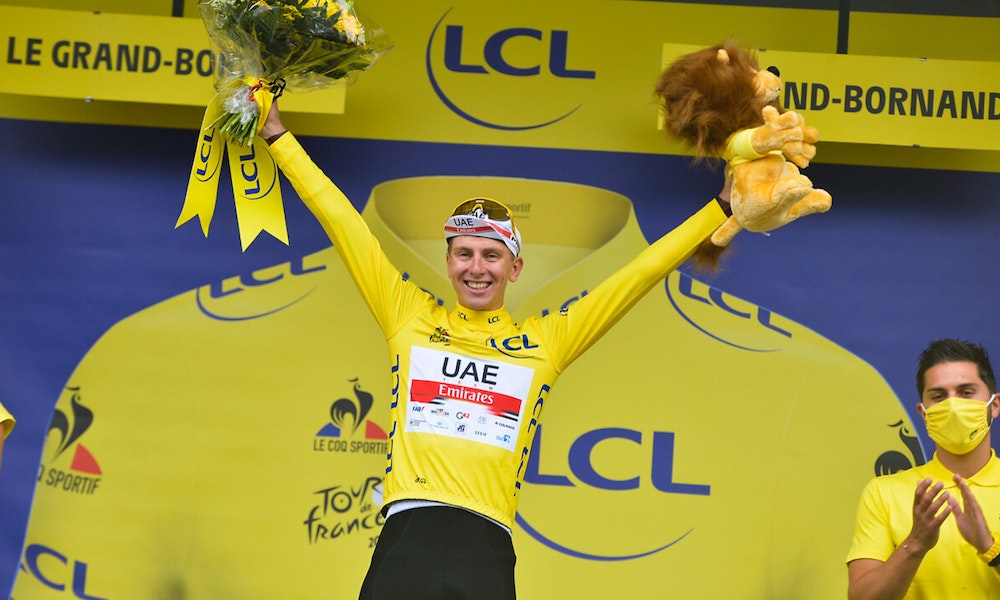 Mathieu van der Poel and Wout van Aert survived through to the penultimate climb of the day, lasting through many more mountains than many would have assumed.

However the elastic finally snapped on the 10 percent pitches of the Romme and the two classics hitters out of the bunch as the yellow jersey slid off his broad shoulders. Van Aert continued to push as he looked to hold onto his GC position. However, with Pogačar flying, van Aert now sits 1:48 down, second overall.