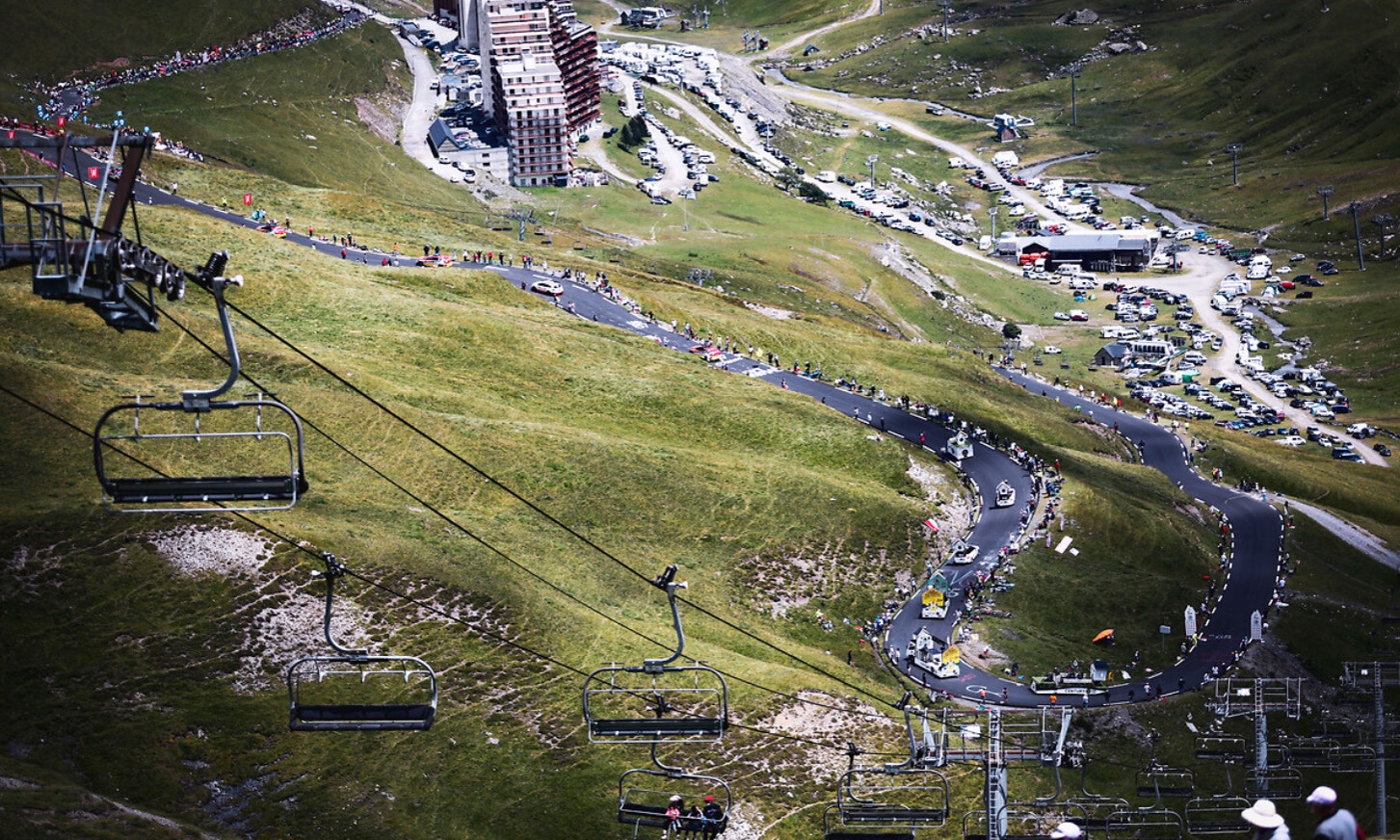 Tadej Pogačar won stage 18 of the 2021 Tour de France, summiting the hors categorie climb to Luz Ardiden first, on an explosive attack that his rivals could not match.

Launching a blistering attack at 700m to go, the yellow jersey quickly distanced himself from Jonas Vingegaard (Jumbo-Visma) and Richard Carapaz (Ineos Grenadiers).

“It’s unbelievable, yeah. After yesterday today, I don’t know, but I felt good, and I’m really happy with the win,” Pogačar said. “Yeah, of course, it’s a game for me since I started. I’m enjoying playing it.” 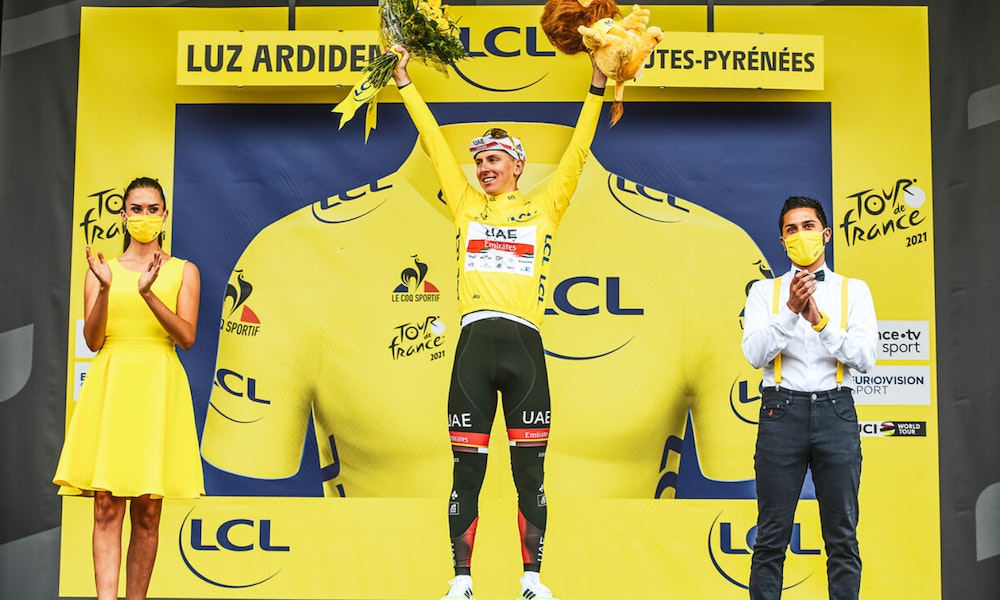 With a handful of bonus seconds and GC placing on the line, Vingegaard swiftly responded to the yellow jersey’s move, jumping ahead of Carapaz to grab the precious time bonus. With the second place on the stage, the Jumbo-Visma rider extended his lead to six seconds over Carapaz.

“Today was a really, really hard stage; obviously, I am really, really happy with how it went, Pogačar won, but I am second on the stage. But I am super, super happy I keep my second place; it is unbelievable,” Vingegaard said. “I could follow Carapaz, I didn’t have my best day, and I was doubting a bit on myself, but I could follow in the end, and this is amazing.”

From the 144 starters of stage 18 in Pau, several attempts to forge a breakaway in the first 100km on rolling terrain were made, but nothing stuck. 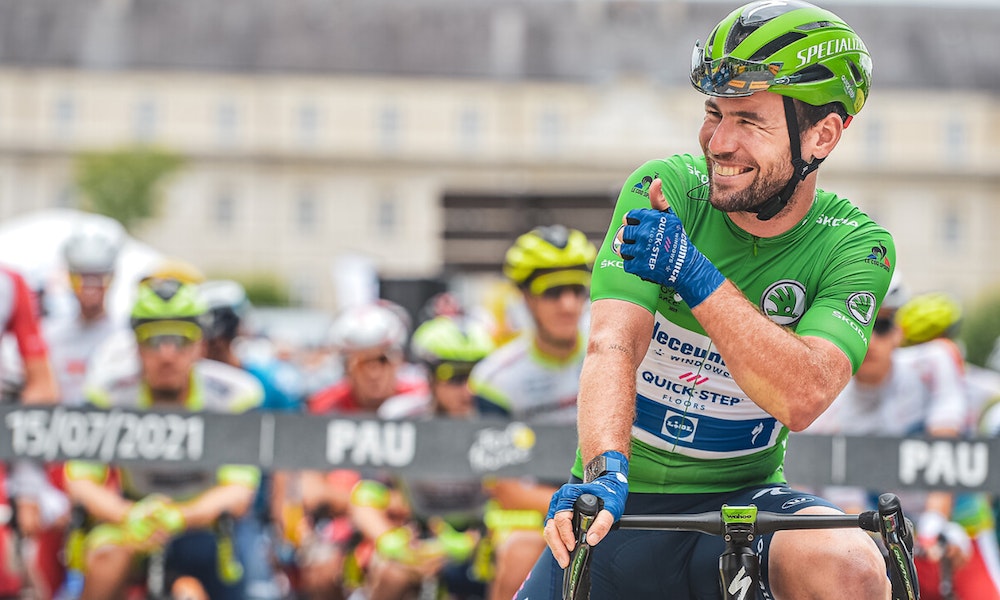 Juul Jenson gave up the breakaway and drifted back to the peloton to help escort teammate Michael Matthews at the coming intermediate sprint point.

At the intermediate sprint with some 66km of racing remaining, Deceuninck-Quick-Step lined up for Mark Cavendish in the green jersey to take additional sprinting points.

Micahel Mørkøv (Deceuninck-Quick-Step) lead out Cavendish, and he was able to stay ahead of a fading Matthews, while Sonny Colbrelli (Bahrain-Victorious) was surprised and did not react in time to go with the others. 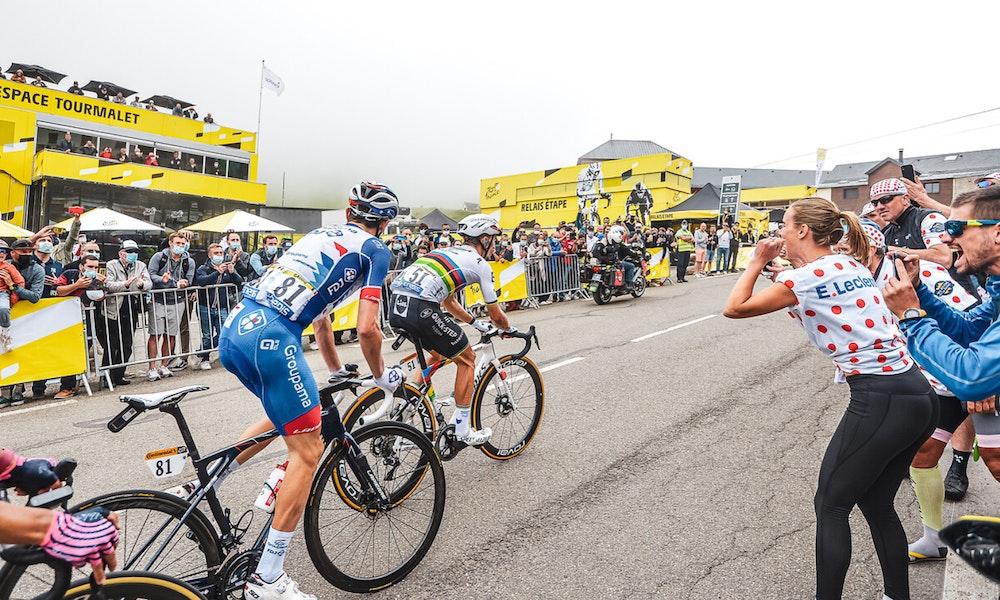 At the base of the Col du Tourmalet, the break had only 45 seconds as the yellow jersey, and his UAE-Team Emirates teammates came to the front to seize control of the race.

Onto the climb, Mohorič (UAE-Team Emirates) wearing the Slovenian national champion’s jersey, and Alaphilippe in the world champion's jersey dropped Bennett and Périchon.

UAE-Team Emirates lead the peloton up the fearsome hors categorie climb, while behind Tim Declercq lead the four-man Deceuninck-Quick-Step brigade caring for the green jersey leader.

Between Alaphilippe and Périchon were four riders: Pierre Latour (Team TotalEnergies), Kenny Elissonde (Trek-Segafredo), Pierre Rolland (B&B Hotels), and Valentin Madouas (Groupama-FDJ). This foursome was 45 seconds back of the lead two, and half a minute up from the peloton.

Richie Porte (Ineos Grenadiers), third overall at the 2020 Tour, found the pace on the Tourmalet too challenging and dropped from the group at the front of the peloton.

Alaphilippe and Périchon were joined by Ruben Guerreiro (EF Education-Nippo), Latour, Elissonde, David Gaudu, Valentin Madouas (Groupama-FDJ), Omar Fraile and Ion Izaguirre (Astana – Premier Tech), but just 500m up the road, Mohorič dropped from the front along with Latour, while Alaphilippe tapped out a tough rhythm some 40 seconds ahead of the Ineos Grenadiers led the chase.

After a good amount of work in the break, Alaphilippe finally cracked 3km from the summit of the Tourmalet, leaving Gaudu, Latour, and Guerrero on the front of the race.

Latour was the first rider over the Tourmalet summit taking a special $5,000 bonus.

Michael Woods attacked and brought along Wout Poels (Bahrain Victorious) from the front of the peloton at 1km from the summit as the two battled for the remaining KOM points.

Rigoberto Urán, guided by his EF Education-Nippo teammates, suffered over the first two HC-rated climbs and watched the race go up the road without him.

Gaudu rocketed away from Latour on the first part of the descent into a headwind, while Alaphilippe — who had been distanced on the ascent of the Tourmalet — was able to ride back onto the front of the chasers. 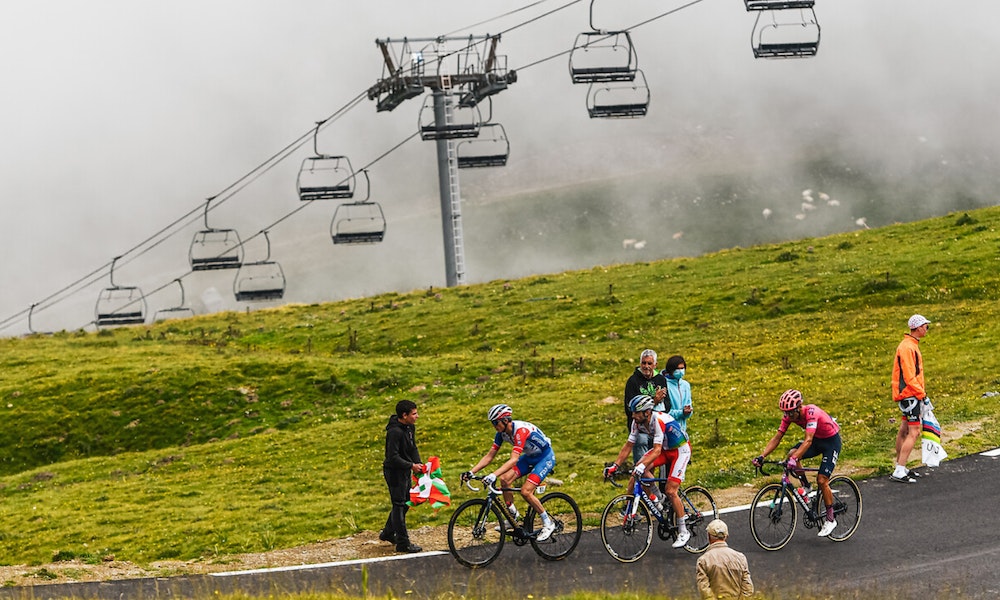 Gaudu plunged solo into the valley below while the chasing groups came together behind him with the yellow jersey.

Urán, still struggling, was in a group of 13 some 90 seconds behind the yellow jersey group. The Colombian slipped into 6th on the virtual GC before the final climb to Luz Ardiden.

Onto the base of the final climb, Gaudu had only 15 seconds on the maillot jaune bunch.

Poels, in the white and red-spotted KOM jersey, was dropped on the final climb with 10km to go as Gaudu was caught by the peloton still being lead by Ineos Grenadiers. His lead in the polka dots competition was under threat from the Slovenian race leader.

In fourth overall, Ben O’Connor (AG2R-Citroën), as Urán had been distanced, was tucked in with 16 others at the front that included all of the top GC favourites.

Ineos Grenadiers were still on the front, with Tao Geoghegan Hart doing most of the work. He lead Jonathan Castoviejo, who brought along Carapaz, who was just ahead of the yellow jersey bunch, as Poels made his way back to the rear of this group.

The tempo tapped out by the Ineos Grenadiers was too much for Alexey Lutsenko (Astana-Premier Tech) and van Aert, and the two dropped off the leading group. Rafal Majka went to the front of the race to up the pace and set up his team captain in the yellow jersey. 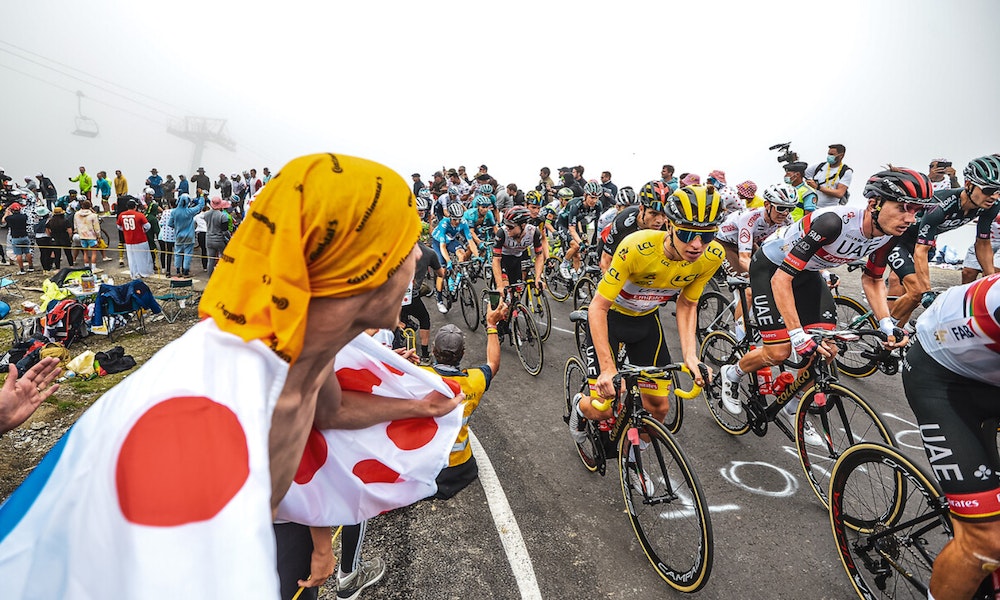 Vingegaard put himself on Carapaz’s wheel and shadowed him into the banner at 3km to go.

Pogačar attacked, and this put Kuss and Vingegaard in trouble for a moment. Still, when Enric Mas (Movistar) and Carapaz responded to the move, the American and his white-jersey clad teammate responded and came back together with the leader of the Tour de France.

With just 2km to go, Kuss, Vingagaard, Pogacar, Mas, and Carapaz distanced themselves from the rest of the field.

Dan Martin (Israel Start-Up Nation) — who had been active some of the stage to get KOM points — attacked from the chase, 18 seconds back from the lead five.

Kuss buried himself into the final kilometre to wear down the yellow jersey but could not shake Pogačar.

Mas went on the offensive as Kuss dropped away with less than 800m remaining on the stage, but the yellow jersey countered and took control of the race with Carapaz and Vingegaard chasing.

At 700m Pogačar went all-in on a massive surge. Vingegaard and Carapaz distanced Mas, and this is how the stage podium sorted out.

Just behind, a hard-chasing Woods and Kuss went after Mas.

“I am happy after all the work did for the team, I would have liked to try to win the stage, but I wasn’t quite there in the end, but I am happy that we are nearing the podium in Paris,” Carapaz said. “The stage was very hard, it was fast, and as a team, we wanted to try to win the stage. We were in the fight; we gave it 100 per cent, but there were people stronger than us today, but I didn’t lose any time. I cannot be disappointed about that.”

Stage 19, 207km from Mourenx to Libourne, is a day for the sprinters if breakaways can be policed. The final 30km of racing is over undulating roads and does not flatten out until about 8km to go.

This stage is one of two opportunities for Mark Cavendish to write himself as a cycling legend and take a 35th career Tour de France stage win.