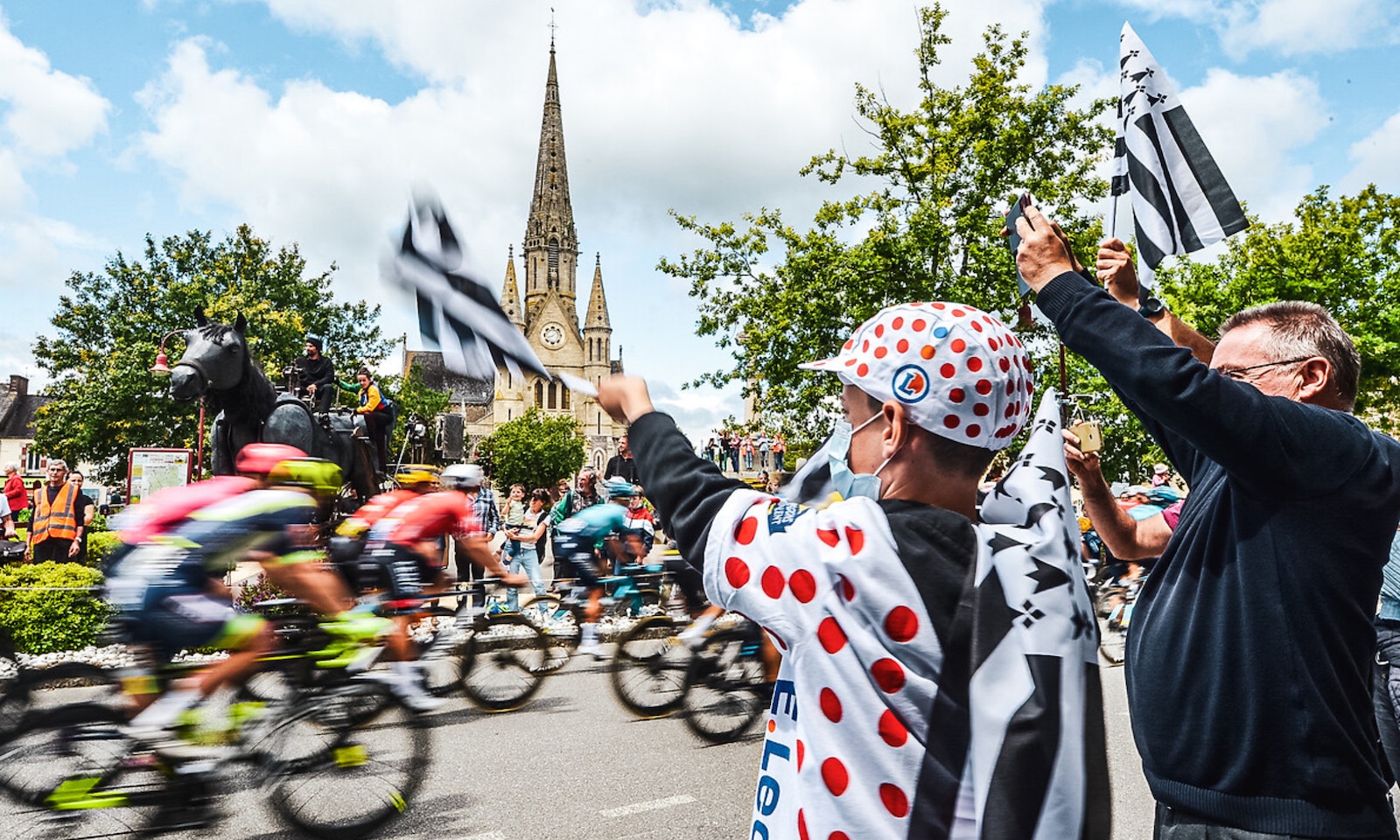 The “Manxman” took his 31st stage win, coming around the Alpecin-Fenix leadout, and catching the last man from an all-day break with just a handful of meters to spare. 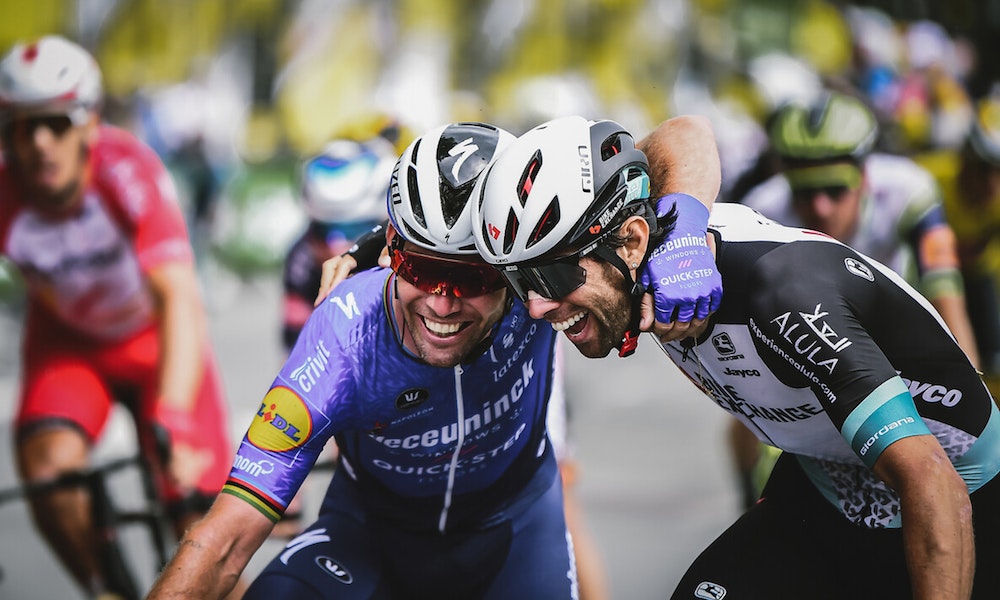 With the stage win and also the points earned at the day’s intermediate sprint, Cavendish assumed the lead of the points competition from teammate and world champion Julian Alaphilippe.

“I have to be realistic. I will try to do everything I can to keep the yellow jersey tomorrow, but [the time trial] is a race for specialists, so I do not expect I will be able to keep it,” said van der Poel. “It has already been an amazing Tour for us, and we will try to get another stage win during this Tour later in the race.”

After a brief rider protest at the start of the stage, a two-man break established itself and got as much as three minutes before the sprinters’ teams went to the front to maintain a manageable gap for the stage finale.

The break of Brent Van Moer (Lotto-Soudal) and Pierre-Luc Périchon (Cofidis) had as much as three minutes’ gap at 125km after the racing resumed.

Pierre-Luc Périchon (Cofidis) and Brent van Moer (Lotto-Soudal) were off the front of the peloton for the majority of the stage. Photo: Chris Graythen/Getty Images The pace was brought up at 100km to go, and riders were single-file on the front. This effort halved the advantage of the two men in just 40km.

Cavendish went to the team car when his saddle slipped at 55km to go, and the stage-winner took a spare bike — with a saddle — without a race number.

At the intermediate sprint Michael Mørkøv (Deceuninck-Quick-Step) lead out Cavendish to take the remaining sprint points available ahead of Nacer Bouhani (Bahrain-Victorius).

Cav immediately returned to the bunch, as they continued in pursuit of the two men who were still 90 seconds off the front.

A win from the break? 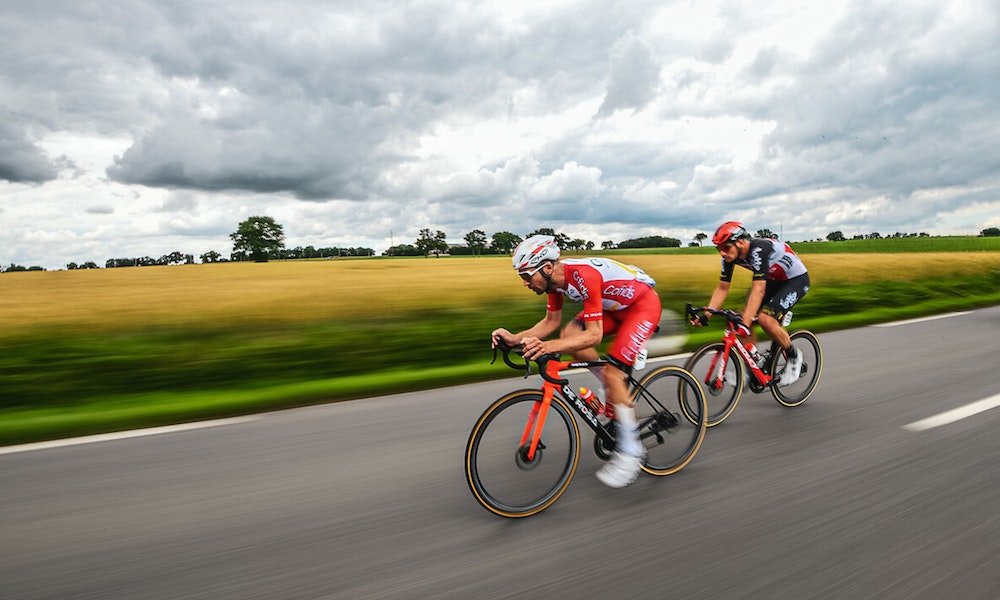 With 15km to go, Ineos Grenadiers went to the front to keep Richard Carapaz and Geraint Thomas out of harm’s way.

Alongside the British squad was Deceuninck-Quick-Step who was also on the front to help bring back the break, and also to put either Alaphilippe or Cavendish in an advantageous position for the sprint.

Van Moer went solo at 12km, distancing himself from Périchon on a small rise. This tactic worked for him at the recent Critérium du Dauphiné when he took the leader’s jersey on stage 1.

Just one minute behind van Moer with 10km to go, Alpecin-Fenix massed at the front of the chase led by the yellow jersey of van der Poel. The squad appeared to be sitting up for a replay of the previous stage and stay out of danger.

Lotto-Soudal — without Caleb Ewan who withdrew after crashing on stage 3 and suffering a broken collarbone — reacted by going to the front to disrupt the chase and give van Moer the best chance to win.

Trek-Segafredo and Team DSM then went to the front, ahead of Lotto-Soudal to try to bring van Moer back.

While van Moer’s pedaling looked ragged in the final 3km, he was able to hold the chasers by just the slimmest margin into the final half-kilometre.

Patience and timing a sprint

Alaphilppe and the “Wolfpack” dropped Cavendish into position in the final 500m, where he was in the center of the road, and was able to get onto the wheels of the Alpecin-Fenix sprint train.

Philipsen had opened the final sprint, scooping up the fading van Moer just 100m from the line.

Cavendish waited and waited and then pounced, turning a massive gear at a relatively lower cadence to come around the fading Philpisen while holding Bouhani off as he crossed the line first for the 31st time at the Tour de France. 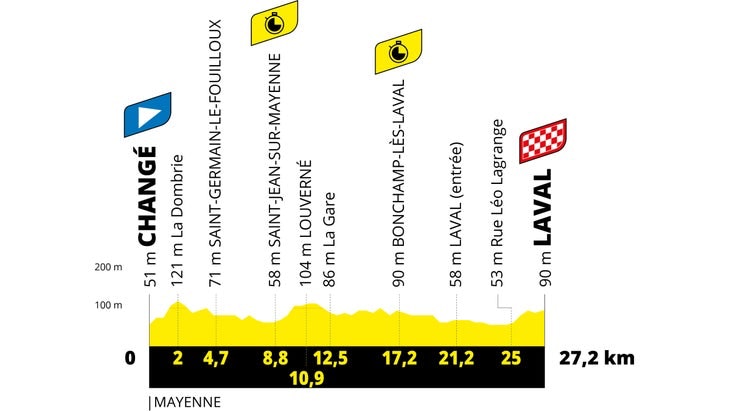 The stage 5 time trial is a 27.2km test that is anything but pan flat with 304m of elevation gain.

At 2km from the finish, riders will be forced to cope with a climb averaging 5.3 percent grade for just 300m. But this comes when they are suffering from the preceding 25km.

Time checks at 8.5km and 17km will offer benchmarks for performance along the way. 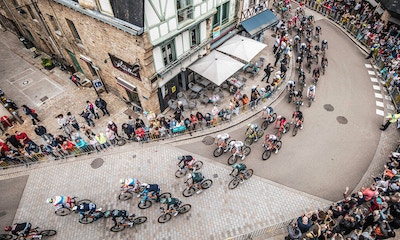 Crashes and high-profile abandonments were again the flavour of the day on a wet stage 3 of the Tour de France...