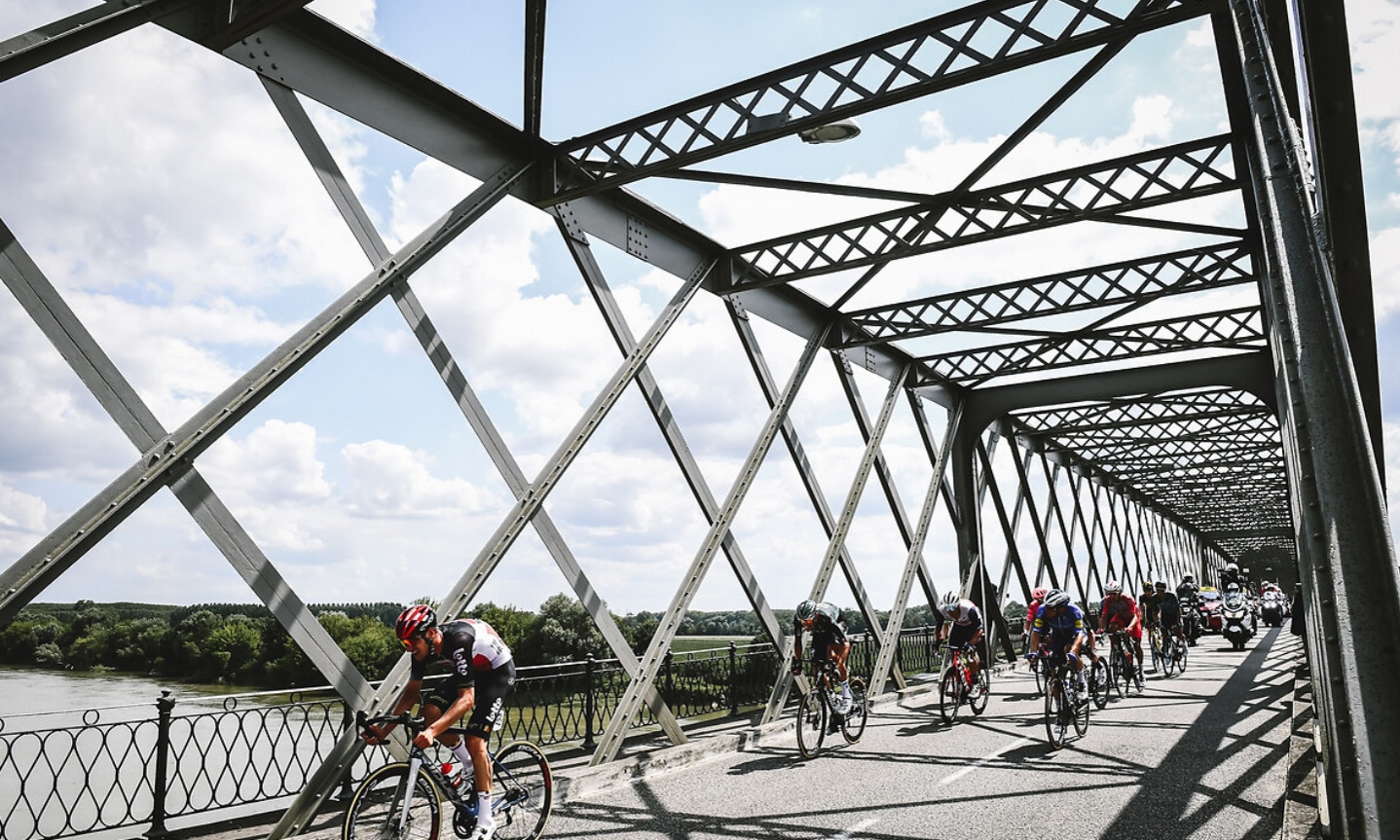 Matej Mohorič (Bahrain Victorious) in the national champion’s jersey of Slovenia soloed to the win on stage 19 of the 2021 Tour de France from a reduced breakaway group.

This is his second solo win of this edition of the Tour; he won stage 7 in a similar fashion.

“The start was rather nervous: when the breakaway went, I made a big effort to integrate [into] it. I tried to convince my escape companions to ride very hard for the first two hours. I was at the limit, but I refused to give up. I worked hard my whole career and dreamed of one day win a stage of the Tour,” Mohorič said. “I knew from experience that by working hard, I would get there. I’m proud to have managed to attack at the right time.” 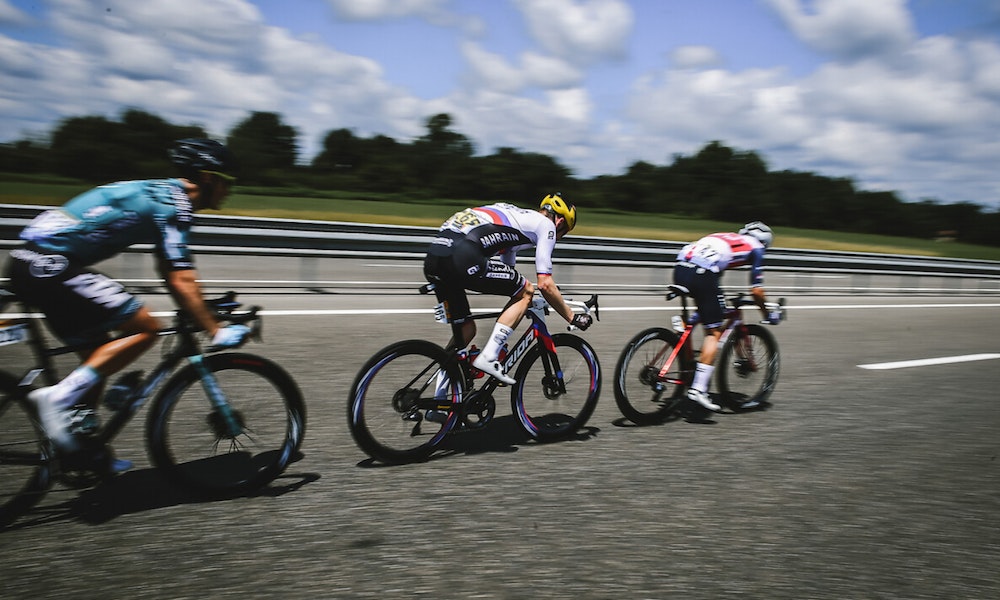 There was no change to any of the jersey classifications on the 207km, mostly flat stage from Mourenx to Libourne.

Two small crashes — the first at just 2km into the stage — temporarily gapped the Deceuninck-Quick-Step bunch with Mark Cavendish in it, but the race quickly re-formed. The second crash, at 168km, again split the main group and gapped Cavendish and Sonny Colbrelli (Bahrain-Victorious).

Mohorič was one of six riders to take advantage of the split at 205km to go.

Ineos Grenadiers, Israel Start-Up Nation, and Deceuninck-Quick-Step were on the front of the chase to try to keep control of the sizable break.

André Greipel (Israel Start-Up Nation), the sprinter known as the “Gorilla” was looking for a stage win on his birthday, but the gap to the break grew from 40 seconds to more than 60 seconds in just 15km.

With 85km to go, the gap was out to 1:43 and it continued to expand. The peloton decided to let the break get away when the gap went out to nearly 3:30.

By 50km to go, the gap was 10:33. Deceuninck-Quick-Step appeared to be saving its legs for the final stage Sunday.

From breakaway to solo 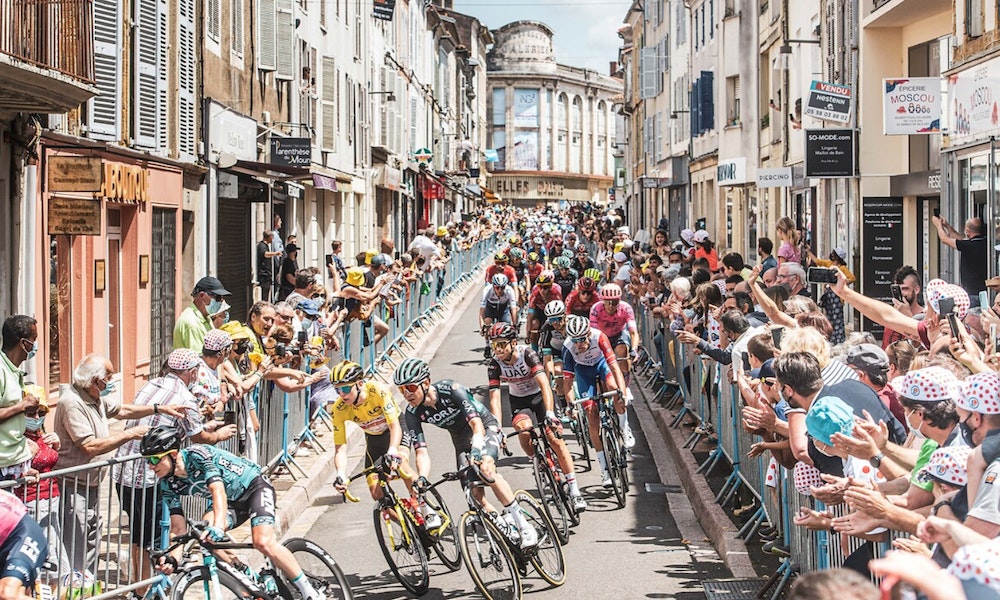 A split was established at 30km lead by Politt, with 10 mean moving away from the remains of the break, then 17.

Several kilometres later, Mohorič went solo off the front of this group at 24km to go.

The break stopped working together to bring Mohorič back, and scrambled after the solo rider, but did not work well together with fewer than 10km remaining.

The solo Slovenian had extended his lead to nearly a minute over the successive 5km.

Laporte and Valgren went to the front of the chase group but were not able to bring Mohorič back.

A minute behind Mohoric, Casper Pedersen finally shed the others at 3km to go. In the final 200m Pedersen was overhauled by Laporte for the remaining podium places.

Stage 20 is a 30.8km individual time trial from Libourne to Saint-Emilion.

The lumpy route winds through vineyards isn’t overly straight, and there are frequent changes of direction and a short hill soon after passing through the Château Petrus winery.

With more than five minutes separating the yellow jersey from second place, the real battle will be for the lower steps on the overall podium. This race against the clock will most likely determine second and third overall placings at the 2021 Tour.