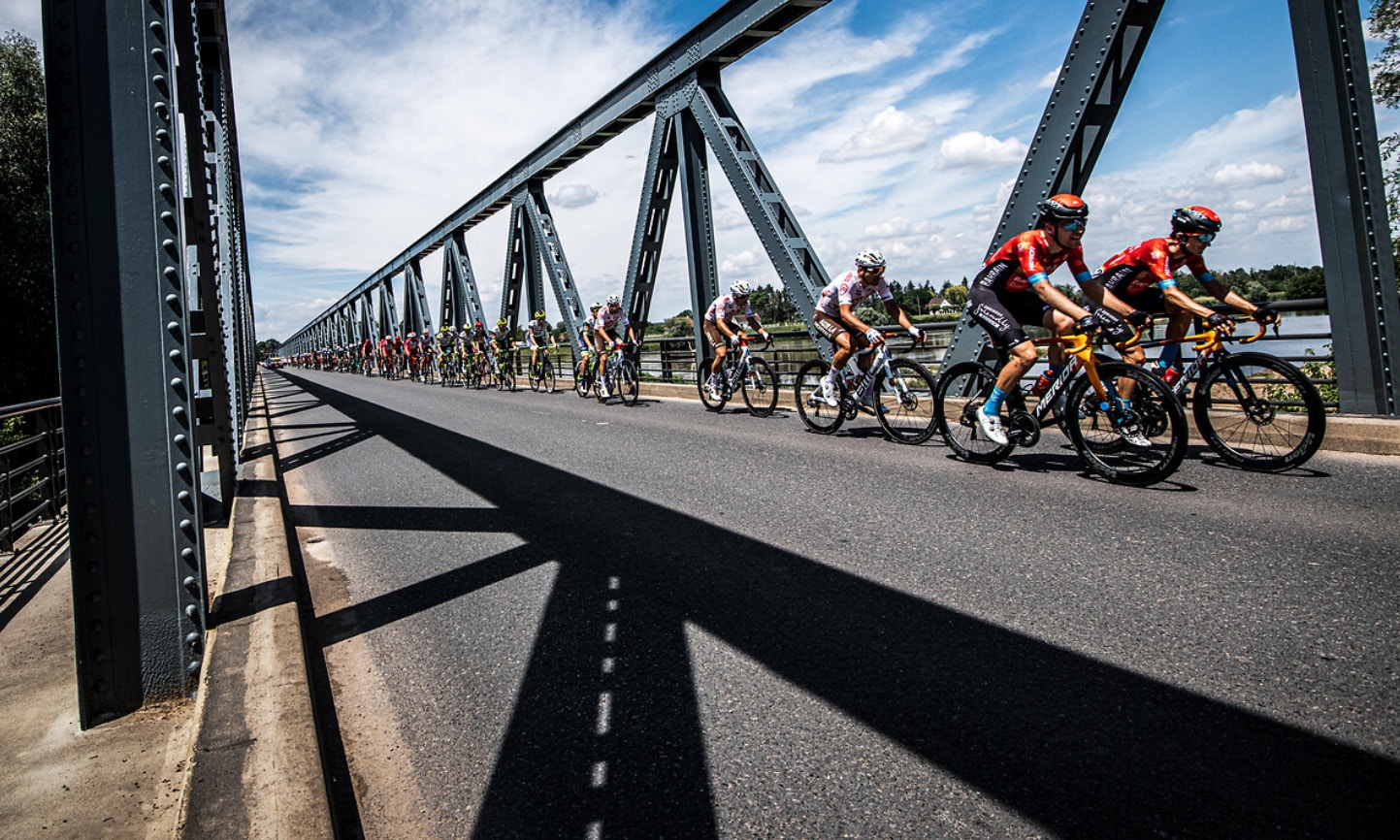 The road cycling champion of Slovenia also scooped up the lead of the climbing competition, the polka dot jersey, along the way to the finish.

Mohorič has now won stages in all three grand tours — and all were the longest stages for the respective races. 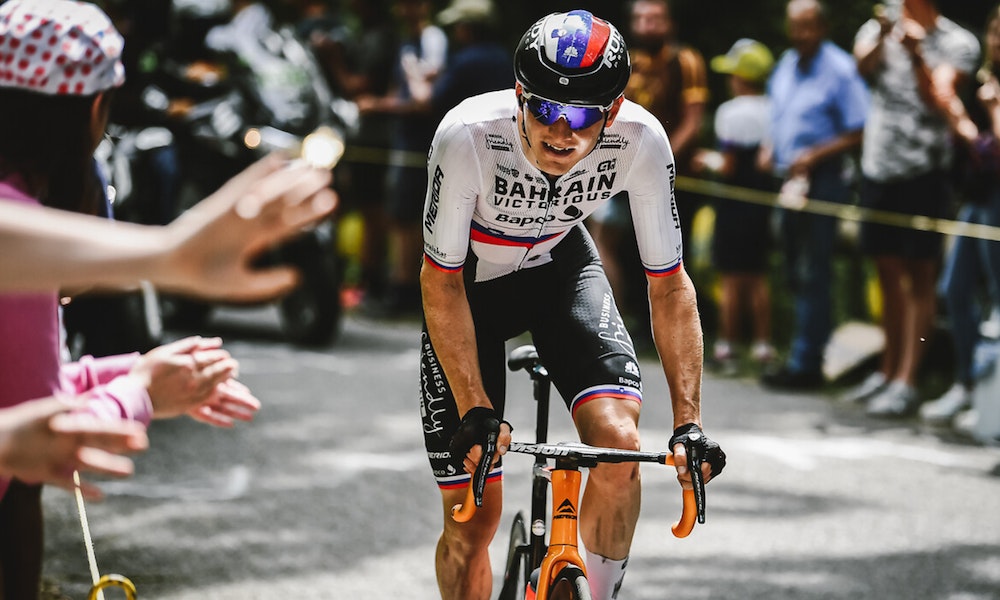 “It hasn’t sunk in,” said Mohorič. “This completes my set as I won [stages] at the Giro and the Vuelta. But this is something else — this is the biggest race in the world.”

The second half of the 249.1km stage 7 route — the longest Tour stage since 2000 — from Vierzon to Le Creusot, went through the Morvan forest and featured five climbs with almost no respite between them.

Stage 7 was a race in two parts with the first half of the day mostly flat and the second half quite lumpy.

A 28-man break which included the yellow and green jerseys took advantage of this; Mark Cavendish (Deceuninck-Quick-Step) in green scored additional points in the sprint competition before retiring to the main bunch, while Mathieu van der Poel (Alpecin-Fenix) in yellow wanted to put time into his competition and defend his overall for an additional day.

Vincenzo Nibali (Trek-Segafredo), Wout van Aert (Jumbo-Visma), Simon Yates (Team BikeExchange) were also in the front of the race to improve their overall standings, while Tadej Pogačar (UAE-Team Emirates) and his compatriot and GC hopeful Primoz Roglic were left in the main bunch, behind.

Jasper Stuyven (Trek-Segafredo) and Victor Capenaerts (Qhubeka-NextHash) chased after and connected with the two on the front to share the work and hunt for a stage victory, with 200km already behind them. 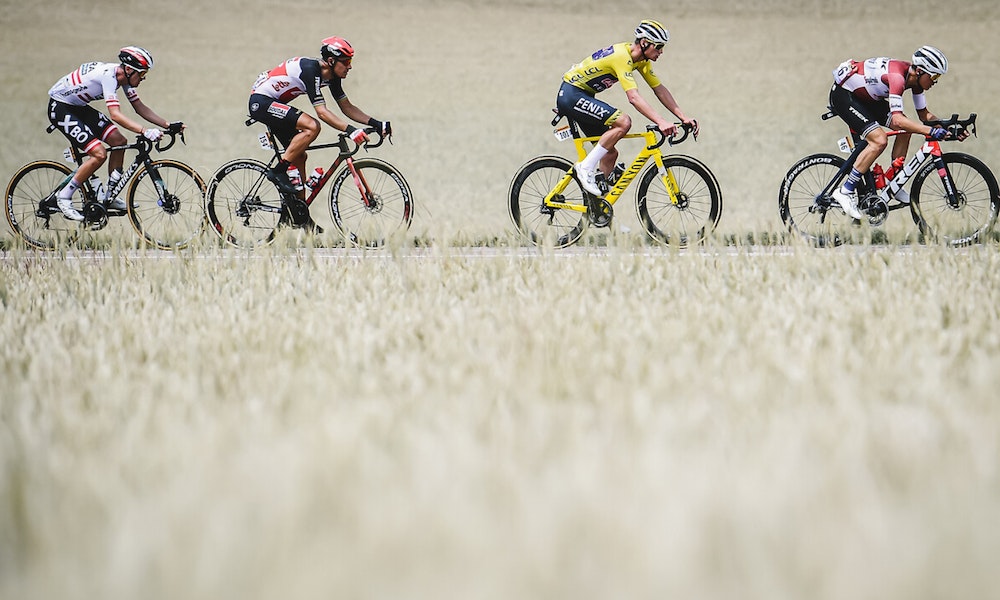 Just 5km later, Capenaerts was dropped, and the three left at the front pressed on while a touch of wheels brought down Jonas Vingegaard (Jumbo-Visma) and Ide Schelling (Bora-Hansgrohe) in the polka dot jersey in the peloton.

As the race traversed the lumpy final 25km, just 13 riders remained from the initial 28. From this reduced group, Patrick Conrad (Bora-Hansgrohe) chased after the three at the front of the race. As the race shattered into several chase groups riders showed the strain of the long stage.

Nibali tried to escape and pursue Conrad, but Van der Poel and van Aert marked the “Shark of Messina” seeing him as a GC threat.

At the front, Mohorič dropped Stuyven and van Moer, and rode into the KOM jersey with the additional points gained at 18km remaining.

Some six-and-a-half minutes behind, defending Olympic champion Greg Van Avermaet (AG2R-Citröen) and Primož Roglič (Jumbo-Visma) were put into distress and dropped from the main peloton, their legs and their race breaking apart.

With the news that Roglič was in trouble, Richard Carapaz (Ineos Grenadiers) launched a move to gain time in the overall standings while Pogačar remained unfazed.

At 12km to go, American Neilson Powless (EF Education-Nippo) went off the road on a descent that wound to the right. He quickly remounted his bike, unharmed, and re-joined the chase to the line.

Mohorič continued his raid and came across the finish line to take his first Tour stage win while several minutes behind, Carapaz strengthened his GC position.

“I knew I had a good shot, today and stage 18 were most suited to my characteristics. I also knew van der Poel was there to keep the jersey. I got myself in the first group, it was hard because I was the only one from my team in the group,” said Mohorič. “At 1km I realized I’d won a stage in the Tour and that makes me very proud.”

Stuyven held the chasing bunch and came through for second on the stage, while van der Poel took over the lead from van Aert in the final kilometre.

The yellow jersey even launched a sprint for third on the stage to take valuable time-bonus seconds but came up just a meter shy of Magnus Cort Nielson (EF Education-Nippo). 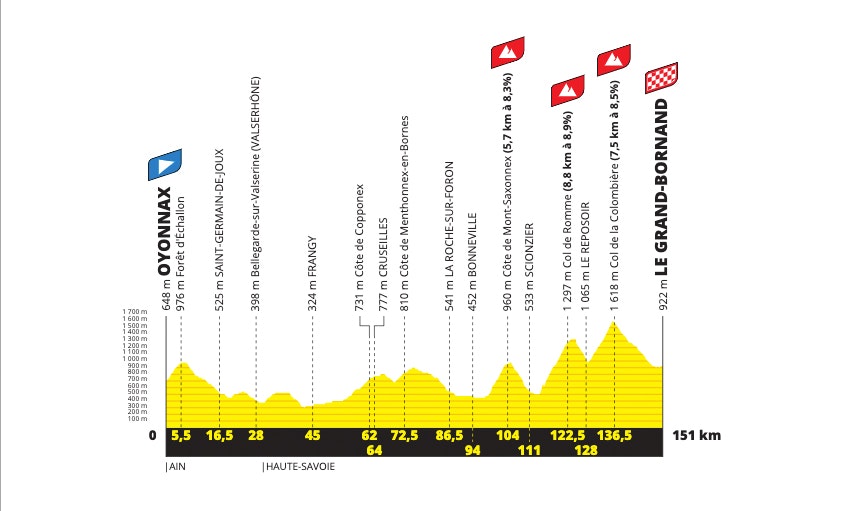 Saturday’s stage 8 from Oyonnax to Grand Bornand is the first Alpine stage of the 2021 Tour de France.

The 150.8-kilometre route takes on five categorized climbs, the final three all being cat 1 ascents, before a steep and fast 14km descent to the line.