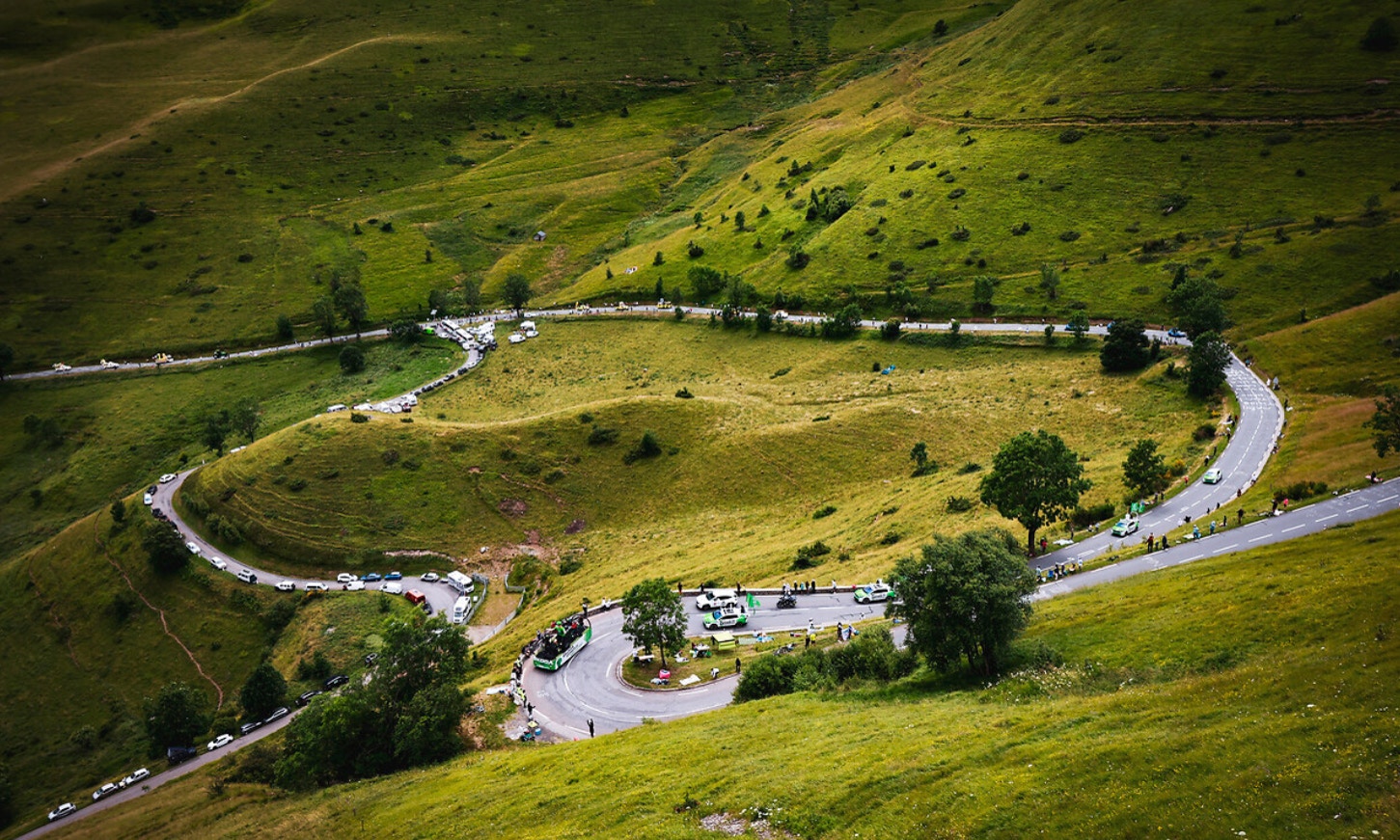 Tadej Pogačar, in the yellow jersey of the GC leader, was the best climber and took a hard-fought victory on stage 17 of the 2021 Tour de France.

In the final 6 kilometres of the stage, Richard Carapaz (Ineos Grenadiers) and Jonas Vingegaard (Jumbo-Visma) traded attacks, with the white jersey finally coming around Carapaz — the winner of the 2019 Giro d’Italia — gaining four seconds at the end of the stage plus, an additional six seconds time bonus. Vingegaard now leads Carapaz by a scant four seconds in the general classification. 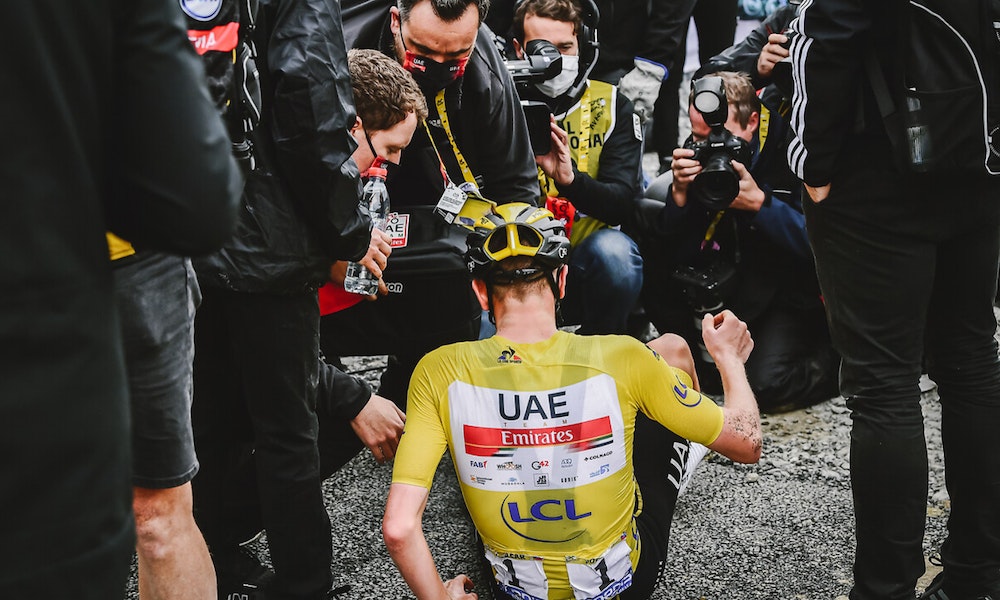 “It was the most difficult stage of the Tour, and I dedicate this win to my team who worked so hard for me here,” Pogačar said. “I tried several times to attack to win alone, but I failed. I just sprinted in the last 60 meters.”

While aggressive in the final climb, Frenchman David Gaudu (Groupama-FDJ) could not score a win for France on Bastille Day, marking four years since this last happened.

With a day in the Pyrénées behind and another tough day of climbing ahead Thursday, the battle for the GC heated up quickly on stage 17.

A break got away after 20 kilometers in, and the six of Anthony Turgis (TotalEnergies), Anthony Pérez (Cofidis), Lukas Pöstlberger (Bora-Hansgrohe), Danny van Poppel (Intermarché-Wanty Gobert Materiaux), Dorian Godon (AG2R-Citroën), and Maxime Chevalier (B&B Hotels) were off the front by eight minutes at 85km to go. 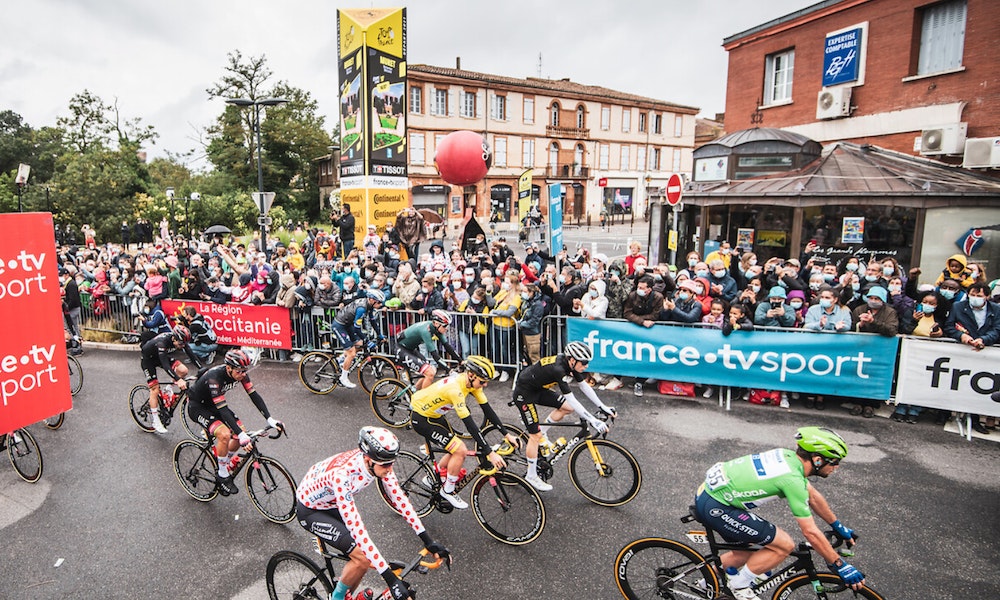 Van Poppel charged the intermediate sprint at 64.5km to go and scored green jersey points from the break. Some 8:35 behind, Deceuninck-Quick-Step lined up to deliver Cavendish to a position to take the remaining single point in this competition.

Matthews, with a setup by teammate Luka Mezgec who lead the charge for the green banner. Cav marked him but could not come around the Australian sprinter, while Colbrelli could barely hold onto the Manx Missle’s wheel.

The best climber competition was also shaking out, when at 55km to go Nairo Quintana and Elie Gesbert (Arkéa-Samsic), Wout Poels (Bahrain-Victorious), and Pierre Latour (TotalEnergies) in the polka dot jersey went off the front of the peloton. Still, this move came to nothing and was brought back within a few kilometres on the pace set by UAE-Team Emirates.

Turgis lead through the KOM point atop the Peyresourde ascent. Chevalier found the pace too high and was shed from the front group on the climb. Behind him, Latour continued to tap a tempo to bridge to the front six riders.

UAE-Team Emirates continued to apply pressure to the GC race, towing Pogacar along at a hard tempo on the climb.

And then Postleberger and van Poppel were popped from the front.

Onto the ascent of the Col de Val Louron-Azet, Pérez attacked the remains of the break, which was folded back into the yellow jersey bunch, which had been thinned to just 41 riders. 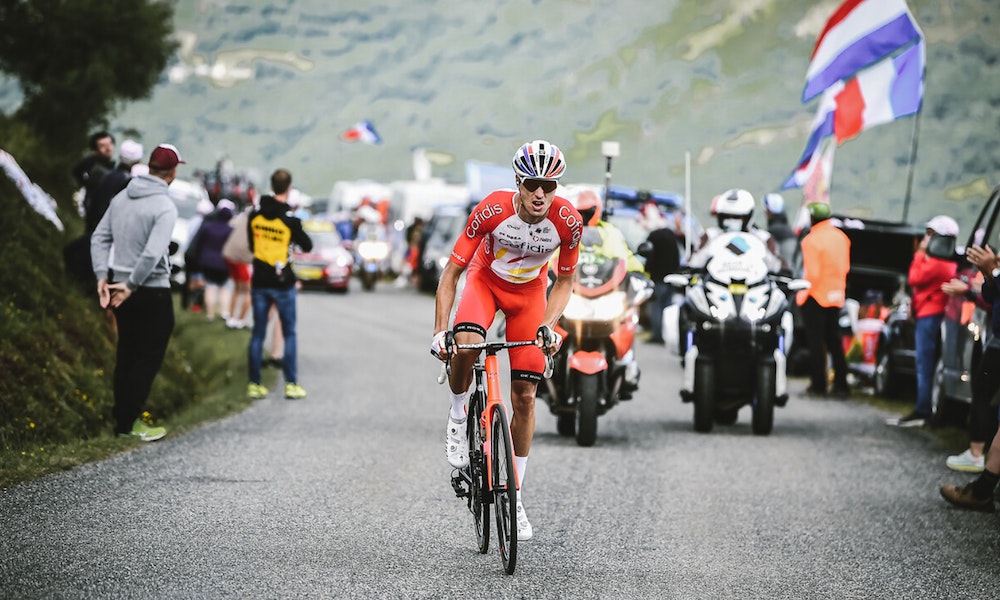 Into the final climb, French riders Pérez and Godon had a lead of 76 seconds over Turgis, who was nearly 2:45 ahead of Pogačar’s group.

Davide Formolo (UAE-team Emirates) dropped off the front of the yellow jersey’s pace group when his work for the day was done. Teammate Brandon McNulty took over leading duties, trailed by Rafal Majka and then Pogačar. This pace was too much for world champion Julian Alaphilippe (Deceuninck-Quick-Step), Richie Porte (Ineos Grenadiers), and Mont Ventoux stage winner Wout van Aert (Jumbo-Visma).

The fireworks on the front of the race went off when Pérez attacked, looking for the stage win by a French rider on Bastille Day.

And then it was McNulty’s who swung off of the front when work was done at 12km to go. He was joined by Geraint Thomas (Ineos Grenadiers), who found the tempo too much.

Formolo continued to press upward and brought Pogačar to the final 9km. Just behind, Jonas Vingegaard (Jumbo-Visma) was escorted by teammate Sepp Kuss, the stage 15 winner.

Poels, still on the hunt for KOM points, was shed from the front of the yellow jersey group along with Guillaume Martin (Cofidis) and Gaudu.

Pérez continued his assault on the stage as the lone Frenchman on the front.

As Pello Bilbao (Bahrain-Victorious) was brought back to the yellow jersey group at 8km to go, Rafal Majka launched Pogacar up the road. Only Jonathan Castroviejo (Ineos Grenadiers), Carapaz, Vinvegaard, Ben O’Connor (AG2R-Citroën), and Rigoberto Urán (EF Education-Nippo) could go with the yellow jersey.

Just 2km later, O’Connor and Castroviejo were dropped on the next acceleration by the yellow jersey, while Urán was gapped by several bike lengths.

With 6km to go, the three on the front who were the top three on the GC — Pogačar, Carapaz, and Vinvegaard — distanced themselves from six chasers. 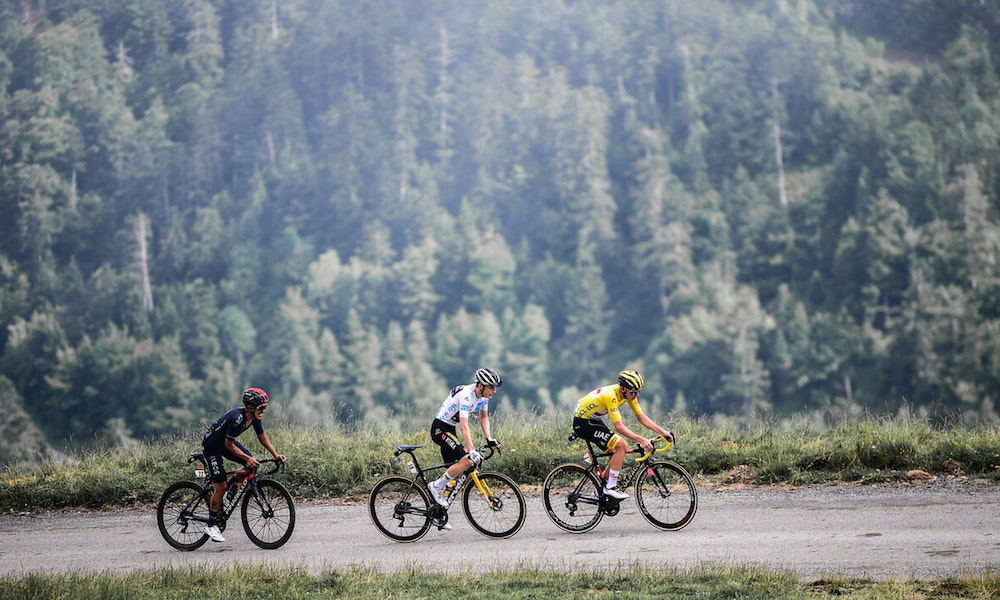 Vingegaard and Pogačar continued to press each other while Carapaz stalked from behind, trying to stick with the leading wheels.

With 5km to go, Gaudu had dropped to nearly a minute back of the three GC and stage leaders.

Carapaz looked to be suffering, gritting his teeth, and refused to pull through at 4.5km.

Behind the front three, Gaudu leads the French nation's hope for a stage win, while Urán leads the remains of the front of the race, which included Dylan Teuns (Bahrain-Victorious) and Wilco Kelderman (Bora-Hansgrohe).

Pogacar attacked again at 2km to go and was covered by the Vingegaard and Carapaz. The white jersey did all the work to cover every move by the race-leader into the final 2km until Carapaz went at 1.3km to go.

This surge dropped Vingagaard as the three went into a tunnel. Only Pogačar could go with the Ecuadorian, also grand tour winner.

Vingegaard clawed his way back onto the back of the lead two just as Pogačar attacked to take the stage win.

Vingagaard, on the momentum of the work he did to get back to the front of the race, came past Carapaz in the final 10m.

Finishing fourth on the stage, Gaudu commented, “I’m happy with my performance. In the third week of the big tour, you never really know, but I had recovered from yesterday. Up front, the three were the strongest. I could not accompany them. When they attacked, I couldn’t get there on my own. I have no regrets.” 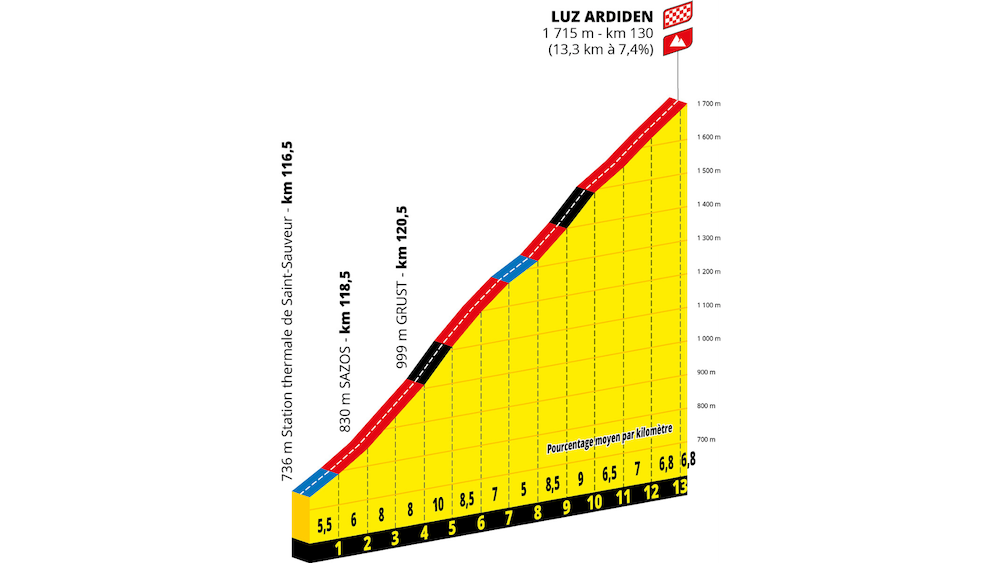 Stage 18 is another day for the climbers and takes on two beyond category climbs, the Col du Tourmalet and the ascent to Luz Ardiden.

The 129.7km stage is the final mountain stage of the 2021 Tour de France and the last chance for the climbers to gain time on the rouleurs before the final time trial.