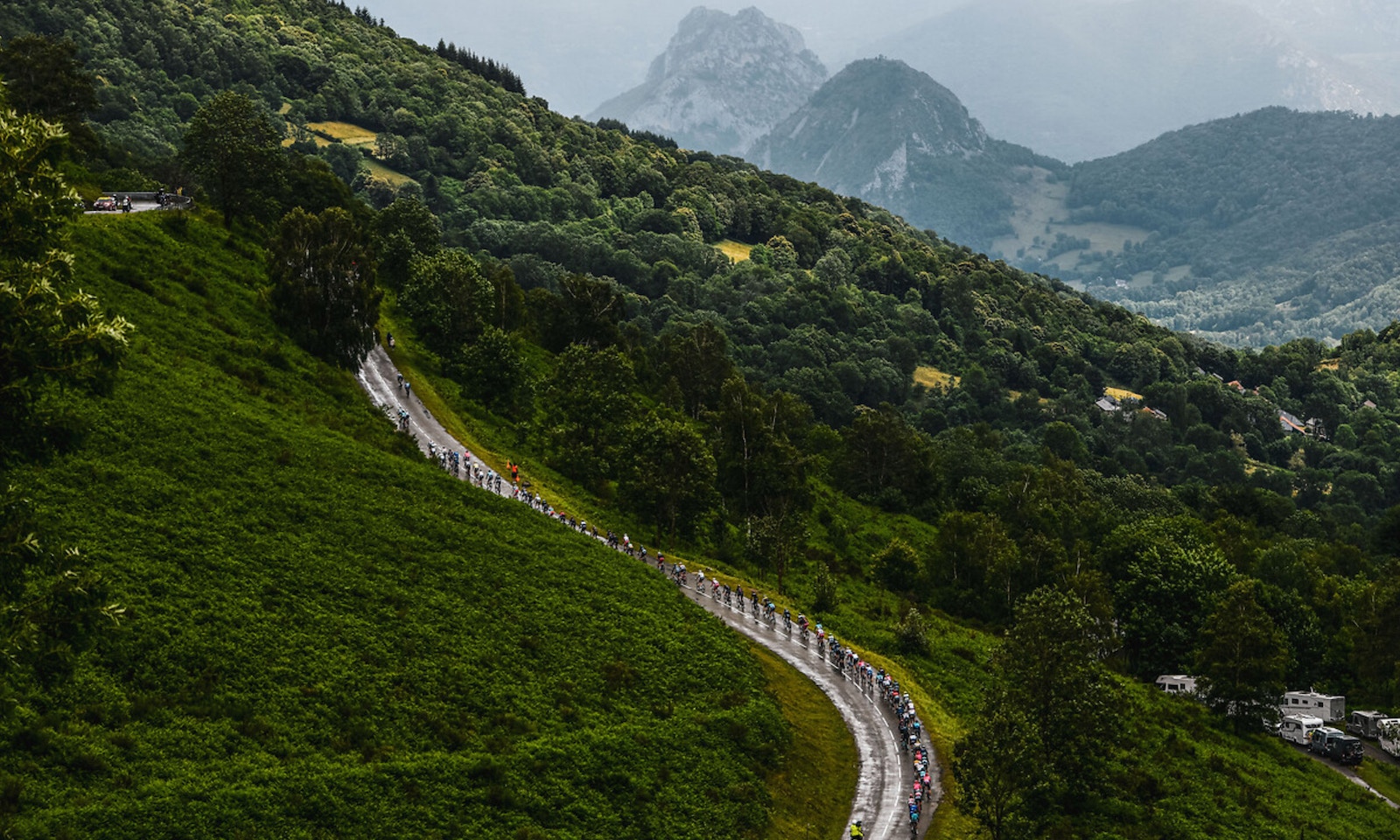 Launching a successful raid off the front of the break, the Austrian time trialed his way to the stage win ahead of a 10-man break, and some 14 minutes ahead of the yellow jersey group.

“To win a stage here makes me really proud. I was three times in the break, and I was always waiting for the final. It sometimes was not the best decision, and I said to myself, OK, when I get one more time in this situation, I am the guy [to attack],” the stage winner said. “I am really happy it worked out and that I had the legs to make it to the finish. There was some time to celebrate and I really believed in it with 100m to go. I am super, super happy.” 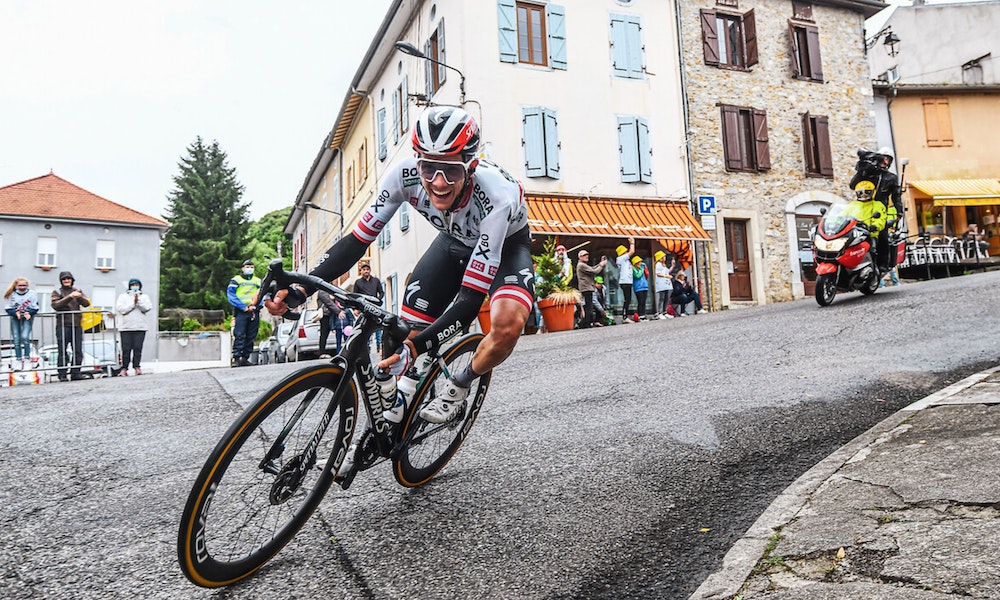 Sonny Colbrelli (Bahrain-Victorious) sprinted ahead of Michael Matthews (Team BikeExchange) for precious green jersey points, and to take second and third on the stage.

This is Konrad’s first Tour stage win — which made him the third Austrian to ever win a Tour stage, after Max Bulla and Georg Totschnig — and his first road race win since 2014 other than his national championships win. 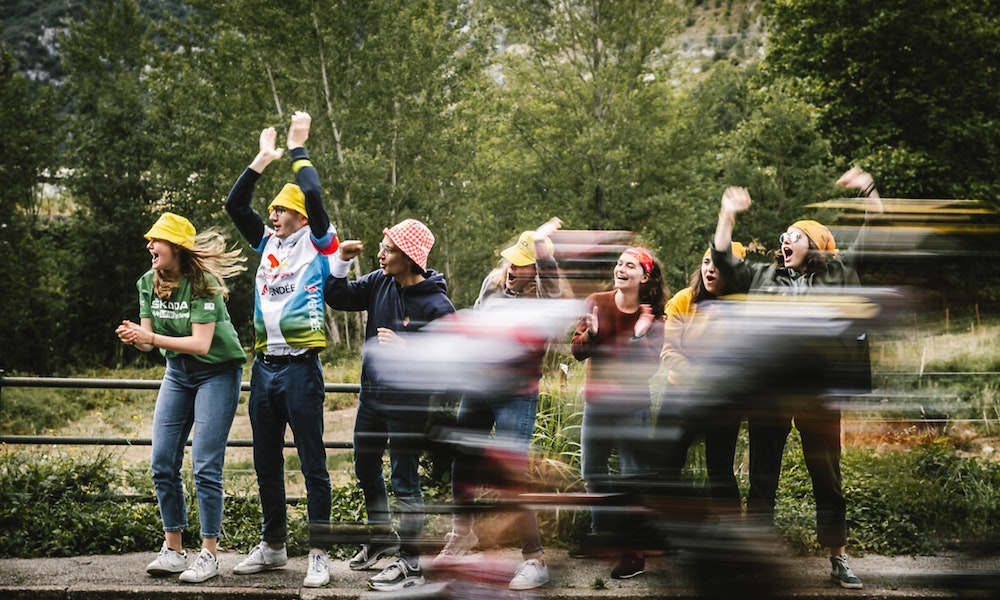 Shortly after the start of the stage, the CPA riders’ union petitioned for and then took a short time-out for a change of clothes in the cool, neutral start on a descent. At an altitude of 2,000m, in Andorra, the peloton rode some 20km and lost nearly 900m of elevation before the race commissars dropped the flag for the start of the stage.

Two kilometres later, Asgreen was joined by his teammate and the former world champion. Some 3km later, Cav slipped off the back of the main bunch.

The three on the front were brought back at 112km to go, on a very wet descent. 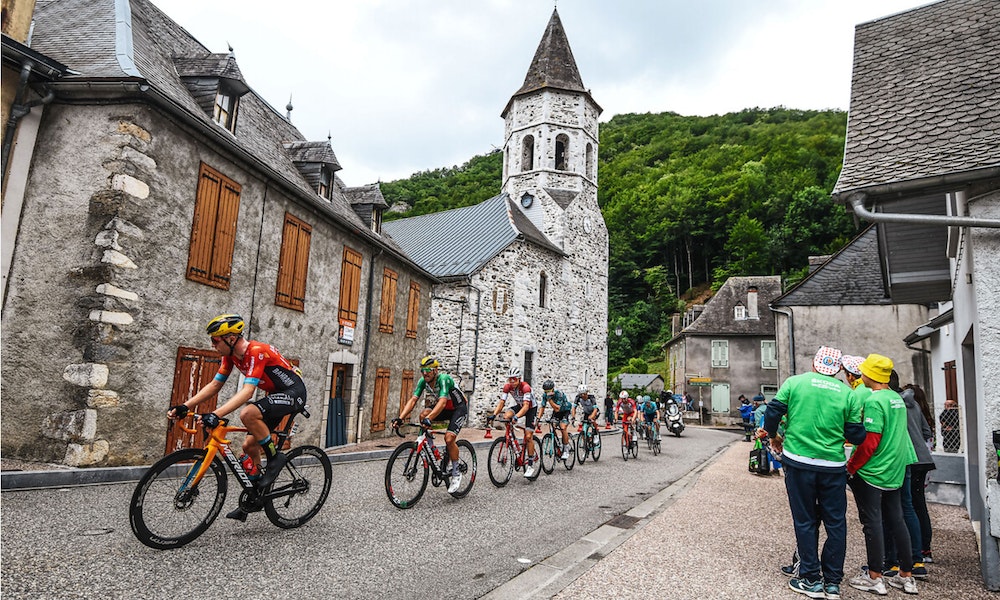 At the intermediate sprint point, Michael Matthews (Team Bike Exchange) denied Sonny Colbrelli (Bahrain-Victorious) a handful of points in the green jersey competition. Matthews was 50 points behind Cav in this competition with this addition to his green jersey tally.

Shortly after this intermediate sprint point, the groupetto with Cavendish made its way back into the main bunch, while a new group formed ahead of the yellow jersey in the peloton.

Konrad and Wout van Aert (Jumbo-Visma) lead the chasing 11-man group. When this group was caught at 70km to go, Juuls-Jensen was dropped by Konrad, Bakelants, and Doubey.

As the race ripped towards rain-slicked roads, the three on the front put more time into the new groupetto, which again had Cav in it, and was nearly 10 minutes back as they headed into the final ascent of the day, a cat 4 climb.

With 40km remaining, the break of three — Juul-Jensen, Bakelants, and Doubey — had 36 seconds on a group of 10.

Doubey was soon shed and absorbed by the chasing group while Konrad and Bakelants pressed on.

Konrad escaped and stayed away from David Gaudu and Colbrelli, as the pursuers descended very cautiously.

Colbrelli — hungry for more points in the race for the green jersey — was working well with Gaudu to bring back Konrad. Behind him van Aert lead the chase, helped by Toms Skujiņš (Trek-Segafredo) at 20km to go with a 12:24 gap to the yellow jersey group.

Gaudu and Colbrealli were caught by the chasing bunch 5km later and one minute behind Konrad.

Konrad was up the road and gone, after the final descent, and the 10-man pursuit did not work well to bring him back.

Matthews marked Colbrelli, behind Skujiņš, and their battle to unseat Cav from green heated up. 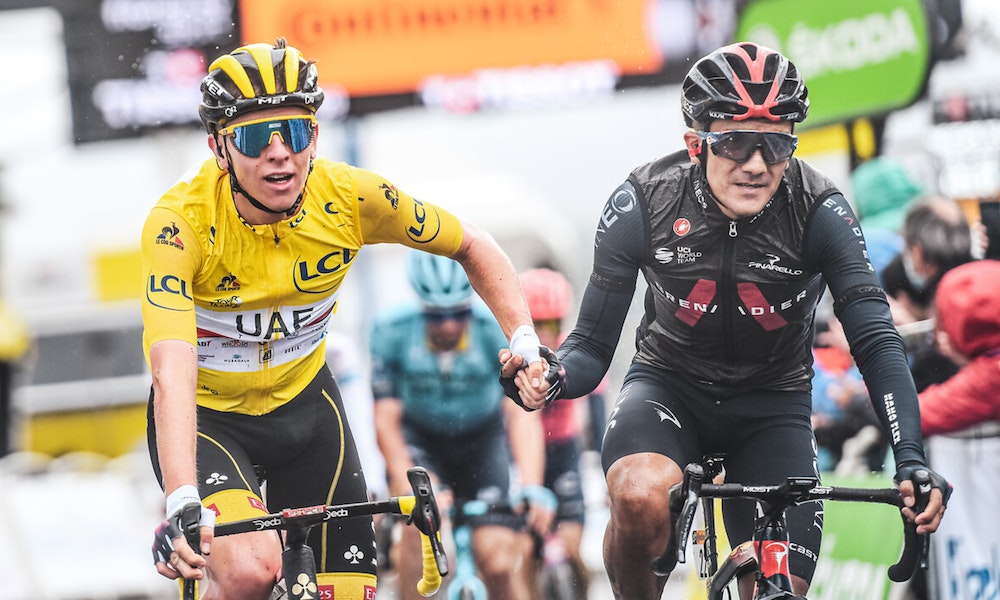 While Konrad had already crossed the line, the race for the minor podium spots came down to dash for the line, with Colbrelli denying Matthews with a bike throw.

Behind the front bunch and off of the peloton, Cofidis attacked the main bunch, aggravating Wout van Aert (Jumbo-Visma) who angrily rode through the summit of the final climb, forcing a split in the GC.

Just for good measure, Carapaz edged out Pogagar and Vingagaard in a dash for the line. 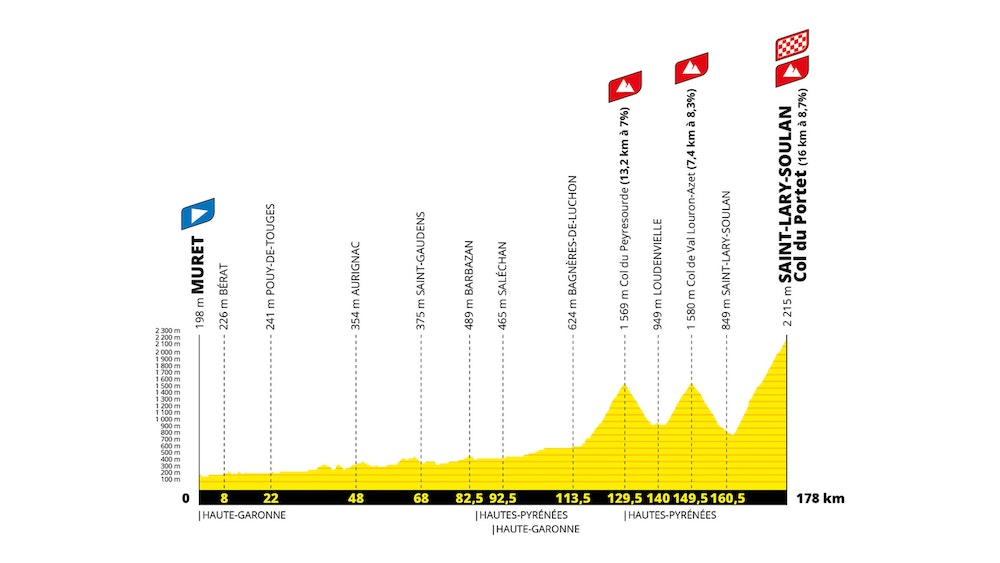 Stage 17, 178.4km from Muret to Saint-Lary-Soulan Col du Portet takes riders over two cat 1 climbs — the Peyresourde and the Val Louron-Azet — before the final ascent to the line.

The first 118km of the stage are flat, and inviting for a break to form.

The finale to Portet, which rises to 2,215 meters (7,267 feet), is the hardest climb in the Pyrénées and may cause combustion in the race for the green jersey if things go wrong in the first part of the stage.