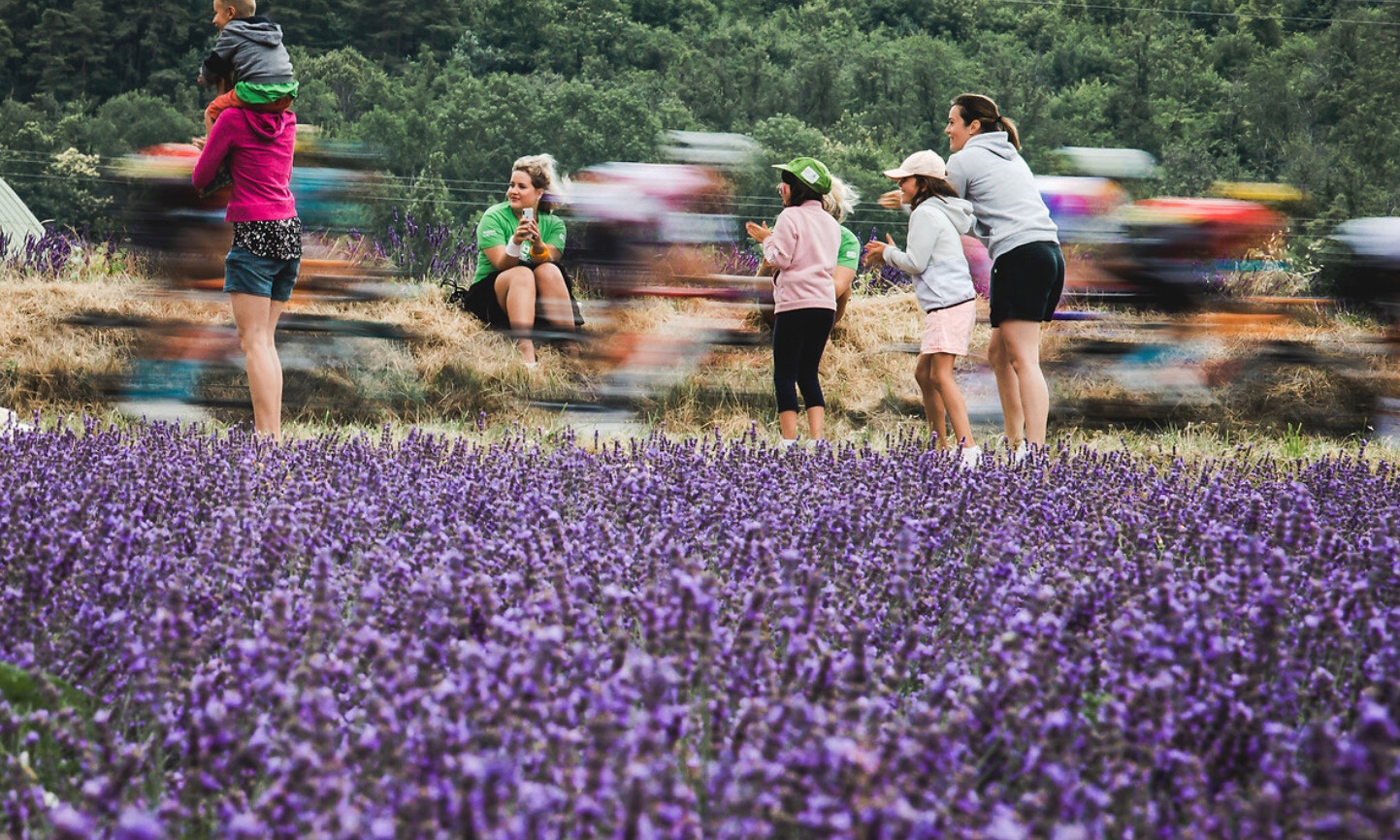 Mark Cavendish (Deceuninck-Quick-Step) won stage 10 of the 2021 Tour de France on another perfect leadout from his team.

The “Manx Missile” is now just one win shy of equalling the record for Tour wins by a single rider set by Eddy Merckx. 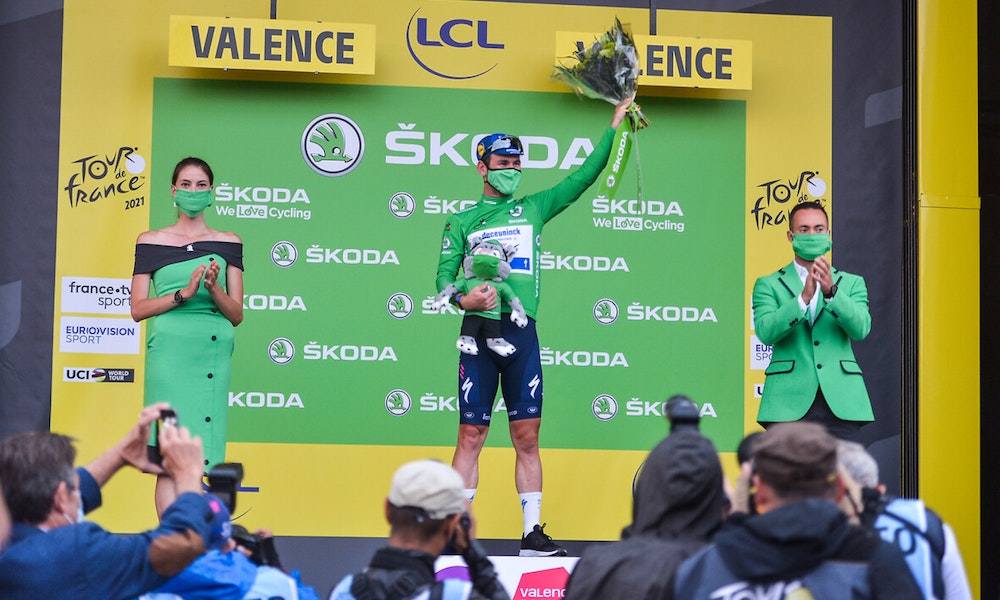 Into the final 150 meters, Wout van Aert (Jumbo Visma) and Jasper Philipsen (Alpecin-Fenix) tried to come around Cav, however when his leadout man Michael Mørkøv swung off, the pace was so high, they could not come around the “Wolfpack.”

“Textbook leadout. Get the lads on the front, pull as fast as they can, so that nobody can come up past you in the finish,” Cavendish said. “I didn’t make it the last time we came here in 2015 — I got dropped and Greipel won.”

“I didn’t really do anything until [the final] 150 meters. It was the team and I have to thank them for everything,” Cav added.

With rain threatening the finale of the stage, sprinters’ teams and GC teams kept their favored riders near the front for most of the stage.

A minor tumble from overlapping wheels took down Mads Pederson (Trek-Segafredo) and Simon Yates (Team BikeExchange), but the two limped their way back into the back of the field.

Cavendish was near the front of the group for the first intermediate sprint, however, he did not contest it. Sonny Colbrelli (Bahrain-Victorious) took the maximum points, while Michael-Matthews (Team BikeExchange) was second through this banner.

After this point, the sprinters’ teams started to wind in the leash on the two escapees — their advantage at 90km to go was down to 1:42.

Richie Porte took a tumble some 40km later. He was paced back to the field by the Ineos Grenadiers, however, this took some time and the British squad was not back in the group until 45km to go.

Mørkøv brought Cavendish over another relatively easy climb, and they rode safely in the middle of the bunch at the front of the race.

The pace stayed very high in the second half of the stage, and the gap to the front was just 65 seconds into the final 40km of racing.

Houle pressed on solo in hopes of getting the most aggressive rider of the day award when van der Sande gave up the break at 38km to go. However, Houle was caught some 2km later.

Team BikeExchange took a pull on the front kept the speed high, stringing out the peloton into a long line of riders, distancing Pederson who had crashed earlier in the stage.

Julian Alaphilippe and Tim DeClerq did a massive amount of work on the front for their teammate in green.

Colbrelli flatted at 28km to go, and the Deceuninck-Quick-Step squad accelerated the pace on this, to distance the Italian national champion. While Colbrelli had a quick bike change, he had to make up 35 seconds, and navigate through the race caravan.

Arkéa-Samsic joined Team BikeExchange and on to the front to set up Nacer Bouhani and Michael Matthews respectively, and Deceuninck-Quick-Step seemed content to let the other squads take some of the work. 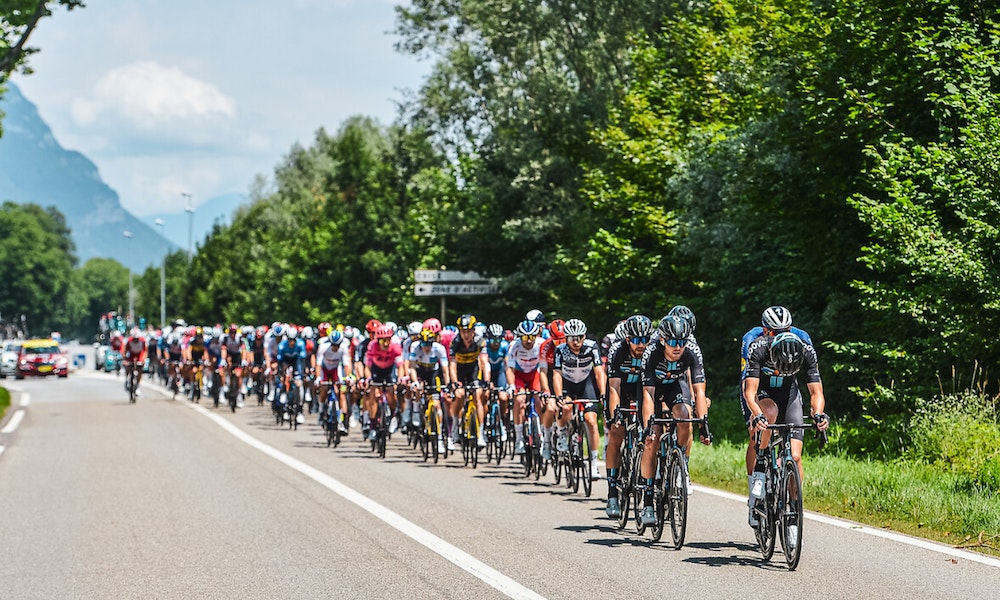 The front of the race stayed single-file into 12km to go as EF Education-Nippo came to the front to help keep the pace high, and keep Rigoberto Urán safe. This split the peloton into a front group, chased by two smaller groups. Ineos Grenadiers had brought Richard Carapaz to the front and shared some of the work with the American squad wearing fluorescent pink.

Colbrelli had made his way to the front again, and while he tried to shadow Cavendish, he was forced closer to the front, while Peter Sagan (Bora-Hansgrohe) and Wout van Aert looked to try to hitch a ride on Cav’s leadout train.

From the 5km to go, the race was dominated at the front by Deceuninck-Quick-Step, with Mørkøv delivering Cavendish to within 150m of the line.

Mørkøv continued his sprint once he swung off, to ensure Cav’s competition did not score points toward the green jersey competition.

Van Aert and Philipsen were close to Cavendish at the line, but had to settle for second and third, while Sagan was distanced in eighth in the final kick.

“You have the winner of the Tour of Flanders, the winner of the world championships, Michael Morkov who is going to the Olympics, the Omloop Het Nieuwsblad winner, all just leaving everything on the road for me,” Cavendish said.

Stage 11 Wednesday is 130km from Sorgues to Malaucène and sees two ascents of Mont Ventoux. This comes after the peloton rides over the cat 1 Col de la Liguière, some 100km from the finish.

The first Ventoux ascent is via Sault on the Giant of Provence’s “easiest” side. The second ascent is from its most renowned flank via Bédoin.

The finish line comes after a 20km descent to Malaucène.