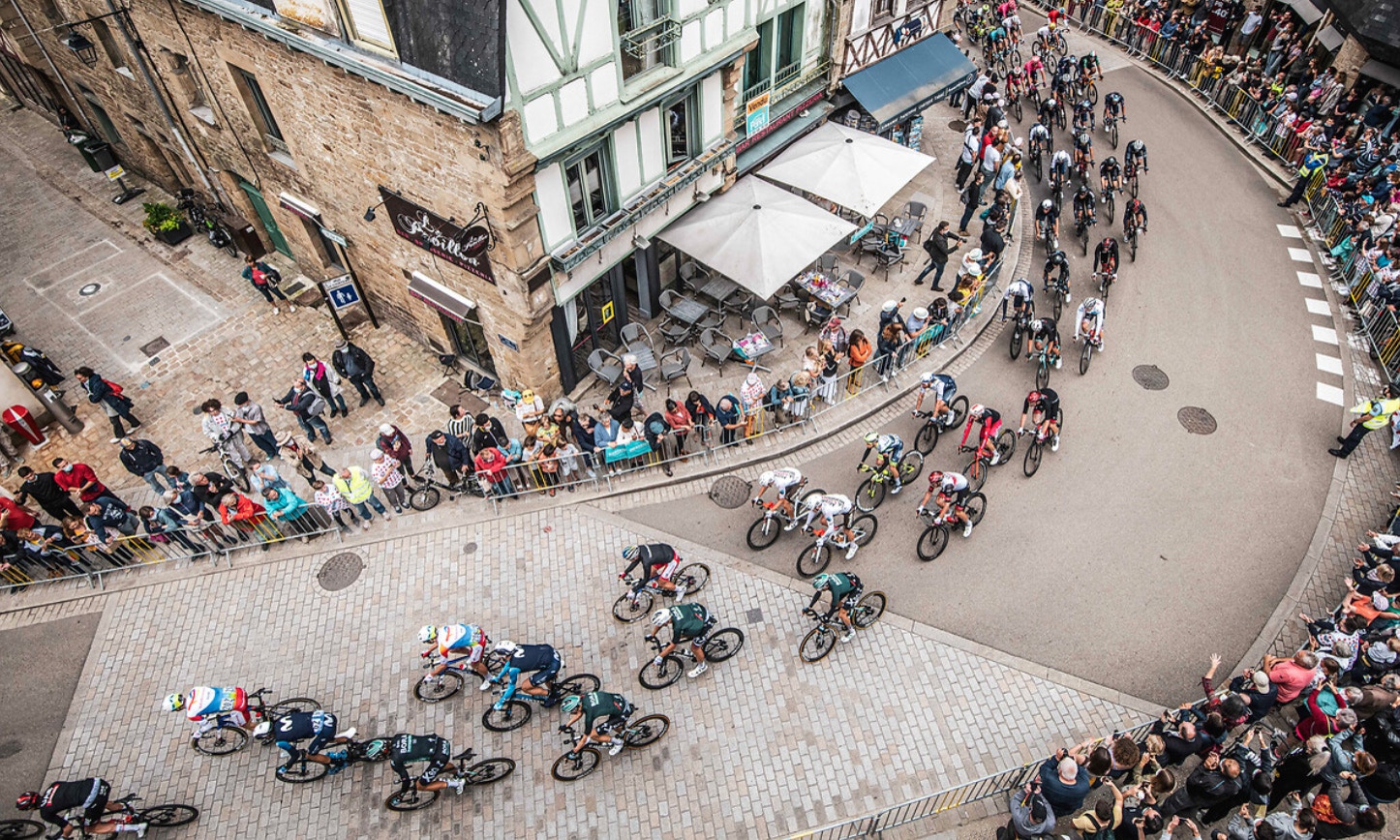 Tim Merlier (Alpecin-Fenix) stayed clear of crashes and carnage to take the win on stage 3 of the 2021 Tour de France.

In the leadout initiated by the yellow jersey of teammate Mathieu van der Poel at the red kite, Merlier launched his winning attack inside of 200m to go.

“I’m living a dream, I think,” Merlier said. “After the Giro, I was already very happy, but now to win a stage at the Tour, the biggest race in the world. I can’t believe it.” 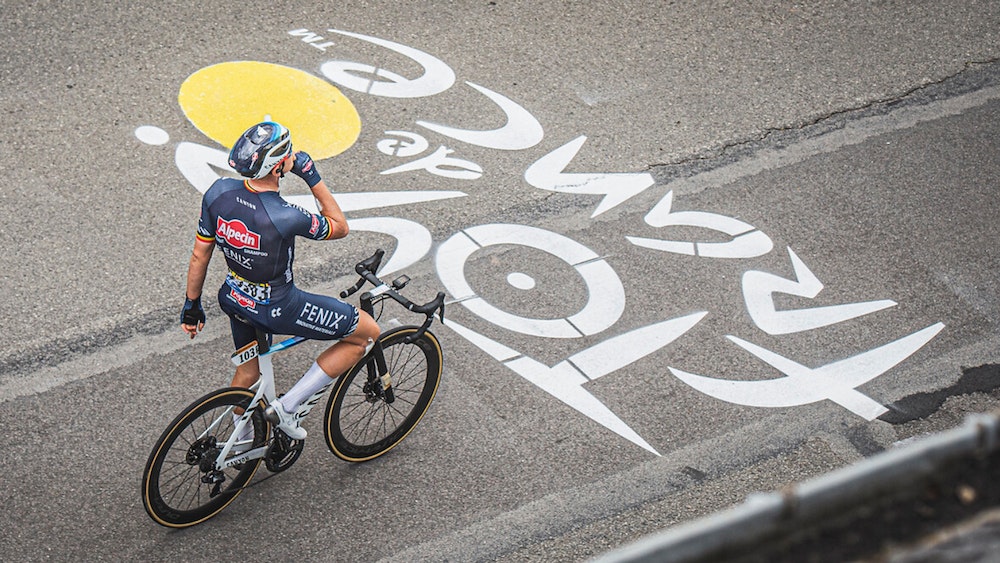 In the final 250m, Caleb Ewan (Lotto-Soudal) touched wheels with Jasper Philipsen (Alpecin-Fenix) and crashed into Peter Sagan (Bora-Hansgrohe). The two sprint stars slid for some distance before coming to rest just before the finish line. While Sagan got up shortly after, Ewan remained on the ground.

“Mathieu said he was going to do the lead-out, and I said, ‘You are crazy,’ but he loves to do it. So then, Jasper Philipsen took over for the last 700m,” added Merlier. “It was a great lead-out, and I just needed to go the last 150m. I looked back, and I couldn’t believe it; there was nobody else on my wheel. There was a crash, and so that would be the reason, I think.” 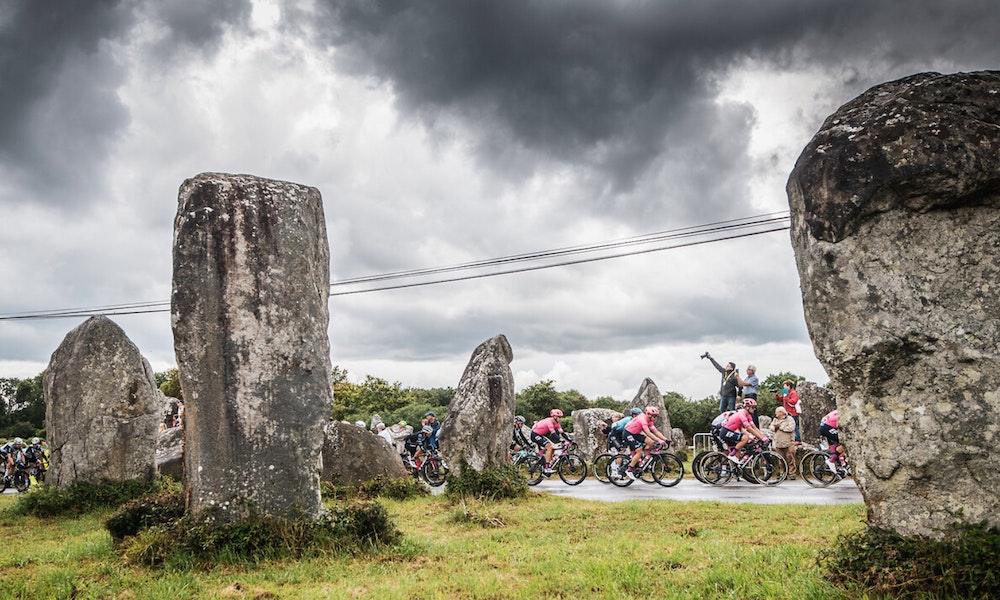 Rainy conditions made for slippery roads in the first hour of racing in the 182.9-kilometre stage from Lorient to Pontivy.

Geraint Thomas (Ineos Grenadiers) touched wheels and went down near La Trinité-sur-Mer, 40 kilometres after the start.

Thomas had predicted a problematic day ahead of the stage start and said, “It’ll be a nervous stage, we are on the tour de France, and things can change quickly.”

Teammate Luke Rowe quickly reacted and told the team car that Thomas was down and dislocated his shoulder. After medical assistance to adjusted Thomas’ dislocated shoulder, Rowe and teammates did the work to bring Thomas back into the peloton.

With five men up the road at 150km to go, the pace was very high, with the peloton ten minutes ahead of the predicted schedule.

The five were Jelle Wallays (Cofidis), Ide Schelling (Bora-Hansgrohe), Cyril Barthe (B&B Hotels), Michael Schär (AG2R Citroën), and Maxime Chevalier (B&B Hotels). They still had two minutes’ advantage with 100km to go, but the pursuing group was moving along at nearly 48kph to bring them back.

Schelling went after more KOM points on the small climb at 90km to go. Upon securing these polka-dot points, he dropped back to the main bunch to presumably assist Peter Sagan with the stage finale.

The four men in the break took the majority of intermediate sprint points: The two B&B Hotels riders Barthe and Chevalier went through the sprint point at the front to take the maximum points. Just two minutes behind them, Ewan surprised Sonny Colbrelli (UAE-Team Emirates), Cavendish, and Sagan to take the remaining sprint points on the right side of the road.

Nervousness in the field 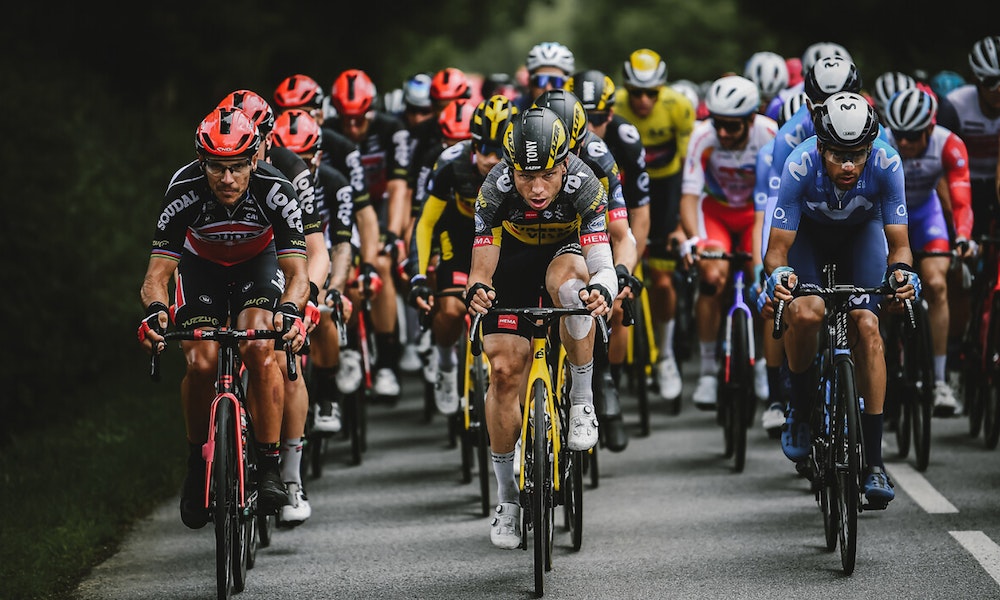 At 45km to go, the situation on the road was EF Education-Nippo at the front for Sergio Higuita, while Ineos Grenadiers and Alepcin-Fenix were pushing the pace to keep riders safe and to bring back the break.

The Sprinters’ teams were massing on the front at 20km to go, to bring back the break, which refused to abandon their mission. This chasing pace brought the gap to the break to just 58 seconds.

Sagan and current world champion Julian Alaphilippe (Deceuninck-Quick-Step) chased up the right side of the road and on the grass to get back to the very front of the pursuit. Once back on the front, Alaphilippe did not appear to take part in setting up the leadout for Mark Cavendish.

Barthe dropped from the break of the race with 12km to go, exhausted from the work on the front.

A crash at 11km to go brought down several Groupama-FDJ and Movistar riders, as the pace went way up on the acceleration by Team DSM and Lotto-Soudal for Cess Bol and Ewan.

The final 1.6km was a straight shot to within a few hundred meters from the line, which had a few minor bends in the route. Jostling on the front inside of 10km to go was made challenging by the narrow roads.

Pogačar and Roglič lose time, yellow jersey to the front

Inside of 10km to go, Valentin Madouas (Groupama-FDJ) tangle with Movistar’s Miguel Ángel López, while separately Primoz Roglic and several of his Jumbo-Visma teammates went down.

Roglič, in a tattered jersey with scrapes on his left leg, thigh, elbow, and shoulder, chased after the peloton, lead by the remains of his team.

Jumbo-Visma was already in distress as the crash at 40km into the stage Thomas forced the abandonment of Robert Gesink.

The break was finally absorbed at 5km to go, on the pace set by Bahrain-Victorious and Alepcin-Fenix.

Another crash at 4km to go brought down several Bahrain-Victorious riders, including Jack Haig and also caught up defending Tour champion Tadej Pogačar behind the riders strewn on the ground.

Haig was later forced to abandon due to injuries sustained in the crash.

With a thinned field and a high pace at 2km to go, van der Poel went to the front and drove the pace to inside of 1km to go for Tim Merlier.

“I like to do it, and it’s really cool to do something back for the guys who always do something for me. I’m glad to repay the favour,” said van der Poel. “Think all the rest that comes is a bonus [for the team] we can already say we have an amazing Tour de France.”

“It was super hectic with a lot of crashes, so I also just wanted to stay in front. I felt really good today, maybe because of the yellow jersey, I don’t know,” van der Poel said. “I know that Tim likes it if the last 2-3ks are fast. I did the lead-out until the last K, and I know I’m just a few seconds ahead of Alaphilippe, so I had to stay in the wheel.”

Tuesday’s stage 4 covers 150.4km; from Redon to Fougères is not pan-flat but is expected to be very fast.

Van der Poel is looking to hold on to the overall lead, and any of the sprinters who can navigate the undulations along the route will be stage hunting.