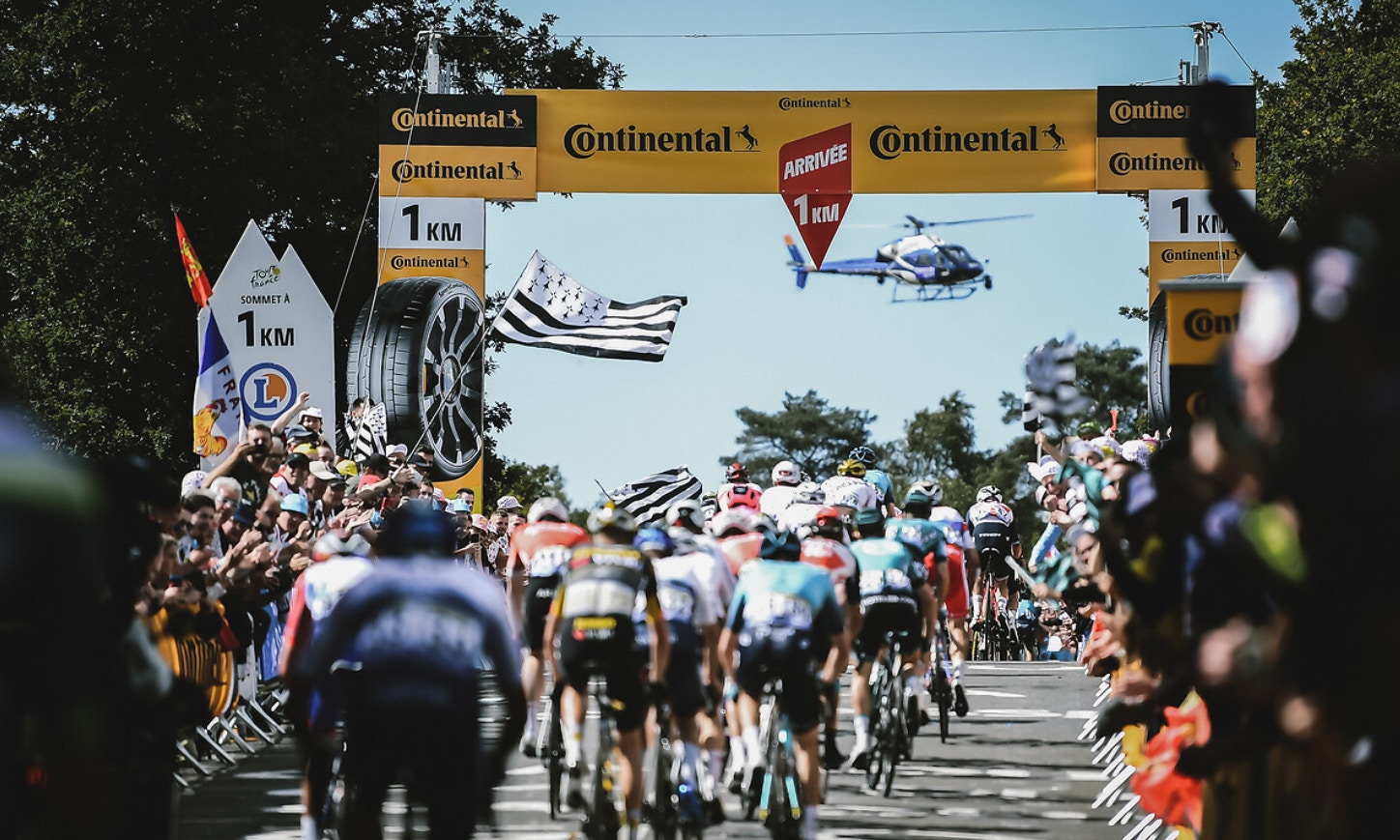 Mathieu van der Poel (Alpecin-Fenix) rocketed from the group of favourites to win the second stage of the Tour de France.

The grand tour rookie kicked hard with 700 meters to go to distance a select group and score his Tour stage win on just the second day of trying. Van der Poel also grabbed the yellow jersey from Julian Alaphilippe (Deceuninck-Quick-Step) with his monster move on the Mur de Bretagne hilltop.

Tadej Pogačar and Primož Roglič were next across the line, neck-and-neck at six seconds back. Overnight GC leader Alaphilippe finished fifth on the stage and drops to second overall, eight seconds down. 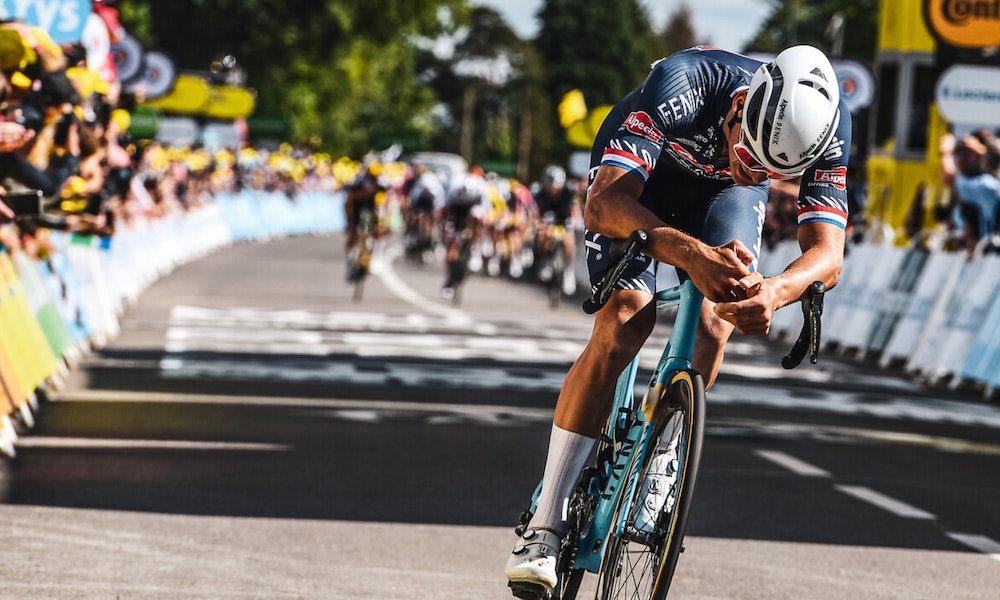 “I have no words, I don’t know what to say,” van der Poel said shortly after the finish.

Van der Poel had attacked on each of the stage’s two ascents of the testing Mûr de Bretagne climb. His first move with 15km to go landed him the bonus seconds he needed to move into the yellow jersey should he claim the stage.

“I gave everything I’ve got first time over the Mûr because I knew I needed the bonus seconds if I wanted the jersey,” he said. “It was my last chance to get yellow – it’s incredible.”

Van der Poel’s Alpecin-Fenix team had ridden the opening stage of the Tour in a retro kit playing tribute to Raymond Poulidor, his late grandfather. The 26-year-old paid tribute to his legendary family member.

“I was thinking of my grandfather,” he said tearfully before cameras panned away.

The run toward the steep lower slopes of the Mûr had made for a pseudo bunch sprint as trains massed at the front to position their leaders for a clean start to the climb. Ineos Grenadiers swamped the front in the 10 percent opening pitches as Geraint Thomas sat second-wheel.

A handful of flurries flew off the front only for the Richie Porte-led peloton to pull them in. Van der Poel, Nairo Quintana (Arkea-Samsic) and Sonny Colbrelli (Bahrain-Victorious) all attempted to go clear as the front of the race surged and slowed.

Van der Poel landed the hammer blow at 700 meters to go. The Dutchman’s trademark kick distanced the bunch with ease anf gave him a clear gap as he went on to take a solo win that made for a throwback to Alaphilippe’s stage one victory. 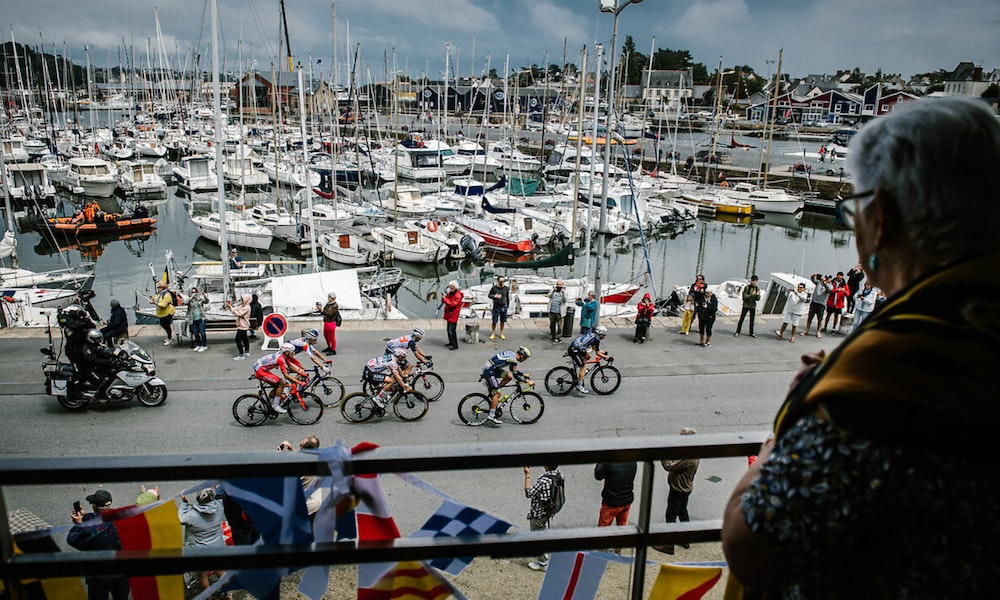 KoM classification leader Schelling, Perez and Theuns each proved the fastest to the top of the stage’s first three classified climbs as the peloton left them to scrap among themselves.

Theuns and Cabot were the last two to remain out front. Their big day out was ended by the huge upping of pace from the peloton as the race hit the first ascent of the Mûr just seconds ahead of van der Poel’s first attack on the Mûr.

Van der Poel attempted a trademark long-range move on the first of two ascents of the Mûr. The Dutchman rocketed from the bunch only to fade as he went over the summit, but he did enough to claim the bonus points he needed to secure yellow.

Alaphilippe, Pogačar and Roglič led the chase for bonus time over the peak of the climb, with Pogačar edging out Roglič for second place to gain a few valuable seconds.