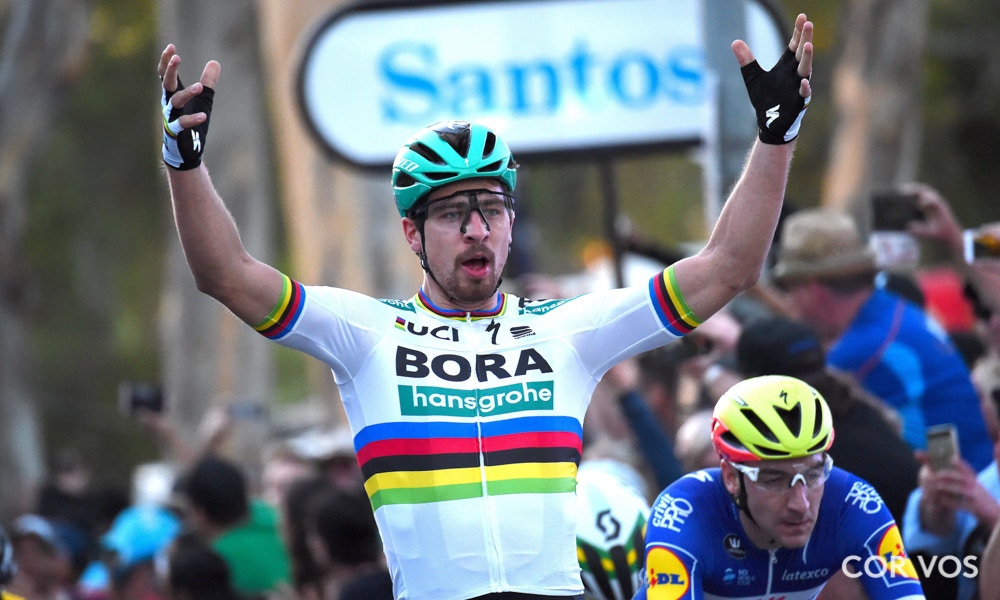 ADELAIDE, Australia (CT) – Three-time world champion Peter Sagan (Bora-Hansgrohe) has started his season in perfect fashion, winning the People’s Choice Classic criterium on the opening night of the Santos Tour Down Under.

Sagan’s Bora-Hansgrohe team took control at the front of the peloton in the closing laps of the 22-lap race as the sprinters’ teams jostled for position. Sagan came from a long way back in the sprint but when he hit the front no one was able to come around him.

Sagan’s Bora-Hansgrohe team took control at the front of the peloton in the closing laps of the 22-lap race as the sprinters’ teams jostled for position. Sagan came from a long way back in the sprint but when he hit the front no one was able to come around him. 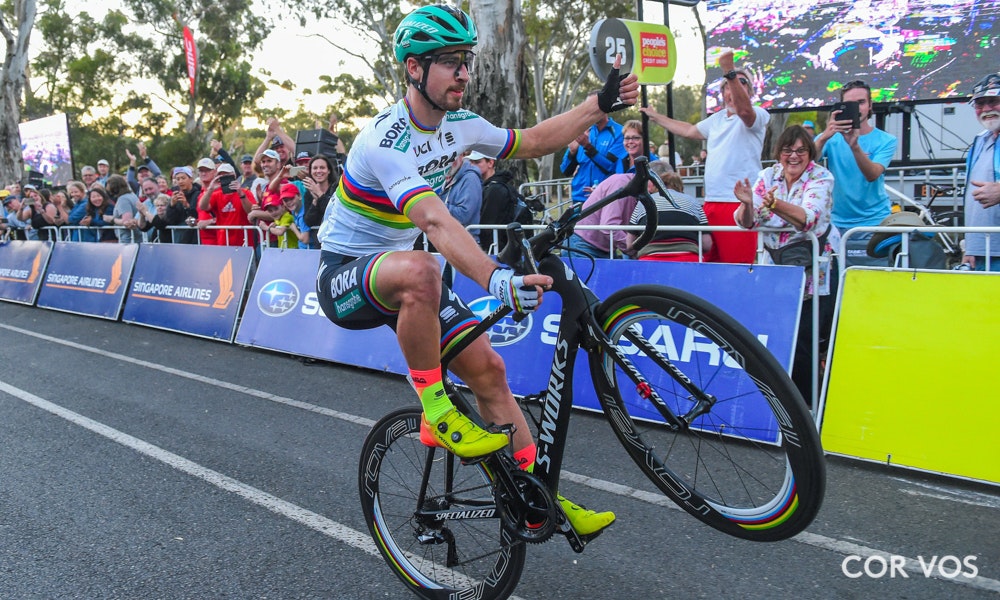 Sagan’s victory came as something as a surprise to the Slovakian. It’s his first race of the new season and he’s building towards bigger targets later in the year. “I didn’t expect that I could win,” Sagan said. “It was more about positioning [tonight].”

For Ewan, tonight’s third place came as a disappointment. He’s won the past two editions of the race, and he came into tonight with good form having won a third-straight criterium title last week.

“I think I started my sprint a bit too early and it was a bit more of a headwind than I thought it was going to be,” Ewan said. “When it started to go up a little bit I could really feel it. I just felt like I couldn’t get on top of the gear.”

But despite missing out on the win, Ewan is looking forward to the week ahead.

“I feel pretty confident and we have, for the sprints, the strongest team … a stronger team this year than in the last few years,” he said. “I’m really confident in them and like I said before I had a good Nationals so I’m confident in my form as well.”

Ewan won four stages plus the People’s Choice Classic at last year’s Tour Down Under, keeping Sagan winless for the entire week. This time around he won’t just have Sagan to contend with — Greipel and Elia Viviani (QuickStep Floors) have also made the trip out from Europe, ensuring one of the strongest sprint fields in the Tour Down Under’s 20-year history. 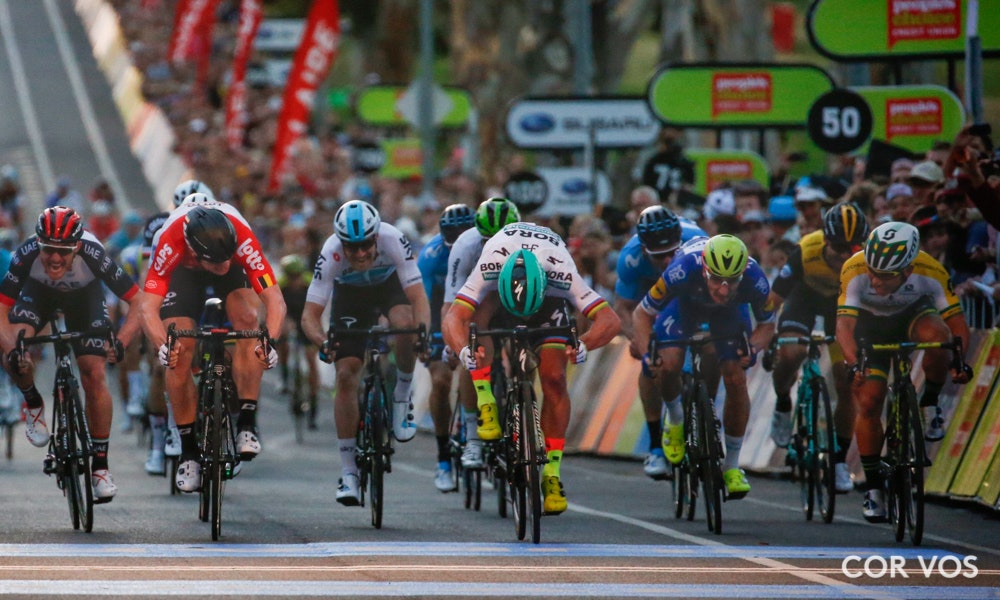 The early running in tonight’s curtain-raiser criterium was made by a breakaway that started with three riders, grew to five, and eventually became seven by lap 8 of 22: Tom Bohli (BMC), Fumi Beppu (Trek-Segafredo), Zak Dempster (UniSA-Australia), Jhonatan Restrepo (Katusha-Alpecin), Manuele Boaro (Bahrain-Merida), Tim Roe (UniSA-Australia) and Lachlan Morton (Dimension Data). The peloton allowed the seven leaders to get 50 seconds clear at one point, but with QuickStep Floors, Mitchelton-Scott, Bora-Hansgrohe, Sky and Sunweb all working on the front at different times, the escape was doomed to fail.

Bohli and Boaro rode away from their companions on lap 16 and Nathan Haas (Katusha-Alpecin) came across to join them. But the race was all back together on lap 18, setting things up for the expected sprint finish.

In the end it was a messy dash to the line with several riders bumping shoulders. Sky neo-pro Kristoffer Halvorsen was the only rider to crash, the 21-year-old Norwegian hitting the barriers on the right of the road and breaking his hand in the fall. He will miss the Tour Down Under as a result.

Sagan’s victory sets the scene for a fascinating week ahead. Of the Tour Down Under’s six stages, three are very likely to end in a bunch kick — stages 1, 3 and 6 — while stage 2, into Stirling, might also end in a similiar fashion (albeit with a tough uphill drag). It will be intriguing to see whether Sagan can claim further victories as the week unfolds, or whether Ewan and the remainder of the sprinters can bounce back.

Stay tuned for daily race-wrap ups thanks to our friends at Bolle as the race unfolds!

You can shop a wide range of Bolle products right here on BikeExchange.