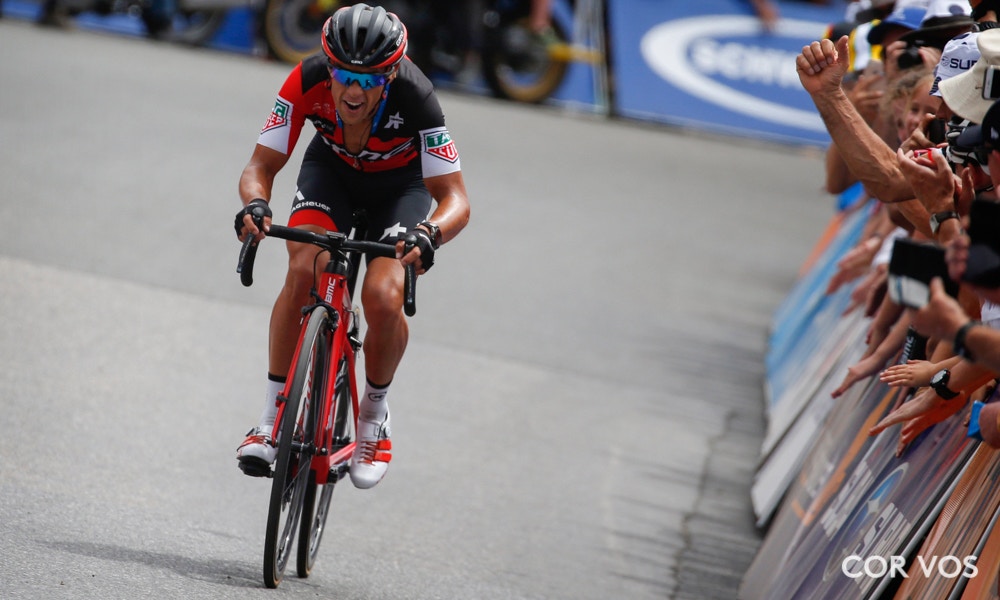 WILLUNGA HILL, Australia (CT) – It was no great surprise when Richie Porte (BMC) attacked on Willunga Hill and went on to win stage 5 of the 2018 Santos Tour Down Under. It was a surprise when Daryl Impey (Mitchelton-Scott) finished so closely behind — so close in fact that the South African would end the day in the ochre leader’s jersey.

It was a close-run thing though — Impey and Porte ended the day with the same overall time. A countback would be required to determine the leader — and in all likelihood, the winner — of the Tour Down Under.

Impey had started the stage 12 second ahead of Porte. Porte won the stage solo, eight seconds ahead of Impey. Porte’s win earned him four more bonus seconds than Impey’s second. With the riders then tied, Impey and Porte’s placings on the previous stages were each added together. Impey’s total of 38 gave him the overall lead ahead of Porte’s 150.

The stage had unfolded much as expected. A breakaway got up the road and built a manageable lead that never threatened to upstage the GC contenders. The bunch was thinned down by the first ascent of the 3km Willunga Hill — and some crosswinds — leaving a reduced peloton to tackle the second ascent to the finish line.

Overnight leader Peter Sagan (Bora-Hansgrohe) was dropped early in the climb, his time in ochre coming to an end. And then, much like he did in the past four years, Porte attacked 1.5km from the finish. Only Jay McCarthy (Bora-Hansgrohe) was able to follow, but 1km from the line Porte surged again and left his compatriot behind, riding to yet another Willunga win.

“I tell you what, that’s the hardest one to win so far,” Porte said. “Such a hard lead-in at the bottom when Cannondale [ed. EF Education First-Drapac] put it in the gutter. I felt great; the guys looked after me all day, but it hurt so much.”

Behind Porte, Impey was making his way through traffic and riding his way into the overall lead.

“When Richie went I knew that it was out of my depth to follow — he’s one of the world’s best,” Impey said. “I think it was important just to conserve as much as I could.

“There were a lot of strong climbers even behind and they were playing a few games against each other … and I kind of used that to my advantage. They were just dragging me the whole way up.

“Once I saw Jay I thought ‘Well there goes the podium, so I might as well get close to Jay.’ Ulissi gave a big turn to try and drop me and then I actually went off that and surprised myself. And then coming to the line I saw five six [seconds]. I thought ‘Geee, I must be pretty close here — better sprint it in.’

“It was fantastic. To be on the same time as Richie is pretty special.”

For Porte, it was a day of mixed emotions. Satisfaction at having conquered Willunga once again. Frustration at having come so close to overall victory and becoming the first rider to win back-to-back Tours Down Under.

“I’m happy with where I am, all things considered,” Porte said. “I had a tough … end of last year so to be up here and win Willunga for a fifth time in a row — I have to say I’m happy but of course I’d have loved to have won the overall.”

There is, of course, one stage remaining in the race — a 90km circuit race in the heart of Adelaide. But Porte has dropped any pretence — he knows he has little chance of taking bonus seconds at the intermediate sprints or finish line tomorrow.

“Daryl’s quick,” he said. “He’s been second two times in stages against guys like Sagan. Realistically I don’t really have a chance to move up because if I start going, Caleb Ewan and guys like this are going to go for the intermediates as well.

“I mean, look: if I was good enough to win I would have won it today on Willunga. Hats off to Daryl. He’s a good mate, a fantastic bike rider. I think I have to be happy with second to be honest.”

For Impey, victory isn’t yet assured, but he agrees with Porte’s assessment.

“I’m feeling confident barring anything happening,” Impey said. “Obviously if Richie wants to have a go for the sprints we’ve got Caleb and Edmo [Alex Edmondson] and myself to try and beat him for the sprints. But I think he’s got his work cut out for him in that way.

“But you know, cycling’s a funny sport and things can happen so I’m not counting my chickens before they hatch.”

Mitchelton-Scott had come into the race saying they weren’t focusing on GC; that the sprints were the goal with Caleb Ewan. Impey admitted that was only half true.

“We came with objectives for Caleb for sure but we kept it quite quiet and on the down-low that I was going to target GC,” he said. “I put quite a bit to work back in South Africa and this really was a target for me this year, but we tried to keep it on the down-low.

“It’s just fantastic to have the team support me like the way they did, to commit for Caleb and for me that’s special.

“I’ve been always a loyal lieutentant to Gerro [former teammate Simon Gerrans] here in the race and he’s always been in this position. So to actually feel it as well and to lead the race and to have the boys support me the whole week, it’s just been fantastic.”

While he’ll be focused on maintain his overall lead on tomorrow’s final stage, Impey also has another important job.

“Jersey or no jersey, the objective tomorrow is for Caleb to win,” Impey said. “We come to win every race we ride in Australia and every race we do so it doesn’t change anything for me tomorrow. Work is work and we know that with Jack Bauer not being here tomorrow [ed. Bauer was a DNF on stage 5] we’re one man short. Everyone has to chip in.”

The break went from the gun as the riders rolled out of McLaren Vale to begin today’s stage 5 of the Tour Down Under. Thomas De Gendt (Lotto Soudal), KOM leader Nicholas Dlamini (Dimension Data), Mads Wurtz Schmidt (Katusha-Alpecin), Scott Bowden and Zak Dempster (UniSA-Australia), Nuno Bico (Movistar) and Fumi Beppu (Trek-Segafredo) were let go and built a lead that peaked beyond five minutes after roughly 21km of racing.

Bico crashed in the break and required attention from the race doctors, but the Portuguese rider was able to resume his place at the head of the field.

Paddy Bevin (BMC) spent several hours on the front of the peloton, keeping the break in check as the kilometres ticked by. Bahrain-Merida and UAE contributed to the chase at various times, but it was mostly Bevin that did the work. In the break, Beppu took the first intermediate sprint while De Gendt took the second.

When the leaders hit the base of the first Willunga ascent they had roughly 1:40 between themselves and the peloton. The break splintered as soon as the climb began. Dlamini set off in search of KOM points with De Gendt and Bowden in tow.

Bowden was soon dropped, leaving Dlamini and De Gendt out front. De Gendt rolled past the South African just before the line to take the 16 KOM points on offer but Dlamini’s second place was enough to lock up the KOM jersey.

De Gendt went solo at the top of the hill, with roughly a minute between he and the peloton with 22km to go. He would be caught just under 10km from the finish.

On the flat roads between Willunga ascents EF Education First-Drapac tried to split the field in the crosswinds. They succeeded in catching Porte, Sagan and McCarthy out of position, but all three were able to rejoin the lead before the final ascent.

Porte’s teammate Rohan Dennis set a high tempo on the front as the climb began, shelling riders from the group. But it wasn’t until Porte’s attack with 1.5km to go that the race was really torn apart.

Sunday’s final stage of the Tour Down Under comprises 20 laps of a 4.5km circuit in the heart of Adelaide and should end in a bunch sprint. Dlamini has sewn up the KOM classification, Egan Bernal (Sky) will win the best young rider classification, Sagan should win the points classification (assuming he features in the sprint finish) and Bahrain-Merida should take out the teams classification.