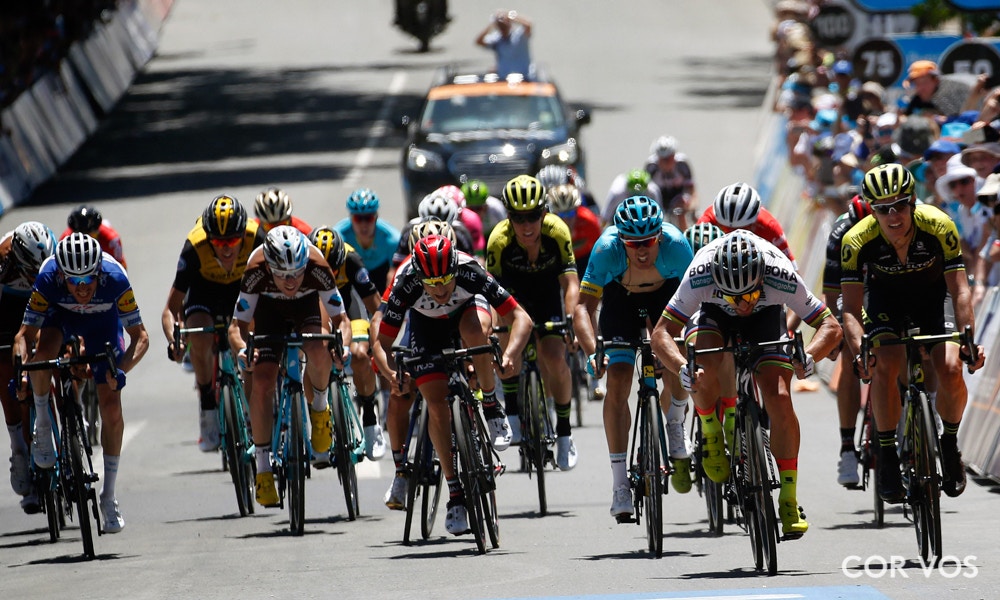 URAIDLA, Australia (CT) – Peter Sagan (Bora-Hansgrohe) might have bigger targets later in the season but today, on stage 4 of the Santos Tour Down Under, the world champion showed he’s a force to be reckoned with at any time of year.

As temperatures soared to 42ºC in the Adelaide Hills, Sagan clung to an elite lead group that emerged at the top of the final climb of the day, 8km from the finish. Four-time Tour Down Under winner Simon Gerrans (BMC) had set a stifling tempo on the front of the bunch, shelling all but roughly 30 riders, but Sagan was able to hold on and set up a thoroughly impressive victory.

The lead group fractured and reformed in the undulating run-in to the finish as several riders attacked and were subsequently caught. In the end, it was a 35-strong bunch that reformed in the closing kilometres into Uraidla, before Sagan outgunned Daryl Impey (Mitchelton-Scott) and Luis Leon Sanchez (Astana) to take his first career stage win at the Tour Down Under.

“I’m very happy and it’s very great for us, for our team,” Sagan said afterwards. “My teammates did a very great job during the whole day. It was very hot weather and it was very hard to concentrate in the race and the feeling was a little bit different.

“I think in the last climb it was not about legs any more — it was more about suffering in the heat and cooling down with cold water.”

Sagan admitted after the stage that he’d surprised himself by being able to stay with the leaders over the final ascent.

“A little bit yes, because I didn’t expect I could climb like that in this period [of the season],” he said. 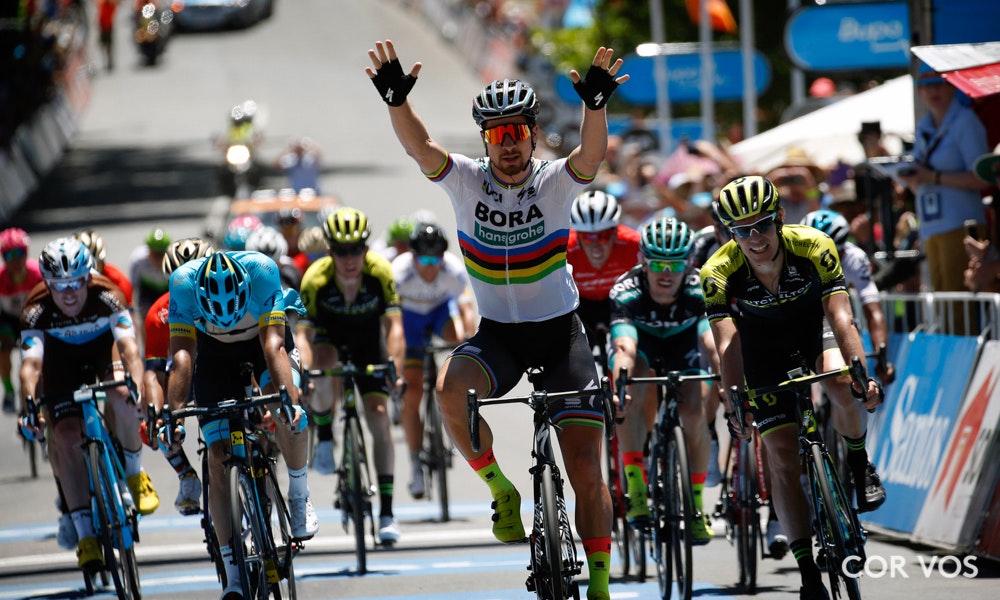 The result is a 2018 Tour Down Under that is intriguingly poised ahead of stage 5’s now-traditional uphill finish on Willunga Hill. Surviving Willunga is not beyond an in-form Sagan, but the Slovakian doesn’t believe he’s up to the task; at least not at this time of year.

“I think I am still not in 100% condition,” Sagan said. “We all know why we are here — we are here to support Jay and it’s going to be a very important day for him. [We will] try to do our best to help him to be in the front.”

For Porte, the winner of the past four Willunga stages, today’s stage didn’t go as well as he might have liked. He’d felt unwell overnight and “empty” during the stage. Despite that, he’ll still be the favourite to win on Willunga tomorrow, for the fifth year running.

To win the race overall Porte will need to take back time on his rivals on the 3km stage-ending ascent, including 15 seconds on Sagan. Time bonuses of 10 seconds (first), six seconds (second) and four seconds (third) are available on the line. While Sagan is ruling himself out of contention, Porte is wary.

“It’s not a terribly long climb,” Porte said, ”so if Sagan’s on such good form then he’s also a danger.”

But perhaps Porte’s greatest challenge will come from elsewhere. Impey currently sits 12 seconds ahead of Porte, McCarthy is five, Sanchez is two, and several big riders are on the same time as the Tasmanian.

But, if Porte shows the sort of form on Willunga he has the past four years, he’s likely to walk away as the overall winner of the 2018 Tour Down Under and the first rider to win consecutive editions of the race.

Another day, another breakaway for UniSA-Australia. Scott Bowden was given a rest on stage 4; instead it was Alex Porter and Zak Dempster that got up the road for some TV time.

The duo built the biggest lead of the race so far — roughly nine minutes after 35km of racing. A brief move from the bunch by Lotto Soudal pair Andre Greipel and Thomas De Gendt was neutralised around the same time.

Dempster took the points at the first intermediate sprint ahead of Porter, while stage 3 winner Elia Viviani (QuickStep Floors) mopped up the one remaining bonus second (and two points towards the sprint classification).

Mitchelton-Scott spent the most time on the front of the bunch, gradually bringing the break back as the day wore on. At the second intermediate sprint Porter took maximum points ahead of Dempster while Viviani again sprung from the bunch to take the remaining points and seconds.

With 58km to go Bora-Hansgrohe committed to the chase and the gap started to shrink rapidly. It was down within five minutes with 50km to go as Porter struggled to stay with his more experienced teammate out front.

Dempster went it alone with roughly 45km to go as the gap hovered just above three minutes. The bunch got the Victorian within sight but Dempster was allowed to re-extend his lead as the riders swung back towards Adelaide for the final kilometres of the race. Katusha-Alpecin, Astana and Sky all came to the front as the pace increased, with Dempster eventually caught with 18.7km to go.

Sky and EF Education First-Drapac came to the front as the day’s only classified climb, Norton Summit, approached. As the ascent began, roughly 13km from the finish, Miles Scotson (BMC) came to the front and started to ride a hard tempo. He was soon replaced by teammate and four-time Tour Down Under winner Simon Gerrans who rode a stifling pace up the 5.2km ascent.

As the climb wore on more and more riders were dropped, leaving roughly 30 riders in the lead group by the top of the climb. Notably absent was Nathan Haas (Katusha-Alpecin) who would go on to finish nearly a minute behind the lead group. A late surge on the climb from Richie Porte saw the Tasmanian take maximum KOM points.

The undulating section between the top of the climb and the finish prompted a flurry of attacks from those within the lead group. Lars Bak (Lotto Soudal) chanced his arm unsuccesfully, as did Brendan Canty (EF Education First-Drapac). Domenico Pozzovivo (Bahrain-Merida) and George Bennett (LottoNL-Jumbo) were also on the move, likewise Michael Valgren (Astana).

The most promising move came from Sagan himself, who attacked on a steep descent with roughly 3.5km to go. The world champion opened a gap before being joined by four others.

But in the final 2km of the stage the leaders would be caught, creating a group of 35 at the head of the race. It was a narrow and technical finish into the town of Uraidla, and it was Sagan that overhauled Impey to win the stage and the ochre leader’s jersey.

Tomorrow’s fifth stage of the 2018 Tour Down Under is 151.5km long and includes three laps of a big circuit around Willunga, before two ascents of the Willunga Hill climb.