Tour Down Under Stage One Race Recap 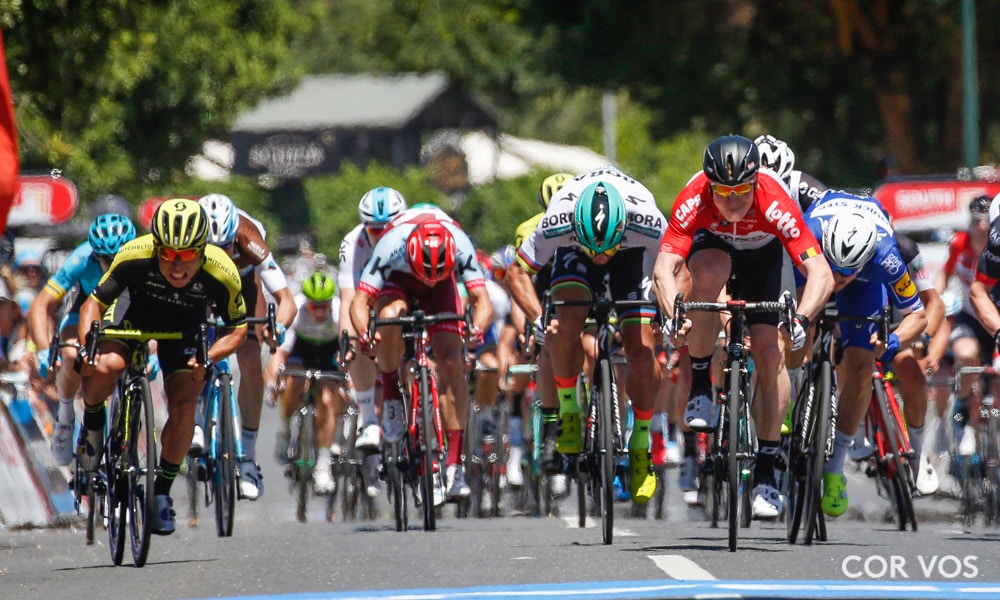 LYNDOCH, Australia (CT) – The 2017 season was Andre Greipel’s worst on the bike since 2007. The Lotto Soudal sprinter went winless at the Tour de France — his first GrandTour without a stage win in 10 years — and ended the season with just five victories to his name. He’d lost confidence in his ability to sprint, and to win. Off the bike, his personal life was rocked by the death of his mother after a long illness.

But so far in 2018, in cycling at least, things appear to be heading in the right direction for the German powerhouse. Greipel sprinted to a impressive victory on Tuesday’s opening stage of the 2018 Santos Tour Down Under, earning himself the race’s first ochre leader’s jersey in the process.

Greipel overhauled Caleb Ewan (Mitchelton-Scott) and Elia Viviani (QuickStep Floors) in the closing metres of the sprint and held his position to take a record-extending 17th stage win at the season’s first WorldTour race. Ewan finished second while the fast-finishing Peter Sagan (Bora-Hansgrohe) snuck past Viviani to complete the podium.um.

Greipel hopes that today’s victory will pave the way for a strong season ahead.

“A win is a win so I’m happy that it turned out like that,” Greipel said. “To start the season with a win is always something good for the team, for myself.”

Greipel went nearly five months without a victory last season, between his stage win at the Giro d’Italia in early May and his win at the Omloop Eurometropol in late September. He struggled with his confidence during that time, telling the press in August that “I’ve completely lost my instinct on the bike.” He regrets those comments somewhat now, but is heartened that he’s been able to find his way back to the winner’s list.

“Sometimes you have ups and downs,” said Greipel. “It was a big disappointment in the Tour and then you say stupid things, but I will never lose that.

“It’s nice when you’re 35 and everybody tells you you will get slower. I don’t feel that and I really like to race my bike.” 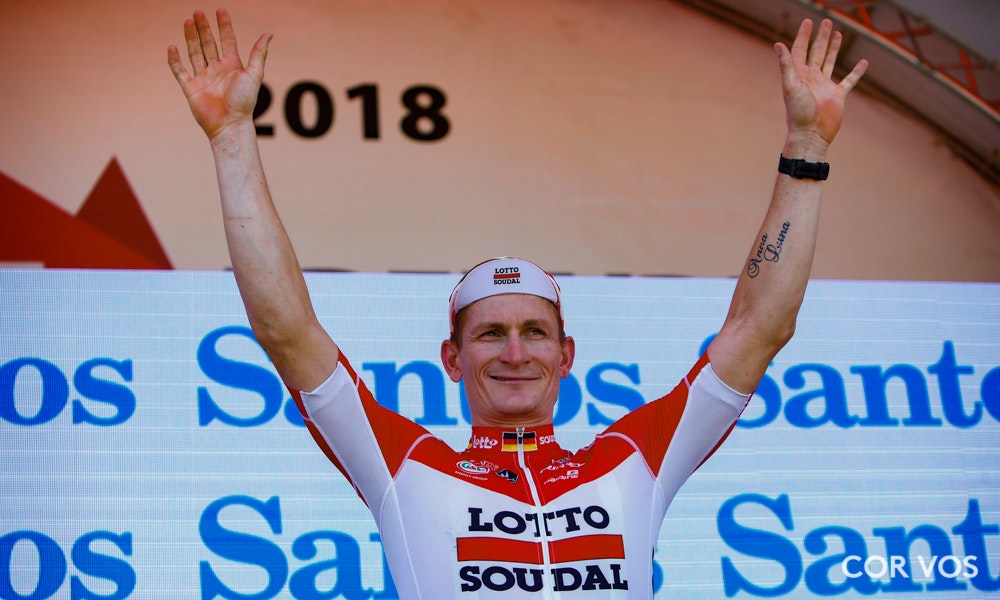 Greipel’s Lotto Soudal teammates didn’t make a meaningful appearance at the front of the peloton on today’s stage, instead opting to leave the work to others. That was by design — with Bjorg Lambrecht missing the start of the race due to complications with the sport’s anti-doping rules, Lotto Soudal started the race a man short.

“We started with six before the race started so we left the work for the other teams today because it was quite hot out there,” Greipel said. “When it turns out like that I think we made the right choice today.”

While Bora-Hansgrohe and QuickStep Floors contributed to the pacemaking throughout the day it was Mitchelton-Scott — and more specifically Damien Howson — that spent the most time on the front of the peloton. The Australian team’s sprinter, Caleb Ewan, hit the front early as the bunch thundered into Lyndoch, aiming to replicate the stage win he took in the same town the past two years. But faced with a stronger sprint field than in previous years — including a resurgent Greipel — Ewan wasn’t able to hold on.

Ewan hopes to make his Tour de France debut in 2018, a race where he’ll certainly come up against the best sprinters in the world, all of them in peak form. While Ewan was disappointed not to take his seventh Tour Down Under stage win today, he was able to take positives from the result.

“Like I’ve said before, the sprint field here is better than it has been the last few years,” he said. “I’m happy for it to be like that because I am going to be racing these guys in some of the more serious races coming up so it’s good to get a feel of how they sprint.

“I’ll be analyzing these sprints and seeing where their weaknesses may be and [how] I can improve against them.”

The first stage of the 20th Tour Down Under began in Port Adelaide and headed out to the Barossa Valley for laps of a finishing circuit around Lyndoch. Three riders — Will Clarke (EF Education First-Drapac), Scott Bowden (UniSA-Australia) and Nickolas Dlamini (Dimension Data) — slipped off the front in the opening minutes of the stage, quickly building a lead that peaked at 4:50 after just 10km.

“It wasn’t a hard move to get into today — I managed it pretty easily,” said Clarke. “The goal actually was to try to get the KOM jersey, which I made a pretty big blunder of chasing.”

The day’s only classified climb came after 39km, at which point the three leaders started attacking one another. Bowden surged early, twice, while Clarke left his run too late.

“I sort of waited a bit too long and then totally stuffed it up really,” admitted Clarke. “It was a bit annoying.”

Dlamini was first across the line, ensuring he will wear the polka dot jersey of KOM leader on stage 2. 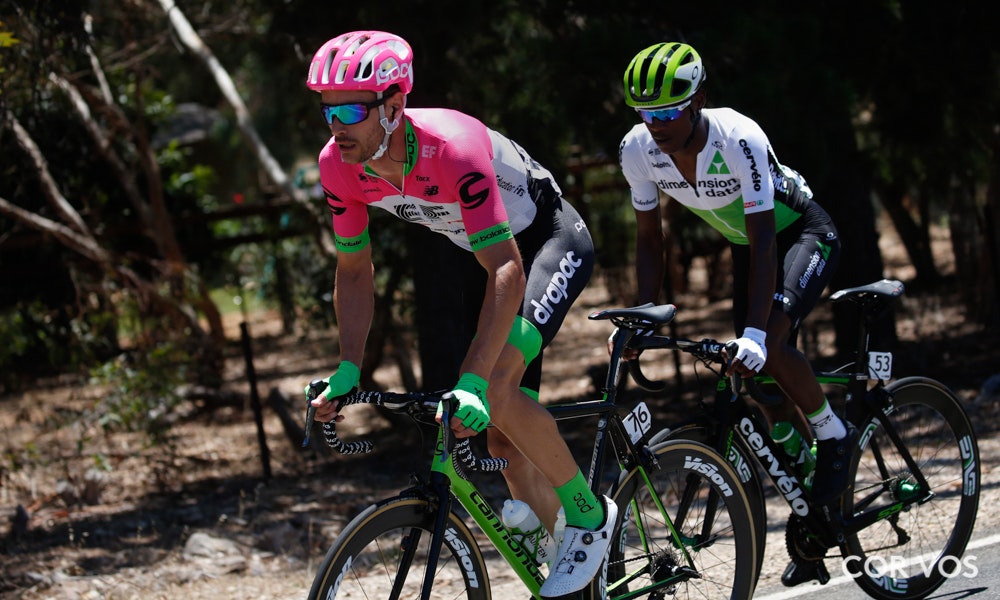 Bowden dropped back from the lead group over the top, leaving just Dlamini and Clarke out front. The pair forged on together until roughly 30km to go, at which point Clarke set off on his own.

The Tasmanian started the final of three, 26.5km closing laps with an advantage of 1:40 over the peloton but his time out front was always going to be limited. Clarke was caught with just under 10km to go as the teams of the sprinters jostled for position ahead of the sprint finish.

While the main sprinters were able to contest the finish as expected, FDJ’s Daniel Hoelgaard crashed spectacularly into the barriers on the final corner. At the time of writing Hoelgaard’s team hadn’t provided any information about the 24-year-old’s condition.

Time bonuses at the finish line give Greipel a four-second lead at the top of the general classification going into stage 2. Ewan is second while Clarke is third, having taken three bonus seconds at both of the day’s intermediate sprints.

Nathan Haas (Katusha-Alpecin) and Jay McCarthy (Bora-Hansgrohe), meanwhile, confirmed their GC ambitions by fighting for the one-second time bonus available for third at the second intermediate sprint (behind the two breakaway riders). Haas took the sprint ahead of McCarthy and he is now the highest-placed of the GC contenders in sixth place, nine seconds down on Greipel.

Wednesday’s stage 2 of the 2018 Tour Down Under is a 148.6km effort starting in Unley and finishing with a tough uphill drag into Stirling.