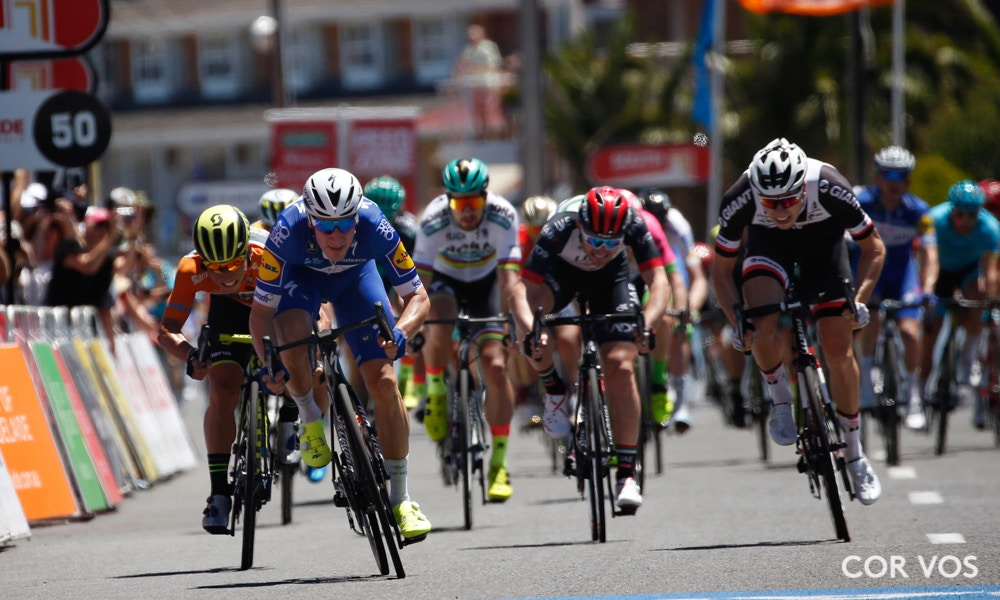 VICTOR HARBOR, Australia (CT) – It’s been dubbed the best sprint field in Santos Tour Down Under history and so far that field has delivered. After four sprint finishes in the race’s 20th edition (including the People’s Choice Classic criterium), each of the four big-name sprinters has a win to their name..

The most recent addition to the winners’ list is the Italian Elia Viviani (QuickStep Floors) who surged to victory on stage 3 today.

On a stage that was shortened by 26km due to temperatures beyond 40ºC, Viviani burst past overall race leader Caleb Ewan (Mitchelton-Scott) and was able to hold off Phil Bauhaus (Sunweb) to take his first victory in QuickStep Floors colours. 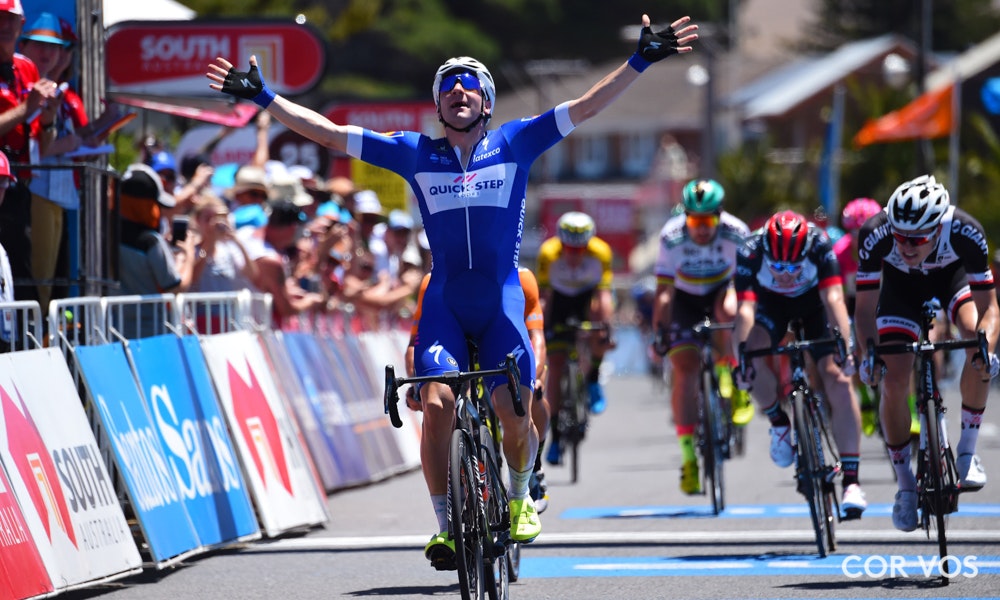 For Viviani and his new team, there was a sense of inevitability about the day’s result.

“Already from the criterium we understand we can win one stage, and that is the goal we have this week,” Viviani said. “We need just two, three days to understand how we do the lead-out and to have the good feeling with the teammates.

“I think yesterday in Stirling was a good sign for me because you see me try in one finish [that’s] a little bit harder for me but I’m really determined and finally today we got this win.”

The team rode the closing kilometres of stage 3 during reconnaissance in an attempt to give themselves the best chance of victory. That preparation paid dividends in what was a reasonably technical finale.

“It’s not an easy finish to prepare,” Viviani said. “We do the recon last week and we understand these two corners, also the roundabout 1.2km to go, is the [crucial] point where we need to be in the front.

“I asked my guys to be in the top 10 in the last corner and after the last corner I think we are eighth or ninth with Michael Morkov. The last straight is really open and really good road to come up from the back. Morkov took me out and then when I see 200m I say ‘Ok, now or nothing’.

While Viviani and his team rode the finale well, they were also the beneficiary of a mistake from Ewan. After a stellar lead-out from his Mitchelton-Scott teammates, Ewan was in prime position to sprint to his second straight stage victory. But the 23-year-old hesitated at the crucial moment, allowing Viviani to fly past and snag the stage.

“I’m really disappointed in my sprint to be honest,” Ewan said. “I hesitated in the end and that really cost me. I had a perfect lead-out from the boys so I’m disappointed to end that lead-out with a loss.”

While there was a cross-tailwind blowing in the finishing straight, Ewan was expecting a block headwind. As a result he left his sprint later than he might have done.

“I really didn’t want to go too early and have another sprinter on my wheel and get rolled at the last minute,” Ewan said. “I really wanted to try to get my timing right and Elia got the jump on me and he was going a lot faster once I kicked so it was always going to be hard to claw him back in the last 100 metres.”

Early in the stage it was a case of deja vu as Nicholas Dlamini (Dimension Data) and Scott Bowden (UniSA-Australia) broke away from the peloton for the third time in as many days. The pair got as far as 5:30 ahead of the peloton as they approached the day’s only KOM point.

As he did on the previous two days, Dlamini won a spirited battle for the KOM points, ensuring the South African neo-pro will wear the polka dot jersey for the third day in a row.

At the first of the day’s intermediate sprints Sam Bennett (Bora-Hansgrohe) took the one bonus second on offer (behind Dlamini and Bowden), denying Nathan Haas (Katusha-Alpecin) and protecting the GC position of teammate Jay McCarthy.

Mitchelton-Scott and Lotto Soudal did the bulk of the work at the front of the peloton, eroding Bowden’s lead and keeping the lone leader dangling until the closing kilometres. The 22-year-old was caught with a little less than 20km to go, prompting a flyer from Tiago Machado (Katusha-Alpecin) 2km later.

The Portuguese veteran led the race for roughly 10km but was swallowed up as the sprint trains assembled ahead of the sprint finish.

Ewan’s second place on the stage sees him maintain his 10-second advantage in the general classification, with Viviani now in second place. Ewan’s teammate Daryl Impey is in third, another four seconds back, followed by a collection of fast finishers and GC contenders.

Ewan doesn’t believe he can retain the ochre jersey tomorrow, given the presence of a 5km climb that peaks 8km from the end of the stage.

“I don’t know if Whitey’s [sports director Matt White] going to want me to just sit up at the bottom or go as long as possible,“ Ewan said. “There’s no point in going too deep if I’ve not got a realistic chance of winning. We’ve got guys like Daryl that can do really well on that stage as well.”

Tomorrow’s stage looms as arguably the most intriguing of the race and one that’s likely to have a considerable impact on the general classification.

With temperatures set to hit 41ºC again, organisers decided to bring the start of the stage forward by an hour, to 10:30am. At the time of writing the stage will be run in its entirety from that point.