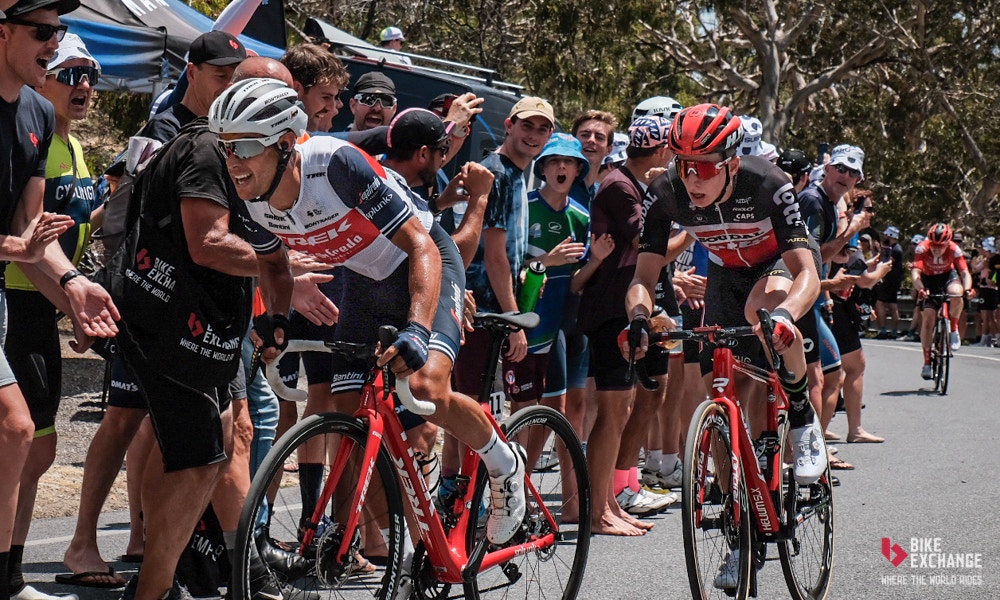 Trek-Segafredo came to South Australia with purpose: the team wanted to win the Santos Tour Down Under title. Richie Porte duly delivered on the promise – winning Subaru Stage 3, taking the Santos Ochre Leader’s Jersey and then losing it again before The Final Showdown. For the first time in seven years, he was beaten to the top of Old Willunga Hill but his second place was more than enough to claim the crown he last won in 2017.

Richie Porte achieved another overall victory in the Santos Tour Down, earning his first stage race title with the Trek-Segafredo team that he joined at the start of last year.

As we’ve come to expect, there was a massive cheer as he burst out ahead of the peloton with just over a kilometre to go and performed his trademark surge on an incline that has become part of Australian cycling folklore. All expect his attack and, when it comes, it’s an impressive reminder of the climbing strength he possesses. 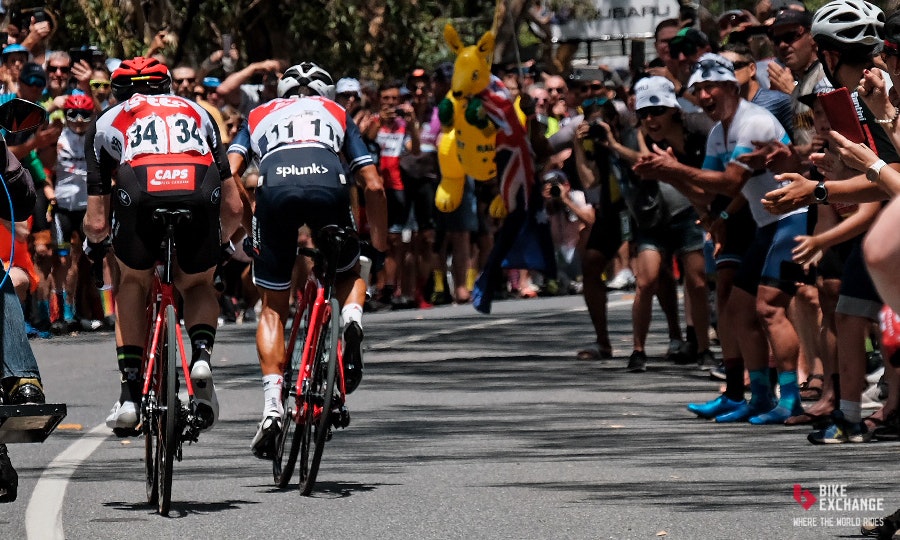 On this hill in January, there is nobody capable of matching his acceleration. He carries the weight of expectation but sheds that burden almost as quickly as he drops his rivals when he goes up this stretch of road in such a convincing manner that he’s practically earned naming rights for the incline. ‘Richie Porte Hill’ would be an appropriate title for he has won here so often and so convincingly that it seemed implausible that anyone else would ever throw a victory salute here when Porte is in the peloton.

This year he could afford to gamble a little for all he had to do was finish more than two seconds ahead of the race leader after five stages, Daryl Impey of Mitchelton-SCOTT. The South African champion is more a sprinter than a climber, but he has been able to limit his losses to Porte in recent years.

When Impey first won the TDU in 2018, he was second to Porte on Old Willunga, surrendering eight seconds to the stage winner. The two finished first and second overall; Impey the winner, Porte the runner-up but both with the same cumulative time. It was only a count-back on stage placings that earned Impey the victory.

Last year, the stage featuring ‘Richie Porte Hill’ was moved from being the penultimate stage (before a largely ‘ceremonial’ final day on the streets of Adelaide) to the final stage. Again, Richie danced away from his rivals. Still, Daryl refused to concede to the climber. And, for the first time in history, a rider won two successive titles. Could Impey earn three? It seemed possible, but unlikely. Even Mitchelton-SCOTT’s manager, Matt White, admitted that beating Porte in 2020 was going “to be difficult”, and ‘Whitey’ prides himself on ‘his’ team winning this race. 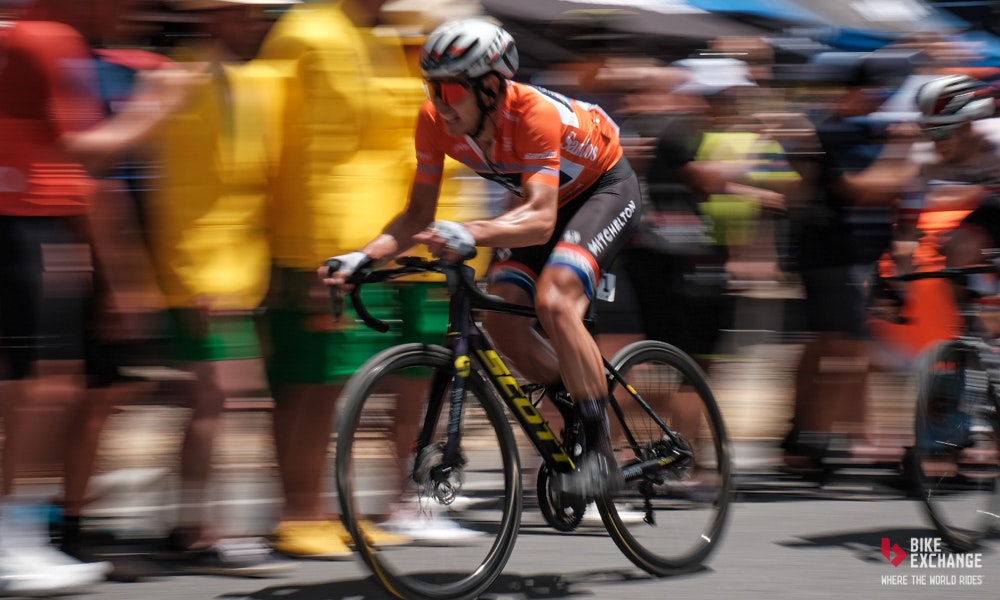 There was a small chance that Joey Rosskopf, the Subaru King of the Mountain in 2020, would pull off the ultimate coup. Had it been said that the American from CCC Team would rise from 32nd on GC to first before the stage, there would have been laughter and derision. What? Finish 58 seconds ahead of Porte? On Old Willunga?! ‘No chance’, would have come the chorus. But Rosskopf likes to attack. He is capable of climbing. And these two elements combined well in Be Safe Be Seen Stage 6 when he set off as part of a 26-strong group that worked up an advantage of five minutes while the bunch sped down past Port Willunga beach for the traditional early circuits of a stage that has always been a feature of the TDU.

After the first of two ascents of Old Willunga, Rosskopf and the breakaway enjoyed a lead of over two minutes. On the approach to the final climb of the 22nd Santos Tour Down Under, CCC still had the virtual leader. Could it be? For a few minutes, it seemed possible but then came the charge of the GC specialists.

The Tasmanian has been repeating his stage winning routine year after year, with team after team – Sky in 2014 and 2015, BMC Racing in 2016, 2017 and 2018, then with Trek-Segafredo in 2019… but then came a little surprise this January. Matthew Holmes interrupted proceedings a little today. In his first WorldTour race with the Lotto Soudal team, the 26-year-old from Wigan in Britain won the stage.

Holmes had been in the move with Rosskopf since the start of the day. His new team had issued its instructions, and he seized the opportunity to show what he could do when told to race for himself. “We also had both Matthew Holmes and Jonathan Dibben in the breakaway,” explained Herman Frison, the DS from Lotto Soudal. “We told Dibben, ‘You can go full, but Matthew just takes your bottles and wait a little bit and see about the final…’ “In the final, the bunch was always looking at each other,” continued Frison. “In the last lap [their lead] was 2:30, I said, ‘Yes, one from the break can go for the victory.’ “Then in the final, the chase was closing in fast, but he took the wheel (of Richie), and he took the victory.”

What a surprise: for the crowd, the commentators, the team, and even the rider. To win a WorldTour race for the first time is impressive. To drag race a rider like Richie Porte to the line and win? That the kind of result that gets a lot of attention. And the significance of the victory wasn’t lost on Holmes. “I tried not to sprint every time that they [accelerated],” said the 26-year-old. “Everyone’s got power meters, and you know everyone is on the limit, so I just rode hard and sensible and then just had to go with Richie when he came past. “He was obviously going a hell of a lot quicker than me up there, so he had no sprint left.” This explains the fact that Porte finally got beaten on ‘his’ hill. But the win still created a ripple in the crowd. 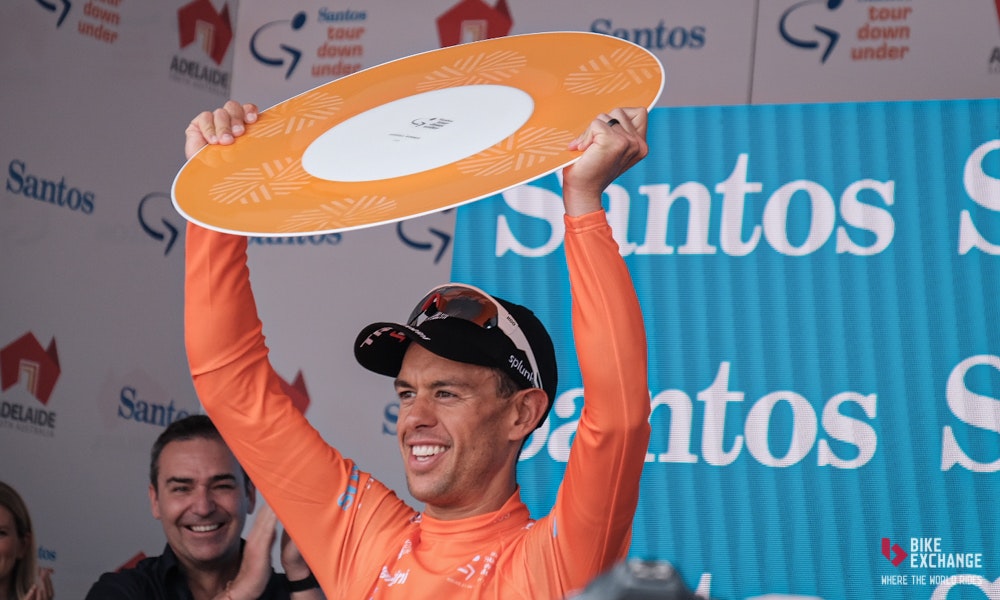 It’s easy to say that Richie Porte’s second title is a result everyone expected today. Given that he began the final stage of the 2020 race ranked second overall, only two seconds behind the winner of the previous two editions, Daryl Impey (Mitchelton-SCOTT) the expectation was that he’d do that again, take the 10-second bonus for the stage win and stroll away with the ochre jersey. It didn’t exactly go that way even if he rolled back down the hill with the Overall Santos Ochre Leader’s Jersey, a broad smile and, undoubtedly, a strong sense of relief. Porte did attack near his favourite spot. Everyone knew he would, including MitcheltonSCOTT’s Grand Tour winner, the impressive (yet injured) Simon Yates who quickly responded to the Trek-Segafredo leader’s acceleration. That happened at 1,050 metres to go.

It becomes easy to note the distance from the finish of Porte’s regular attack– this time it came when he looked up and saw the blue structure indicating one kilometre to go. While the attack didn’t yield a stage win this time, it did get the reward that Trek-Segafredo had been working towards all week. We’ll let the champion conclude this story with his observations of the finale of the last stage; the one won on his hill with an effort he’ll not forget in a while.

“There’s always little points where I hear the crowd,” said Porte once he’d arrived back at the race headquarters, the Hilton Adelaide, and answered questions from the media. “But unfortunately, I can’t really take it in.” “That last 800 metres today bloody hurt. It was probably the most painful 800 metres of my life. “You’ve got someone like Simon Yates sitting on your wheel [and] it’s not a given you’re going to drop him. So, I think that the crowds there today were just awesome, and it is electrifying to get to the top. “Obviously, you don’t get to take it in too much because you’re in a different world of hurt. But the crowds there are just second to anything really… it’s like a Tour de France stage, to be honest.”

There are recurring themes for Old Willunga, and Richie Porte’s attack is the most common. But, he was asked, does he realise what effect he has on this fantastic ‘stadium’ for cycling when he weaves his magic. It is, after all, like a tunnel of noise that he’s passing through. He may not realise it because he’s in there amongst the cheering. From the top, however, it’s possible to track his progress as the roar of the crowds announce his pending arrival at the top.

“I’ve heard that from people,” said Porte. “It’s maybe a little bit like when Cadel (Evans) attacked in the Geelong worlds (in 2010). You could hear all the Aussie fans cheering. “I think the Willunga stage is a great day for Australian cycling.”

This article originally appeared on tourdownunder.com.au 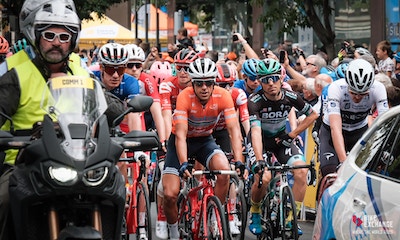 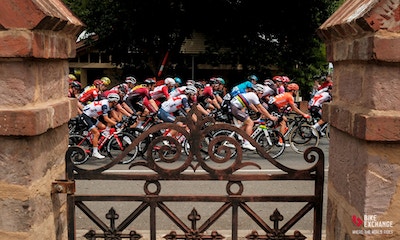