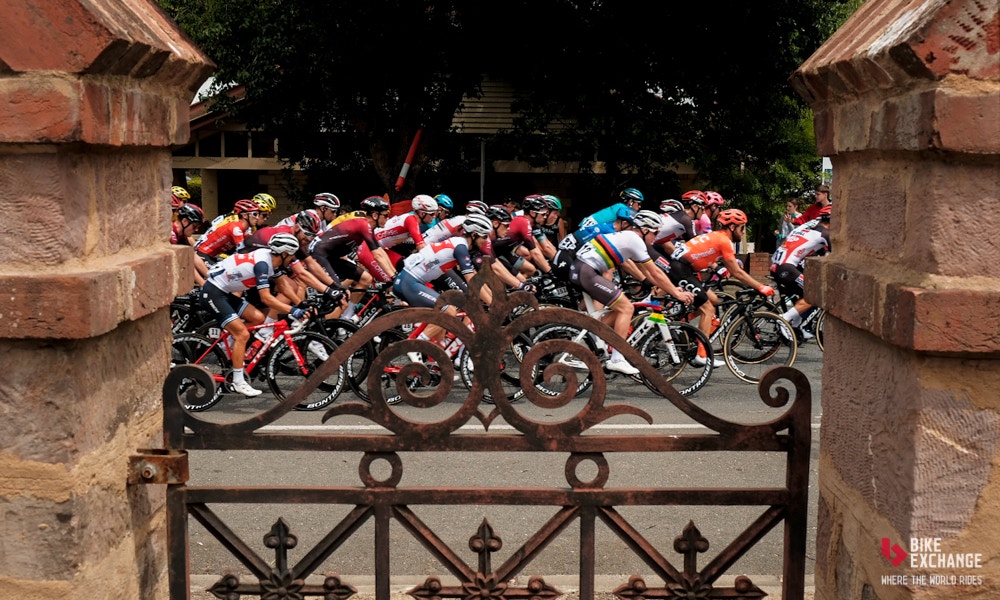 STIRLING, Australia (CT) – The pocket-rocket Caleb Ewan (Lotto-Soudal), has opened his account for 2020, taking out a tight uphill sprint to close out Stage Two of the 2020 Tour Down Under.

The eighth win of his career at the Tour Down Under, Ewan made the most of a reduced bunch gallop to the line after a crash with just 1.5km to run took over half the remaining peloton out of the running. On the run in to the finish, Mitchelton-Scott looked to have things under control with Lucas Hamilton and Cameron Meyer both putting the hammer down. Daryl Impey (Mitchelton-Scott) was the first to jump, opening up his sprint with 250m to run, Nathan Haas (Cofidis) followed closely in his wheel but was unable to ride around the defending champion. Over to the left-hand side of the road, Ewan surfed the wheels of the Deceunink-Quickstep lead-out train, picking his way through past his rivals in Sam Bennett (Deceunink-Quickstep) and Elia Viviani (Cofidis), before opening the taps. By the line, it would be Ewan by five lengths back to Impey with Australian Nathan Haas rounding out the podium in third. 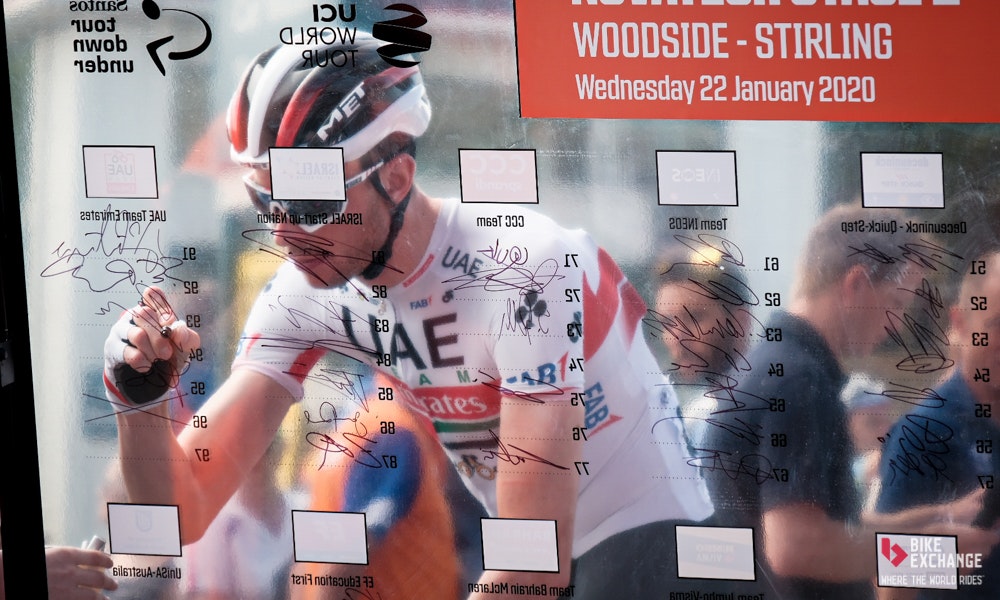 Stage Two of the 2020 Tour Down Under saw the race head into the recently fire-ravaged Adelaide Hills for the first time in this year's edition. The 135.8km stage saw the peloton take in four loops around the starting down of Stirling before traversing across the backside of the Adelaide Hills to complete three circuits around the finish in Stirling.

In stark contrast to the sedate start to yesterday's stage, the race was on from the flag drop on Stage Two with a two-man break consisting of Joey Rosskopf (CCC Team) and Sam Jenner (UniSA-Australia) jumping clear at kilometre zero. The pair were joined by Laurens De Vreese (Astana Pro Team) and Omer Goldstein (Israel Start-Up Nation). No further riders attempted to bridge across, with the peloton seemed content to let the break ride up the road, albeit on a controlled leash. 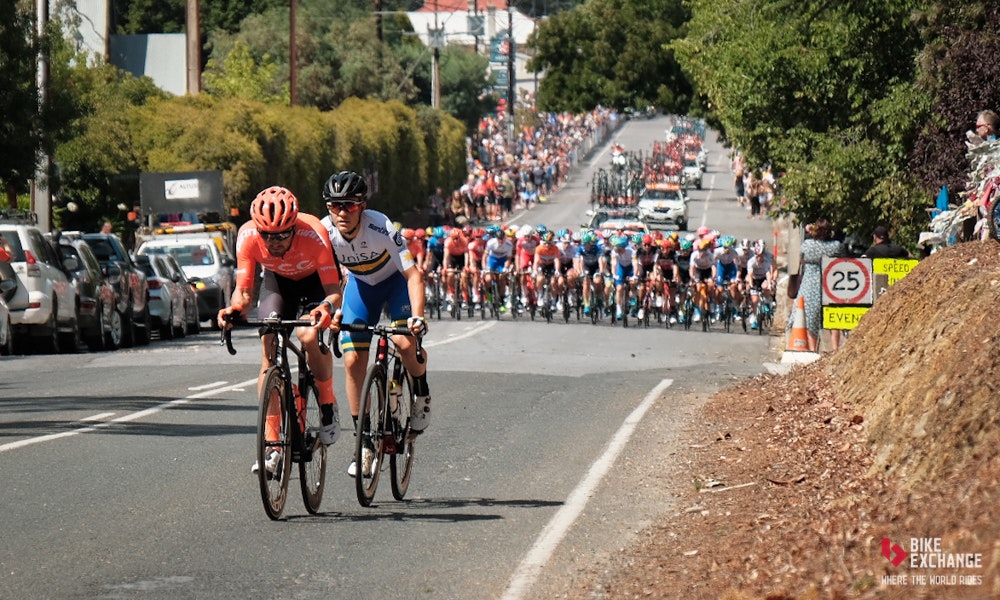 As the peloton seemingly maintained a 2-minute gap to the escapees, the four riders managed to stay ahead of the main bunch for the majority of the day, with Joey RossKopf taking both KOM segments, cementing his lead in the Polka Dot jersey competition. The first sprint point of the day was taken out by the breakaway, with Omer Goldstein taking his teams first WorldTour result with an intermediate sprint victory ahead of Sam Jenner.

With 42km to go, as the gap closed down below 30-seconds, hoping to steal line honours on the day, Laurens De Vreese soloed away from his fellow escapee’s to take the final sprint point of the day. Back in the main bunch, the other three breakaway riders had been absorbed by the peloton. Jay McCarthy sensed the moment, jumping out front of the peloton to take second, snagging himself a precious two bonus seconds in the process. At the same time, George Bennett (Jumbo-Visma) followed the Australian across the line in third, taking an all-important bonus second on his GC rivals.

As riders fanned out across the road with 27km to go, shoulder to shoulder contact resulted in a slow-speed crash taking out Simone Consonni (Cofidis), lead-out man for Elia Viviani and Michael Delage of Groupama FDJ. Further up the road, De Vreese was finally absorbed by the main bunch with 25km to go the race was all together. With just one 21km circuit around Stirling remaining, there was sure to be fireworks on the final lap. 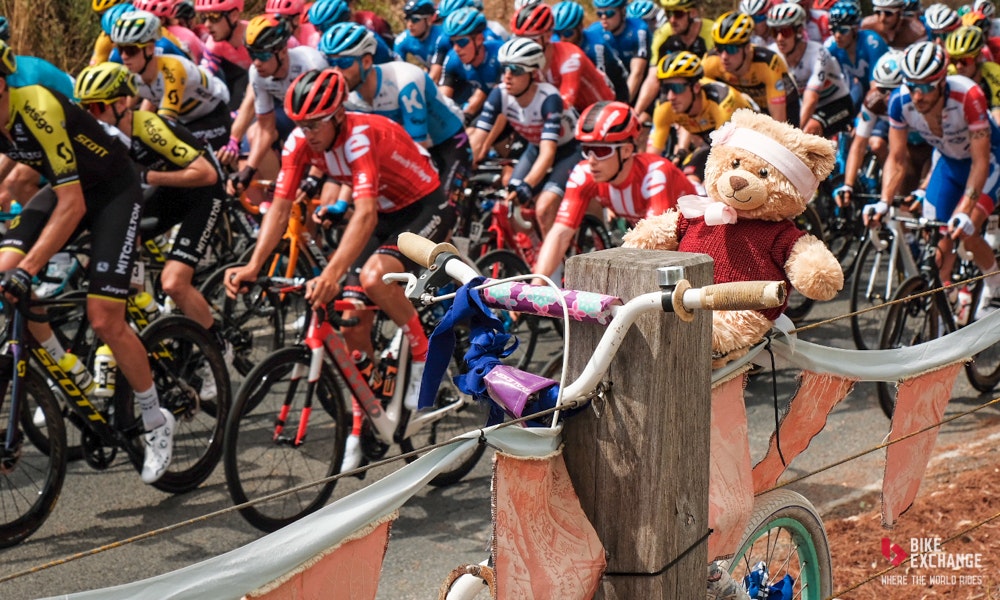 The peloton did not disappoint, noticeably lifting the intensity on the descent out of Stirling on the final loop. Rohan Dennis (Team Ineos) was seemingly the first casualty, suffering a front flat on the descent. Luke Rowe (Team Ineos) joined the Australian in an attempt to join back with the peloton, who by this rate was shelling riders at a riders rate knots. The pair finally hit the rear of the bunch with just 10km to go after Rowe set a stomping tempo.

With six kilometres to run, Mitchelton-Scott moved to the front of the peloton, driving the pace in an attempt to deliver team leader, Daryl Impey, safely to the line. The turn of speed from Luke Durbridge (Mitchelton-Scott) significantly thinned out the peloton. However, several noted sprinters including Elia Viviani, Caleb Ewan and [Stage One] victor Sam Bennett (Deceunink-Quickstep) refused to be dropped, hanging tough with the bunch.

With just 1.5km to go a crash in the peloton thinned out the bunch significantly, setting up a reduced bunch sprint for the finish. In the end, though, Caleb Ewan proved too strong on the uphill sprint to the finish, riding around a fading Daryl Impey and Nathan Haas to take line honours.

Stage Three looks set to be arguably to most pivotal of the whole race. The uphill finish into Paracombe has decided the winner the last two-times it has featured and importantly, gives the climbers their first shot at a victory.

Race video courtesy of Tour Down Under and Channel 7 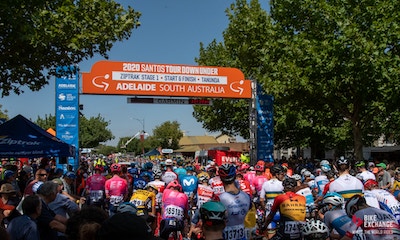 A flying Irishman took line honours on Stage One as the 2020 UCI WorldTour kicked off around the South Australian town of Tanunda...