Interview: Trek’s Travis Brown on the state of wheel dimensions 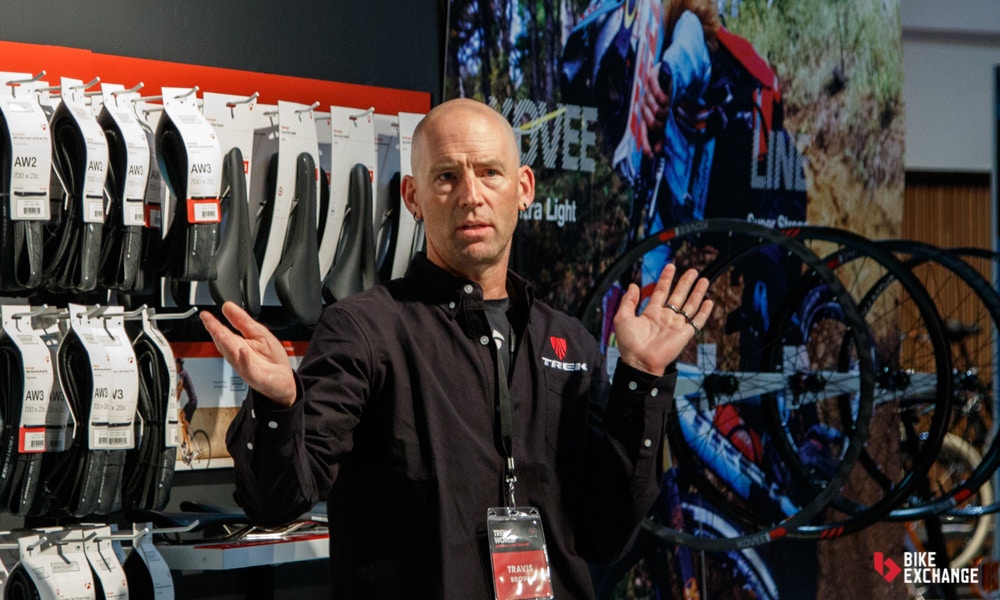 There are a number of names in the cycling industry that long-time cyclists just know. As a former mountain bike Olympian, inductee into the Mountain Bike Hall of Fame and product development boundary pusher – American Travis Brown is such an example.

After fourteen seasons as a pro where he raced mountain, cyclocross and dabbled in road, Brown continues to ride nearly everyday in his hometown of Durango, Colorado. While race plates still get tied to his handlebars, much of his pedaling is spent testing and refining the product that may or may-not make it to market in future. As the manager of Trek’s mountain bike and cyclocross field test program, Brown has what many would deem the dream job.

We sat down with Travis Brown during Trek World Australia (an annual dealer-only event), asked him a few questions and let the voice recorder run.

BikeExchange (BE): So what does an average work day look like for you?

Travis Brown (TB): I’m in Colorado, I’m at my desk until noon and then I ride from noon. When I’m at my desk, I’m managing field testers which have failed product that need replacement or we’ve had new test product come in that needs to get under riders as soon as possible. We have a very short de-bugging window for pilot bikes. That’s part of our field development that has saved us (Trek) millions of dollars in warranty claims.

BE: So that’s just about finding potential issues early?

TB: Yes. Once we’re past our development phase and all the design engineering is done, we do a rough pilot run across all sizes and we put these beneath our pilot test team who ride their faces off for a couple of months. We’ll find any issues that’ll be a pain in the neck for the dealer or consumer. This program has reduced unforeseen expenses greatly.

BE: So who are these people?

TB: I tap riders on our professional teams, I tap athletes on regional elite teams, I use ex-pros, I use people that don’t race that have no interest in racing too. One of the most important things is that they’re diligent with their feedback. We have an online field feedback database and we need them to be consistent and accurate with what they report. So when we do have an issue, we can say ‘all right, this wheel or frame had 216 hours of use on it and it formed this issue’. If we replicate that on another bike we then know it’s not an anomaly.

That de-bugging product we get just two months before final commitments need to be made to the product. It’s been great though, we’ve found a lot of things.

BE: How long have you been in this role for?

TB: About ten years. When I moved off the race team into the product department, I really was just an individual tester. It quickly became apparent that I wasn’t going to be able to manage the demand all by myself and so I started looking for a field team that could help me do that.

I have athletes that cycle in and out, some athletes I thought that were going to be great testers and are not, others surprised me and have turned out great.

It’s been a constant refinement and I have about two-dozen riders across all different mountain and cyclocross disciplines. The distribution of riders and their personal styles change from season to season, but I have everything from pure cross-country, pure enduro and even downhill riders. All of these cross over disciplines though, so my downhill guy crosses over into CX (cyclocross) and trail riding too. It’s cool to have, as the guy racing WC downhill can add perspective to a trail bike that I can’t provide.

TB: We’re going to see a continued experimentation with section width of tyres and rims, along with diameter. I don’t think the debate is over. There’s going to be a lot of flux still. There’s going to be a pendulum swing back from 27.5in, that size might have been pushed into more markets than it belongs in. It has a profile that’s credible in a lot of situations and so it’ll last in a lot of places, but it’ll trickle out of a lot of places.

Generally, cross-country will be the first place you’ll see numbers of 27.5in dwindle. Until there are apples to apples comparable product in 27.5 and 29in gravity, you’ll see the smaller wheel size dominate. That’s one thing you always need to evaluate in wheel design – how to change one variable and keep everything else the same. That’s the hard part.

I think you can expect to see tyre volumes grow from what we consider now our normal tyre range. 2.2 to 2.6in widths will skew up. And that’s because of the new bookends we’ve established from fat and plus-sized bikes.

The advantages we see in most situations with adding tyre volume is almost always faster and more confident riding. So whether that’s a new plus-bike rider who is going from 2.8 to 3.0 or looking to go above 3.0 or a cross country rider going wider than 2.2. We’re going to see things continue to grow. Minutes before our chat, Travis Brown explained to dealers how the Trek Factory race team ended up with a lighter system by using a narrower tyre and a wider carbon rim to make up the volume.

It was not that many years ago that a 1.9 or 2.0 tyre was perfectly reasonable for racing. Our athletes now realise that higher volume is almost always faster – and that can be achieved at the rim instead of in a heavier (wider) tyre.

But we’re limited too. We may be at a stopping point in the fat bike category with width; I mean there are some production tyres that are truly 5inches wide. That requires imaginative things (wheel, frame and drivetrain design) to make these things function properly.

As far as diameter, I don’t think we’re close to seeing the end of what diameters dominant. The production (Trek) Stache (ed: this features 29+ tyres) is an example of this. Our Farley, which is 27.5 x 4.5in, is pretty cutting edge that in our testing shows clear advantages over smaller diameter wheels. There’s lots of experimentation left.

BE: There is technology that has come from mountain biking that is being seen in road. Do you see these volume trends transferring to road?

TB: There’s always a lot of cross-pollination (at Trek). Our development groups, whether road, mountain or cyclocross talk to each other. All of us as enthusiasts are developing to a point where we love all kinds of bikes. We want to do a crit, then we want to do a MTB race, then Enduro. And that’s becoming more and more common. We don’t stay in one discipline. That’s the case at Trek too.

It goes both ways though, the IsoSpeed technology started on the road (Domane) and then came to the Procaliber mountain bike hardtail. The new Trek Domane takes IsoSpeed to a new level, with adjustable flex at back and a pivoting headset cup up front. Perhaps these are signs of things to come?

Road tyres are getting wider all the time, and it’s not just for ride quality. If the tyre and rim are designed in concert, there are a lot of advantages to be gained – including aero. Low hanging fruit exists there. We’re not at an end point there either.

BE: What do you believe is the tech development that has progressed the sport of mountain biking furthest in the past five years?

TB: There’s a few things, the last five years has been tyre volume and relative expense reduction of carbon fibre - especially in wheels. The compromise of going wider is smaller with these exotic materials. Fat bikes really pushed things to a new point; we wouldn’t have plus-bikes without them. These leaps of technology opened the door and make it exciting for everyone involved.

BE: A number of years ago (2007) you had your name associated with the Trek ‘69er’. 29in wheel in front, 26in out back. Can you explain this multi-sized wheel platform?

TB: That bike came out a time where 29ers were just starting to gain traction in the marketplace. We had two competing mountain bike brands in the market, with (Gary) Fisher and Trek. We had dealers that had both on the shop floors. At that point we felt we couldn’t have both brands offering 29er hardtails as it would just cannibalise our own brands, it didn’t make sense.

So we started experimenting with things that gave similar characteristics. I proposed the mixed wheel platform and at the time, it was a pretty elegant solution to a number of the challenges we had. But two years later, we didn’t have the challenge between brands.

Unfortunately at the time the Trek mountain bike brand wasn’t as strong as what it is now, and we didn’t have the credibility to push such a platform – even if it worked. That bike only last a couple of years. It’s not because it didn’t have a unique performance profile, but we just weren’t quite the right brand to push it at the time.

BE: So do you still believe in multiple wheel sizes on one bike?

TB: I do! We continue to prototype mixed wheel platforms for the reason of teaching and learning from field testers. It spot lights the difference that the front and rear wheels play in a certain way and it provides testers a deeper understanding (of bike handling). We still use it as a test-training tool.

Fundamentals of that platform I think will rear its head in future bikes, it helps with challengers that the industry will face (ed. such as tyre clearance and drivetrain compatibility). It might not be Trek that does it, but like almost everything in the bike industry, most of what we consider as innovation has been done somewhere along the 200 year history of the bicycle. Most stuff, at least conceptually has been thought of before.

BE: Thanks for the chat Travis.