Van Avermaet does the double! 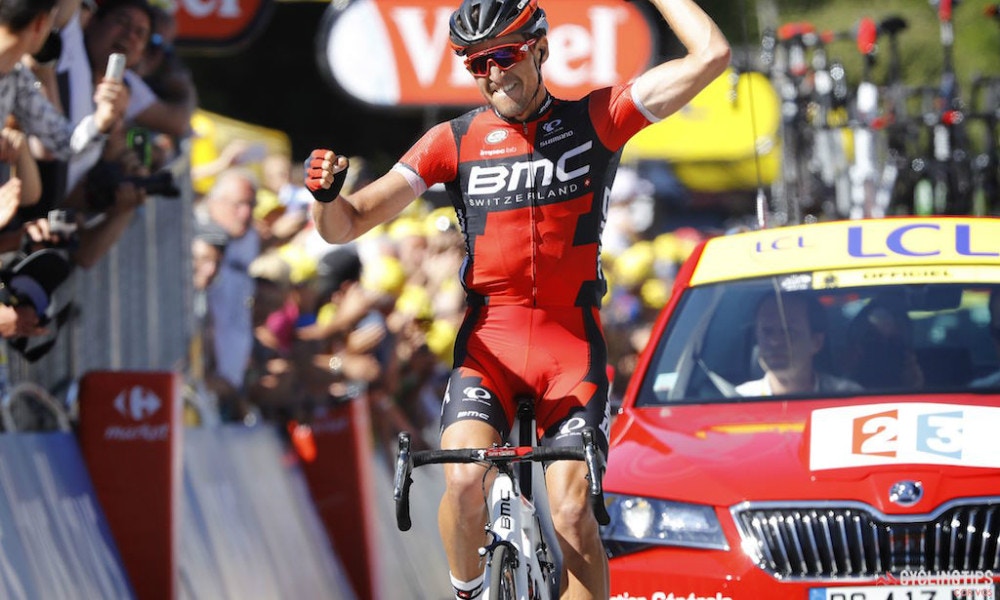 Belgian Greg Van Avermaet was the last man standing after a daylong breakaway on stage 5 of the Tour de France, soloing to victory in Le Lioran Wednesday and pulling on the coveted maillot jaune as a reward for his efforts.

Van Avermaet (BMC Racing) rode away from compatriot Thomas De Gendt (Lotto-Soudal) on the penultimate climb, the steep ascent of the Col du Perthus, with 17km remaining, winning the stage by over two minutes.

The win came as redemption for the BMC rider, who began the season by winning Omloop Het Nieuwsblad and Tirreno-Adriatico, but suffered heartache when he broke his collarbone during the Tour of Flanders, a season goal where he took the start as a pre-race favorite.

“It feels great,” Van Avermaet said of his double — the win and taking the maillot jaune. “I never dreamed about yellow. I was happy with my stage win last year, so to win and take yellow, it’s once in a lifetime opportunity. I’m going to enjoy it as long as possible.”

Romain Bardet (Ag2r-La Mondiale) created a shake up in the finale, attacking over the top of the final climb with a just a narrow and technical 2.5km descent left to the finish. The Movistar duo of Alejandro Valverde and Nairo Quintana were attentive and immediately followed the Frenchman’s wheel with Thibaut Pinot (FDJ) also latching on.

Chris Froome (Team Sky) and several other GC contenders were temporarily on the back foot, but quickly closed the gap. However Alberto Contador (Tinkoff), who has struggled to stand out of the saddle in recent days due to rashes on the first two stages, was dropped from the group. While the GC contenders finished together, Contador lost a further 33 seconds in the fight for the overall title.

“For us it was about staying up front and not losing any time on those GC guys,” Froome said. “Those descents were pretty tricky and dangerous. Obviously we knew the breakaway was going to stay away today and the jersey’s gone to Van Avermaet — he did a pretty impressive ride there! From our side we’re happy with that. We’re happy to stay out of trouble and it’s one more day down. It wasn’t really in our interest today [to send guys down the road]. We wanted to stay out of trouble. The big GC days are still to come. Today was one of those days where, yes it was selective, but it wasn’t necessarily going to be a big showdown between the contenders themselves.”

The fifth stage of the Tour de France coursed through the Massif Central and served as a precursor to the Pyrenees coming on Friday. The route covered 216km (134.2mi) from Limoges to Le Lorian and featured four climbs in the final 50km, all which were category 3 or category 2. The final climb, the Col de Font de Cère, crested with just 2.5km to the finish.

No breakaways had yet survived to the finish in this year’s Tour, and after a tough series of opening flat stages, many predicted Stage 5 might be a day for the breakaway, with GC contenders watching each other and the profile too difficult for the pure sprints.

The breakaway built an advantage of over six minutes before cooperation amongst them began to deteriorate. De Gendt, van Avermaet, and Grivko broke away from the others with still 130km to the finish.

“In the beginning Grivko and Majka weren’t working, it was me and Thomas De Gendt who were the strongest,” Van Avermaet said.

The peloton meanwhile continued to roll steadily and the gap continued to grow quickly, reaching over 11 minutes with 100km to go. Team Sky took the duty of controlling the peloton with strongman Ian Stannard spending considerable time in the wind setting tempo.

A small crash disrupted the peloton with 75km to the finish with the polka-dot jersey of Jasper Stuyven (Trek-Segafredo) seen on the ground along with Sylvain Chavanel (Direct Energie). All riders remounted and rejoined the peloton.

Van Avermaet passed through the intermediate sprint at 75km still to race and the three-second time bonus he garnered moved him to within 15 seconds of the maillot jaune of Sagan.

Into the final 40km of the stage the terrain had begun to dip and dive over the hills and climbs of the Massif Central region.

Grivko was dropped from the lead on the category 2 Puy Mary with 32km to race. At the front of the peloton, Team Movistar drove the pace, bringing the gap down under 10 minutes.

The first category 2 climb of this year’s Tour was a shock to many, as the peloton splintered on the climb. The heat also played a factor, with the mercury creeping towards 30 degrees Celsius (86F). The maillot jaune of Sagan was seen going backwards on the climb, along with Giro d’Italia winner Vincenzo Nibali (Astana).

When the peloton crested the summit of the Puy Mary only about 30 riders remained, but all of the general classification contenders were there.

With 17km remaining, van Avermaet attacked De Gendt on the penultimate climb of the day, the category 2 Col du Perthus. The Flandrien set off alone in search of the stage win and the maillot jaune.

Van Avermaet went over the top of the Col du Perthus with nearly a minute advantage over his Belgian compatriot. A changing of the guard had occurred at the front of the peloton, as Team Sky upped the pace and put more riders in difficulty. The peloton summited the penultimate climb less than six minutes behind the lone leader.

Gautier and Pauwels, who had been riding nearly the entirety of the stage between the leaders and peloton, both crashed on the descent of the Perthus; neither suffered significant injuries and both continued on to finish the stage.

Van Avermaet powered over the final category 3 climb in first position and quickly navigated the tricky 2.5km descent to the finish. He rode up the finishing straight all smiles, the win and maillot jaune a worthy consolation after a troubling spring.

De Gendt held on for second and took the lead in the King of the Mountains classification.

“I have no regrets,” De Gendt said. “I’ve just had bad luck because of being at the front with Greg Van Avermaet who is one of the best riders in the world. My team told me not to sprint for the polka-dot jersey but I still went for the points because only once in a lifetime it’s nice to have the polka-dot jersey. I want to keep it now and I’ll try to add some more points to my account but I don’t think it’ll be possible till the end.”

Though minutes behind the stage winner, the greatly thinned peloton charged over the final climb. Bardet tried an attack over the top in search to gain a couple of seconds in the overall, but all of the GC contenders were well attentive and latched onto the lanky climber’s attack, except for one.

Contador was all over his machine as he chased valiantly down the final descent in hopes of limiting his time loss and possibly rejoining the group. However, Valverde drove the GC group to the finish with Quintana in tow, making sure Contador would not rejoin the group.

The GC group finished 5:07 behind the stage winner with Contador coming in 5:40 behind.

“It was a very difficult day,” Contador said. “I thought I had regained some energy, but I paid the toll in the end. Of course, my two crashes of the first days hurt a lot. I knew it would be difficult. What matters is to recuperate quickly and not to lose morale. I didn’t lose the morale, the crowds support me, it’s incredible the support I’m getting. I’m going to do my best and see what I can do.”

“I’m not necessarily disappointed to not take the yellow jersey as many people told me I would because the breakaway was very strong,” Alaphilippe said. “Since I was second on GC, some teams thought it was up to us to control, but our team is centered around Marcel Kittel to win bunch sprints like yesterday. That will be our task again tomorrow. I’m just happy with keeping the white jersey. I struggled to stay in the main group but I didn’t give up. It was hard. One more day in the white jersey makes me happy.”

Sagan lost the maillot jaune, but will wear the green jersey on Stage 6 as leader of the points classification.

“I’m not disappointed to lose the yellow jersey, c’est la vie,” Sagan said. “The yellow jersey is nice but one day it has to end. It’s the race. Every year it’s my goal to have green jersey. It’s still long way to Paris. It was a very hard stage today. We tried to keep the breakaway not too far from us but they rode very strongly.”

De Gendt was awarded the Most Aggressive Rider prize for Stage 5.

With a flat stage on Thursday, the GC men should have a day to catch their breath before they go to battle in the Pyrenees on Friday. The 190.5km sixth stage from Arpajon-sur-Cère to Montauban should see the sprinters go head-to-head, as this will be their last opportunity for a shot at the stage win before stage 10 after the Tour’s first rest day.

• The last yellow jersey holder from Belgium was Jan Bakelants, in 2013.

• For the first time in 16 years, no rider has abandoned the Tour de France after the first five stages. Adam Yates showed his class on a day that the contenders started to eye each other off. The 2015 Classica Ciclista San Sebastian was part of a selection of favourites that formed on the penultimate climb ultimately finishing in eighth place on the stage and now 13th overall.

Sport director Matt White praised the performance of Yates and the team on a tough day in the hills.

“We thought it was going to be a very aggressive day,” said White. “It was a medium mountains stage and Movistar did what we thought Team Sky were going to do and put the pressure on over the final climbs.”

“Quite a few teams were in difficulty towards the end and it is a really nice start from Adam (Yates) on our first entry into the mountains. On the whole I am pleased with how the team rode today.

“There is a long way to go in the race and we are still on the hunt for stage wins, that’s our primary objective and when we see an opportunity we will go for it.”