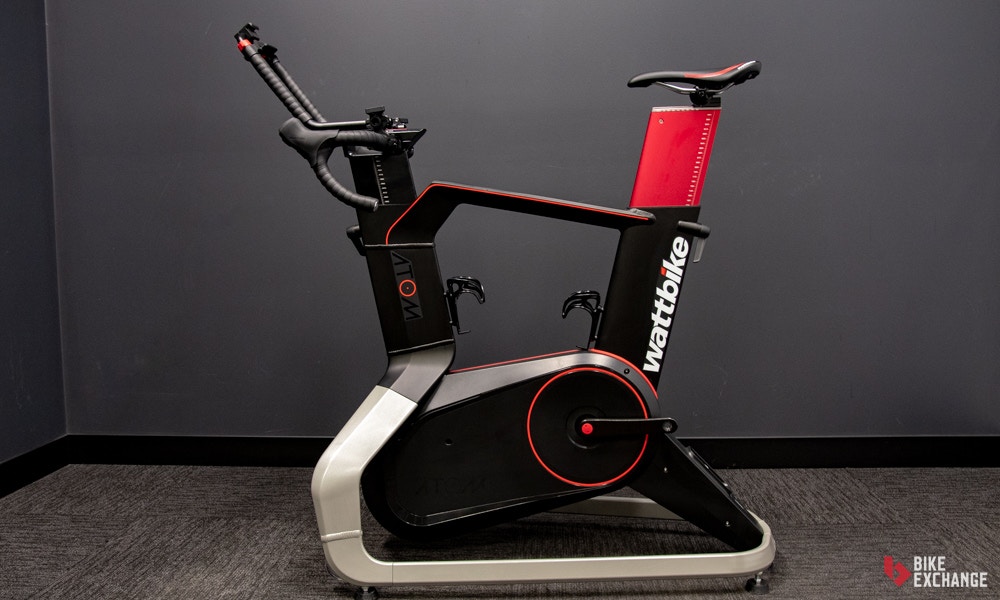 After unveiling the wildly popular Trainer Pro in 2008, WattBike had a tough task ahead of improving on what is arguably the most widely used specialist stationary training bike in the world.

Trimmed down, refined, loaded with connectivity features, and presented with a sleek, contemporary styled frame. It may be a decade later, but the British firm’s new ATOM hits back in a big way.

So after three months of use, countless sweat-drenched training sessions and many a virtual bunch ride, join us as BikeExchange’s content editor, Taylor Jones, takes you through our thoughts of the WattBike ATOM smart bike.

Adapting to the New School 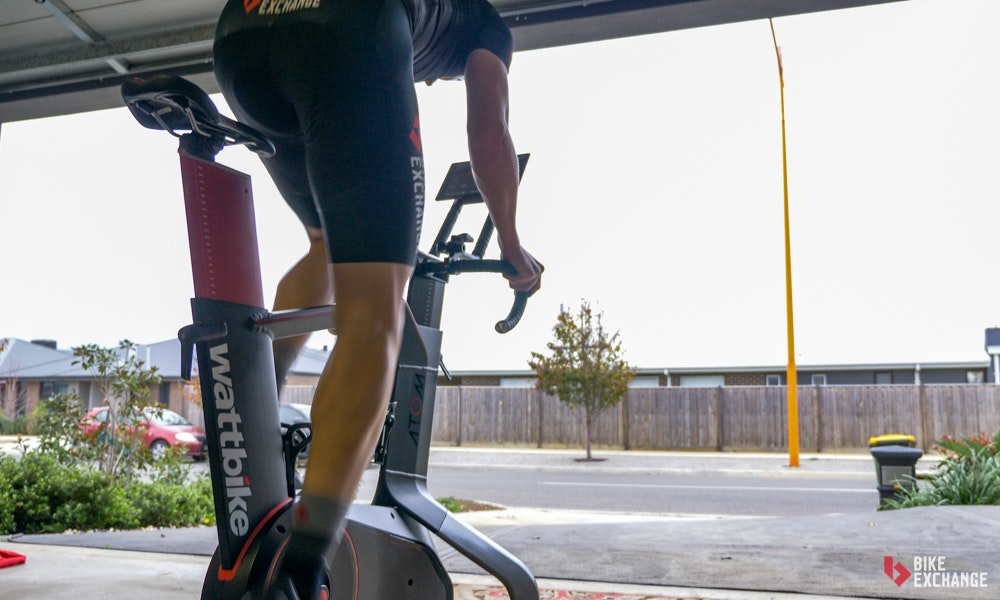 Whilst the WattBike Trainer and Trainer Pro enjoyed great popularity with professional and amateur athletes alike, the explosion in popularity of virtual training software like Zwift and The Sufferfest coaxed a large volume of WattBike users off cumbersome stationary trainers and onto svelte, smaller footprint smart trainers. The ATOM is a radical diversion from previous bikes in the WattBike product line-up and one look at the spec sheet reveals this bike is designed to tackle the booming online training market.

The bike itself sees a large number of physical differences, including a change in resistance units, improved connectivity features, a weight relieved frame, a svelte new aesthetic and improved ride feel to name just a few.

The Wattbike is not yet available in Australia, however, a spokesperson from Wattbike hinted that a distributor should be secured within the next six months. Pricing is also yet to be confirmed, however, given the unit’s global cost of GBP£1,599, I anticipate local buyers won’t get much change, if any, from AUD$3,000 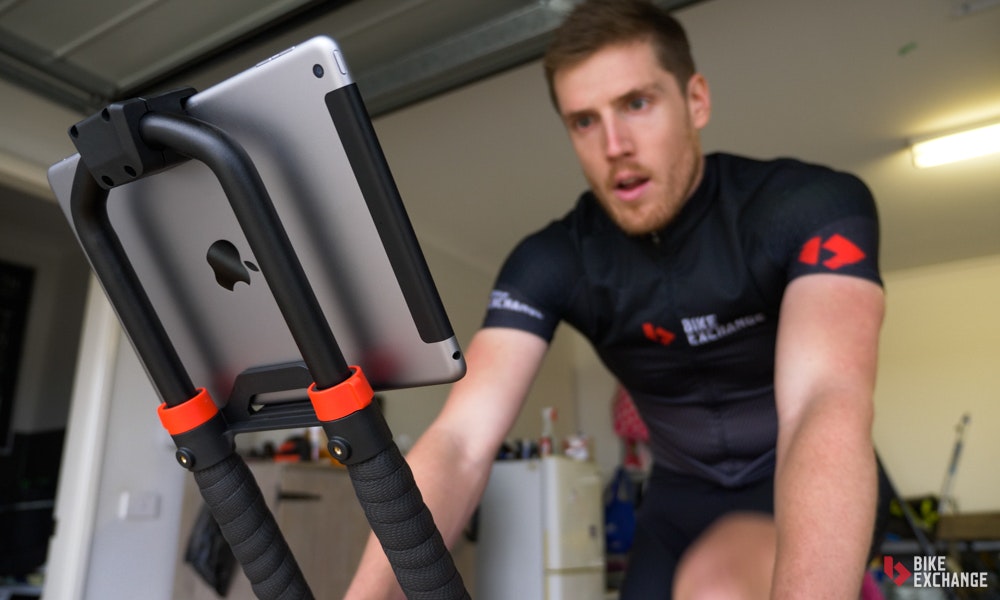 WattBike claim to hold data and analysis at its core, allowing users to trainer harder and smarter. With this in mind, and being marketed as a smart product, it should come as no surprise to learn that the ATOM is bang up to date and loaded with connectivity features.

The ATOM sports an integrated dual-sided powermeter (+/- 2% accuracy). ANT+ F-EC and Bluetooth Smart wireless connectivity both feature as standard. Maximum simulated slope sits at a claimed 25%, whereas maximum resistance from the dual 4.5kg magnetic flywheels is pegged at a stout 2000w. Adding to these industry standard features, the ATOM has the ability to simulate the gear shifting found on a traditional road bike. With 22 simulated gears at the rider's disposal, the ATOM is the most convincing effort at an all-in-one smart bike I’ve experienced so far.

More than just a token companion app, Wattbike have poured considerable resources into the creation of a polished and professional-level training app dubbed “Wattbike Hub”. Capable of tracking and displaying up to 37 metrics from your workouts and rides, the Wattbike Hub serves as a, well, a hub for Wattbike users to review, track and analyse their ride data. 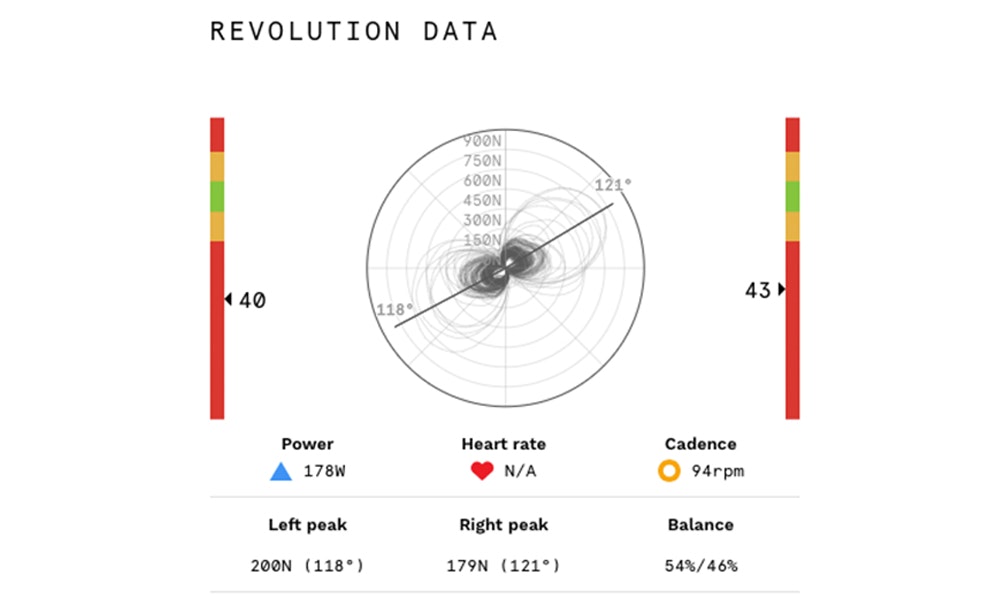 Outside of the standard metrics, one area that Wattbike has paid particular attention to is the analysis of pedaling efficiency. As well as reporting on left and right power differential, the app also tracks revolution data including peak torque output and cadence to coach riders on methods to improve their pedaling efficiency. Wattbike claims this emphasis on pedaling efficiency can translate into FTP (Functional Threshold Power) gains, injury prevention and endurance gains.

Whilst the Hub serves as a strong analysis tool, it also houses a number of workout and virtual climbs modeled off some of the world’s most desirable riding locations such as l’Alpe D’Huez, Sa Calobra, and the Stelvio Pass to name a few. 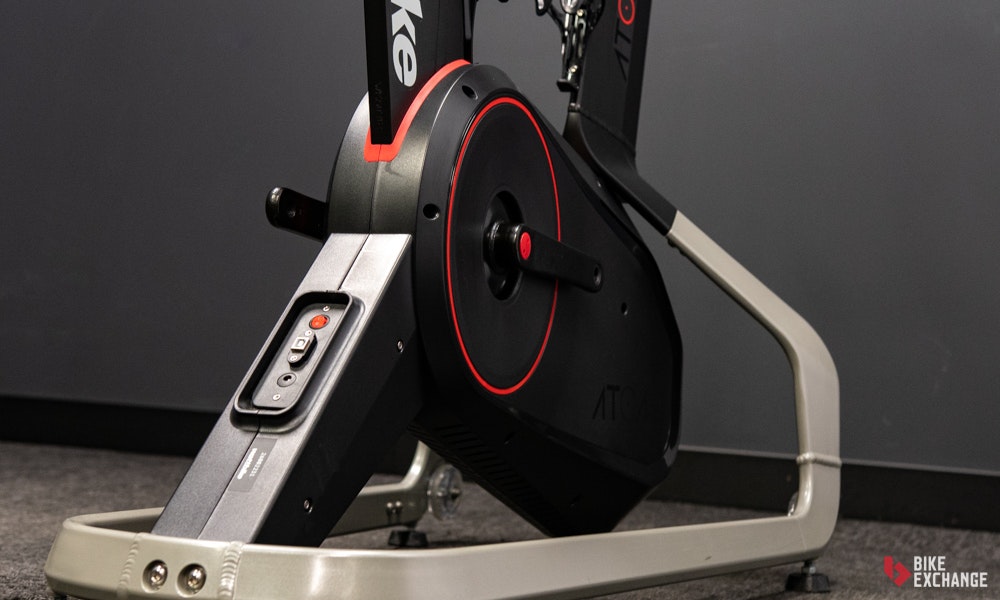 Despite not currently being sold in Australia, Wattbike provided us with a production-spec ATOM some three months ago. In that time I’ve clocked up countless workouts, virtual rides, and even online races aboard the connected stationary steed.

Upon taking delivery of the ATOM, aside from the awkward size of the seriously large box and its heft, unboxing the bike was a largely fuss-free affair. The bike was shipped more or less completely assembled, meaning I was plugged in and pedaling within five minutes of freeing the bike from its cardboard mansion. When I say largely assembled, the only items needing to be added out of the box were the integrated tablet holder / triathlon bars and our preferred choice of pedals, simple.

The footprint of the bike is impressively minimal, much smaller than a traditional bike attached to a smart trainer. Wheels located at the front of the trainer made it easy to shift the bike around, a welcome addition when considering the fact the unit weighs in at a rotund 44 kilograms. 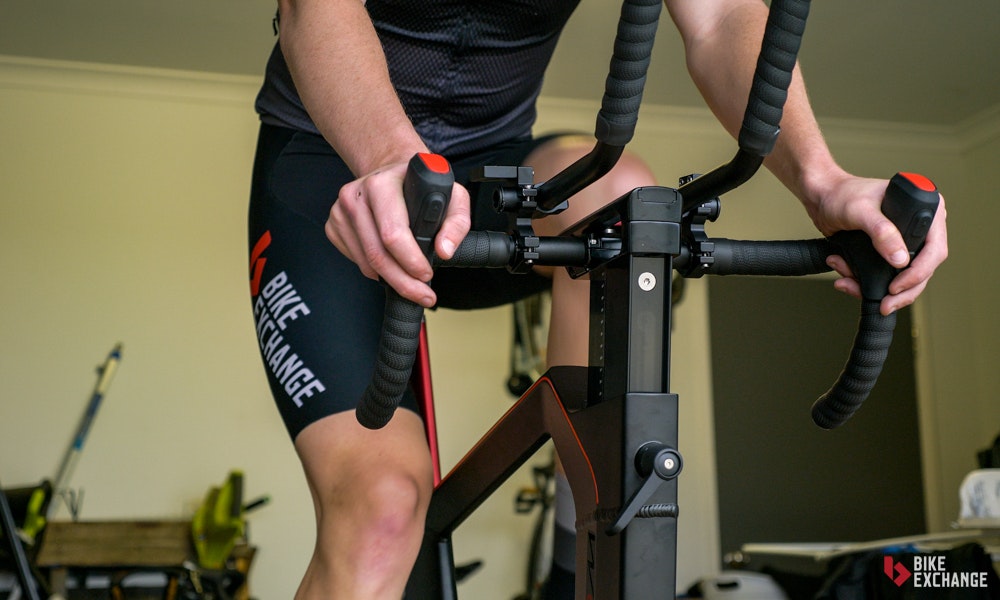 With the aid of the Wattbike website, dialing in a position was just as simple as the unboxing set-up. Using a number of simple measurements taken from your existing bike, the website provides you with all the information you need to replicate your position. There’s an added bonus here too, if your gym or fitness studio is outfitted with a fleet of Wattbikes, the details spat out by the Wattbike website are transferable across the entire product lineup.

Powering the Wattbike up is as simple as connecting the supplied power cord and flicking the switch. Wattbike claims every ATOM is shipped calibrated from the factory. Whilst I was dubious to this claim, out of the box accuracy was impressive and tracked inline with some powermeter equipped pedals.

Being a smart product, the ATOM is also at the mercy of its firmware. Thankfully updating the bike is as easy as connecting it to a phone, tablet or laptop. Any over the air firmware updates are downloaded and applied to the unit within one minute of connection. This largely takes place in the background too, meaning that you won’t have to stress about being delayed by lengthy firmware updates while hustling to make the start line for that Zwift bunch ride. 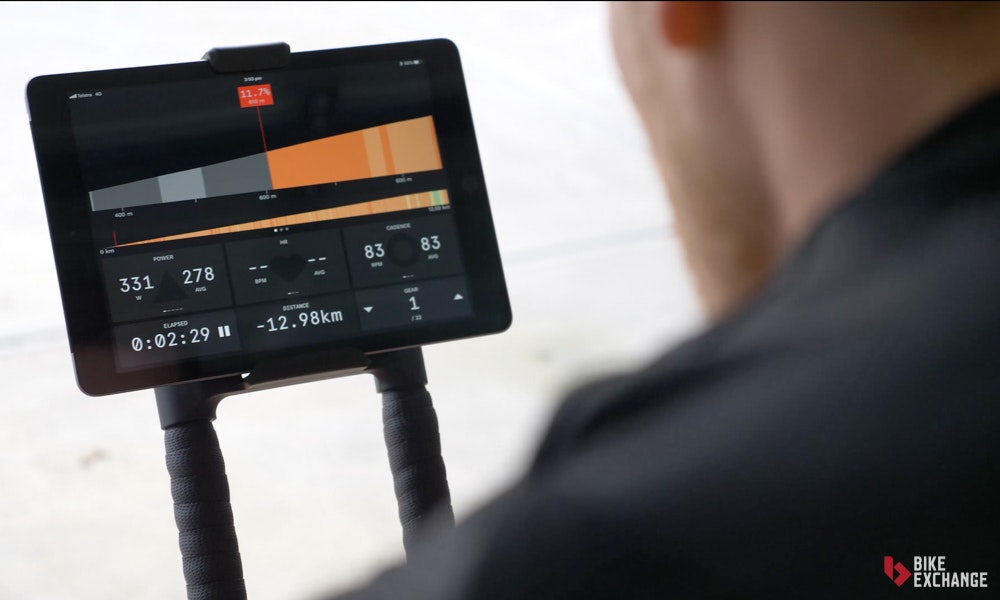 So it’s easy to set-up, but how is it to ride? For my first uses on the Wattbike, I opted to skip jumping straight into Watopia (a land in Zwift) and instead loaded up the Wattbike Hub app. Not one to shy away from a challenge, I loaded up Mont Ventoux and got cracking. I was immediately impressed by the ride feel, with small changes in gradient having a noticeable difference in the resistance offered. Much of this is thanks to the whopping combined flywheel weight of 9kg.

Next, I took a trip to Sufferlandria courtesy of The Sufferfest, with the Wattbike serving as a willing participant in my sweaty interval session. The ATOM then transported me to the virtual playground of Watopia, performing its duties in the simulated landscape admirably.

This connectivity to third-party apps easily matches rival smart trainers on the market. Regardless of whether I opted to set up an ANT+ connection to my laptop, or run a workout off my iPad, there was no change in the ease of connection or ride feel between the two. 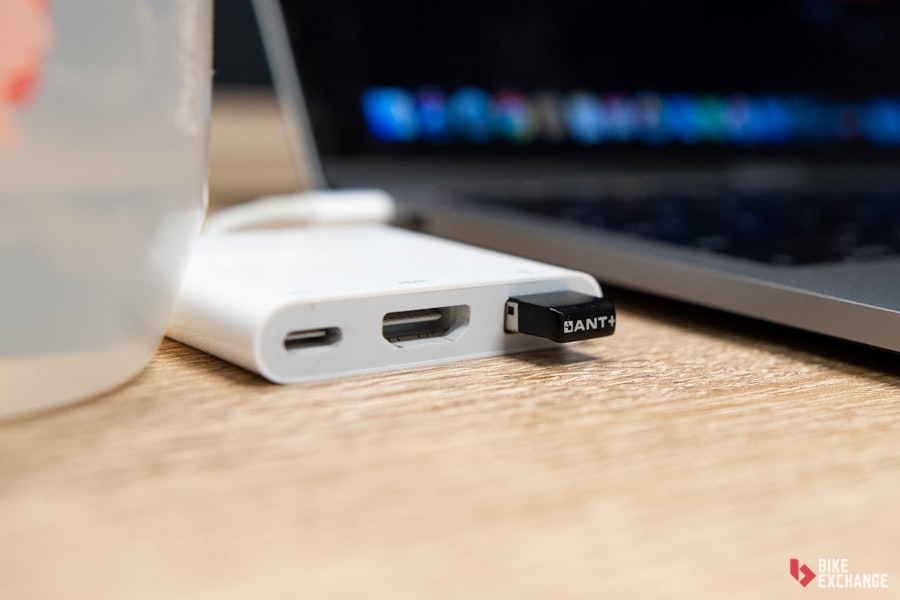 One criticism that did arise (and continued) throughout the review period was the speed at which the bike simulated shifting. Whilst the ATOM does a commendable job at replicating a gear change on steeper terrain, I’d caution riders to manage their expectations on what to expect in shift feel. The ATOM is set-up to simulate a 52/36T crankset with a standard 11/28T cassette out back. Initial impressions were that the bike was slightly sluggish to react when you wanted to dump a handful of gears heading into a punchy climb. It takes around five to six seconds for the Wattbike to scale its resistance in accordance with the full range of 22 gears. What was welcomed however was how linear the simulated gear changes were. Ramping up power, or gradually easing it off as the virtual terrain undulated, allowing me to keep my rhythm without a flow stopping change.

However, this linear progression in resistance does have its downside. When undertaking short sharp sprint intervals, it was easy to overwhelm the resistance unit and I’d be left spinning out. This was the case in both simulation and ERG modes, with the only way around it to be extending the time of the interval and waiting for the resistance to come in before undertaking the effort. Where the Wattbike does shine is long steady tempo efforts or virtual rides over undulating terrain. These uses playing into the strengths of the ATOM and it’s easy to forget you’re riding a stationary bike at all, a big plus.

On the subject of putting the power down, the Wattbike, being a robustly built stationary trainer, does require a slight alteration in riding style compared to a traditional bike on a smart trainer. Build solid, the ATOM is super stable offering up minimal, if any lateral flex. A spokesperson from Wattbike had informed me to expect an initial 10% reduction in power output, purely due to the reduced recruitment of muscles inhibiting the power generated by a rider throwing their bike from side to side is missing. The flip side of this being that when it comes time to translate your gains made indoors back onto a normal bike outdoors, you’ll be theoretically stronger and more efficient. 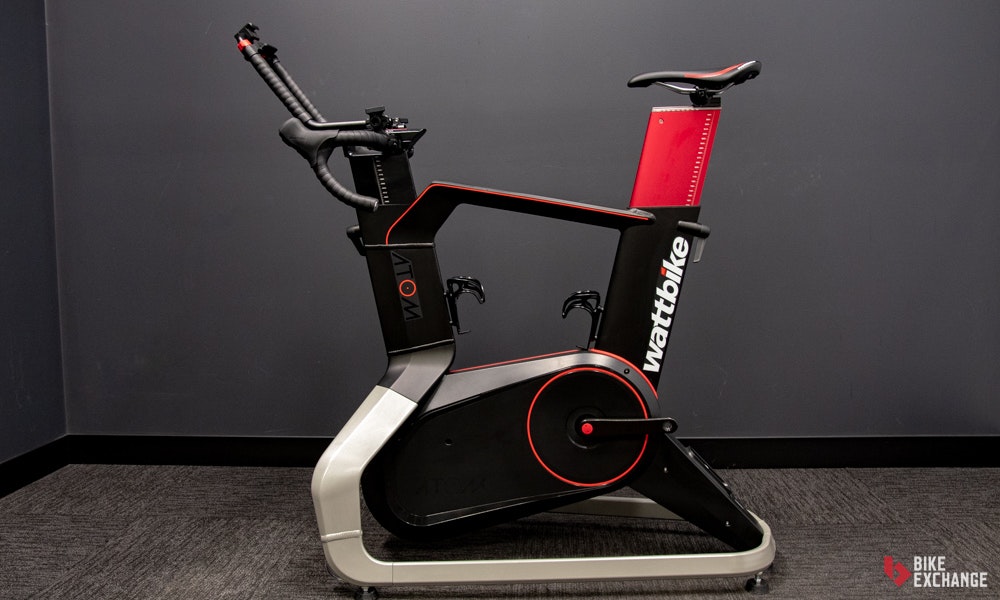 There’s little denying that virtual third party training apps such as Zwift have changed the way that we, as riders, view indoor training. Gone are the days where we associate training indoors with staring at a wall, with only the pain in your legs and the thoughts in your mind for company.

With ATOM Wattbike have done a commendable job at bringing a stationary bike to market that’s equally as adept at a soulless interval session as it is joining your mates on a bunch ride in the virtual world. Is the bike perfect? No, but the “release early, update often” approach undertaken by Wattbike ensures that with each firmware update, the ATOM will only get better and better. So if you’re looking for a set and forget smart training solution and have no qualms on the price, the Wattbike ATOM serves as a sound option for riders want to join the online cycling world, without relegating a bike from their fleet to trainer duties.

Looking to get into riding in the virtual world and don’t know where to begin? Our ultimate guide to indoor trainers is loaded with all the information you need