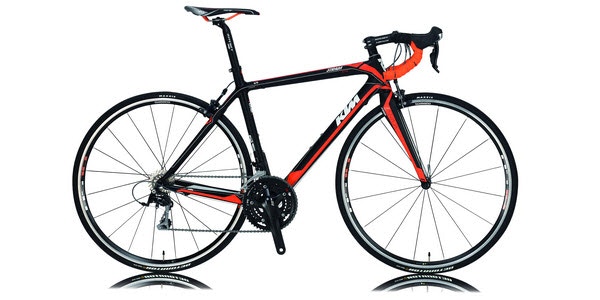 Most cyclists either come from or have a concurrent knowledge of the other two-wheeled sport, motorcycling. It makes it a given then that the name ‘KTM’ is already well known. With a history in motorbikes stretching back nearly eighty years, the Austrian company have been at the forefront of two-wheeled development for a long time.

It’s when “KTM” and “bicycles” are mentioned that some people start to look a little confused. However KTM also have a rich history in bikes, with their cyclocross frames being ridden to Austrian National title victories in the 1970’s. Expanding in to mountain bikes in the 90’s and of recent times in to carbon fibre road bikes.

One of their latest offerings is the Strada RC 1.0 – and first impressions were extremely positive. Faired top tube, down tube and fork (owing to its aerodynamic design) and the unmistakeable KTM logo were tastefully integrated in to a classy, yet contemporate, scheme. Which even in spite of using a very eye catching hue of orange was still sedate enough that it didn’t shock my ride partners when I appeared on it. Even the two tone blank and orange bar tape does did not look out of place.

Components for the KTM are also well considered. Complete Shimano 105 groupset – including brakes (which some brands will swap out for a cheaper proprietary version). 5700 105 is also both now 10 speed but additionally has hoods that are significantly more comfortable than previous iterations. The cockpit (bar, stem and seatpost) are also all matching, Ritchey, components. Nice.

Gearing is generous – compact 50-34 cranks paired with an 11-28 cassette. It is sometimes overlooked that the combination of a 50 tooth front chain ring and an 11 tooth rear sprocket is actually a larger gearing than a 53 (standard) front and 12 tooth rear. So whilst a 12-27 cassette might have given tighter gearing, the 11-28 allows more flexibility. Enough gears ensure you’re able to power over any climb yet with ample at the bottom end for the high speed descent.

Which brings me to handling and ride quality. The Strada was well behaved and balanced on all descents. Some bikes can show their limitations at speed, yet the RC 1.0 allowed me to rail through sweeping corners at 70km/h+ with ease.

Up hills and out of the saddle, there was no unwanted flex. Steering was responsive and road chatter was smoothed out. So much that you noticed the lack of any noise coming from the bike, even on rough roads. Internal cable rattle is enough to drive any rider nuts, so to have a bike designed where it’s not an issue is refreshing and very much appreciated.

In all, it was all these little touches (the paint, matching cockpit, complete groupset, well routed cables) that impressed me as much as the great ride quality and handling of the KTM. It speaks volumes for the time and effort the company has put in to the Strada RC 1.0. Which, given the price point, makes it worthy of consideration for either your first bike or an addition to the stable.

SEARCH for the KTM Strada RC 1.0