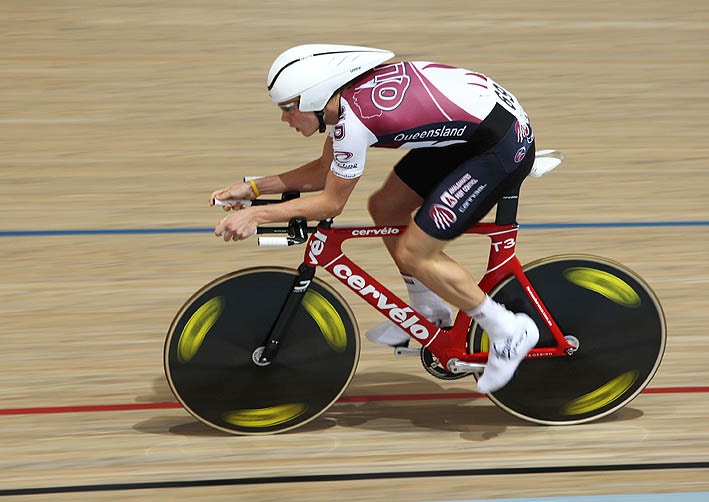 A host of junior and elite World Champions will descend on Adelaide this week for the 2010 Australian Elite, U19 and Para-cycling Track Championships being staged at the Super-Drome from Tuesday 2 to Sunday 7 February.
The Queensland team boasts the 2009 Junior World Champion and world record holder for the 3km individual pursuit, Michael Hepburn. A talented road and track cyclist, Hepburn stepped up to elite track competition at the recent UCI World Cup round in Beijing where he placed second in the 4km individual pursuit. He was also a member of the Australian quartet that claimed gold in the team pursuit in China and last November in the Melbourne round of the World Cup. Hepburn set a U19 3km world record in Adelaide last year to claim the 'Ride of the Series' award.
Reigning omnium World Champions, Victorian Leigh Howard and Western Australian Josie Tomic, will both line up in Adelaide as will 2009 points race World Champion, Cameron Meyer (WA).
Sydney's Kaarle McCulloch teamed with Meares to win gold in the team sprint at the 2009 World Championships but in Adelaide will be racing for New South Wales with Cassandra Kell while Queensland will be missing Meares, who has withdrawn from the Championships suffering fatigue, and former speed skater Emily Rosemond, who is ill.
Six time junior World Champion, Megan Dunn, will race her first Australian Championships in the elite ranks and the 'Dubbo dynamo' has good form. In her elite debut last month at the Beijing World Cup she won the points race and is expected to be one to watch in Adelaide.
The pursuit teams from Western Australia are tipped to be hard to beat with the women's trio of reigning World Cup Series Champions Josie Tomic and Sarah Kent being joined by Melissa Hoskins. The trio won the gold at last year's nationals are are keen to repeat the feat. In the men's open competition Cameron and Travis Meyer, Luke Durbridge and Michael Freiberg are also defending champions. The Meyer brothers recently claimed Australian titles on the road with Cameron collecting the elite time trial win and Travis the elite road race. Durbridge collected gold in both the Madison and road time trial at last year's Junior World Championships and has already notched up World Cup gold in both Beijing and Melbourne in the team pursuit with the national team.
2009 Para-cycling pursuit champion Michael Gallagher won two gold medals at last year's titles and will be keen to claim the pursuit and time trial gold medals again this year.
A bulging disc in his back has forced the withdrawal of Victorian sprinter Shane Perkins who won four gold medals last year. His absence leaves the men's sprint competition wide open with the likes of Canberra's Dan Ellis, Perth's Scott Sunderland, Victoria's Jason Niblett and several other contenders vying for the sprint, time trial, keirin and team sprint crowns.
Competition gets underway on Tuesday at 2pm with the individual pursuit qualifying session. A detailed event schedule, ticketing information, entry list and results can be found on the Cycling Australia website.