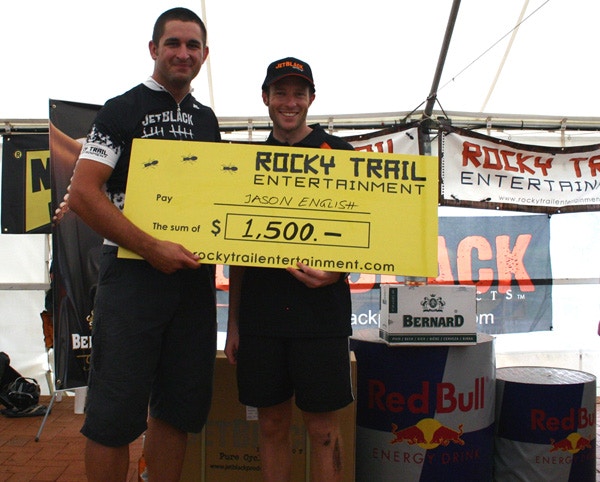 Current 24 hour mountain bike world champion, Jason English from Port Macquarie, says he is on track to defend his world title this year after winning the JetBlack 24 hour Sydney race over the weekend. The 24 hour solo champion along with 450 riders braved torrential rain at Wiseman’s Ferry. English completed 28 grueling laps despite organizers, Rocky Trail Entertainment, being forced to shorten the race to 12 hours.

English admitted to being relieved that the race was shortened to 12 hours after the blistering pace set by the lead riders during the first eight hours. The biggest threat came from another New South Wales rider, John Blankenstein from Tathra.

“I thought I only had to worry about Shane (Taylor) from Canberra. Luckily he pulled out but John was breathing down my neck,” said English.

Blankenstein showed his form uphill while English says he was able to reclaim time on the downhill.

When the race was officially restarted on Saturday morning after being halted at 8 pm the night before there were only four hours remaining. English was still not confident of taking the solo win.

“The big thing was that there was only three minutes (gap) in it,” he explained.

There was added pressure on English with his new sponsor, JetBlack Cycling, being the major sponsor of the race.

Being on two new Pivot bikes meant some benefits but it also could have been his undoing.

“It was great having two bikes. I was able to adjust things like seat height and the pressure in the Fox forks,” said English.
With wet conditions all riders were getting grit in their brake pads forcing them to change pads frequently. For English however that was starting to look like a problem.

English explained, “We were changing them about every four laps so we had to get some more. There were limited available in Australia as yet so the guys started ringing bike shops for me and finally they had to get me some sets from the warehouse.”

English was impressed with the mechanical support he had.

“It was just amazing. Every two laps I got my bike looked at by the JetBlack guys. It was awesome. I don’t know how I did it in the past without that level of support,” he said.

Even after winning the race, English admitted that this close finish was a wake-up call for him.

“John is trained by Mark Fenner. I really am now seriously thinking about getting a coach,” he said.

Blankenstein finished second on equal 28 laps but was 18 minutes down on the winning time. Third place went to David Lodenia from Lawson in New South Wales on 25 laps.

The women’s race was secured by Sydney based rider, Kim Stokeld with a respectable 18 laps. Second was Gill Lugg from Canberra with a total of 16 laps and Phillippa Rostan from Queanbeyan claimed third with 11 laps.

Despite the deluge, teams were sent off in a mass restart on Sunday morning while solo riders were sent out according to their time gaps.

The 24 hour race was New South Wales only qualifying race for solo riders for entry into the World 24 hour solo Mountain Bike Championships which will be held out of the USA and Canada for the first time when they head to Canberra this October.

Australian riders have claimed the World 24 hour solo title only twice before with Craig Gordon in 2006 and James Williamson in 2008.