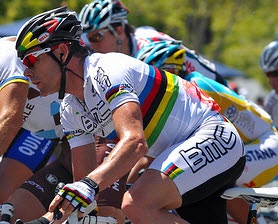 The world's best road cyclists will descend on Ballarat when it hosts the Herald Sun World Cycling Classic Ballarat as the major lead-up event to the 2010 UCI Road World Championships this September.

Organised by Cycling Australia, in conjunction with the City of Ballarat, the 2010 UCI Road Cycling World Championships Organising Committee and the Victorian Government through their support of the Championships, the Herald Sun World Cycling Classic Ballarat will feature an elite women’s and combined elite/under-23 men’s race.

Starting and finishing at Buninyong, the course will travel a 16km circuit with the final lap following the road race course used for the Australian Open Road Championships.

The Herald Sun World Cycling Classic Ballarat is expected to feature some of the world’s best cyclists. Pending the number of entries from World Championship participants additional invitations may be issued to elite riders and registered continental and pro continental teams.

“The Brumby Labor Government is proud to support major sporting events that place our regional centres in the national and international spotlight, promote sport and boost tourism.”

Mr Palmer said he was expecting a strong representation from competing nations after requests to host a preparation event.

“The teams and riders are still to be confirmed, as obviously we are still waiting confirmation on the national teams for the championships themselves and this won’t take place until late August, early September, but we have received a good indication from many countries that they would like to participate in a high quality pre-championships event,” Mr Palmer said.

“The course has been designed to ensure that it is not too tough, but still provides a solid hit out and an opportunity for riders to acclimatise to Australian conditions,” he said. “Having the final lap on the testing nationals’ circuit will give them a taste of what to expect in Geelong the following week.”

The Herald Sun World Cycling Classic Ballarat will create a bumper weekend of cycling in the goldfields city with the Australian Masters Championships expected to attract more than 800 interstate and international competitors across five days of competition (Friday, 24 to Tuesday, 28 September).

“This comprehensive road cycling event reinforces Ballarat’s reputation as the ‘Home of Australian Road Cycling’. The City of Ballarat looks forward to our involvement in the event and to welcoming the world’s best cyclists to our great city in September.

“We encourage those coming to Ballarat for the Classic to make Ballarat their base during the World Championships.”

The combination of the Herald Sun World Cycling Classic Ballarat and the 2010 UCI Road Cycling World Championships cements Australia’s international reputation as a leading destination for cycling and helps build on the success of the UCI Track World Cup (2008 - 2009) and the annual Jayco Herald Sun Tour and Around the Bay in a Day events. The event also boosts our long term cycling strategy which now includes the 2012 UCI Track World Championships.

“Australia is ranked in the top three nations in world cycling and the performances that have put us there have, for the most part, been played out on foreign shores,” said Cycling Australia CEO, Graham Fredericks. “We’re thrilled that this year our road stars will have the opportunity to wear the green and gold and race against the best in the world at home in front of Australian fans.

“The Herald Sun World Cycling Classic Ballarat is not only a bonus for the cyclists preparing for their World Championships campaign but for fans who will have an added opportunity to see their heroes in action,” he said.

Victoria will be in the international spotlight when the world’s best cyclists converge on Melbourne and Geelong. The UCI Road World Championships stand at the pinnacle of the world cycling calendar, ranking alongside the Tour de France as one of the most coveted prizes in cycling.

It is only the sixth time the race has been hosted outside Europe and will shine an international spotlight on Victoria, Melbourne and Geelong, with an expected global television audience of 400 million.