Jonker gears up to Ride for a Reason against cancer 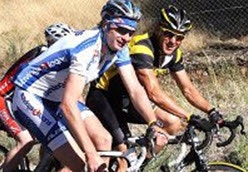 Patrick and the others will be riding as part of the Governor’s 10 team, led by Governor of South Australia, His Excellency Kevin Scarce.

Patrick’s got plenty of reasons to ride against cancer, helping raise an ambitious $1 million for local research, prevention and support initiatives through Cancer Council SA.

“My Grandad, Aunty and Uncle all died of cancer, and thankfully my mother has survived breast cancer,” says Patrick.

“Like many, I seem to be confronted by the impact of cancer on friends and family at every turn – too many to count.

“A great mate of mine, Brendan Johnstone, was diagnosed with testicular cancer at the age of 18 and at the height of his world class mountain biking career.

“He and another guy I was coaching in the US under 23 team last year are thankfully doing much better and in remission from testicular cancer.

“It’s hard for any of us to not be directly or indirectly affected by cancer with 1 in 2 people being diagnosed in their life. Hopefully it makes more of us think to Ride for a reason and honour a friend, loved one or workmate.”

The final ‘Governor’s 10’ Ride for a reason team includes:

Cancer Council SA’s Ride for a Reason campaign seeks to raise $1 million in conjunction with the 2011 Santos Tour Down Under – starting with the registration of 130 fundraising teams which will vie for exciting prizes and opportunities that money can’t buy.

There are a million good reasons to give, so for more information about how to Ride for a reason see www.rideforareason.com.au or phone 1300 65 65 85.
Loading Facebook Like button...