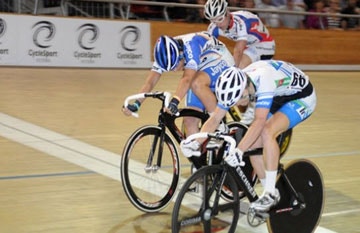 Tasmania’s Luke Ockerby added his name to the Austral Wheelrace winners list after taking out the 113th edition of the world’s oldest bike race in front of a sold out crowd at Thornbury's Darebin International Sports Centre Velodrome Melbourne.

Ockerby, 19, who rode off 60m in the final, took the lead with just two of the eight laps remaining and held off his more fancied rivals and event favourites, Victoria’s Rick Sanders (70m) and South Australia’s Glenn O’Shea (scratch) in a sprint to the line.

The 2000m Austral final field of twenty riders was determined from four heats held earlier in the evening's session, with Sanders and O’Shea confirming their favouritism by taking out their respective heats.

However Ockerby was to strong in the final, becoming the first Tasmanian to win the prestigious event since Darren Young claimed back to back victories in 2002 and 2003.

“It is pretty unbelievable to be honest,” said Ockerby after raising the famous Austral trophy.

“I was pretty surprised by it, I knew someone was there but I didn’t look back, so I was pretty happy when I crossed the line first.

“I thought Rick was going to get there, but he got swamped by the backmarkers on the final lap, and I was just lucky I had a good mark to start off with,” added Ockerby.

Sanders was aiming to become the third in the family to take out the famous event after his father Dave’s victory in 1978 and brother Ben, who took out last year’s Wheelrace at Hisense Arena.

“It was another one of those nights where your lungs feel good and your legs feel good, but everything has to go right in this race to get it,” said Sanders.

“It was tight and hard to get out at the end there and when I finally got out, I just didn’t have the speed at the finish,” added Sanders who will represent Australia at the UCI Junior World Championships in Moscow later this year.

O’Shea, who made a comeback to cycling last month after a long layoff due to illness, was happy to be back racing in his former home state after moving to Adelaide last year to follow his coach Tim Decker.

“It’s always nice to race here at DISC and I am happy with tonight’s race,” said O’Shea, who took gold in the team pursuit at the Australian championship in Sydney last month.

“I was a long away back with two laps to go, but I have never say die attitude and had good run, but was not quite there,” said O’Shea.

The Bendigo native was back on the podium less than an hour later after winning the Victorian elite men’s scratch race championships ahead of Bendigos Jamie Crass and Blackurn’s Brent Nelson.

“I’m still a Victorian,” said O’Shea after receiving the gold medal. “It’s a really exciting time in my life and it’s great to be back on the bike,” he added.

Earlier in the session, Bendigo’s Braeden Dean won the Hilton Manufacturing Junior Austral after a daring breakaway just inside three laps from the finish. He held on to win ahead of Shepparton’s Jay Castles and Blackburn’s Alistair Donohue.

Perkins completed the lap wearing a Richmond Tigers jersey with the number nine on the back, the number worn by his grandfather Vale Polly Perkins who played halfback for the Tigers in the 1940s.

“It gets a bit hairy on the back of a motorbike at that speed, but it’s a bit of fun and I was just running on adrenalin,” said Perkins who reached a maximum speed of 80 kilometres per hour.

South Australia’s Annette Edmondson completed a clean sweep in the women’s events taking out all events on offer including the Victorian’s women’s scratch race championships in sensational fashion.

Edmondson, who claimed the Australian omnium and scratch race crowns at the national championships held in Sydney earlier this month, lapped the field in the afternoon’s combined elite and under 19 race, along with Victoria’s Antonia Abbisogni and fellow South Australian Jessica Mundy.

Edmondson was awarded the gold medal in the elite category, with Abbisogni and Mundy taking gold and silver respectively in the under 19 event. The remainder of the field contested a second race in the evening session, with Victoria’s Laine Hammond and Shannon McCurley crossingthe line first and second to take the elite minor medals, with Caitlin Ward taking the under 19 bronze after finishing third.

In the 'Legends Austral' Stephen Pate, Danny Clark, David Sanders and Laurie Venn, who combined claimed a total of ten wheelraces between 1977 and 1999, put on a great show for the sold-out crowd.
Four-time winner Pate just edged triple winner Clark on the line, with Sanders taking out third place despite being helped midway through the race by son Ben who gate crashed the race, riding on the track mid way through.