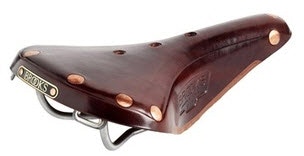 Anyone who has taken a break from riding knows how important a comfortable seat is.

There is nothing worse than being 50km from home and realising that your backside is so sore you can only sit for a few seconds at a time.

Those sit bones take at least as long to harden up, as the bottom of your feet do during summer.

And the only thing worse than that first ride is the second one when you're already sore to begin with.

I've always been a fan of Brooks saddles, and the B17 series is no different. The other thing I love about them is the old school look, it won’t be to everyone’s taste, but I’m definitely a fan.

The B17 Brooks saddle is the most popular of Brooks’ sporty models.

It's an excellent choice for touring, century rides, ultra-marathon rides and other demanding types of cycling.

In terms of riding style, the B17 is perfect for cyclists who set their handlebars about the same height as their saddles, or a bit lower.

All of the B17 models feature bag loops to permit the use of a traditional English-style touring bag.

All in all I was a fan of the B17 Brooks saddle; it's about the best thing to come out of England since, the Spice Girls.