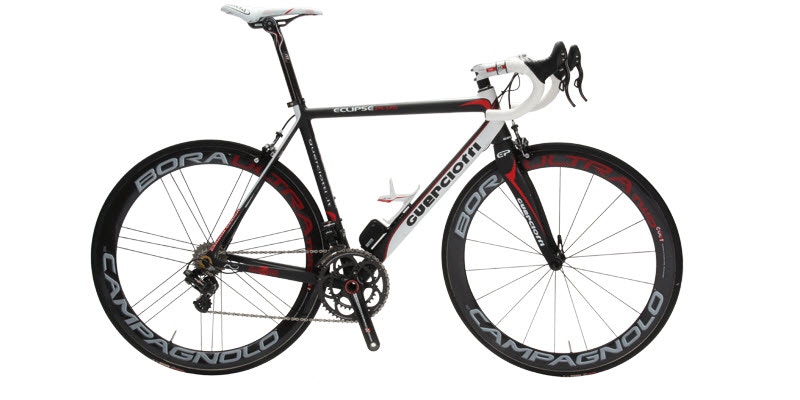 Guerciotti, a brand name naggingly familiar…Giro d’Italia fans would recall it was the frame ridden by Androni during the 2009 race, with Michele Scarponi taking a win on it in Stage 18. Stunning in its appearance, the Khaybar was unfortunately not commonly spotted in stores or bunches in Australia.

Not anymore. Guerciotti has arrived. The Eclipse Plus is their flagship model. Sporting slightly smaller tubing than their previous top line Khaybar and Italian made, it is all the more ‘modern classic’ for it.

The colour schemes within the Eclipse Plus range are impressive, catering for those who want a bit of ‘show’ with their frame (honey bee yellow, striking in the flesh) to others wanting a more stately appearance. My test bike was the black, red and white scheme – a traditionally robust colour combination, handed painted in Guerciotti’s Italian factory.

Geometry is a not ‘industry standard’, with a head tube angle slightly steeper than expected. Guerciotti have though paired it with an appropriate fork rake, as handling was still assured and stable – even through the technical and gusty descents.

The matching build kit was also not only impressive in terms of aesthetics but made the Eclipse Plus a pleasure ride. New 11 speed Dura Ace 9000 and Mavic R-Sys SLR wheels. Clinchers, but will fool all but the closest observers (or those that already know!) for being tubulars, complemented the frame perfectly. I have had certain wheelsets that are great in one bike, but really not ideal in others. The Mavic’s were a great match, combining with the frame to provide a ride that at no point ever left me feeling ‘beaten up’.

This was not to say the bike lacked stiffness. First ride, first hill and I was thinking “gee, this feels stiff…”. Stomp on the pedals a few more times “and light!”. Scales confirmed 6.9kg with Speedplay pedals and bidon cages. Everything you would need to ride, not a single weight saving component, and a mere 100g over the minimum UCI regulated bike weight. Yep, it was light! For a 76kg rider who doesn’t excel on hills, the impressive degree of rigidity and light weight left me grateful and impressed.

Guerciotti have engineered a frame that caters not only for those who like to enjoy their riding and with no big plans to race, yet is just as suited to those looking for the next machine to carry them to victory in State Open races.

RRP on the Eclipse Plus tested comes in at $11, 899 – which, given the top line spec, is less than other Italian manufacturers. When you also consider Guerciotti has close to half a century of frame building history behind them, it offers an opportunity to step on board a machine with a fantastic pedigree and the added bonus of still being one of a few you’ll see in the Saturday bunch ride. Well, until word gets out that is.