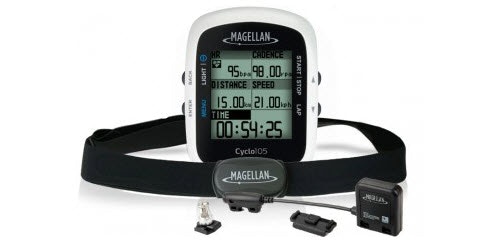 It is pretty rare as a cycling reviewer I am presented with a product that I had no idea about. Especially when the company is one like Magellan, who have been in the GPS navigation business for over two and a half decades and have now partnered with Navman.

Yet surprised I was, as I was handed a Cyclo 105 cycling computer to review.
First impressions of the Cyclo 105 were great. Slim, nicely variable backlit screen and a USB port under the device with a secure rubber tab. Crucial to prevent water, sweat or moisture of any kind from getting inside the computer.
The mount to attach the Cyclo to the stem was also simple and secure – two zip ties and a one third turn twist attachment. Removing took a little more force. Not a negative, I have heard of enough riders losing their computer, after it has jiggled loose, to be happy with mine being more secure than not.
Functionally the Magellan does everything you would look for. Pairing with my ANT+ heart rate strap and power meter was easy. Distance, compared to two other cycling computers I ran at the same time, was accurate – as was elevation.
Navigation of the user interface does not take long to figure out; helped by the logically (and alphabetically) organised sub menus. Buttons also passed a test that those residing colder climates appreciate the value of – being that they were still easily used with full finger gloves on. Nothing worse than trying to press tiny, unresponsive, buttons when wind chill has the temperature well in to single digits. The Cyclo 105 did not suffer from this in the slightest.
I race a lot of time trials and am a bit of a ride data ‘geek’. Knowing what speed, power average, distance and such are important. The Magellan easily allowed enough screens and data fields to cover all I required – and was additionally so slim that it was barely noticeable on my aero bar mount. I could even choose to have the display in portrait or landscape mode. Perfect!
Uploading rides to the Magellan Desktop PC Tool was also simple and quick – as is uploading to sites such like Training Peaks or Strava. Ease of use is paramount in these situations and Magellan makes it hassle free.
The unit also has a fully programmable workouts function, breadcrumb trail navigation and an impressive battery life (for those who don’t upload after every ride). In fact, even with backlight running the whole time, I was surprised how little charge my rides consumed.
In all the Cyclo 105 left me not only impressed but relieved that there are alternatives within the cycling GPS market. If you are looking for an upgrade or an alternative to what you presently have, the Magellan is well deserving of a closer look.
Reviewed by Nick Squillari
Search for the Magellan Cyclo 105 GPS
Loading Facebook Like button...