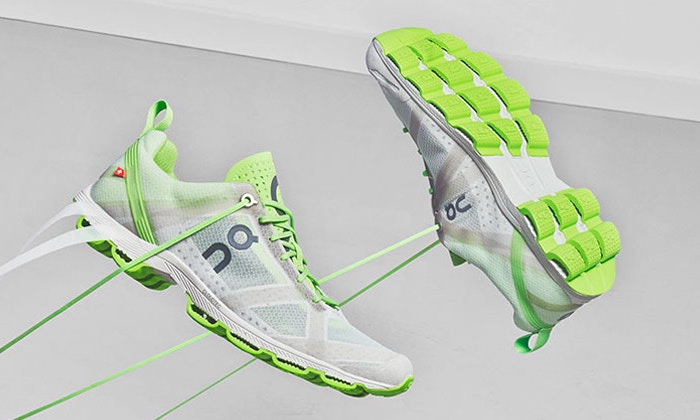 The humble garden hose, it would appear, has a lot to be thanked for when it comes to the modern runner.

Believe it or not, it was used in one of the earliest iterations of ‘On’, a running shoe designed by former pro triathlete Olivier Bernhard and his mates David Allemann and Caspar Coppetti.

Whilst still a pro, Bernhard was dealing with the regular frustration of chronic inflammation of the Achilles, and was convinced that a running shoe could be part of the solution. He just couldn’t find the right one. To cut a long story short, he met an engineer at Zurich’s Federal Institute of Technology (as you do) and they set about researching and developing what they wanted to become the ultimate running shoe.

Founded in 2010, On looks like an overnight success story but in actual fact, these shoes were at least five years in the making. Listening to the team at On, the mega difference is in the feel. Rather than providing vertical cushioning alone, On runners provide vertical and horizontal cushioning by way of sole ‘clouds’, which on profile do look a little like some kind of into-the-future strips of garden hose. But this technology is now leap years from its humble origins.

For all you athletes out there who thrive on speed, let’s look at On’s Cloudracer.

The Cloudracer model boasts 18 of these ‘clouds’, which aim to give the runner cushioning whilst still keeping the foot low to the ground (so the earth can be felt beneath the sole). Its slimline model works to keep the weight down, which complements Cloudracer’s profile as the racing baby in the On range.

The concept of taping the foot’s trouble spots has been adopted by the Cloudracer and translated into a skeleton-design that helps hold the foot. A ‘Speedboard’ feature is all about improving the efficiency of the running gait by delivering a trio combination of flex, energy distribution and torsion guidance, making this a highly responsive shoe for the runner who really wants to feel the ground, but get all the support and cushioning as well.

And it shouldn’t be about looks, it really shouldn’t, but it has to be said that what makes the Cloudracer especially cool is that it just doesn’t look like a traditional, boring, bulky serious running shoe. It’s sleek, slim, fresh and that poppy green palate actually works. Watch it fly!