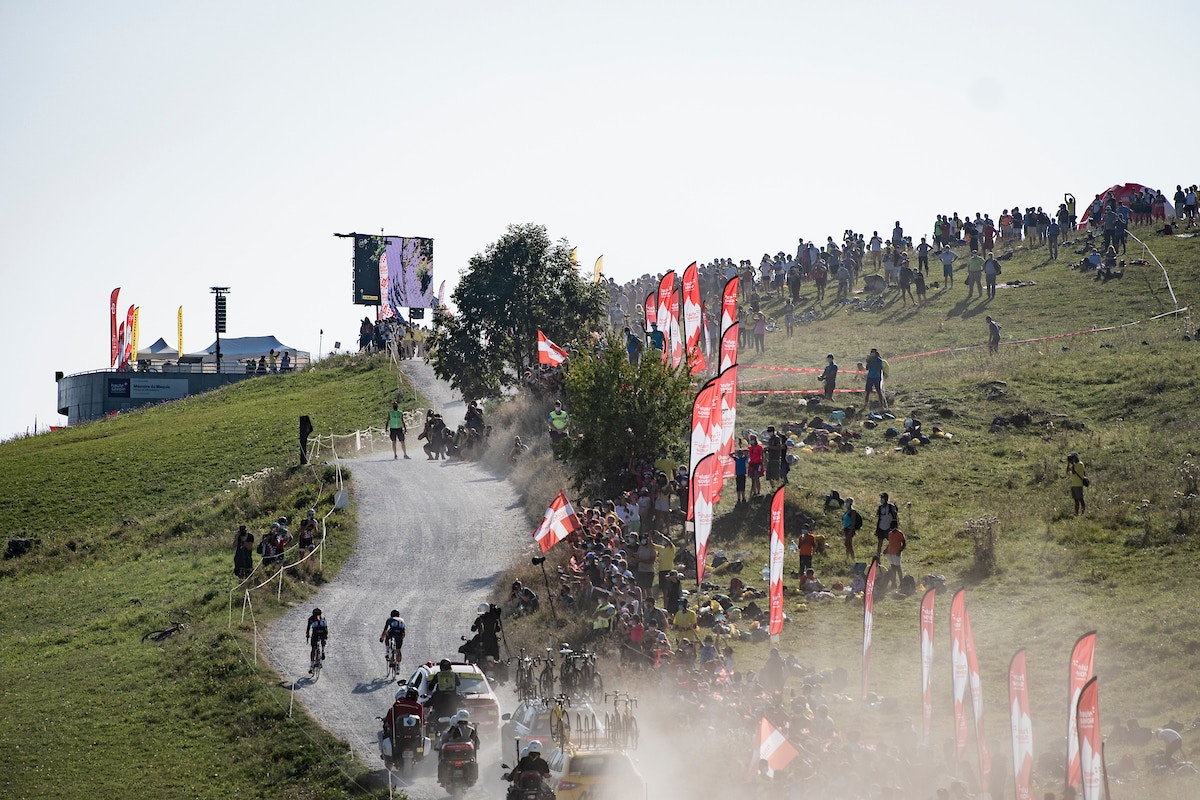 Michał Kwiatkowski crossed the line with his arm around Ineos Grenadiers teammate Richard Carapaz to conclude stage 18 of the 2020 Tour de France.

“It was some day,” the Polish former world champion said. “I can’t describe how grateful I am to the whole team and as well to Richard. It was an incredible day for us and I will never forget that. You know, I get some nice moments in cycling but that was something, a new experience. I’ve got like goosebumps for the last kilometres because I know the gap is so big we’re going to make it. Both of us really enjoyed the last kilometres. That’s incredible.” 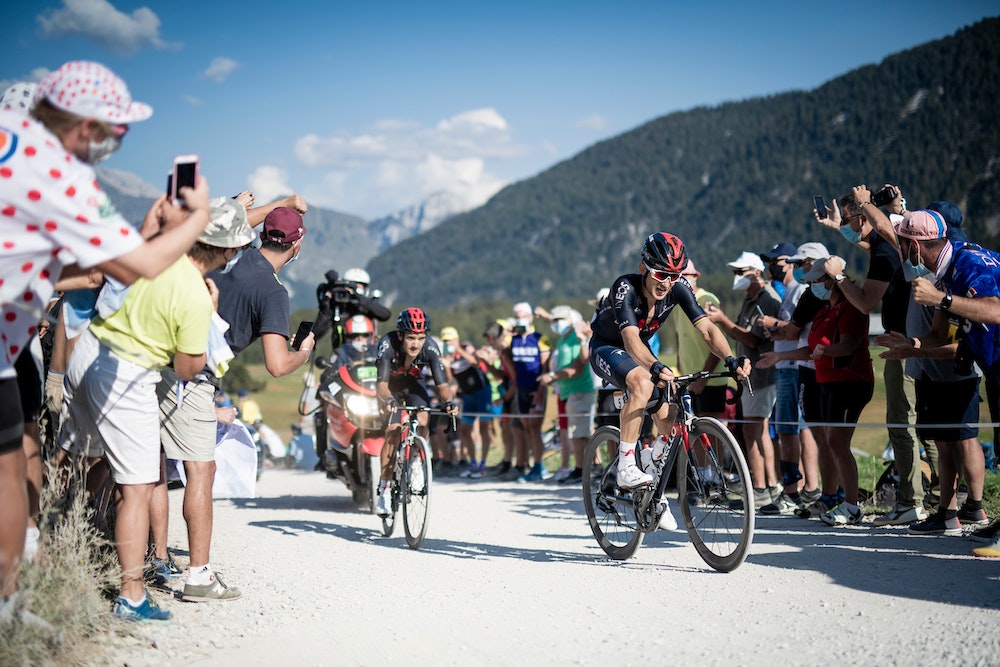 There was no way to initially discern who won the stage, however, Carapaz — who won the 2019 Giro d’Italia — deferred to the former world champion, letting Kwiatkowski roll across the finish line first.

Carapaz, with several well-timed and strategic attacks, took over the lead of the KOM competition by just two points and wears the polka dot jersey after the stage.

A short gravel section after the top of the last categorized climb was decisive in the stage, as it caused a shakeup in the general classification, and even momentarily set Tadej Pogačar on the back foot, while detaching Richie Porte from the yellow jersey group, forcing the Australian to chase hard for his fourth position.

Richie Porte appeared to puncture on this gravel sector and was gapped from the yellow jersey group, putting his fourth-place position into jeopardy.

Sensing an opportunity to advance his overall standing, Mikel Landa (Bahrain-McLaren) attacked, and was virtually ahead of Porte, until Porte got a wheel change and went into full-gas mode, riding back onto the yellow jersey group helped by Tom Dumoulin and Wout van Aert.

On the road to the finish 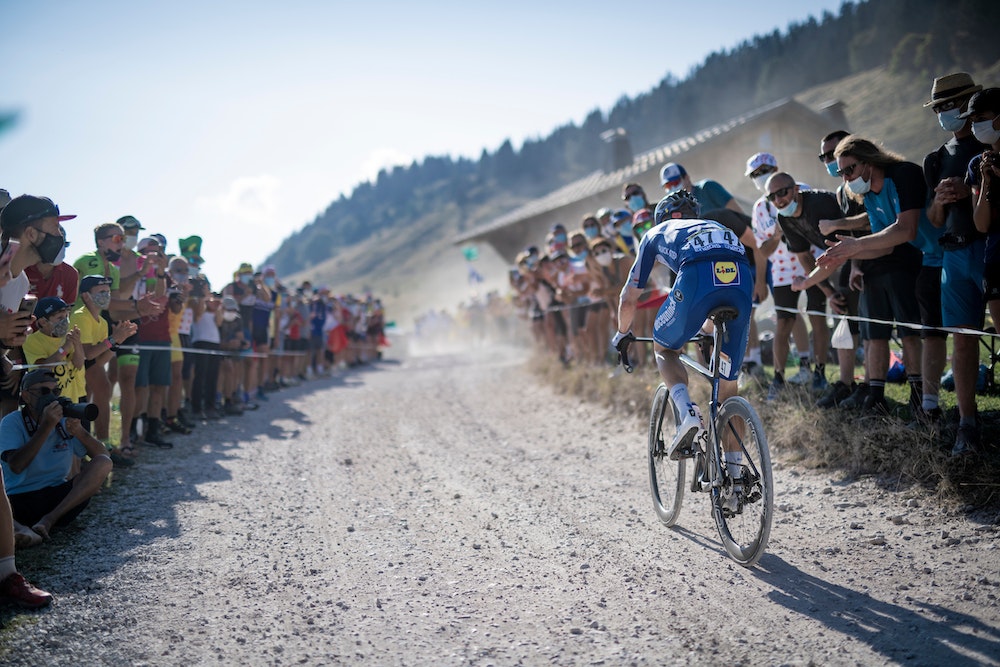 Sprinter Andre Greipel abandoned during the stage, which featured the most elevation gain during any single stage in this year’s tour.

At 100km to go, the situation on the road was a five-man break of Pello Bilbao (Bahrain-McLaren), Richard Carapaz and Michał Kwiatkowski (Ineos Grendadiers), Nicolas Edet (Cofidis), and Marc Hirschi (Sunweb).

Carapaz and Hirschi traded attacks for KOM points throughout the day, minutes ahead of their pursuers.

Hirschi slid out and crashed on a descent inside of 60km left. He quickly remounted and rode with his left shift lever notably askew.

Kwiatkowski later commented on this crash, “Yeah, [Hirschi] was fighting against Richard [Carapaz] for the polka dot so when he took that risk and he corner way too fast I was just behind him and when I saw that I just went on my brakes and in that moment I think it’s better to go 99 per cent and stay safe than to risk so much on the descent. He wasn’t keen to work before so we wanted to do our own race and not look behind.”

After the crest of the next climb, Col de Aravis, a short white gravel sector, reminiscent of Strade Bianche shook up the race.

The two Ineos Grenadiers cemented their lead, further distancing themselves from Bilbao, while Edet gave up and faded back.

Coming into this climb Landa attacked and took teammate Wout Poels with him. This attack further distances Rigoberto Urán from the yellow jersey group.

The Bahrain-McLaren riders made their way up to teammate Damiano Caruso, using him as a springboard to try to get further distance on Porte, trying to leapfrog him in the standings.

Through the gravel road sector, Enric Mas (Movistar) attacked from the yellow jersey group to try to pry the white jersey from Pogačar.

The younger Slovenian responded, as did Roglič, but then Pogačar seems to momentarily falter.

With daylight between them, Roglič goes on the attack and separates himself from Pogačar. 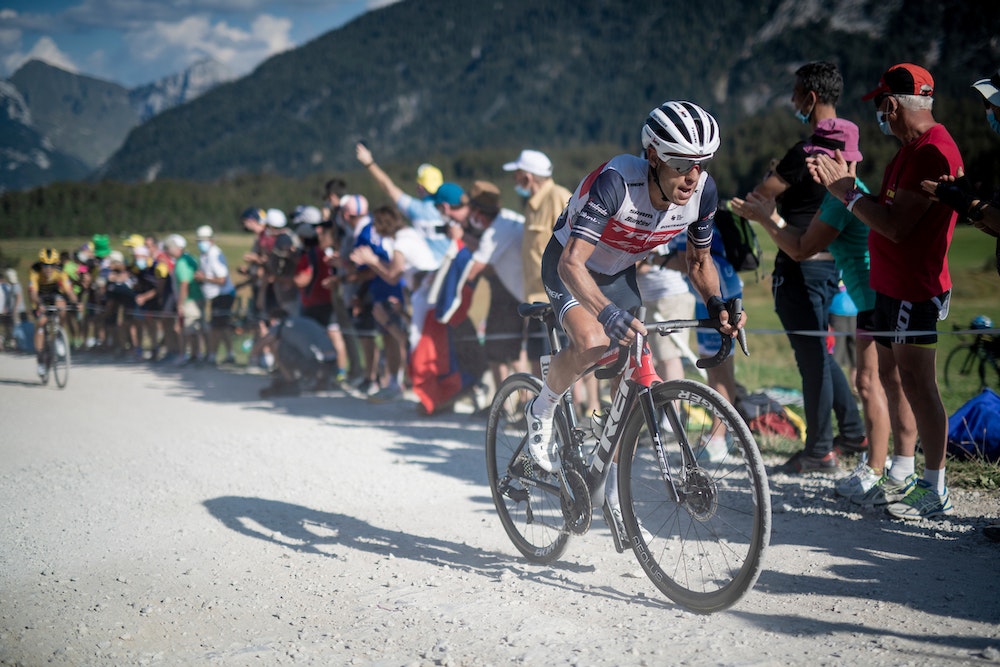 Porte suffered a flat and now trails by nearly 47 seconds while Sepp Kuss was separated from team leader Roglič.

The American was able to reconnect to guide Roglič and keep an eye on his rivals.

The Trek-Segafredo rider Porte spent the following 10km chasing back on to the yellow jersey group, in an effort to preserve his fourth place in the general classification.

Up the road, the two Ineos Grenadiers enter the final few kilometres, soft-pedalling with a sizable lead, while behind them Landa has moved from seventh place to fifth place in the GC.

At the line, Carapaz deferred to Kwiatkowski, letting him roll across the line a wheel-width ahead.

Shortly after, Wout van Aert, wanting to deny Pogačar — who had reconnected with the yellow jersey group — any bonus seconds sprinted for third place on the stage.

Pogačar leads Roglič into the finish by half a bike length, still showing a bit of fight.