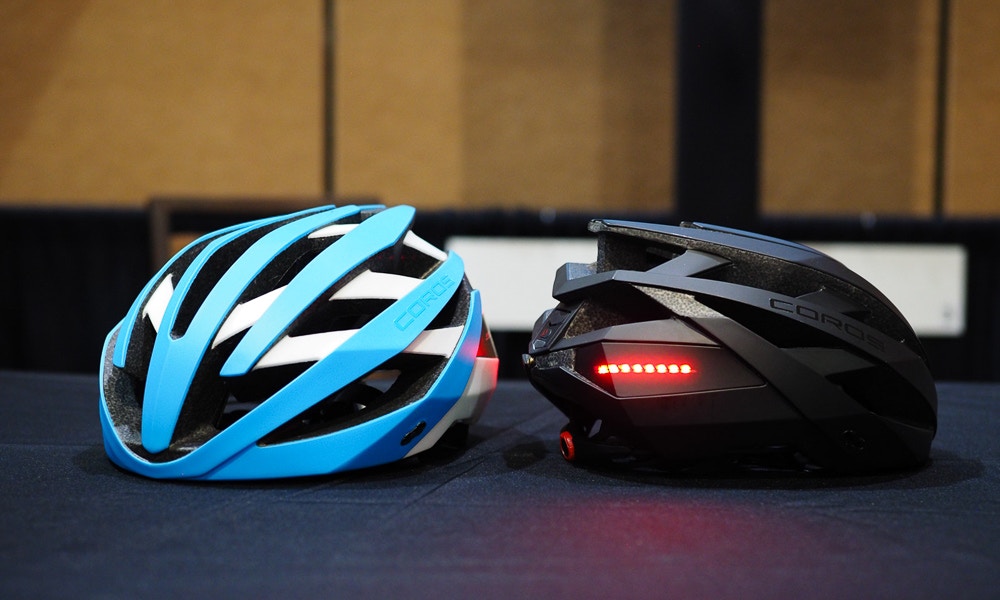 Just one short year after bringing it’s Frontier Smart Helmet to market, innovative accessory manufacturer Coros are at it again with a new iteration of its do-it-all Smart Helmet. The first iteration (dubbed the Linx internationally) was largely applauded for delivering the first of its crowd-funded goods on time, as well as delivering on most of the tech fronts it promised so much on.

Featuring a redesigned weight relieved shell, updated bone conduction speaker system and a host of new safety features, the updated Coros Omni looks to be a solid update over an impressive entry to the market for Coros. With thanks to IICO, the Australian distributor for Coros, we set about putting the Omni through its paces to see if it can indeed improve upon its predecessor.

Doubling Down on the Tech 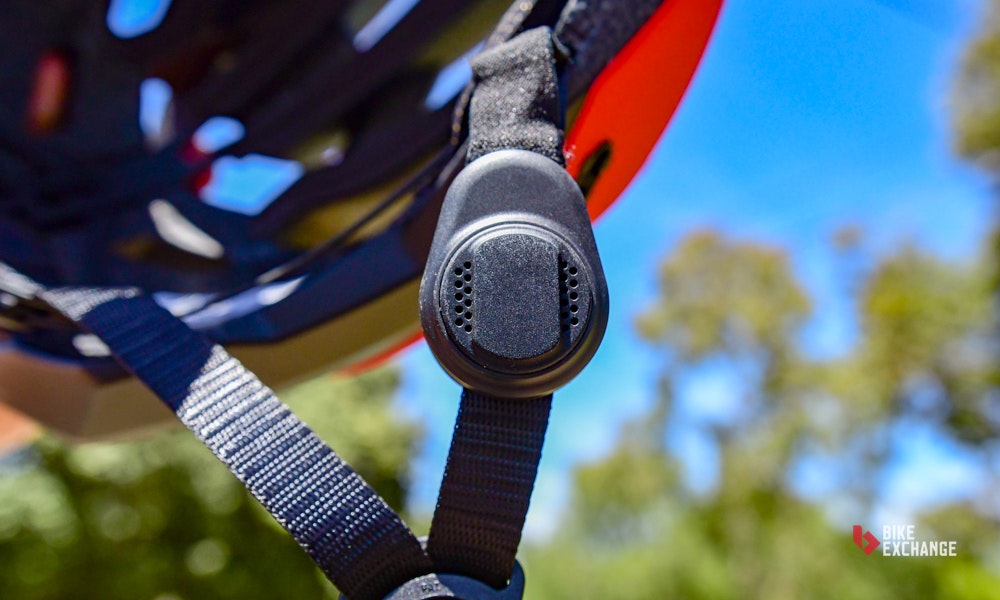 Much like its predecessor, the Omni is loaded with tech, all working together to ensure a safe and entertaining ride.

The addition of the tail lights is perhaps the more important addition to the Omni. The fact that they are light sensing means that riders will typically only have to toggle them on and off, with the sensors taking care of the brightness to ensure that riders are safe and seen out on the road.

The increased quality of the speakers ensures that music playback out on the road is at least audible, something that was missing from the previous iteration. The technology is still not without its flaws however, whilst the speakers are an improvement over those found on the Frontier, if you are a closet metalhead like myself, or listen to music with excessive treble in the track, it tends to get lost in the wind noise experienced when riding at speed on the road. Spoken word clarity remains a strong point, which working in tandem with the wind resistant microphone, ensured I was never hard of hearing fielding phone calls whilst out riding. 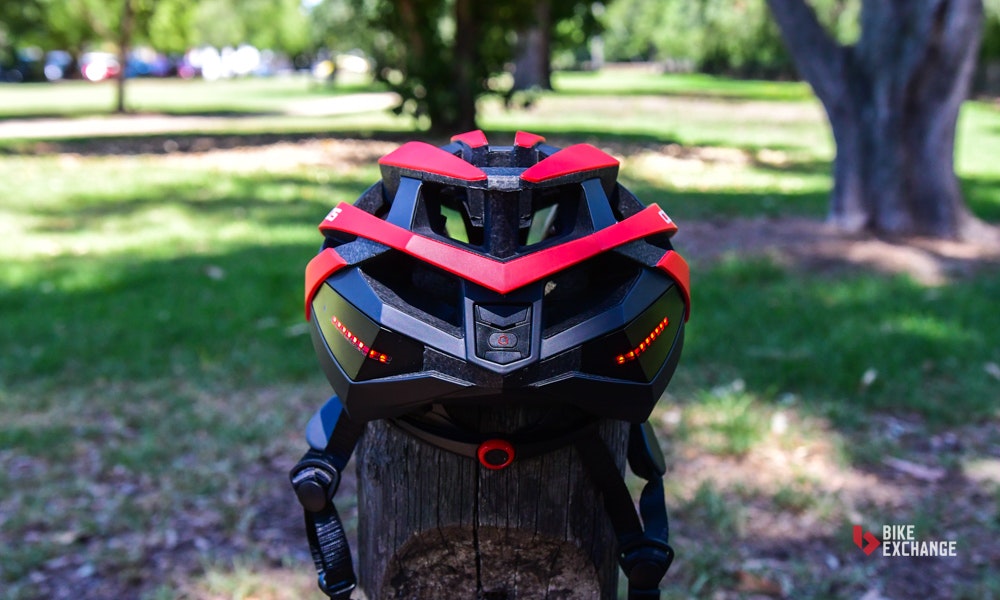 Battery life on the Omni is a strong point, with our test unit lasting in excess of the manufacturer claim of 8 hours with music playback. Granted I didn’t have music playback the entire testing period, however, I was receiving regular phone calls and making the most of the pace notes fed to me by the companion app every 5 km throughout a ride.

Charging the helmet upon battery depletion is a simple affair with a single micro-USB port located at the rear of the helmet behind a dust and water-resistant rubber housing. A full charge from completely empty took around 3 hours on our test unit. 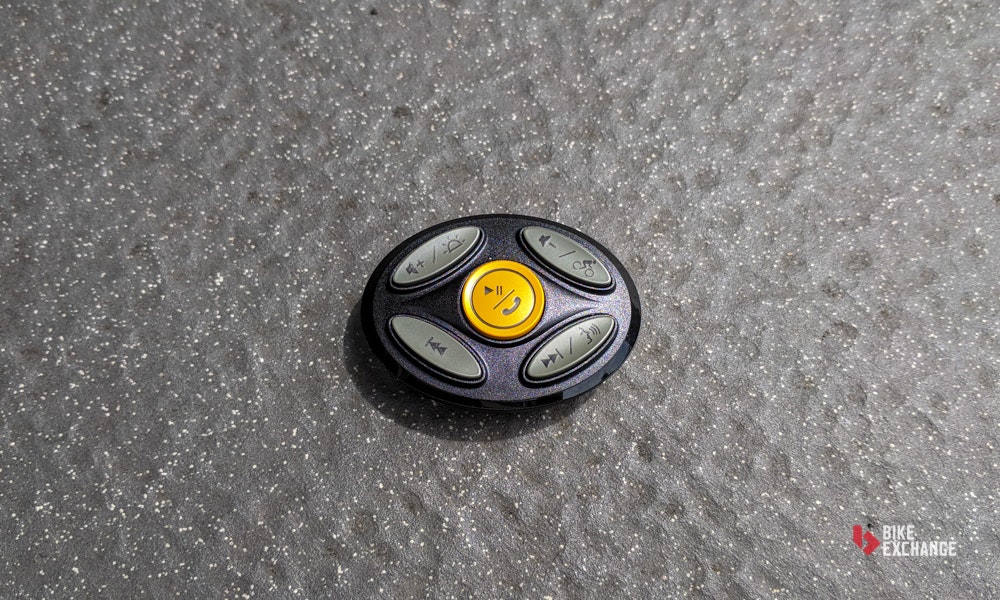 For 2018, Coros have updated both its standalone app, the handlebar mounted remote to include a number of different features.

With regards to the controller itself, there’s little denying that it is going to be useful to the vast majority of Coros wearers, especially those planning on fielding phone calls as there is no other way to answer a phone call, save for pulling over and physically answering your phone from your back pocket. Whilst I wasn’t a fan of the remotes aesthetics on my minimalistic road bike cockpit, it serves its purpose well. 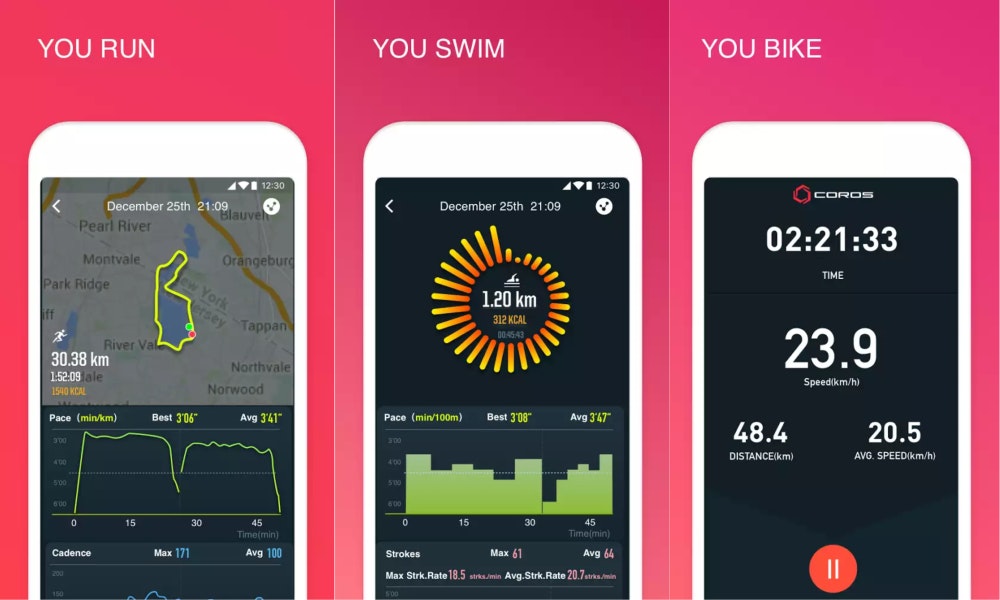 The redesigned app has moved away from being cycling specific and into a multisport tracker. This hints at a move into the fitness tracker space for the company with rumblings of non-cycling related tech on the horizon coming out of the Consumer Electronic Show as reported by our mates at CyclingTips.

Sadly the app itself remains the weakest part of the Omni package in my opinion. Whilst there has clearly been some effort put into making the companion app look polished, sadly this does not translate to its functionality. I found it clunky and slow to react to my input commands as well as inaccurate when tracking rides. I’m sure the majority of these issues could be solved in a few updates by the developers of the app, but for now, third-party apps such as Google Maps for navigation and Strava for ride tracking are still your best bet for accurate information capture and navigation. 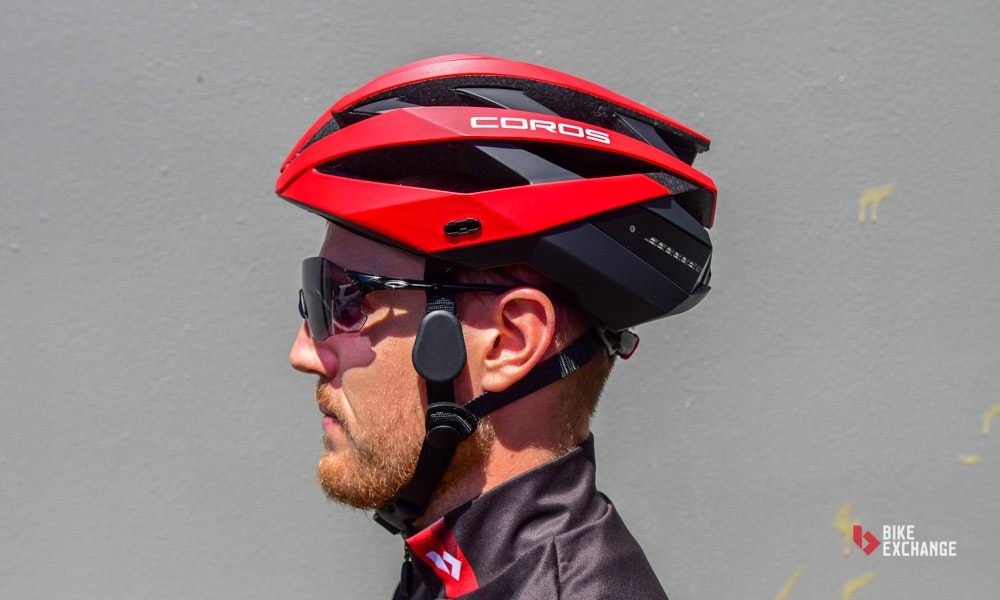 Slide the Omni out of its box and first impressions for the updated smart lid are certainly positive. Sporting an updated aesthetic the new helmet looks just as sharp as any other high-end ventilated lid currently on the market, certainly an improvement over the outgoing model in this regard. In the box with the lid is a quick start guide, charging cable, remote with mount and a visor for MTB riders wanting to look the part, or roadies looking for an integrated way to keep the sun out of their eyes.

The interior shape of the Omni appears to have been updated somewhat from the previously, with an updated retention system outback and revised padding on the interior, the helmet should fit most peoples’ dome quite well. The padding on the interior is a slight let down however, with a lack of padding at the rear of the helmet, where the majority of the weight is, not providing the same level of comfort as the outgoing model. 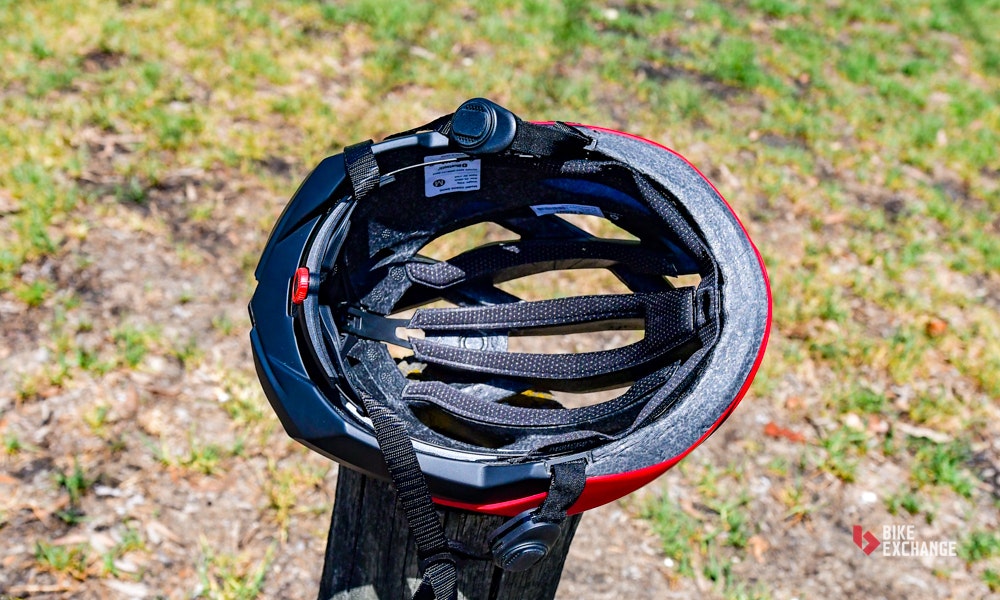 Manufactured utilising a polycarbonate shell and EPS impact foam, the Omni has AS/NZS 2063 safety standards and is available in both Medium (54-58cm) and Large (57-61cm) sizes, so those with a particularly small head may miss out on all that the Omni offers.

The Omni has also shed around 100 grams compared to its predecessor, with our size Medium test unit tipping the scales at 356g, a little over the 340g claimed weight by Coros. Whilst they may seem on the hefty side to some, it's worth noting that at no point during the testing period was the weight a burden on my neck and shoulders, despite riding with the helmet on for in excess of 2 hours as time.

The light sensitive LED tail lights gave me an extra sense of safety out on the road, particularly useful given I generally tend to ride at early hours of the morning on sunrise however, I would’ve liked it if the LED lights themselves were a little brighter for the purpose of using the lid as alternative to a daytime running light. 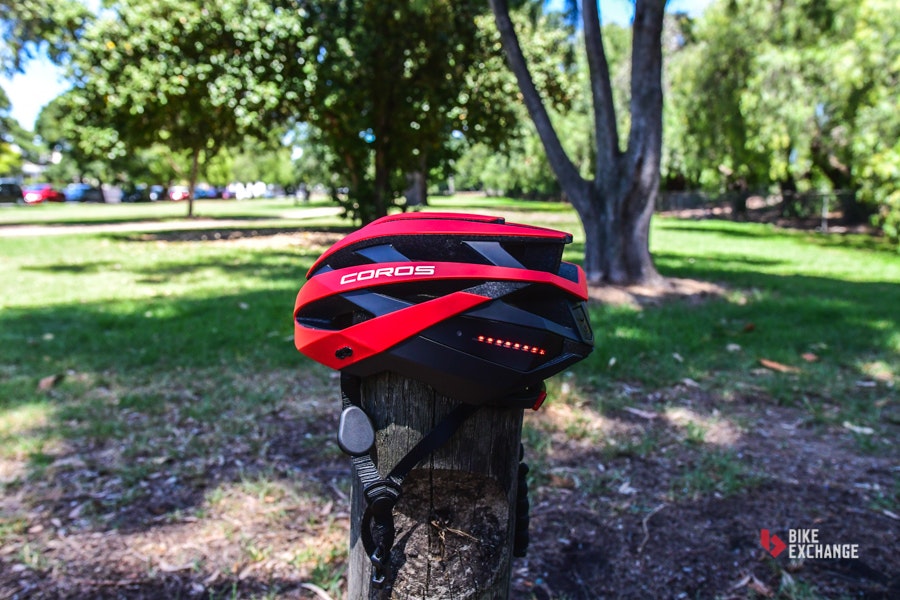 Whilst the Omni is loaded with smart features and tech, it is important to remember that it’s fundamentally a safety device for your noggin. So has the tech spoiled what is essentially a safety device? No, but not a resounding no. Whilst the ability to listen to music and communicate on the ride is neat, it’s not without its distractions. I needed the music quite loud for it to be audible at a constant 32-35 kph speed. This made me less aware of my surroundings, for example, only noticing traffic once being overtaken, leaving little time to react or move if there’s a tight shoulder.

The Flipside to this is that the Omni, with its visor as standard and updated aesthetic means that the helmet is no longer directed solely to hard and fast roadies, rather as an everday option for roadies, commuters and MTB riders alike. 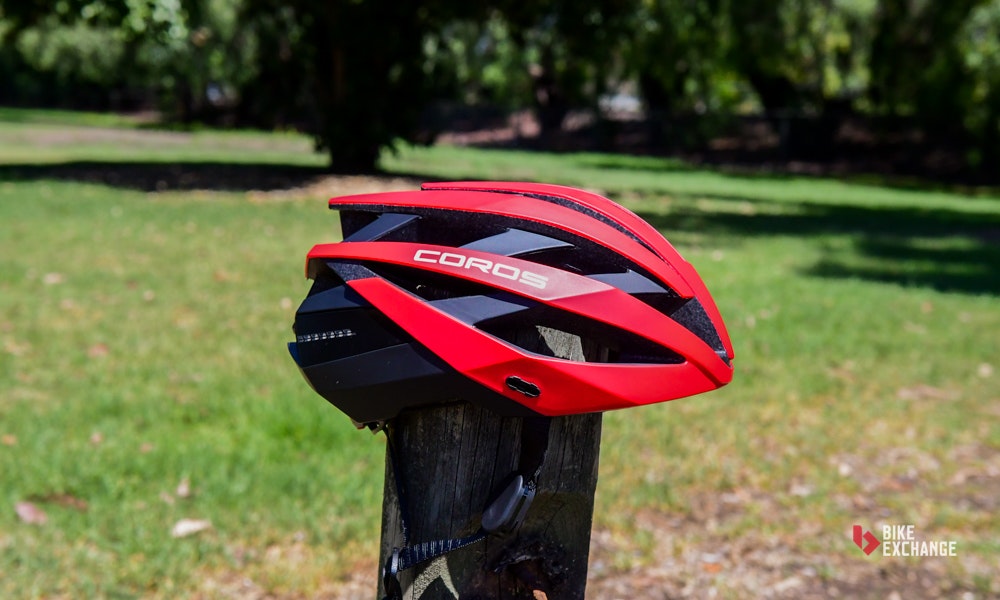 It seems that Coros have listened to the feedback from its customers and righted quite a number of shortcomings that plagued the Frontier. On the whole, there’s a lot to like about there’s a lot to like about the Omni. The updated aesthetic gives it a more premium feel, the updated speakers are a big improvement and the additional safety features show that this lid is just as much about rider safety as it is an entertainment and communication device.

So regardless of whether you’re a podcast on a long ride type rider, or a rider that uses music up long climb to take your mind off the suffering in your legs, if you enjoy audio whilst riding without cutting yourself off from your surrounds the Omni and is definitely worth considering.

The Coros Omni is available in Australia right now in both Medium (54-58cm) and Large (59-63cm), in a number of colours including Matte Black, Red, White, and Blue with an RRP of AUD$269

Thanks to IICO for providing the helmet for this test. IICO are the Australian Distributors of Coros Helmets, for more product information visit www.IICO.com.au